Our dear friend Rob is buried in deep deadlines, and allowed me to take over his blog today to talk about one of my favorite television shows.

I’ve been pleased with the quality of the new crime shows on television these past two years. I’ve long grown tired of the CSI franchise, irritated with Criminal Minds practically since the beginning, and while I still enjoy Law & Order SVU, it doesn’t have the same energy. And the idiot power that be cancelled one of my favorite series after two seasons, LIFE. The “classic” crime shows don’t have the edge, or they’re sorely outdated.

DARK BLUE and DETROIT 187 – both of which I downloaded because of comments on this blog – are fantastic. I edge to DETROIT because some of DARK BLUE feels unreal (and I don’t like the FBI Agent Alex Rice from Season Two-I still have three episodes to watch, so no spoilers-but I’m kind of hoping she gets killed off, or we find out she betrayed the team-which I think she planned to do all along. I just don’t trust her.) But both shows have terrific characters, and that is ultimately why I watch television. 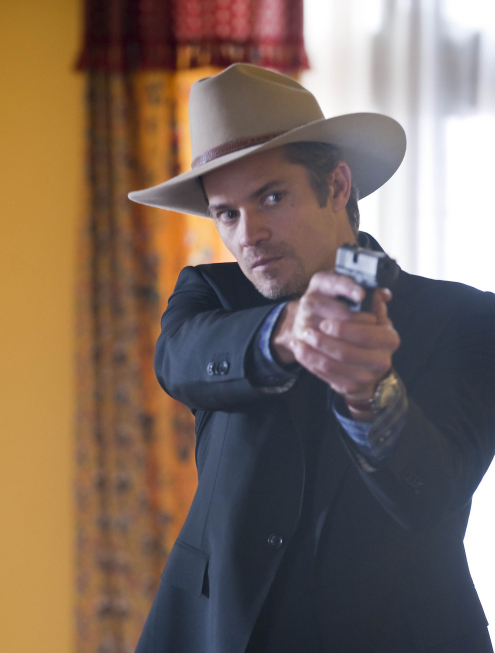 Last year, I was surfing through iTunes and found a new show called JUSTIFIED, an F/X original program. It starred Timothy Olyphant (who I loved in DEADWOOD), and at the time there was only a couple episode that had aired. I was surprised I hadn’t heard of it, but I bought it for two reasons: it was based on a short story by Elmore Leonard, a consultant on the show, and starred Timothy Olyphant. (Whoops, I already said that.)

(As an aside, Timothy Olyphant is welcome to play nearly any of the heroes in my books, but I’m partial to him as Gallatin County Sheriff Nick Thomas who, in SPEAK NO EVIL, is a fish out of water in San Diego as he sets out to prove his brother is innocent of murder. Or Sheriff Tyler McBride, also in Montana, from TEMPTING EVIL. Or FBI Agent Mitch Bianchi from PLAYING DEAD. Or . . . well, he’d fit many of them. Just saying.)

I remember watching the pilot, not really knowing what to expect, only to be floored by the best five-minute opener of any television series I’ve seen. I was more than hooked; I became an evangelist for the series. I remember emailing our Toni and telling her she had to watch it. She’d turned me onto LIFE; I had to return the favor.

JUSTIFIED is based on Leonard’s character US Marshal Raylan Givens and the short story Fire in the Hole which is currently a free read on the HarperCollins website. (A bit of trivia-well, maybe everyone here knows this, but I didn’t until this afternoon, but Leonard-who writes all his stories with pen and paper-wrote Fire in the Hole for the e-book market in 2001.) 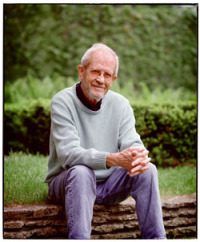 Leonard is pretty amazing-over three dozen books, a Grand Master of Mystery Writers of America, and now consulting on JUSTIFIED. His advice to writers is legendary: “Leave out the parts everyone skips.” But my favorite is, “If it sounds like writing, I rewrite.” Which reminds me of another quote-though I don’t remember who said it-“It’s not easy to write a book that’s easy to read.”

The show has the same sharp, story-driving dialogue that Leonard is known for. The timing is perfect, the actors amazingly well cast, and the setting is itself a character. Nothing is wasted, a good lesson for writers.

The pilot episode follows the short story fairly closely, except for the end. In the story, Boyd Crowder dies. In the television show, he’s redeemed. 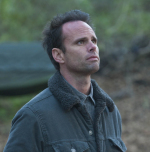 Raylan Givens (Olyphant) is the star, but first I’m compelled to talk about Boyd Crowder (played by Walton Groggins). When Crowder is introduced, he’s the villain. A racist who blew up a black church-or is he? Why he hit the church with a rocket launcher isn’t as clear-cut as it seems in the beginning. Crowder is definitely bad news. He has a mail-order ordination and quotes (and misquotes) the Bible to justify his white supremacy. His father Bo controls the drug trade in the area, and is working with a nasty cartel. But as the season goes on, Boyd has (possibly) a complete change of focus.

What is so fascinating about Boyd is that the writers on the show redeemed a despicable character in an amazing and plausible way. We, the viewers-and Raylan Givens, who worked with Boyd in the mines-are skeptical of his change of heart. Even now, I’m not certain, but I want him to be redeemed.

I’d read last year that Groggins wasn’t supposed to become a continuing character, but after the pilot the chemistry between Olyphant and Groggins was so amazing, that they kept him on.

Raylan Givens. His ex-wife (and I hope she stays his ex-wife because I do NOT like Winona) told him in the first episode that he was the angriest man she’d ever met. And his anger simmers under his skin, giving him a perpetual brooding appearance. Where Boyd Crowder is a complex character, Raylan Givens is not. I wouldn’t call him simple, either. There is also a strong cast of supporting characters from Nick Searcy as Chief Art Mullen to the other two US Marshals in the office (Jacob Pitts and Erica Tazel) to the other Crowders, and even Winona (though I don’t like her character, the actress, Natalie Zea, is good.)

In the first season, Raylan spends his time split between protecting Ava Crowder (Joelle Carter) from the rest of the Crowder family, and handling his cases. (I read somewhere that Ava was “self-widowed” which I got a kick out of -she killed her husband, Boyd’s younger brother Bowman, while he sat at his dining table. Some might call Ava a battered woman-and she certainly was when Bowman was alive-but I call her a survivor. I didn’t like her at the beginning of the show, but she grew on me for two reasons: first, she doesn’t pretend to be someone she’s not. She’s not stupid, but she’s uneducated, and while she would be safer leaving Harlan, it’s the only place she knows. And second, she will stand up for herself–at least now she does. She’s scared, but she won’t be chased from her home. She doesn’t always make the right decisions, but she’s not conniving or playing some game. What you see is what you get. Which, ironically, is a lot like Raylan.) 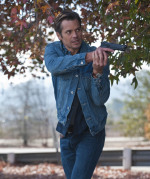 Raylan isn’t perfect. He doesn’t always make the right choices. Sleeping with Ava Crowder when she’s the only witness in his shooting of Boyd Crowder wasn’t a smart move, and set up a lot of the conflict in the first season. The second season starts where the first season left off-but new viewers can hop right in. You’ll get a sense of the first season, but the opener introduces a whole new-level of home-grown bad guys. The last person on the planet I’d want to piss off is Mags Bennett (played by Margo Martindale.) She makes Bo Crowder look like a kitten.

I could talk on and on about the tight plotting, the fantastic choreography, the setting, the action-but I can’t do it justice. You’ll just have to see it for yourself. If it sounds like I’m doing the hard sell, maybe I am. All my favorite shows tend to get cancelled after a season or two, and I’m doing my level best to ensure that JUSTIFIED has a third season.

When it comes to fighting the bad guys, there is no one you’d want on your side more than Raylan. While I wouldn’t call him simple, he’s straightforward. We know how Raylan will react. We know what he’ll do. And we know that it’ll be justified.

Raylan: Alright, I tried to be reasonable. You give me your word in ten seconds or I shoot you in the head.

Reyes: My God, she needs a doctor.
Raylan: She’s needed one for a while, but I don’t think these next two minutes are going to kill her.

Raylan (to sex offender): Normally, I would’ve just shot you myself the second you pulled, but I am doing my level-best to avoid the paper work and the self-recrimination that comes with it, though Lord knows you’re the kind that makes it worth it more.

Raylan (to his father, Arlo, a criminal): Sometimes we have to make deals with lowlifes because we have our sights set on life forms even somehow lower on the ladder of lowlife than they.

Ava: Didn’t the district attorney order you to stay away from Boyd?
Raylan: It was more of a suggestion.

Raylan: I wasn’t in a shootout, I was just near one.

Raylan: I shot people I like more for less.

Winona: You’re a little old to be fighting, aren’t you?
Raylan: Certainly too old to be losing.

Bo Crowder: Howdy Marshall, I sure am glad you could join us
Raylan: Oh, no, no, no. I’m not joining you. You were just leaving.

Hanselman: Next time you’re in Cincinnati, come by the gallery, I’ll show you my collection. I think you’ll be quite surprised.
Raylan: Honestly, I’d rather stick my dick in a blender.
Chief Mullen: Well, that would solve a few problems.

US Marshal: How’s Winona?
Raylan: Oh, she’s still happily married to someone else, thanks for asking.

Raylan: If you’re going to talk, I’ll put you in the trunk and drive myself.
Dewey: I can’t drive handcuffed to the damned steering wheel!
Raylan: You’ll get the hang of it.

I’m in a really good mood after watching a bunch of clips from JUSTIFIED in preparation for this blog (grueling work, I know, watching Timothy Olyphant all night. As an aside, I saw on Elmore Leonard’s blog that two-thirds of JUSTIFIED viewers are men, and I’m like, WTF? I think every romance writer on the planet watches the show, if the status bars on Facebook are any indication.) If you haven’t seen the show, watch it. Download it to your computer or buy the DVD ($22.99 on iTunes; $19.99 on Amazon.) I’m giving away a DVD set of Season One-just comment below. If you haven’t seen the show, tell me if you want to see it-and what is your favorite show so far this year. And if you have seen it, do you have a favorite episode or quote?

In case you missed it, here’s the Superbowl commercial promoting the series–it’s pitch perfect.

And here is the Season 2 teaser