This is a truly misleading topic for me, because while I have an office, a beautiful, private, somewhat comfy office, I rarely use it to write. I’ve spent the past four years writing on a laptop, which means I’m basically a nomad. I can write anywhere in the house – upstairs, downstairs, in my office, in the bonus room. But 90% of the time I write in the living room. Which is a shame, because I do love this desk (and yes that is a bat dangling from my fan…) 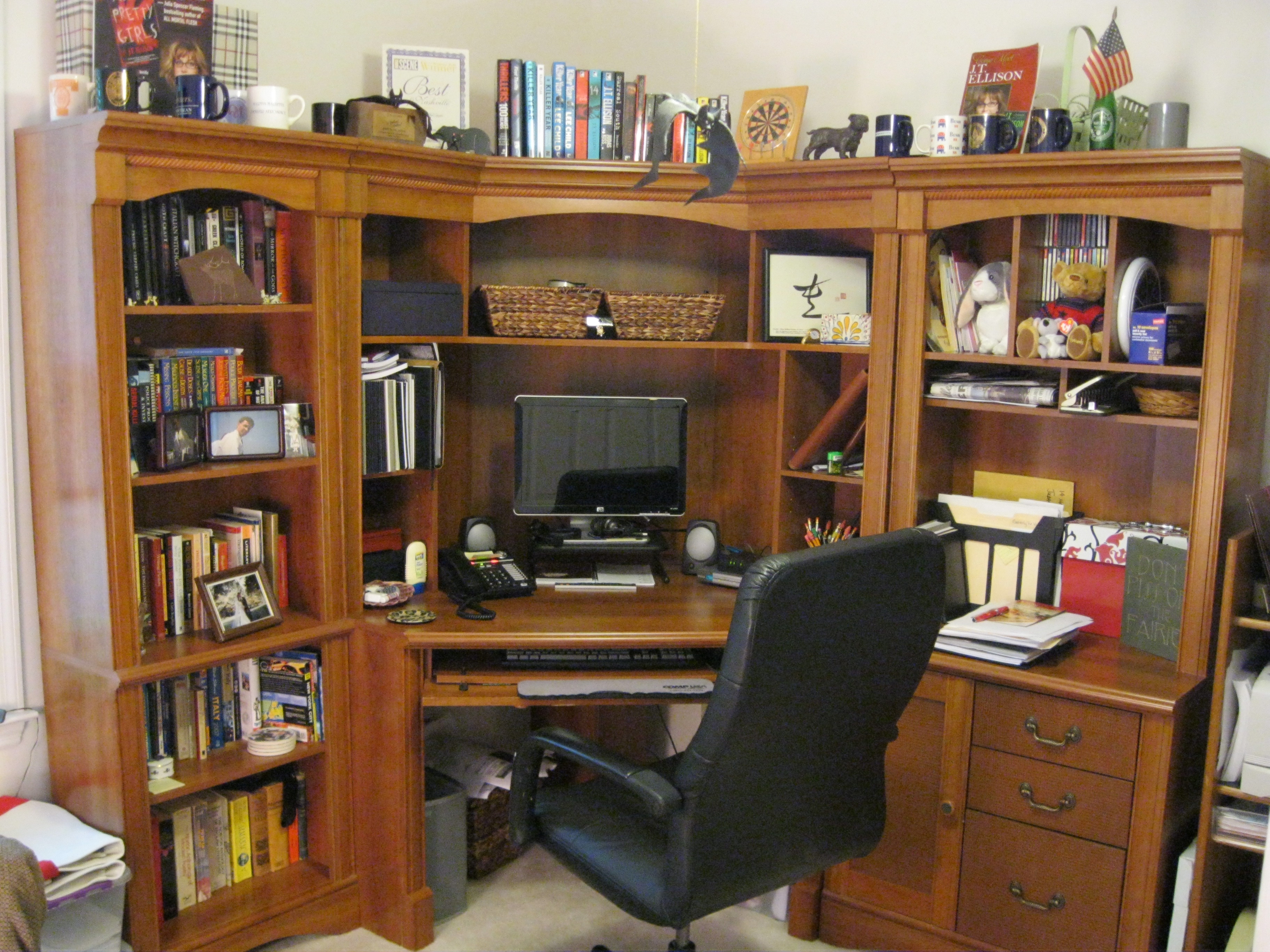 Now we’ve gone and messed things up, because a few weeks ago we bought a new couch. I adore said couch. It’s big enough that both Randy and I can lay on it watch movies or read – it’s a rumpus couch, without a doubt. But we had to move everything around, and sell the end tables, and suddenly, my office away from office was gone. My chair which used to back to the bookshelves now backs to the front door – disconcerting, to say the least. I’ve tried writing on rumpus couch, and that worked, sort of, because of the lovely side table beside it, but I ended up sort of hunched over, and one day last week, I found myself back in my chair. Ahhh… 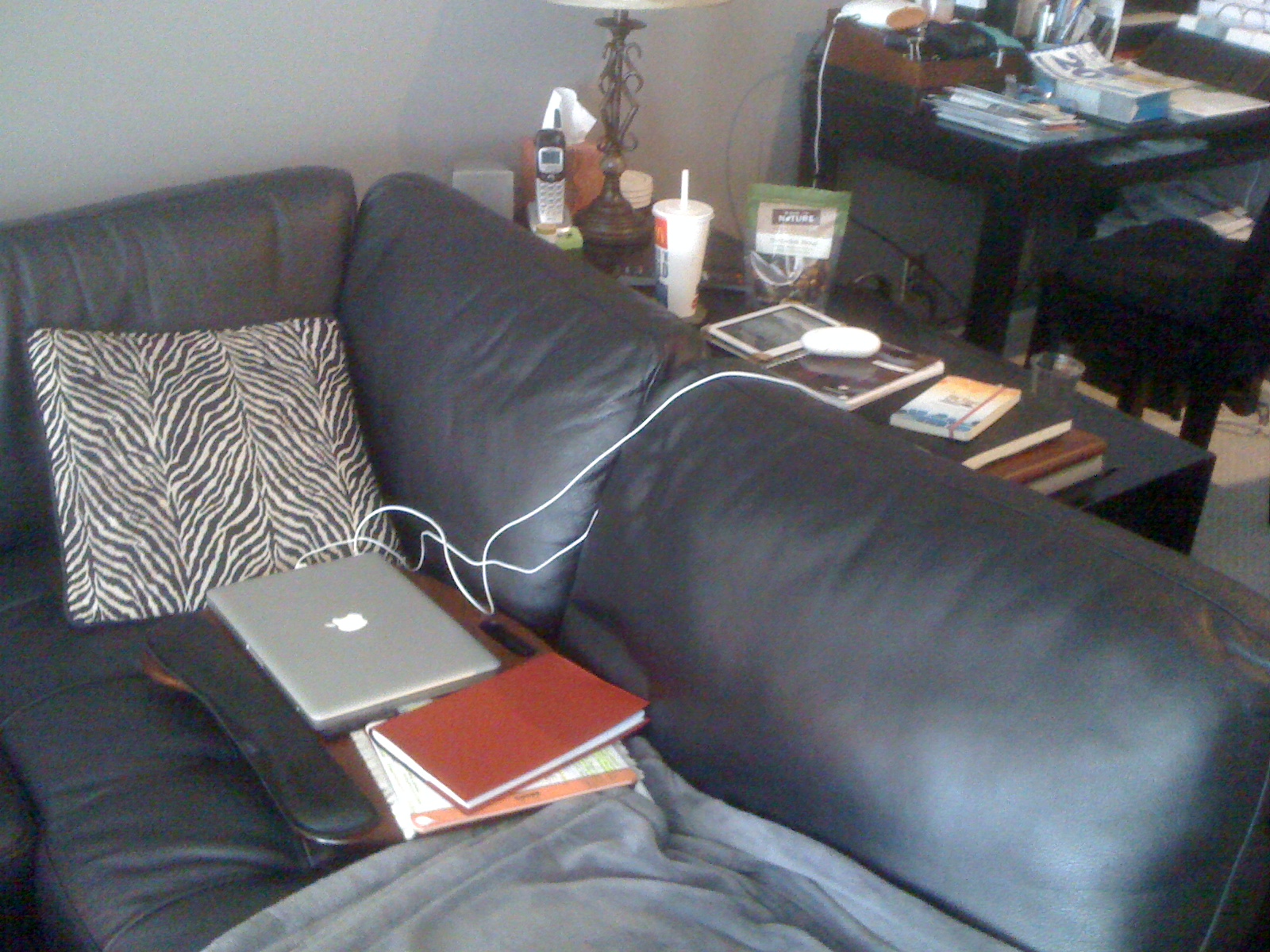 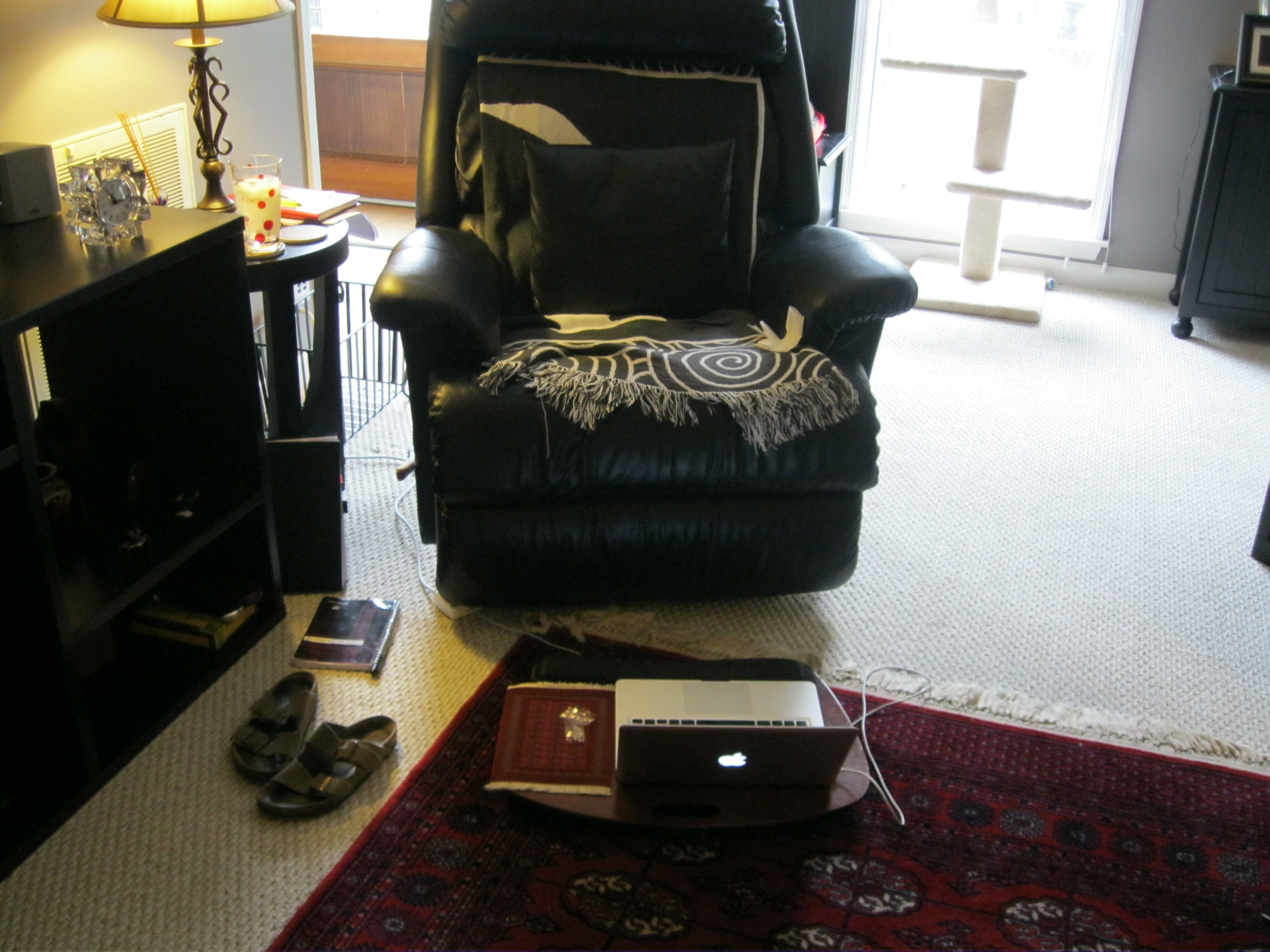 So I’m in transition. I’m making a concerted effort to actually work in my office – I’ve moved almost all my material up there. My Quo Vadis Equology planner, my 5 year diary (not doing so well with that – shame on me) the old Moleskine with all my notes from last year, my bible – the Levenger Circa notebook that houses my series’ cast lists, current research, notes and other necessities, all stay upstairs now, watched over by one of my blessings, the stone carving that says “DON’T PISS OFF THE FAIRIES” My idea box in there (that red box) and the files that I get into daily. 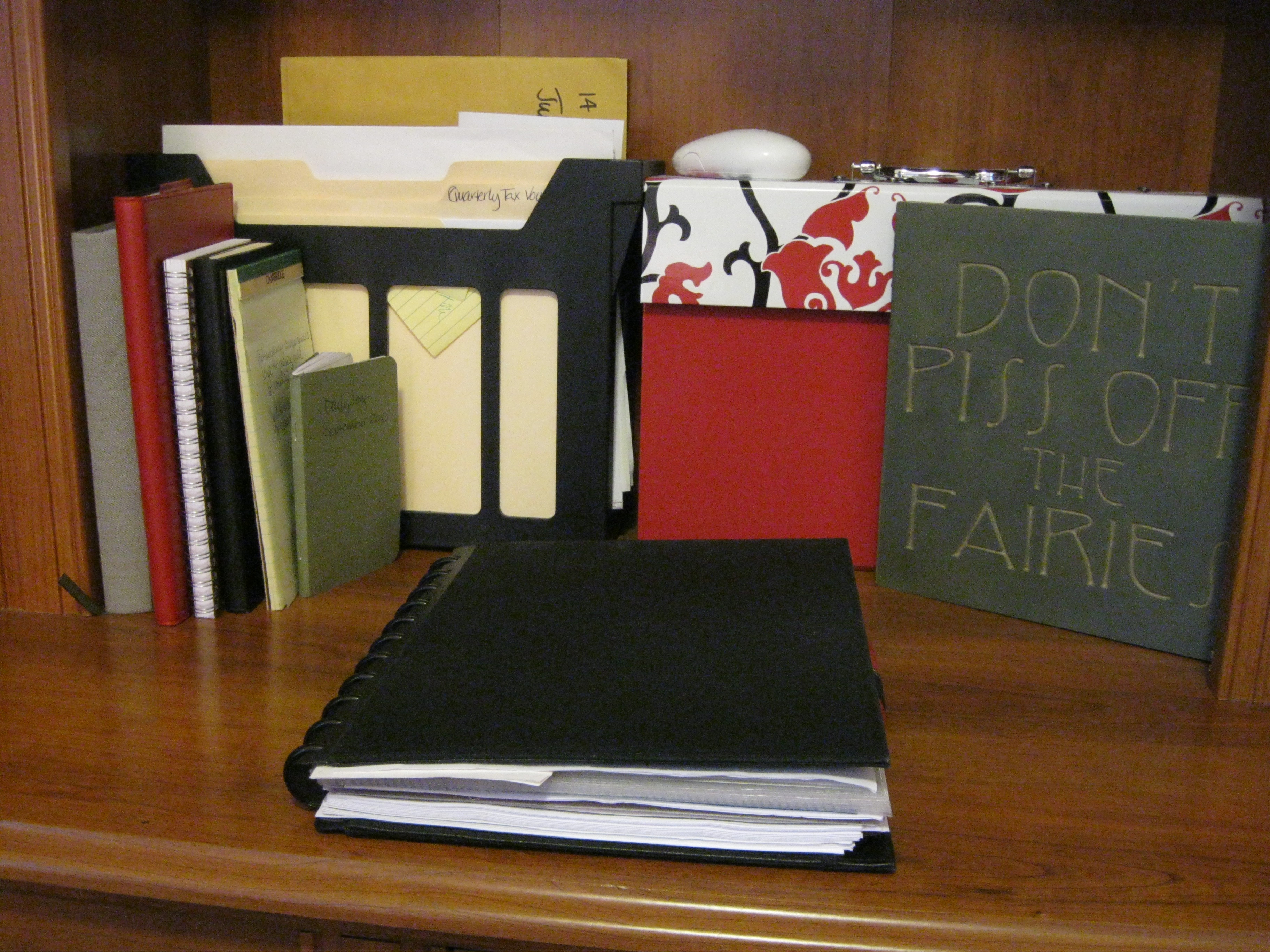 And my Owl, who watches over me and gives me wisdom… 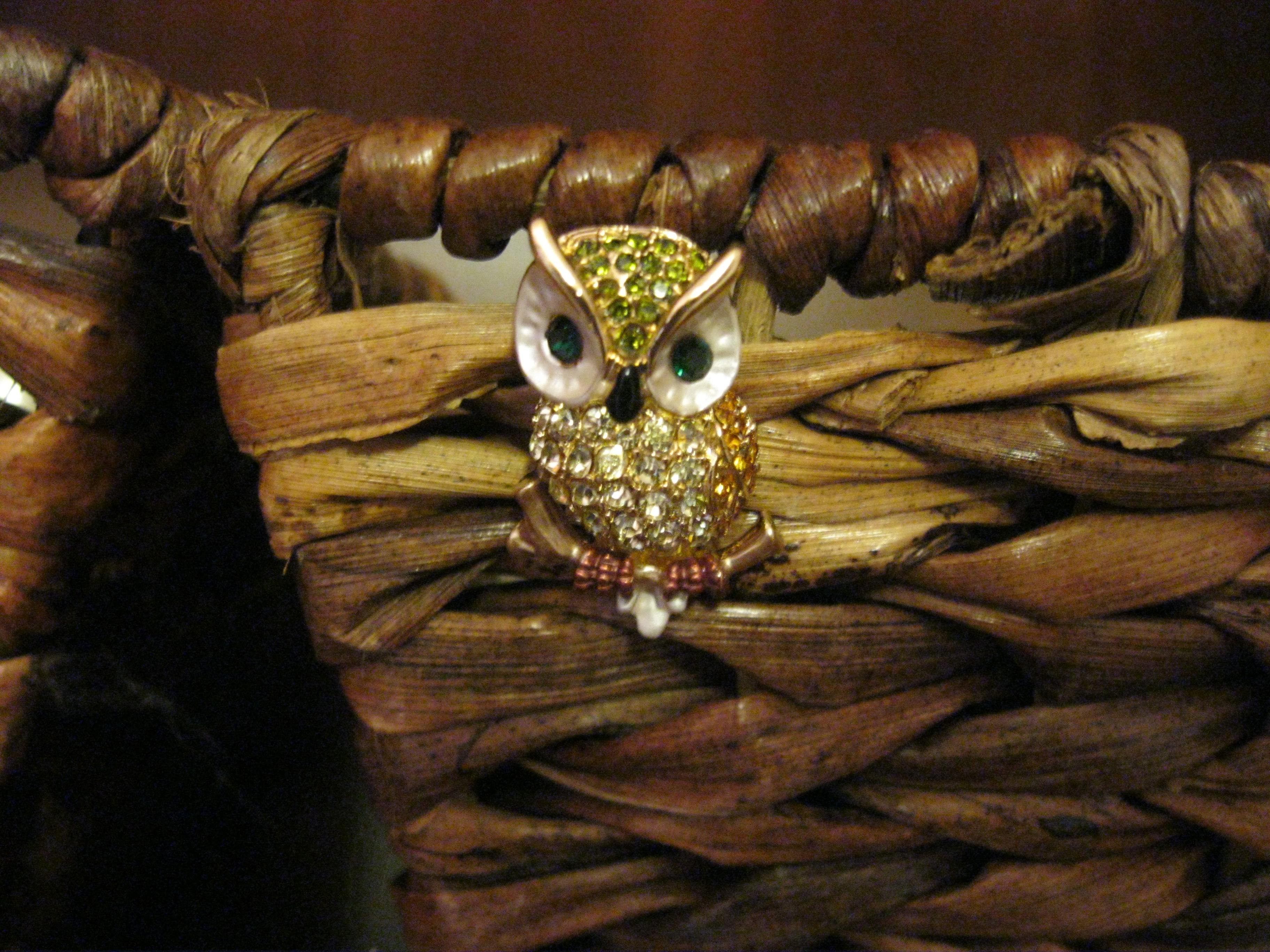 And my whiteboard, with book stages and due dates, plus other projects. (I’m kind of ready for October, because September’s cat looks a bit psychotic to me.) 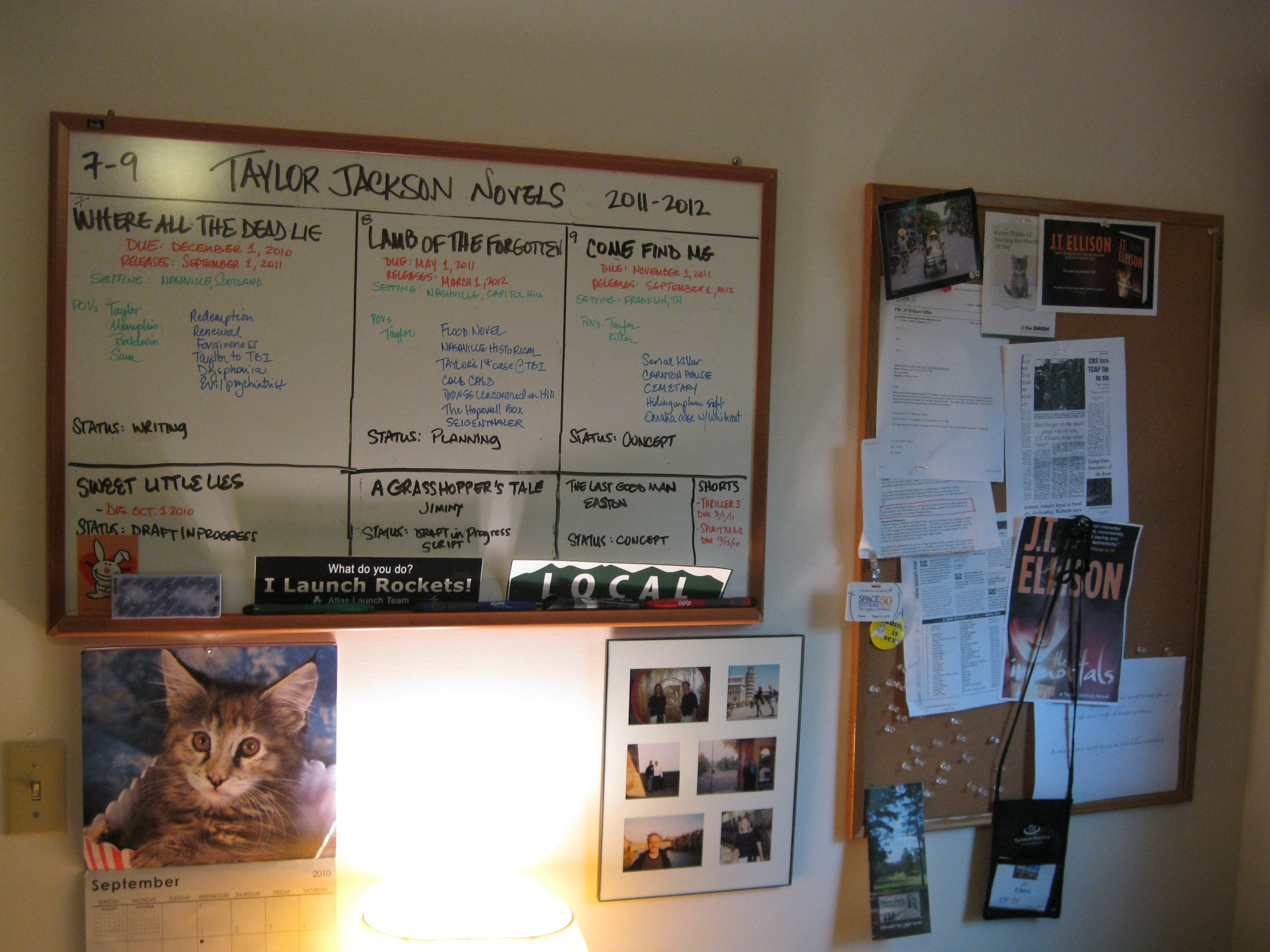 My laptop goes on the nifty lapdesk I picked up at Staples last year and immediately got addicted to – it has the laptop, a cushion for my wrist, my Rhodia notepad/mousepad for to dos, and my Clairefontaine notebook for the book I’m working on. (If you can’t tell, I’m addicted to Exaclair products – truly the highest quality materials for writers in the world.) I’ve been trailing this through the house, searching for the right spot to nestle in and work. We’re moving the chair in my office into Randy’s and moving another one into its place, so we’ll see if that’s better. 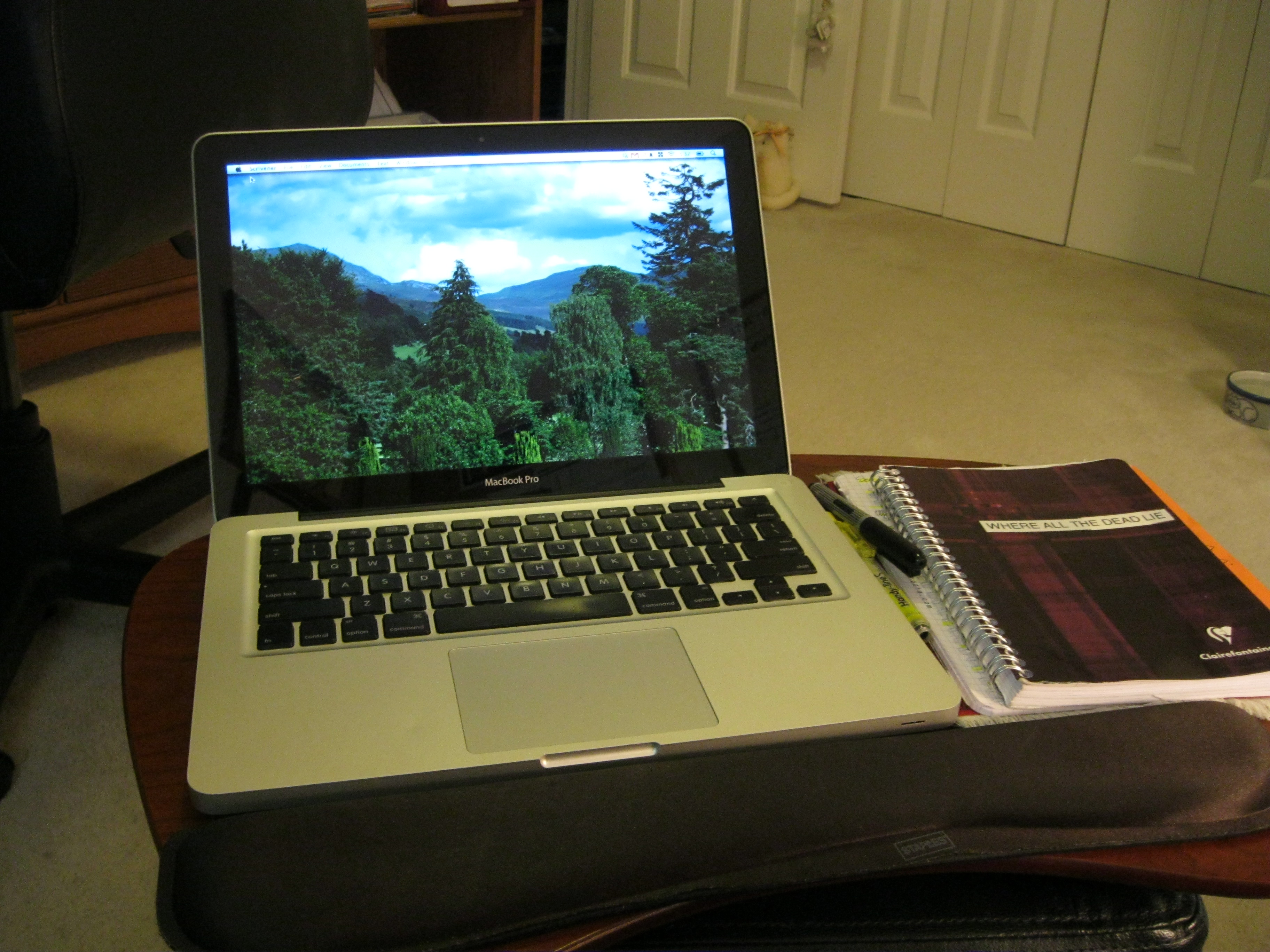 Why don’t I work at my desk? Well, I think the true answer is I don’t feel very productive there, and I think it’s because my back is to the door. The room we made my office is strangely shaped, with an offset, diagonal door. The door opens to the stairs, and down right out the front door. Anyone vaguely familiar with Feng Shui will recognize that all my creativity leaks straight out of the house through a clear, delineated path. I don’t like the keyboard either; I’ve gotten so used to the Apple keyboard on my laptop with the individual keys (I know, there’s a word for that) and I hate the clacking the joined keys make. I’ve talked about my boxes, which you can see in the picture below – most are stored away now, but the two books I’m working on now are still out. 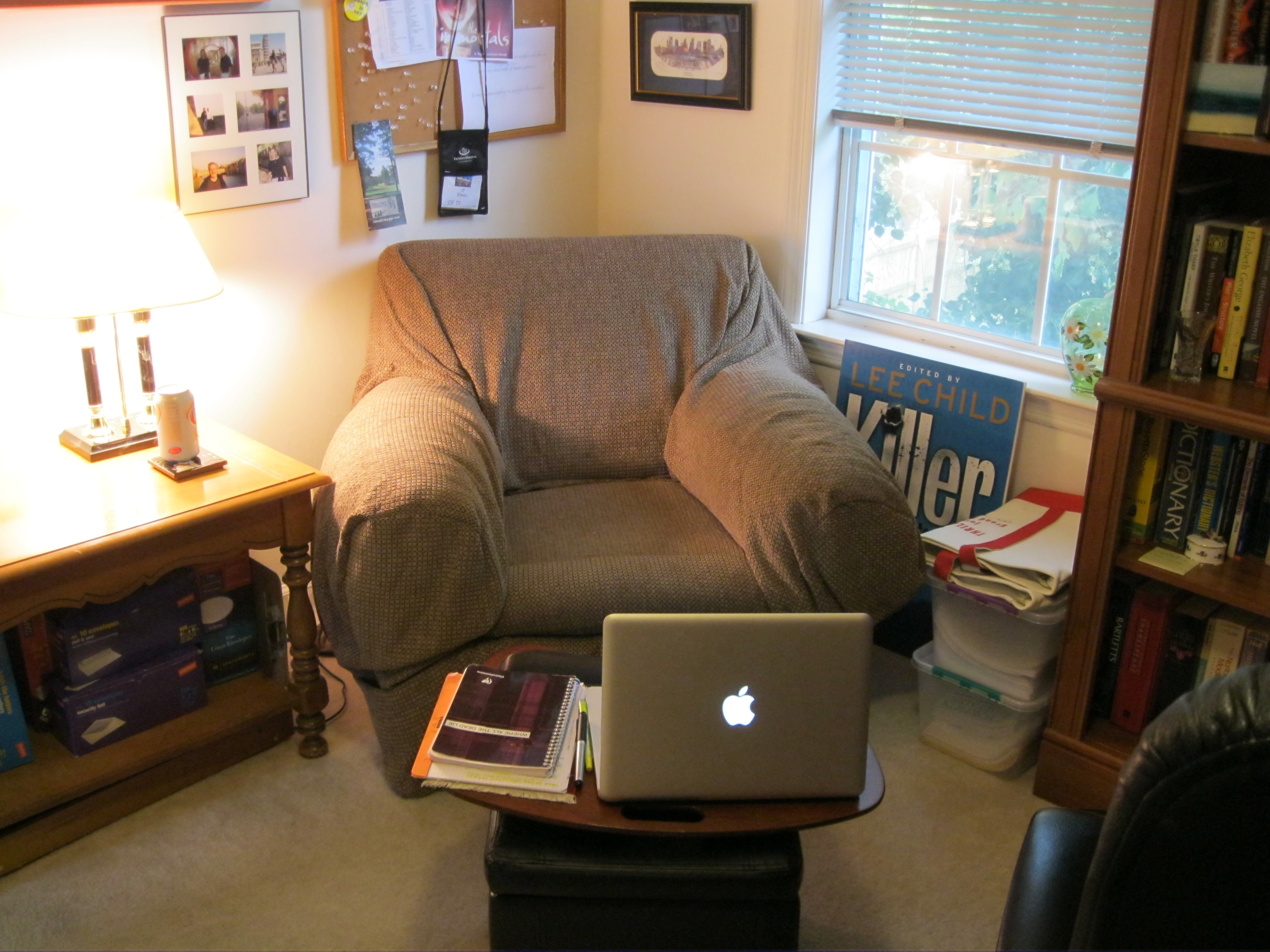 And here’s the view. Right into my next door neighbor’s pool. Which, let me tell you, is a real treat. 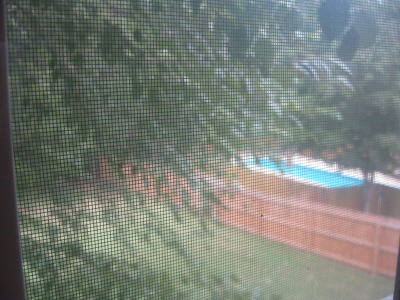 We took steps to make that problem go away last night – we planted a row of Thuja Green Giants along the fence row. They should grow to about 40′ – 60′ and kill that awful view. And I also got to dedicate the very first tree we planted to the memory of our friend David Thompson, which makes me happy, knowing that eventually, when I look out my office window, I’ll see David’s tree instead of the pool. 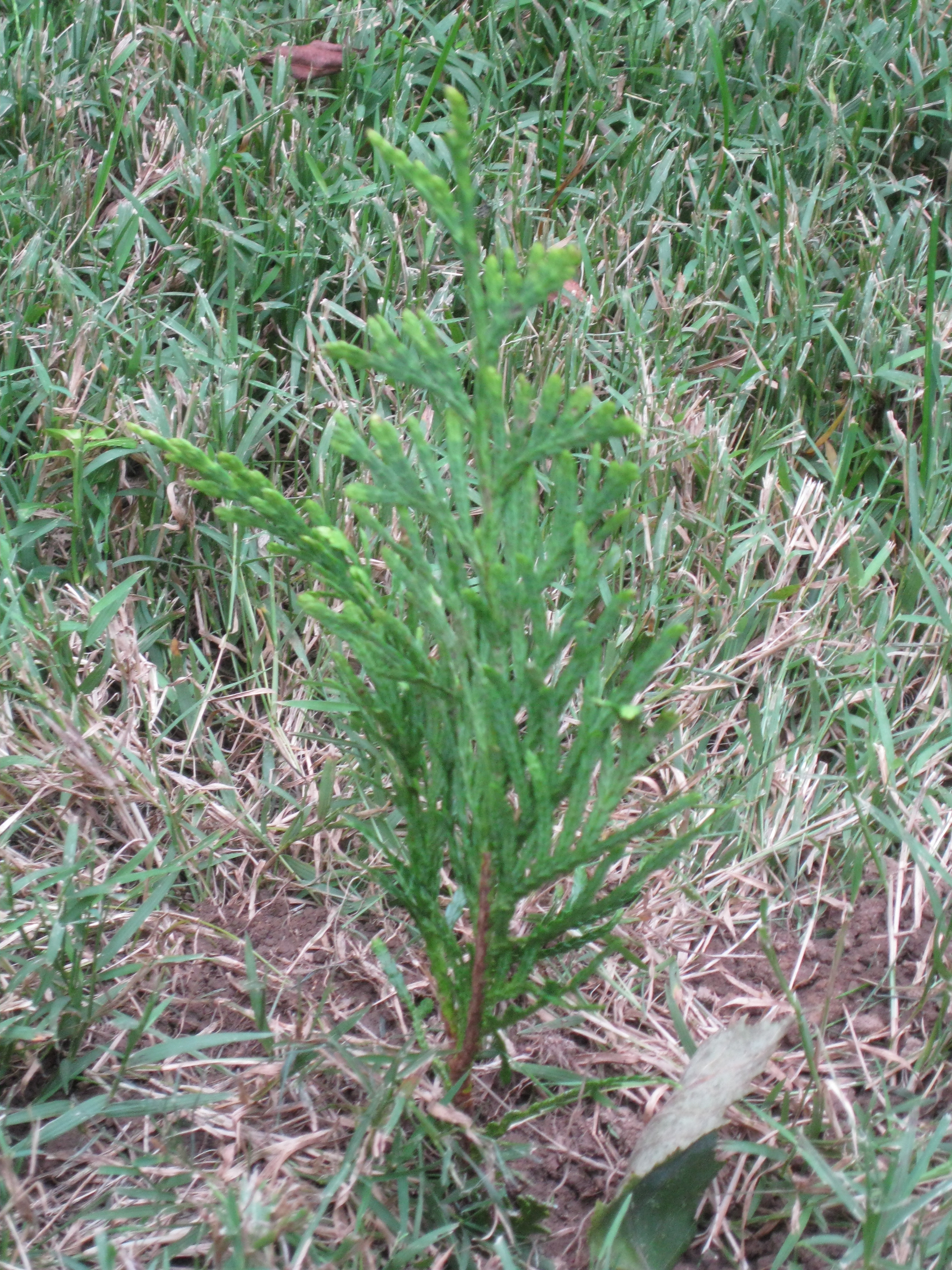 We’re going to redo everything here before long – put wood down, paint, and I’ll make a decision about the desk. As gorgeous as that furniture is, it takes up a LOT of room space. Space that if I turned the room, faced the opposite wall, had the door to my left instead of at my back, might make me feel more settled. But there is something about working at a desk that feels like, well, work, to me. I don’t know if redecorating will change that.

Which brings us to process. That’s something else that seems to be in flux right now. I’ve been very unsettled for the past year from both personal issues and so much travel that I’ve lost my good habits. Which is B.A.D. For someone like me, to whom schedule and order and planning are paramount, losing my habits is a big freaking deal. I also switched computers, from Windows to Mac, switched writing programs, from Word to Scrivener, back to Word, to Pages, back to Word, and back to Scrivener again. These changes were monumental, and have wrecked my normalcy. The good news is that instead of doing a major tour for THE IMMORTALS, I’m relying on the Internet, so I get to stay home for a few months. This make me very, very happy. I plan to create new habits.

All that said – I still shoot for 1,000 words a day at the beginning of a book, and struggle through the first half for months until one day, almost by magic, the story comes together, and then the last half of the book gets written in a few weeks. I think my one day record is about 8,000 words, and that’s only happened once. But I was so close…strangely enough, that book is called SO CLOSE THE HAND OF DEATH, so I guess if you look at title as an allegory for deadline, it’s right on.

And here’s a random shot – my filing cabinet, so to speak. This is my daily workspace – my Dropbox. And yes, everything is filed (and subfiled, and so on) – I’m not good when it comes to chaos. 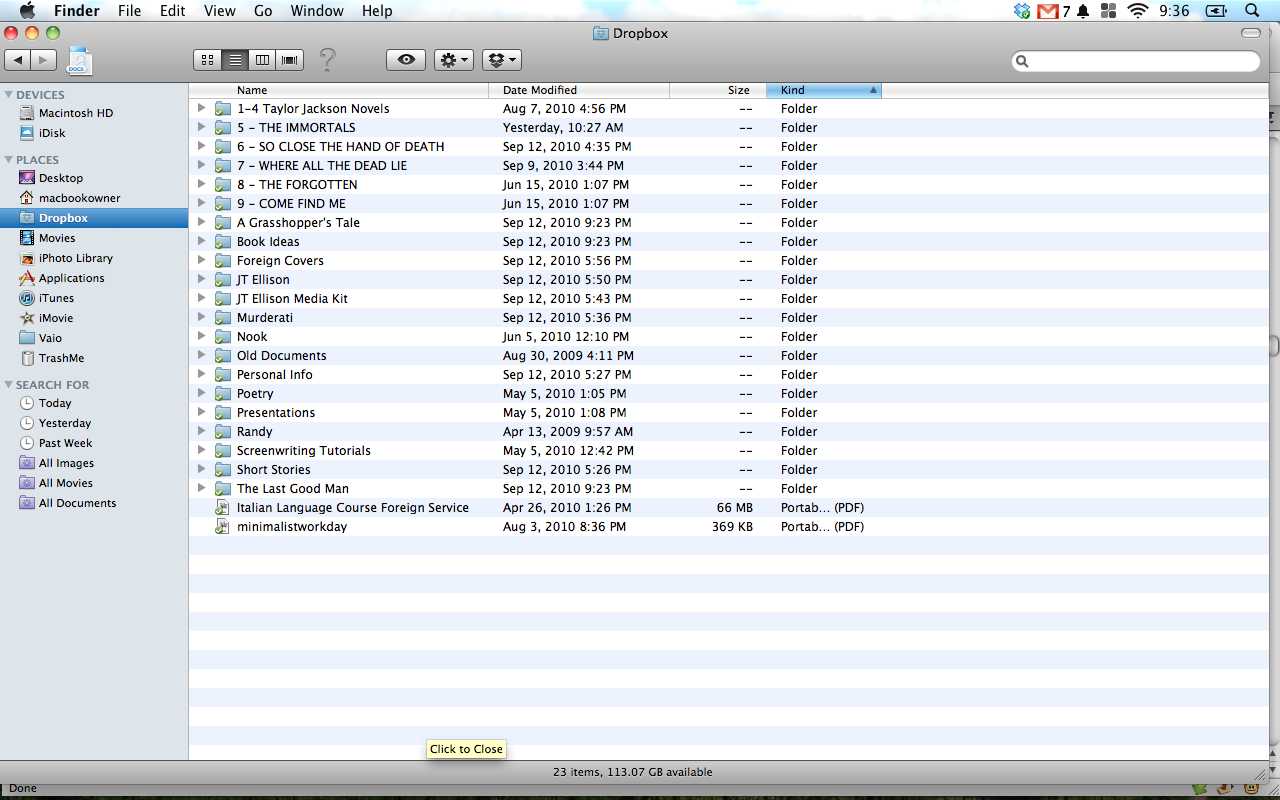 Thanks for letting me share my space with you! This has been a fun and illuminating process, and has proven one thing to me – I have severe office envy. And if you want to compare and contrast, here’s a piece I did on the subject two years ago. It’s goes into greater detail on what’s actually ON my desk…

Wine of the Week: Mirabile Nero D’Avola 2007 – Spectacular! Rich, fruity and ridiculously inexpensive. Would I steer you wrong?