I’m what’s prosaically referred to as a lapsed Catholic (think laissez-faire agnostic with sloppy Buddhist hankerings). So I’m not sure how the Mass begins anymore, but last time I attended Sunday services, the first exchange between the priest and the congregation quoted the 43rd Psalm:

I will go to the altar of God

To God, the joy of my youth

Or, for those who gaze back longingly at the Latin Liturgy:

I puzzled over this line when I first heard it, wondering why God evoked—or might even be equated with—the happiness of childhood. And I assumed it meant that beholding the sacred is much the same as the sense of astonishment that characterizes our earliest perceptions, that sense of boundless wonder, both inviting and frightening in its mystery.

But if I’m perfectly honest, the joy of my youth was largely defined by cartoons.

Of particular influence was the inimitable Michigan J. Frog: 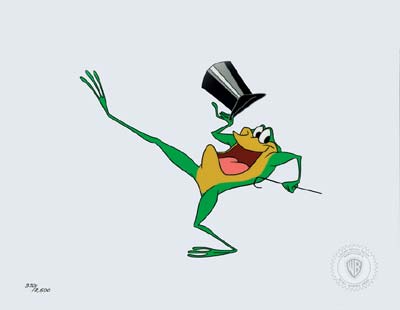 Among all the cartoons I watched as a kid, this one stuck with me more than most, because of its cosmic punch line: Every silver lining has a cloud. Somehow, even at the wee age of whatever, I was already an ironist.

My oldest brother, who ultimately became a research psychologist—excuse me: Human Factors Engineer (ahem)—for the Defense Department, said it was “frightening” to observe how much of my personality was formed by Rocky & Bullwinkle:

I’m not sure how “frightening” I was—or am—but I’m a little stunned at how unfunny that cartoon clip is. (I included this particular one because it has two characters named for my original and current hometowns, Columbus and Vallejo—again, that little noodge of irony).

As I grew up I put aside childish things—yeah, right—until college, when I discovered you can indeed learn a lot from Lydia:

Groucho, Chico and Harpo reacquainted me with the daring face-slap of the absurd, the mad grand fun of chaos—the sanity of craziness—and did so in a way that Duchamps and Breton and Artaud couldn’t touch. I realized that in the eternal bout between scholar and clown—I mean, come on, is it even fair?

Later, I’d become entranced with The Simpsons, of course, the best satire ever to appear on TV:

But I don’t think I ever quite understood the full, life-affirming, soul-saving necessity of cartoons until I met my late wife Terri.

Terri left home at the age of fifteen for reasons too personal to disclose here, but as she was big sis, and big sis was basically mom, her younger brother and sister trailed along, and she supported them all by working as a piece-rate seamstress, the same trade as her beloved Italian grandmother.

But Terri’s brother John was troubled, and when he unwisely dropped a tab of acid at age sixteen it caused a psychotic break. His incipient schizophrenia came on full-blown, and as the only responsible adult in the family anyone could locate, Terri had to go to Herrick to approve treatment. The doctors wanted to give John electroshock, and trusting them, she gave her consent—resulting in her little brother’s now being not just schizophrenic but brain-damaged.

This threw Terri into an emotional tailspin she would spend the next ten years trying to pull out of. And John’s schizophrenia didn’t drop out of the sky. The term “schizophrenogenic mother” has fallen on hard times, diagnostically speaking—no point blaming the primary caregiver for the patient’s illness—or, as one researcher put it:

From the late 1940s to the early 1970s, the concept of the “schizophrenogenic mother” was popular in the psychiatric literature. Research later confirmed that the mother who could cause schizophrenia in her offspring did not exist. Such a blame-levelling concept, which had no basis in scientific fact, may have caused a great deal of harm.

All of this is true, I suppose. But Terri said when she read the diagnostic description in a textbook she suffered an epiphany: That’s Mom. (I had the same experience when I saw the DSM précis for Borderline Personality Disorder and thought it read like my mother’s bio, but I digress.)

I don’t mean to hammer Terri’s mom. She had her own broken soul and deserves as much compassion as anyone. But what Terri found familiar in the diagnostic description was the pendulum swing between distant and judgmental on the one hand, and overly involved, even intrusive and oblivious to boundaries on the other. Nothing was ever quite what it seemed, words often meant nothing, and emotional ambiguity was coin of the realm. “I love you” could be rendered with such indifference or even jealousy that it was easier just to wait, watch and live in a shadow state of denial—until that was no longer possible, as became the case when Terri, at age eighteen, had to deal with the guilt being the one who’d approved John’s destructive “treatment.”

You never have to guess what a cartoon is feeling. No ambiguity here. When Bugs is happy, he’s reeeeeaaaalllly happy. When Sylvester the Cat is sad, the slobbering tears can’t come fast enough. And when Yosemite Sam (or Riff-Raff Sam, as in the above clip) is mad, well, you get it.

Through this ingenious if unorthodox psychoanalytic technique, Terri got back in touch with her emotions. And it gave her a marvelously goofy quality. One day, puzzling over the curious fit of a real-life PI with a closet cartoon character, she confronted me with: “What you need is a moxie moll. What are you doing with a goonybird like me?”

And I thought: God save me from moxie molls.

To the horror of her more uptight lawyer friends, we spent one of her birthdays roasting weinies and eating frosted animal cookies. “David didn’t take you out to someplace nice?” one woman asked. Terri almost bounced: “Nope. It was so cool.”

Don’t get me wrong, Terri was as down-to-earth a person as I’ve ever met, congenitally practical in the way only Italian women can be. And she was smart—she didn’t just sofa-surf cartoons, she read Nietzsche and Toni Morrison and Edna St. Vincent Millay. (I led her astray, turning her on to Robert B. Parker and John Harvey.) But cartoons saved her life.

Not surprisingly, her favorite movie was Roger Rabbit:

Terri was an estate planning and probate lawyer, married to a man who, like Eddie, has a short fuse, so you can imagine how much she enjoyed that ending. And I sometimes wonder if that scene weren’t a reasonable facsimile of the world Terri inhabited most days, at least until ovarian cancer made foolery a bit less fun. Still, even as death crept closer, she retained a pretty good sense of humor, despite the fear, the disintegration of her body and her hope, the dementia. Cartoons couldn’t save her then.

She loved life like no one I’ve ever met, which made seeing her lose her life so young feel so cruel. She was the bravest, kindest, silliest, smartest, most fundamentally honest person I’ve ever known. She remains my hero. I hope, in some small way, I live up to her example.

But there’s a coda, and it involves a caramel-colored pound poodle named Bugsy. (Please excuse the small image; Squarespace and I are having our issues over photos.)

We adopted him and soon discovered he was, to quote Groucho, “the most glorious creature under the sun.” He looked like a Paddington bear. I have friends who still talk about him glowingly–he was that kind of dog. He bounced. He buried his ball in a blanket so he could pretend it was hidden, then dig it up. His stubby tail wagged like a hummingbird. He was the closest thing to a living cartoon I’ve ever known.

Bugsy survived Terri by five years, and was as clownishly sweet as she was right up until the end. The circumstances of his passing eerily mimicked hers, so much so I wrote about it in the following poem, and I add it here not to crank the sad into maudlin, but to add a final and appropriate touch of wonder. These two incomparable beings returned to me the joy of my youth. I’m grateful.

Dogs get cancer, who knew?

like you were, all that muck rattling in his lungs.

And it’s that time of year, so close

to the five-year mark of your death.

To be fair it’s not so terrible. Not yet.

Credit the steroids, I suppose.

Got the appetite of a hobo,

still fetches his ball some, nuzzles my hand,

but his hair’s going, each breath brings a cough.

As for me, in five years I’ve learned to let go.

I get it, the finger-snap of life, drinking

from the dharma’s clear, cold well

or whatever Buddhist bullshit applies.

I recall your take on such things.

Phooey, to be brief.

I wonder if that’s changed,

where you are. If anywhere.

I remember the last place you were too well—

tube jammed up your nose, down your throat

into your gut to pump out the shit-brown sludge

that would rot your insides if not drained away.

you wandered the cancer ward day and night,

bed to chair to hallway to bathroom to bed again,

tidal surge of morphine in your veins,

the doctors baffled by your pain.

Vomiting, pissing yourself. My bride.

For all that, though, I pity

those unscathed by great love.

What I know of things divine, I learned

from you. You and this rascal dog:

rescued from the pound, spared

the killing needle and nursed back

from kennel cough and garbage gut

and, once, less ominously, a bee sting to his nose—

The whole doggy diagnostic, now this.

Through it all, he’s been gentle, honey-hearted.

but uncanny as well. After you died,

he began each day by crawling onto my chest,

curling his paws onto my shoulders, licking my nose.

It’s what the holy rollers crow about,

ripping open their hearts to the Lord.

That aching, mad want: He listens.

He watches. He knows. Loves.

If true, pity it didn’t count for more

when you were dying, or now,

as this minor, magical creature

noses toward his own death.

I promise I’ll hold him at the end,

stroke his head and flank and

tell him he was the best damn dog,

remind him that you thought so, too.

Then, if you can—though the smart money

says you can’t—guide him to wherever you are,

call his name (he’s hard of hearing these days—

will death cure that?) and open your arms

as he steadies his legs and shakes and

cocks his head, then figures it out,

So, Murderateros: What was the joy of your youth? Have you revisited it — or it you — in adulthood? Does it carry for you an element of the divine? Has it, in even some small way, saved you?

No need to stick to the Q&A. Feel free to make any comments you please. I’ll be happy to respond however, to whatever.

BTW: For a fictional version of a gifted young woman saved by cartoons, check out Nadya Lazarenko in my second novel Done for a Dime, most of which was written after Terri’s passing. My attempt at homage.

Jukebox Hero of the Week:  Terri didn’t live to see the Scissors Sisters, but I think she would have approved of dancing eggs, singing watermelons, and a giant pink goonybird:

28 thoughts on “In Praise of Foolery (Or: Cartoons Can Save Your Life)”