As a photographer, shadows interest me, but as a writer, they fascinate me. Darkness has a tendency to be absolute, but shadows are open to such interpretation according to mood. Take this picture, for instance, which I took a couple of years ago. It’s of a giant (well 66ft high with a 178ft wingspan) contemporary sculpture by Anthony Gormley called The Angel of the North, just on the outskirts of Tyneside in the north-east of England. Ever since the first time I saw it, this has seemed sinister to me, and I deliberately took this photograph to highlight that feeling. But to the people clustered happily round the statue’s base, it clearly had no such overtones. 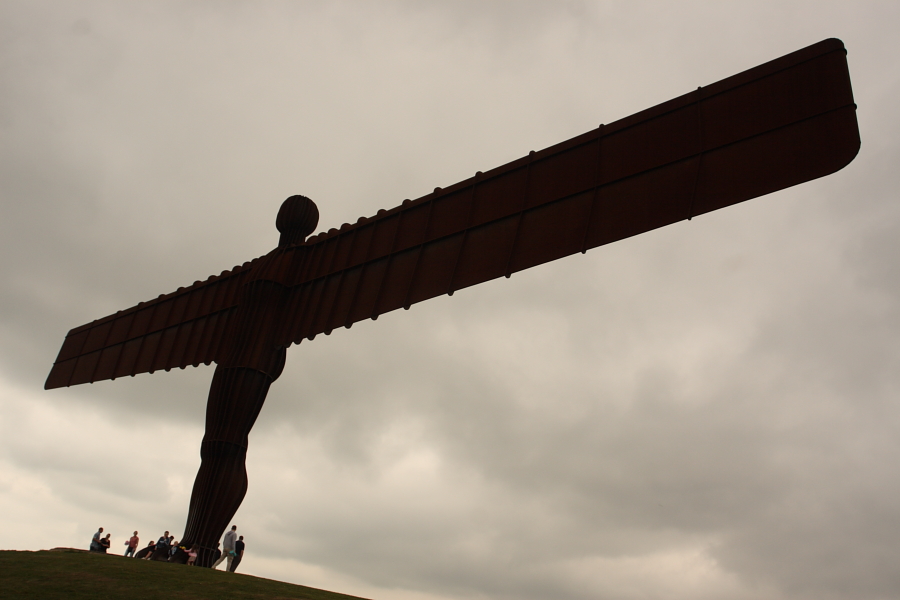 Everything we do and say is open to interpretation according to the mood of those witnessing our words and actions. Confidence to one person is arrogance to another. One person’s joke is another’s insult. I’ve been guilty for making an offhand remark that was probably somewhat thoughtless on my part rather than purposely cruel, just as I know I’ve made the occasional pointed comment that went straight over the intended person’s head. Many years ago I once wrote an entire comic column gently mocking someone, and they apparently read and enjoyed it without the slightest inkling that they were the target of my dubious humour. (Perhaps this simply demonstrates I’m not very good at that kind of thing…)

Written words are open to far more interpretation than spoken ones. Somebody once told me that there are six ways to read a letter, depending on tone and inflection. I don’t know if that’s true, but I’ve certainly gone into pits of despair reading more (or less) into a brief email than was ever intended by the sender. The immediacy of email and text is causing a real problem, I think. How many people who now email and/or text on a daily basis were ever prolific letter writers before such media came along?

Emails are dashed off, sometimes in anger and haste, only to be regretted later. I have, on numerous occasions, written a vitriolic email and put it in Drafts for a suitable cooling-off period. Quite often, the email never gets sent, but the act of writing it at all has enough of a therapeutic effect.

Because, sadly, the Internet has made it a lot easier to be nasty to people without consequence.

In the past, I’ve been on the receiving end of both death-threat letters – carefully cut out of newspaper like a ransom note – and abusive phone calls left on my answering machine. Both instances involving calling in the police, although there was no satisfactory follow-up prosecution. Now, if I get an email I don’t like, I have a tendency to simply delete it, so the consequences for those who send such poisonous missives are so much less.

Authors, these days, have moved far more into the spotlight. A few short years ago, the only way to contact an author was a letter via their publisher, which was often opened in the office beforehand, just to make sure it contained nothing too outlandish. Or you could approach them at an event, which takes a lot more bottle. Authors could hide in the shadows if they so desired, because there wasn’t the opportunity for self-promotion. Authors were expected to write a good story and that was the beginning and end of it. The only thing the public knew about them was the brief paragraph in the front of the book itself.

Now, of course, an author has to have a website, and most likely a Facebook page and Twitter account, and take part in blogs and online discussions, most of which we are happy to do. Writing is a solitary business and sometimes it’s nice to emerge, blinking, into the light.

We are encouraged to reveal more and more of ourselves, our personal lives and our thought processes, because our readers like to know what makes us tick. Not only that, but we are also encouraged to be performers. We are moving further and further out of those comfortable shadows, while some of our audience is retreating further and further into them. People can open up a dialogue with an author and receive replies, without ever revealing their real name or location.

Pay-As-You-Go mobile phones, and instant email addresses make it hard to trace the senders in any case. I’ve had weird emails from people posing as fans (mainly blokes, I have to say), who lull me into a false sense of security with relatively normal questions to start with, and then start asking coyly if I’m married and what I’m wearing. The awareness of being somehow a ‘public figure’ prevents you from telling them where to get off in no uncertain terms, because you know that would cause more problems than it would solve.

I wonder if the written word is to blame for this. People ask inappropriate or invasive questions without being able to directly gauge the reaction of the person they’re asking. But, having said that, writer friends have reported amazing behaviour from people at conventions. Following an author into the restroom and pushing a book to be signed under the wall of the stall while they’re otherwise engaged is not unheard of.

So, what are your views on this, ‘Rati? Should people be a little more open about themselves before they ask for more information about their favourite author? Do you like the anonymity of the Internet, or does it freak you out just a little? Have you any scary stories to relate?

This week’s Word of the Week is mishguggle, which is a lovely Scottish word meaning to bungle.

33 thoughts on “In and Out of Shadow”