When I saw this photo of an Amstrad PCW in Zoë’s recent post about her return to her writing roots . . .

. . . a huge smile spread across my face, because it immediately made me nostalgic for the days in which I was writing on my own dinosaur of a word processing machine.  That dinosaur was a Zenith Z-161 portable computer, and it looked like this: 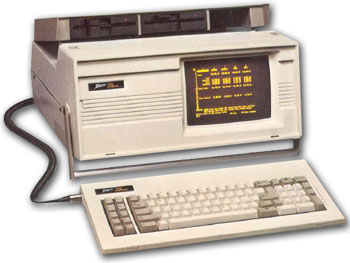 I use the word “portable” because that’s how it was described in all the brochures, but this thing was about as portable as an anvil in a suitcase.  Lugging it up a flight of stairs was more exerting than any pulmonary stress test your doctor could possibly give you.

But I loved it.

Not for its looks (though I did find it rather handsome), but for its functionality, which was damn near as limited as that of a toaster.  With its 9-inch, monochrome screen and pathetic 256K of memory, there was one thing, and one thing only, I could do on my Z-161: write.  Type on the keyboard, fill the screen with words, and save those words on a big, black floppy disk.  Wanna play games?  Forget about it.  Surf the web?  There was no web back then.  Play music?  Get serious.

It was the perfect machine for an aspiring author, because it made what aspiring authors do best — avoid the actual work of becoming a published writer — as boring an undertaking as possible.  If you turned the Z-161 on and didn’t write, all it would do in return was stare back at you, little yellow cursor soundlessly blinking against a solid black CRT screen.

I wrote most of my first two novels on my Z-161 at home, in the evenings and on the weekends.  I was living with the (now ex-) wife, our two daughters and my step-son in a small two bedroom apartment in Encino at the time, and one corner of the kids’ bedroom was the best I could do for a private workspace. 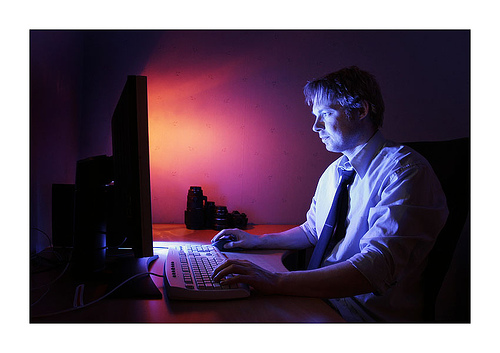 After a while, as you might imagine, family distractions grew to the extent that I begged my manager — I was working full-time as a computer technician in those days — to let me write in our El Segundo office a few nights every week.  He agreed, and so I began to write, at least part of the time, alone in an empty office building with just the book in my head and an IBM desktop PC that was every bit as singular of purpose as my Z-161.

I can’t say the writing always came easy on those two machines — but I can say it always got done.

I won’t go into all the sources of distraction that now come with personal computers — games, email, online social networks, movies and music, instant messaging, etc. — because anyone reading this blog already knows what they are and how difficult they make it for writers today to get anything done.  But they bear mentioning here only to make the point that I don’t think it’s a coincidence my rate of output has never been better than it was when I was writing on machines that offered me no entertaining excuses whatsoever not to write.

My wife Tessa speaks Spanish fluently, and when I say “fluently,” I mean she regularly draws double-takes from native Spanish speakers when she uses the language at length.  They can’t believe their eyes or ears.  But Tessa didn’t learn Spanish from a book, in a classroom, or by listening to a series of lessons on CD.  She initially learned it by using it, almost exclusively, for three weeks in El Salvador and one in Guatemala, in the early ’90s.  In other words, she learned to speak and understand Spanish the way some people teach themselves to swim: by jumping into the deep end of the pool, where you either fight to stay afloat or drown.

This is called the immersion method of learning.

I believe there’s an immersion method of writing, as well, and that’s the method I was inadvertantly using (because I had no other choice, frankly) when I was doing all my writing on a Zenith Z-161 and an IBM desktop.  But it wasn’t just the archaic computers I was using that made my immersion possible; the environments I was writing in were key, as well: a tiny little bedroom with a single window and no TV or radio, and a closed computer company office as silent and vacant as a tomb.  In both cases, the only thing I ever had to keep me company was the book I was writing, and my only alternative to working on that book was twiddling my thumbs and whistling in the dark.

I chose to work on the books.

I can’t write on that old Zenith “portable” anymore.  Though it’s still in my possession, it’s too slow and cumbersome for my purposes.  And I no longer have access to that office down in El Segundo, nor that tiny, one-windowed bedroom out in Encino.  What I can do, however, is simulate the state of immersion those machines and locations forced me to write in, once upon a time, by turning my desk away from the window in the home office I write in today, and pretend the laptop I write on at present has no internet connection and no installed software other than Microsoft Word.  The idea is to get back to that time and place in which only two things existed for me in the whole world: my latest WIP and a device to write it on.  If I can get there, I may not have much fun — but I bet you I’ll have a completed manuscript in a lot less time than it’s been taking me lately to crank one out.

Quickly, Sherman!  To the Wayback Machine!

Questions for the Class: Writers, does the immersion method work for you?  Or do you need sources of distraction swirling all around you to do your best work?