As so often happens, I actually had another topic planned for this post. But yesterday I found something out that absolutely redlined my bullshit meter. Acording to Lee Goldberg’s excellent blog A Writer’s Life, there’s a movie version in the works of John D. MacDonald’s first Travis McGee book, THE DEEP BLUE GOODBYE.

McGee is to be played by…brace yourselves: 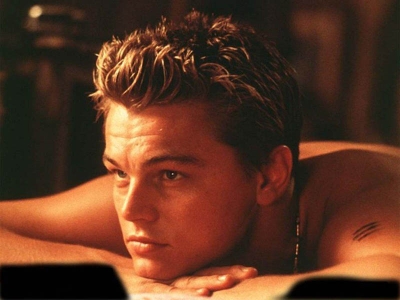 I think I just threw up a little in my mouth.

Okay, after seeing BLOOD DIAMOND and THE DEPAHTED, I’ll grant that DiCaprio can play a tough guy. He’s turned in some great performances.  But damn it, he’s just wrong for McGee. He’s too short. He’s too blond. He’s too goddamn pretty.

I know I shouldn’t get this upset. It’s just a movie. And McGee’s just a fictional character in some old paperbacks.

Except to me, Travis McGee is a lot more than that. As I’ve mentioned here  before, I discovered the Travis McGee books at a formative time in my life. In my mid teens, I was a lonely kid with a tendency to wax philosophical. I could, and occasionally did, get all tragic and self-pitying, what the kids today  call “emo.” But then John D, MacDonald’s series about a loner with a philosophical bent who lived on a boat, righted wrongs, AND got a lot of hot women, hooked me and hooked me hard.  My parents had a couple of the books on their shelves, and after devouring those,  I went out and hunted down every other  one I could find. I’ve probably read all of them at least twice, and some I’ve read so many times the old paperbacks are coming apart.

McGee had a lifestyle most people would envy. In addition to the aforementioned boat and hot women, he had a fantastic , if entirely unconventional car: a Rolls Royce some maniac had painted electric blue and chopped up to make a pickup truck. He called it Miss Agnes after an old teacher who’d had hair the exact same shade of blue. He had an awesome best friend: a genius economist named Meyer who lived on a nearby boat and provided  him with a foil for his musings (and a mouthpiece for  some of John D. MacDonald’s observations as well). Most importantly, though, McGee had life figured out. He had life flat knocked. McGee had decided that life was too short to wait for the good times, so he’d take his retirement in installments and only work when he needed money. To make this happen,   McGee crafted for himself the ingenious profession of “salvage expert,”   a  euphemism for what he really did: Recover things for people who’d had those things stolen from them. Often, the thievery was legal; McGee’s methods of recovery,  not so much. His fee was half of whatever he recovered. On the surface, this sounds pretty mercenary, but McGee had a romantic streak that often caused him to take on apparently lost causes. He once expressed his philosophy of life in a way that almost makes him sound like a hippie:

Up with life. Stamp out all small and large indignities. Leave everyone alone to make it without pressure. Down with hurting. Lower the standard of living. Do without plastics. Smash the servo-mechanisms. Stop grabbing. Snuff the breeze and hug the kids. Love all love. Hate all hate.

And yet, McGee could go out and kick asses if he needed to. THis was fortunate, becuase he needed to, a lot. Further, he didn’t take himself too seriously. He referred to himself  on more than one occasion as a  “knight with rusty armor, a bent lance and a swaybacked steed.” This cynical/romantic dichotomy is pretty much a staple of private eye fiction; McGee, however, took it and made it seem even cooler than usual.

And that, more than anything else, is why Travis McGee is so special to me. There are a lot of real-life people who influenced my idea of what it was to be cool. But I can’t deny the influence of some cultural icons as well, and one of the first was Travis McGee.

Granted, he had some flaws. His attitudes towards women could be a bit paternalistic, although it’s unfair to call it Hugh Hefner-like,  as George Pelecanos once did (McGee would probably bridle at anyone referring to a woman as a “Playmate”).

All that said, though, McGee was the type of guy who a lonely kid could aspire to be. He was a tough guy with soul. An undeniable bad-ass, but with a soft spot for the wounded and downtrodden and a willingness to fight for them. A guy who lives by his own strict code, but who doesn’t take himself too seriously. A guy who doesn’t give a damn what the world thinks of him or the way he lives. A guy who is, in a word, an icon of cool.

And I’m sorry, Leonard DiCaprio can never be that.

So tell me, ‘Rati: what fictional character most influenced your concept of cool? Has any movie casting of one of your favorite characters pissed you off as bad as this has me?

32 thoughts on “Icons of Cool”