First off, don’t forget to sing the title of my blog today, aka Westside Story.

After a couple of blogs on the writing/professional side of things, today I’m in holiday mode and thought my blog and state of mind should be one! At the moment I’m sitting in my Hawaiian hotel (Waikiki) and although we’ve only been here a few days, we’ve already packed lots in.  The fact that most of it revolves around the pool, food and shopping…

This isn’t our first trip to Hawaii, so maybe that’s why we’re not hitting the tourist sights as much as we ‘should’ be.

My first trip to Hawaii was in 1997, on my way to Canada. That trip was only four days long and marked the start of my one-year working holiday visa. I was only here for a few nights and it was party time! Then again, I was in my twenties.

My next trip to Hawaii was last year, when my mum shouted me for my 40th birthday. And yes, you now know how old I am! We called it the girls’ trip and it was Mum, my daughter and me. We had a great time and a few weeks ago Mum started dropping hints about how nice it would be to go back to Hawaii, but this time with my sister as well. So, here we are. And once again, my daughter’s prized possession, Pooh Bear, is along for the trip as an honorary girl.

It ended up being quite last minute, a June special. So it was all very sudden and very exciting! But it is quite a long flight from Australia (plus we had a couple of hours in Sydney) and I think Grace’s state on arrival says it all. This pic was taken in the hotel foyer, while we were checking in! We hoped maybe her cute collapse would get us a free upgrade to an ocean view but it wasn’t meant to be. 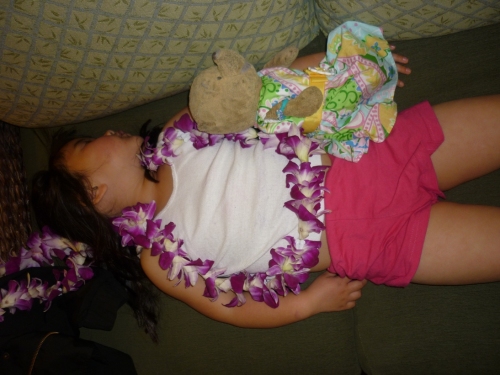 One of the things Aussies do when they hit the US, is shop. I kid you not. America has seriously cheap clothes. So, by day two we’d already been to Ross twice.  As I unpacked my day 2 shopping I did wonder if I needed THAT many ¾ pants (Capri) but you can never have too many when they’re like $9…right?

Of course, there’s only so much shopping a four year old can take, but we’ve also been hitting the pool for a couple of hours in the morning. The pool time is mostly for Grace, although my sister is a sun-lover.

Buffalo wings are also part of my American tradition. Yes, I know they’re terribly unhealthy but they are yummy! And although some places will advertise American-style buffalo wings in Australia, they just ain’t the same. So, on the second night we hit The Cheesecake Factory. Unfortunately, the wing experience wasn’t quite how I remembered it. I’m sure they never used to have any kind of crumbing or coating, but this time they did. Oh well, I’ll just have to try again another night.

For the trip last year, I also threw in a bit of research, in the form of a visit to the firing range. One night, after Grace was tucked up in bed and my mum was settled into the golf, I set out for my big gun experience. Gun laws in Australia, and my state of Victoria, are extremely strict and I thought Hawaii might be my only chance of firing an AK-47 and similar big weapons. It was certainly a once in a lifetime experience…there are really only so many times you need to fire a gun for research purposes.

Tomorrow is the factory outlets (more shopping), then a luau (Monday), Diamond Head (Tuesday) and finally a daytime catamaran sail (Wednesday). Then it will back to the Aussie winter. Brrr….

And maybe there’s a chance for one more go at buffalo wings!

What are your favourite haunts when on holidays?

18 thoughts on “I love to be in America”