I hate having to title fiction. Titles drive me living batshit (sans clutch) and honestly, I’m terrible at them. The only title of my own that I ever really loved was the first title of my first book: BOBBIE FAYE’S VERY (very very very) BAD DAY. When I sold that book, there were three more verys in that parenthetical, and I know for a fact I drove the marketing people nuts with those. They cut those three out, and then changed the title altogether when we went into reprints in mass market, because the length of the title plus two names (Bobbie Faye’s and my own moniker) was just too much for the mass market sized cover. I was tickled as hell at first to get to keep the title, until had to type it for a bunch of different reasons, never remembering to make a macro keystroke setup so that I wouldn’t have to type something so long. You would not believe how I managed to misspell her name. (Well, maybe you would.)

What I thought we’d do was keep the (very very very) for each book. My editor was on board with that… only… I couldn’t think of anything that worked with the story. And then it occurred to us (duh) that if every book has the (very very very) parenthetical, people weren’t going to remember which book they already had vs. which book was new. So we set out to change the parenthetical, and come up with something akin to the rhythm of the first. That effort ended in BOBBIE FAYE’S (kinda, sorta, not exactly) FAMILY JEWELS. Which I sort of hated for a while and then grew to not loathe. (My poor editor came up with a thousand titles–we just couldn’t find one we liked and honestly, this was the one that bothered me the least. But she tried. My God, did she try.)

It still confused people. You wouldn’t believe the email I got asking me when the new book was out, in spite of the fact that they had seen JEWELS on the bookstand… they thought that was the one they had. Not entirely the effect we’d hoped to have.

The only other title I’ve liked is my short story title in the Killer Year Anthology: Stories to Die For. Its title? A Failure to Communicate — but that’s because I fractured time as well as communication, and that fracture was the point… plus, that’s a line said to Paul Newman in Cool Hand Luke…

a line he liked so much, (so the apocryphal story goes), he had it written in to Butch Cassidy and the Sundance Kid. 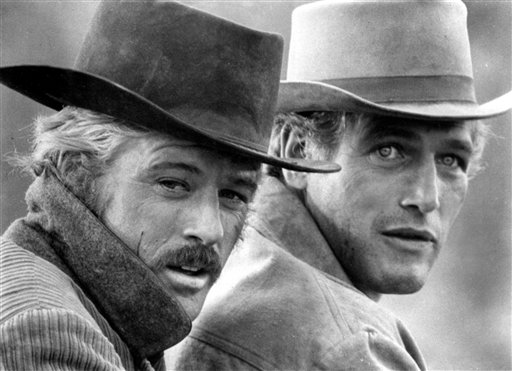 (In my story, Trevor has nicknamed Bobbie Faye “Sundance” because they are about to die. At the end, she calls him “Butch.”)

Everything else I’ve had published in fiction has been titled by others. I’ve managed the blog entries more like a drunken game of dice… sometimes I’m on, sometimes not. (Cornelia, I think, wins the memorable title aware around here. Seriously, tell me you do not think of the PILGRAMS! SCREE! SCREE! SCREE! title every time you see her name on Saturdays.)

Which, honestly, is the point: titles should be memorable. They should give you some idea of the kind of book you’re picking up, the genre, but most of all, you should be able to recall that title when you’re in the bookstore and are suddenly faced with thousands of choices… many of which sound so similar to one another, they all start to blur.

A good title will make me pick up the book, even if the cover art is so-so. I’ll flip over to at least read the back cover. An average title that sounds like every other average title would have to have really eye-catching art for me to stop, unless I already know the author’s work and therefore know whether they’re an automatic buy.

But a great title will stop me in my tracks when my arms are already loaded down with books and people are waiting on me to leave because we have to be at dinner in less than ten minutes and could I please please hurry? When someone (whether it’s the author or the editor or the marketing department or some combination, I don’t care) comes up with something that riveting that can stop me like that, I will pick up the book and read the back copy and the cover flap and probably the first page or so. If I’m really pressed for time, and that title was great, I’ll buy it, without reading anything. My hunch is, people who are that creative have a good eye for good material. I’m not always right about that instinct, but I’ve been right more than I’ve been wrong, so I’ll keep going by that gut feeling.

Examples of books I bought this past year based solely on the title, not word of mouth or knowledge of the author:

The Girl With The Dragon Tattoo

The Sky Always Hears Me

The Book of Unholy Mischief

The Bridge of Sighs

Hotel on the Corner of Bitter and Sweet

Granted, I heard about a couple of them somewhere, but when I was in the bookstore, I couldn’t remember what had been said–but the title jumped out at me as a “Oh, yes, I’d wanted to get that.” And I haven’t read all of them yet, since I was sidetracked with a couple of other big reading projects.

It is an extremely difficult thing to do, to find a memorable, unique title. I know some writers who cannot move forward with the first page if they don’t have a title in mind–one they hope will be their final title. I felt that way during book one, but since then, I haven’t ever managed to settle on just one, to fall in love with something and know it was it and that it would be memorable. Oh, how I wish I could.

Right now, I’m tossing around ideas for titles for the new book, and it will probably end up being vastly different from my past titles since this book is much darker and complex and set in a different world. I’ve wandered around ideas of things lost and found again, and I’ve played with ideas based off Saints (the name of the fictional town is St. Michaels, a tiny place set just south of Baton Rouge). For an example, I loved the movie title THE BOONDOCK SAINTS, (and I enjoyed the movie, but haven’t seen the sequel)… but obviously, this is taken and well-enough known not to be re-useable. Titles, unlike works, are not copyright protected, but I’d truly prefer not to use something someone else has already fingerprinted. I thought of BACKYARD SAINTS, but I think Joshilyn Jackson’s next book will be titled something like that, so that one’s out. I’ve thrown around war notions and betrayals, but so far, nothing sticks. If any one of you gets creative in the comments and I end up using it, you’ll be mentioned in the book and will get the first autographed copy.

I’m looking for inspiration. What titles have you come across (whenever, doesn’t have to be recent), that you loved and remember? I’m curious, did the book live up to its title?