I’m in Colorado for the Rocky Mountain Fiction Writers “Colorado Gold” conference. This is new experience for me. I’ve spoken to thriller/mystery writers and romance writers, but never a multi-genre “fiction” writers group.

I presented my “No Plotters Allowed” workshop, which I always like to give. As I tell the audience at the beginning, they really only need to take one thing from the workshop: There is no one right way to write, but there is a right way for you. I created the workshop years ago (before my first book came out) because I was tired of well-meaning people telling me I had to do this or that (write an outline, create a GMC chart, use the snowflake method, know my theme, identify the black moment–what the hell is the black moment? Yes, that’s a rhetorical question. Sort of.) So I devised the workshop originally with my pal Patti Berg to give people permission to write the way they want that moves them forward. It’s the right way if you’re making progress; it’s the wrong way if you aren’t. Simple.

And then I go off on a hundred tangents and hope people have lots of questions. I love questions 🙂

I haven’t attended any other workshops because I have a book due in three weeks and need to write every day, so have been putting in 4 hours a day writing, netting 6500 words in two days. I tend to write more when I’m NOT at home–which is why I go to Starbucks when I’m stuck or when I’m close to deadline and need to increase my writing pace. Fewer distractions.

Now, it’s Saturday night (because I never get my blog done early) and I’m in my hotel room after listening to an AMAZING keynote speech by Bernard Cornwell, who writes historical fiction. Maybe because he has a British accent, or maybe because he’s just a great speaker and hilarious to boot, I’m a bit panicked. I’m speaking tomorrow at the luncheon. I can not compete with his performance or wit, and I have no accent to hide behind.

I’d planned on giving the speech I haven’t given to three different conferences. I wrote it for the New Jersey Romance Writers in 2009, and got derailed after three pages. I then attempted it at the Moonlight & Magnolia’s conference in 2010–but I had cut it down and (nearly) got through the whole thing before I went off on a story. So I attempted it again at the Dreaming in Dallas conference earlier this year … and don’t think I got through more than the opening.

This would have been my fourth attempt.

But I’m thinking maybe the speech just isn’t worth telling. So now, instead of going down and drinking in the hospitality suite, I’m taking the speech apart and trying to find the good parts and write something around them. Maybe it’s just because I’ve read it so many times that I’m finding it boring. Or maybe because I just listened to a funny and poignant speech that was both inspiring even as he told everyone not to become a writer.

And then I wonder, why do I agree to do these things?

Truth is, I enjoy conferences and presenting workshops. The speeches, not so much, but I get through it. And I’ll do it this time. Even if I end up not giving the speech I write. 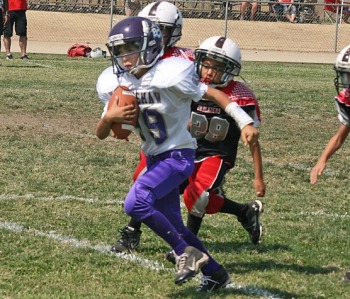 This weekend has been a busy weekend in the Brennan house. I’ve had this Colorado conference on the calendar for nearly a year. Then after school starts, I learn that my oldest has a volleyball tournament in San Diego (and yes, she arrived on Thursday in the midst of the power outage!); my #2 daughter has a cross country retreat in Lake Tahoe; my sons have an away football game; and my youngest daughter has her first soccer game. Fortunately, my mom was able to take care of the soccer game (yeah, grandma!) so my husband could take the boys to the football game. Soccer game: Victory! 7-1. Mighty Mites (6-8 year olds) football game: Victory! Come from behind to win 13-12. Jr. Pee Wees (8-10 yrs): They lost BUT my son, #49, caught his first pass in a game. A 20 yard throw, and he ran an additional five yards before being tackled. I’m sorry I missed the catch (but not sorry I missed him being tackled!)

And finally, we all know what day it is today. I didn’t want to write a blog summarizing what we all know happened ten years ago, or reliving where we were or what we were doing–but I do want to recognize the amazing men and women who sacrificed so much. Those who died. Those who cleaned up. Those who rebuilt. America is an amazing country, and we truly have amazing people. And even though I may complain about this or that on occasion, there’s no place I would rather live.

I apologize in advance for not being around much of today, what with the speech I’ll be giving and then pre-speech panic attack. But I hope you’ll share a good book you’ve read recently, or a movie that you were surprised you liked. I saw SUPER-8 earlier this summer. I expected it to be ok; I ended up really enjoying it.

14 thoughts on “How Many Times Can I Not Give the Same Speech?”