E-books and e-readers are topics of conversation everywhere, and no place more so than among authors.

I could discuss any number of things related to e-books, but the topic could fill a novel—far more than I want to write on a Saturday night!

I think that there are two truths that most people can agree with, to differing degrees. One, e-books are here to stay and they’re a growing market. And two, print books will continue to sell.

I honestly don’t care how readers read my books. If they enjoy them electronically or in print or listening to them on tape or download. Truly, my job is to entertain by telling a good story.

At some point—when, I have no idea—there’ll be a balance between e-books and print books, just like there is a balance between hardcover and paperback releases. This unknown is one of the reasons that publishers are in a tizzy—it’s nearly impossible to plan print runs and create marketing plans when readers are all over the map. When an author like myself—a mass market commercial fiction author—has a book out there was a plan. But those plans are constantly in flux because of the unknowns.

We can say that ebook sales are increasing exponentially, but every author—with a particular eye to format and genre—is affected differently. My ebook sales are still in the single digits of total books sold. I know a lot of people who are selling upwards of 35%–most, if not all, of these authors are published in hardcover. Some of my mass market friends are seeing low two-digits—10-15% e-book sales, but most mass market authors aren’t getting the near half sales electronically.

So there are a lot of unknowns!

I’m not discounting the quantity, because I know that hardcover authors are selling very well electronically, but we need to compare apples to apples if we can possibly plan for future books as well as know our audience.

For example, according to “Self Publishing Resources,” the average POD (which I am assuming includes self-published books, but I can’t be certain based on the wording) sells 75 copies, and Author Solutions reports that they sell on average of 150 copies of each of their self-published novels. According to a New York Times report in early 2009, when Bertram Capitol merged with Xlibris, they published six times more titles than Random House—the worlds largest publisher.

Quantity of titles doesn’t equate to success. Well, the vanity press companies are certainly successful, for one article on the Self Publishing Resources website states that 81 percent of the American people believe they have a book in them. And with the ease of getting that book published, there are now over 480,000 titles published today (2009.)

But the vast majority of those titles are selling less than 1,000 copies. One report I remember reading (but can’t find though I searched!) is that only 25,000 titles have a print run in excess of 5,000.

My point is that the big sellers are driving the digital train just like they drive the high print runs. I think when the New York Times starts their ebook bestseller list, that’s going to prove that it’s still the John Grishams and Lee Childs and Nora Roberts and Stephen Kings of the world that are dominating the sales. There will be new up and comers for certain, just like on the traditional print lists, but as more digital titles are available, readers will still gravitate to their comfort reads and proven authors.

I’m certain that there will be a lot of changes to come, some exciting and some scary. We don’t really know what’s going to happen, only that more people will move to reading some or all of their books digitally. And because this is technology based, it happens faster than other changes.

Decisions based on fear and not fact will only hurt authors—and, in the long run, readers. We need statistics that make proper comparisons, such as comparing e-book sales to print sales on those titles that are available in both markets. Unknown authors who think that they can break into digital publishing and make it big have a lot of work ahead of them—just because you can keep more money from each book sold doesn’t mean it’s the right decision. Or the wrong decision. Because of the potential for entrepreneurs who have both talent and marketing sense, there will be success stories. It’s inevitable. And I think that’s great.

But none of that means death to print publishing. 8% of the reading public owns an ereader—and that is expected to double within the next six months. And those who own ereaders are more likely to read more books. But there are still a lot of people who state they will not be buying an ereader in the next year. According to Harris Interactive (which I hesitate to quote because it’s an opt-in poll of people who are online and thus not a cross-section of all readers) the two demographic groups least likely to own or buy an ereader in the next 6 months are the 65+ group and the 18-33 group. That these are people who are active online and not moving over to ereaders is significant—I only have my unscientific poll of my teenagers who, when I offered them an ereader, said, “Hell, no.” (And I have an iPad, so I’m not opposed to ereaders!)

But that’s the point—everything is changing so rapidly and data is incomplete. That’s why taking in the big picture and making smart, strategic decisions—both for authors and for publishers—is so important.

One experiment that my publisher is trying is releasing an exclusive electronic novella between the first two Lucy Kincaid books. Love Me To Death, the first Lucy Kincaid book, will be out on December 28, hopefully everywhere books are sold. Then on January 24, 2011, a novella Love Is Murder will be available everywhere electronic books are sold. Then Kiss Me, Kill Me, the second Lucy Kincaid book, will be out on February 22. I’m very interested in seeing the numbers—whether having an e-exclusive story increases e-sales of KMKM over LMTD, among other things. 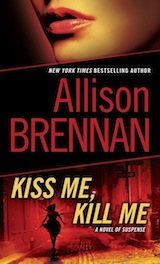 Yesterday, my editor sent me two printed copies of Love Me To Death. When I opened the package, the same warm, happy feeling came over me that I had five years ago when I received the first two copies of my debut novel The Prey.

So to celebrate the pending publication of my fifteenth book—which happens to fall on the five year anniversary of the release of my debut novel—I’m giving away a set of my first trilogy: The Prey, The Hunt and The Kill. If the randomly chosen winner already has those books, I’ll send them any set of my trilogies that they want. In print—because I have the copies.

So tell me . . . have you converted to reading ebooks and if so, are you mostly reading books published exclusively as ebooks; ebooks that are also available in print; or a mixture of both?