As we approach Christmas, I’ve been thinking about holiday traditions.  Holidays are probably most exciting for children.  At least for children who celebrate Chirstmas, what could possibly be better than Santa Claus, a reindeer-powered sleigh, surprise toys, and pretty, shiny decorations everywhere?

But for grown ups, Christmas could simply be a date on a calendar.  Particular for the self-employed, like writers, it could even be just another day at work.

My husband and I don’t have children.  We both work.  We have our routines.  And it would be so easy — tempting even — to just skip Christmas.

But I refuse.  Maybe it’s the memories of Christmas as a child, but I still need my holiday.  I wish little elves (or maybe some less creepy type of minions) would show up magically under cover of night and make Christmas happen, but it takes effort — and not only from me, but the people around me.  And so many of the efforts we make during the holiday season come from tradition.  Sure, some of these traditions are collective — decorated trees, stockings, and egg nog.  But many are created by families over generations or develop instantaneously because of some memorable moment that we want to continue to recreate.

Here are some of my holiday traditions.

I know.  Most of us who celebrate Christmas have the usual tree.  But my husband and I skipped the tree business for a couple of years because floor space in Manhattan is precious, and setting up a tree is a pain in the ass.  But a few years ago, we had dinner at one of our favorite neighborhood joints, Knickerbocker Bar & Grill, and something about the season hit us.  The restaurant was decorated with traditional white lights and garland.  Diners carried shopping bags filled with wrapped presents.  There was talk of an early snow.  We passed a row of Christmas trees outside the Asian deli next door, and I knew I needed to have a tree at home again.  We paid our cash, each grabbed one end of the tree, and dragged that bad boy up University Drive to our apartment.  Each year since, we always go to the same restaurant and deli for tree night. 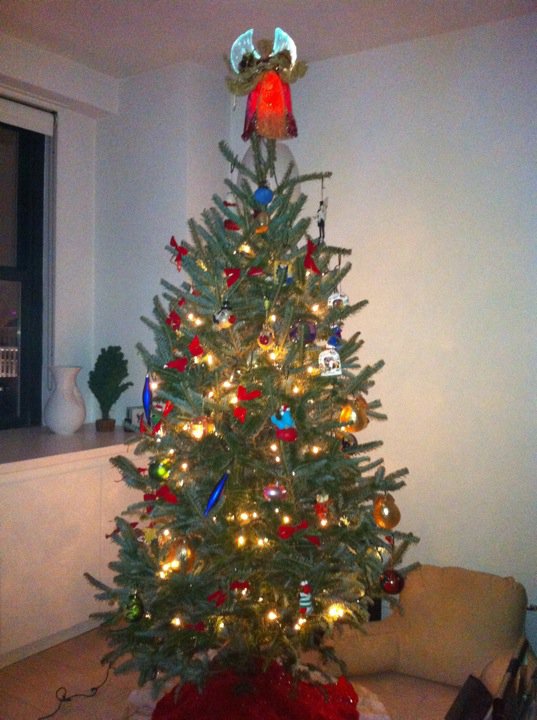 It’s not the best looking tree, but it contains memories.  I bought those red velvet bows at a drug store in Portland when I was too poor in college to buy ornaments but desperately wanted a tree.  That angel came from a landscaping store in Buffalo and was too tacky to ignore.  That sad-looking plastic shrub on the cabinet served as our tree for those two years we skipped the real thing, so still gets a place in the apartment next to its larger, more authentic sister.

Before I met my husband, I prided myself on my turkey-roasting abilities.  I stuffed the bird.  I basted every 15 minutes.  I monitored the temperature like a worried mother.  But then I met a boy who was fascinated by turkey friers.  I discovered an electric version that could be used indoors or out.  I bought said boy a turkey frier, a turkey, and 13 Manhattan-grocery-store sized jars of peanut oil for Christmas.  Our apartment smelled like french fries for three days (not that that’s a bad thing).

That boy’s now my husband, and we now have fried turkey at Christmas.

I have bad taste in music. Well, I don’t think it’s bad, but I’ve been told by enough people that it’s bad that I’ve come to accept that description.  My bad taste in music is also reflected in my choice of Christmas tunes.  I don’t listen to the classics.  They’re classics to me, mind you, but apparently not to others.  I love Christmas songs by pop stars.  The Pretenders.  U2.  Mariah Carey.  Madonna. The Waitresses (even though I spent years thinking this song was by Bananarama.)  Elton John.  Wham.  Harry Connick, Jr.  John Cougar.  Mellencamp.  Whatever.  Bing Crosby & David Bowie (though I dare anyone to say this isn’t classic, enough so to be spoofed in this version).

And every Christmas season, I listen to the Band Aid effort, “Do They Know It’s Christmas,” until my husband’s ears bleed.

Sure, I’m a sucker for TV’s the Grinch and Charlie Brown’s Christmas, but when it comes to movies, here again, I eschew the classics for more recent and less overtly Christmas-y fare. 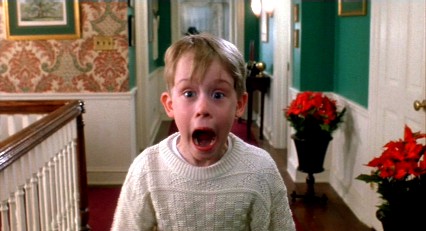 I watch these movies every single year at least once.

And every year, I have to watch at least this scene from “Scrooge.”  Thank you very much, Albert Finney.

My paternal grandmother sent us all the same gift every year: a box of Texas grapefruit and chunk of Havarti cheese.  She passed away at the age of 101 two autumns ago, but to my surprise, that familiar yellow Pittman & Davis box arrived in the mail the following December and showed up again last week.  My parents have been placing the orders, and my hope is that decades from now my nieces and nephews will be exchanging Texas grapefruits and Havarti for reasons they aren’t even sure of.

We spend Christmas Eve with my sister-in-law’s family so we can wake up at the crack of dawn to the sound of our eager nieces running down the stairs to discover that Santa did, in fact, arrive.  We open presents in our jammies, and our dog, the Duffer, gets his own stocking.

Speaking of Duffer, he has also become a part of our Christmas card tradition.  We love those photo cards people send out of their children so decided to replicate the effort with our dog, the Duffer.   The pictures were originally intended to be ironic, but I confess to finding intense joy in them now.  This year, his photo is with PetCo Santa Claus.  Neither of them looks very happy to be there. 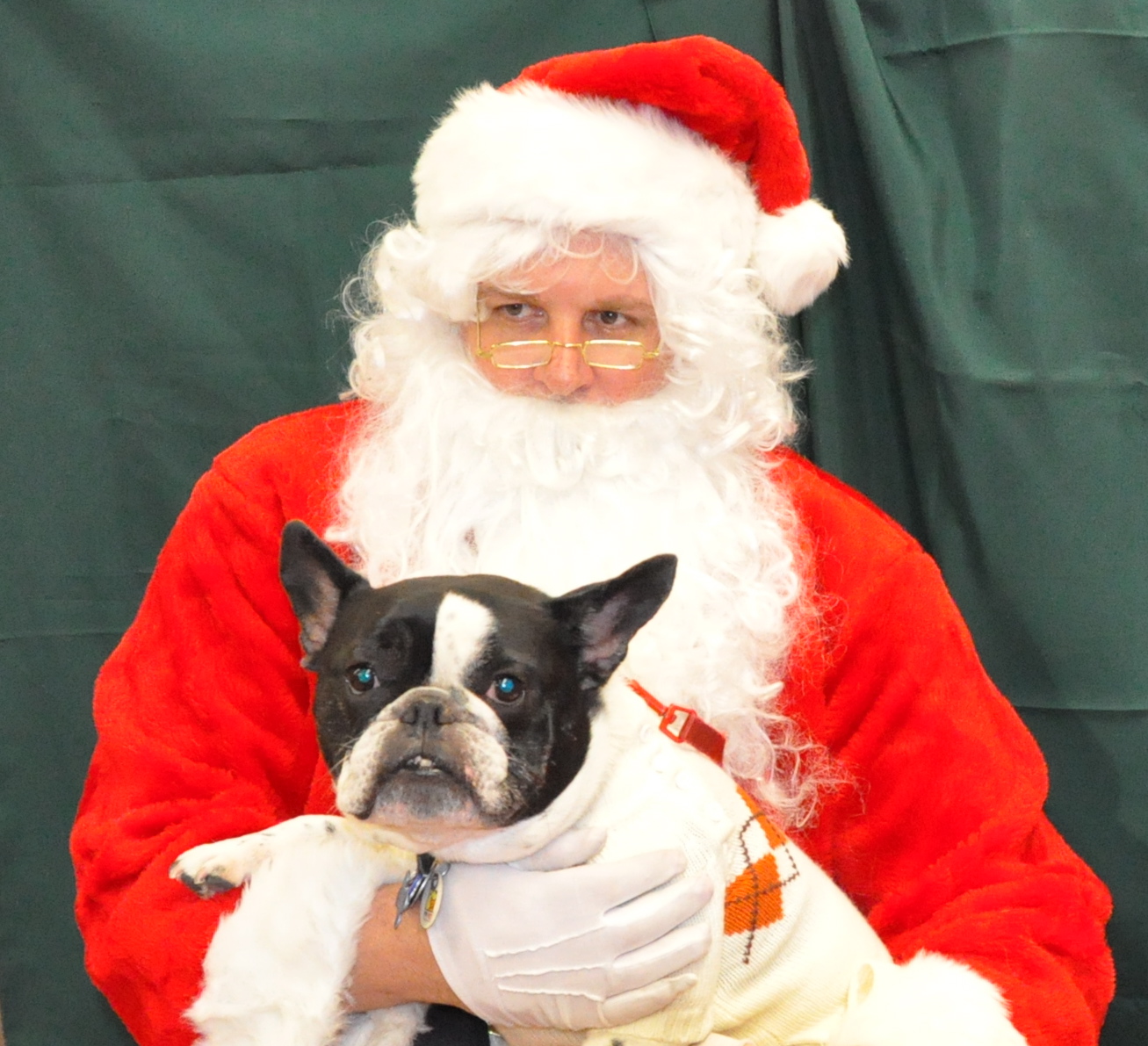 So what are your holiday traditions?