by
Anyone who’s read my books and blog knows that I’m all about using movies to learn the craft of writing – not just screenwriting, but very much novels, too. And like the other classic anti-totalitarian movie of the WWII era, The Wizard of Oz, this is much much more than a feel-good fantasy.
The story packs a staggering emotional and thematic impact on young and old (I used to show it to the incarcerated gang kids I taught in the Los Angeles County prison system, and it always bowled them over – they GOT it.
And there’s no better film to watch (and watch again, and again, and again) to internalize some of the most basic lessons of powerful storytelling. So this year, why not do a few minutes of prep before the movie and resolve to look out for how the filmmakers handle these KEY STORY ELEMENTS:
Get free Story Structure extras and movie breakdowns

INNER AND OUTER DESIRE:
One of the most important steps of creating a story, from the very beginning, is identifying the protagonist’s overall DESIRE and NEED in the story. You also hear this called “internal desire” and “external desire,” and “want” and “deep need” — but it’s all the same thing. A strong main character will want something immediately, like to get that promotion or to get the love interest into bed. But there’s something underneath that surface want that is reallydriving the character, and in good characters, almost always, those inner and outer desires are in conflict. Also, the character will knowthat s/he wants that outer desire, but will probably have very little idea that what she really needs is the inner desire.
So you, the writer, have to know your character’s inner and outer desires and how they conflict.
It’s A Wonderful Life is one of the greatest filmic examples of inner and outer desire in conflict. From the very beginning, George wants to see the world, to do big things, design big buildings: all very male, external, explosive goals. But his deep need is to become a good man and community leader like his father, who does big things and fights big battles — on a microcosmic level, in their tiny, “boring” little community of Bedford Falls, which George can’t wait to escape.
Every choice George actually makes in the story defers his external need to escape and ties him closer to the community that he becomes the moral leader of, as he takes on his late father’s role and battles the town’s would-be dictator, Mr. Potter. George does not take on that role happily — he fights it every single step of the way and resents it a good bit of the time. But it’s that conflict which makes George such a great character that we emphasize with. It’s a story of how an ordinary man becomes a true hero.
STATEMENT OF THEME:
A reader or audience will get restless if they don’t have a good idea of what the story is within the first five (I’d even say three) minutes of a movie, or the first twenty pages of a book. Sometimes it’s enough to have just a sense of the central conflict. But often, good storytellers will make it perfectly clear what the theme of the story is, and very early on in the story. In the first act of It’s a Wonderful Life, in that scene in which George is impatient to leave pokey little Bedford Falls and go out in the world to “do big things,” George’s father tells him that in their own small way, he feels they are doing big things at the Building and Loan; they’re satisfying one of the most basic needs of human beings by helping them own their own homes. This is a lovely statement of the theme of the movie: that it’s the ordinary, seemingly mundane acts that we do every day that add up to a heroic life.
And by the way – this theme is overtly stated in our very first glimpse of the adult George:
INTRODUCTION OF THE MAIN CHARACTER:
“Nope, nope, nope, nope, nope, nope, nope. I want a big one.”

And freeze frame on that hand span… a fabulous, funny, sexy introduction. (That big, huh? Mmm.) This intro goes on to tell us something about George Bailey’s outer DESIRE line: he wants to do big things, build big things, everything big. In fact, the story will be about how all the little things George does in his life will add up to something more than simply big, but truly enormous.

HOPE/FEAR and STAKES
Just as good storytellers will be sure to make it perfectly clear what the main character’s inner and outer desires are, these storytellers will also be very clear about what we HOPE and FEAR for the main character. Generally, what we hope for the character is the same as her or his INNER NEED. In It’s a Wonderful Life, we hope George Bailey will defeat Mr. Potter. We fear Potter will drive George and his family into ruin (and George possibly to suicide). Our fear for the character should be the absolute worst-case scenario: in a drama, mystery, or thriller we’re talking madness, suicide, death, ruin, or even the end of the world. (This is also what is AT STAKE). In a comedy or romance, the stakes are more likely the loss of love.

The person whom the protagonist is fighting is often a dark mirror of the protagonist; in many stories we see that it wouldn’t take much for the hero/ine to become the antagonist, metaphorically speaking. The hero/ine and the antagonist often want the same thing, whether it’s an actual object, like the lost Ark of the Covenant or the Maltese Falcon; or money; or a power, like control of a town in It’s A Wonderful Life) or control of a country (The Lion in Winter) or control of a family (Another Part of the Forest); or a person: a child (Kramer Vs. Kramer) or a lover (five billion romantic comedies).

Of course Potter is a wonderfully evil villain, perfectly played as a huge human spider by the great Lionel Barrymore. The deal with the devil scene in which he almost – almost succeeds in getting George to sign his soul away is a masterpiece all on its own. But what’s particularly interesting about IAWL is that the battle is taking place on several different levels – in George’s massive internal conflict, the particular antagonist of Mr. Potter – but the real opponent is bigger. George is not just fighting Mr. Potter, but a whole way of life that is anti-community, that destroys community and individuality. It’s a Wonderful Life, like The Wizard of Oz, is an anti-totalitarian statement made in the midst of a massive battle against totalitarian forces of World War II.
And couldn’t we all use that, right now?
FINAL BATTLE:
This is not the classic “hero confronts villain on villain’s home turf” third act. In fact, Potter is nowhere around in the final confrontation, is he? There’s no showdown, even though we desperately want one. There’s not even a hint that Potter will be punished in any way for essentially stealing the Building and Loan money from Uncle Billy and then compelling the police to arrest George for the theft.
But the point is that George Bailey has been fighting Potter all along.
There is no big glorious heroic showdown to be had, here, because it’s all the little grueling day-to-day, crazy-making battles that George has had with Potter all his life that have made the difference. And the genius of this film is that it shows in vivid and emotionally wrenching detail what would have happened if George had not had that whole lifetime of battles against Potter and for the town. Every single encounter George Bailey has had throughout the film is an example of a small, ordinary goodness, a right choice that George makes, that in the end, when we and he see the town as it would have been if he had never existed, lets us understand that it is those little things that make for true heroism. In the end, even faced with prison, George makes the choice to live to fight another day, and is rewarded with the joy of seeing his town restored.
This is the best example I know of, ever, of a final battle that is thematic — and yet the impact is emotional and visceral. It’s not an intellectual treatise; you live that ending along with George, but also come away with the sense of what true heroism is. 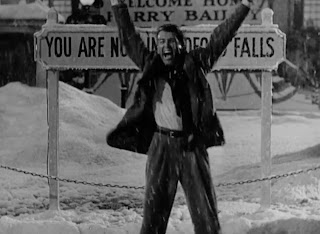 It’s A Wonderful Life is also a terrific example of emotional exhilaration in a climax. Once George Bailey has seen what would have happened to his little town if he had never been born, and he decides he wants to live and realizes he is alive again, the pleasures just keep coming and coming and coming. It is as much a relief for us as for George, to experience him running through town, seeing all his old friends and familiar places restored. And then to see the whole town gathering at his house to help him, one character after another appearing to lend money to pay off his debt, Violet deciding to stay in town, his old friend Sam wiring him a promise of as much money as he needs – the whole thing makes the audience glad to be alive, too. We feel, as George does, that the little things we do every day do count.
This is a great lesson, I think, that above all in an ending, the reader/audience has to CARE. A good ending has an emotional payoff, and it has to be proportionate to what the character and the reader/audience has experienced.
There’s so much more I could say (and have said!) about this film and all the story elements of it, but yes, time is short and shopping lists are long. At least now you have a chance to do some writing work while it looks like you’re playing – one of my favorite writerly tricks.
Happy Solstice, Happy Hanukah, Happy Kwanzaa, and Merry Christmas to all.
It’s been a brutal year, but it really is a wonderful life. Definitely worth fighting for.
– – Alex
=====================================================

a All the information on this blog and more is available in my Screenwriting Tricks for Authors workbooks.

STEALING HOLLYWOOD
This new workbook updates all the text in the first Screenwriting Tricks for Authors ebook with all the many tricks I’ve learned over my last few years of writing and teaching—and doubles the material of the first book, as well as adding six more full story breakdowns.