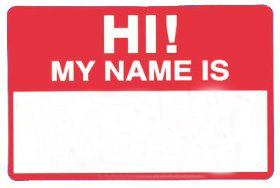 Several things sparked off this week's post. The first was raised by one of Dusty's excellent questions of the course of his last two 'Rati posts. He asked (and I'm paraphrasing here) if you had ever bought an author's book after visiting their website, or if you'd only visited the site after reading the book.

That got me thinking about what is an author website for, exactly? So, I went looking at a number of different sites to try and answer that question, at least in my own mind. I put my reader's hat on and went surfing. In order to do this, I went mainly (but by no means always) to sites of authors I had certainly heard of, but ones whose work I was not particularly familiar with. What I was looking for was something to really hook me into the writing, the stories, the characters. I was looking for something that would turn me from a casual browser into a fan.

And, I have to say, there are many, many wonderful websites out there. Well-designed, easy to navigate, informative. Most have extracts of the author's work so you can try out their voice, some even have audio extracts, read by the author, so you can hear the words spoken exactly as the author intended, with all the emphasis in the right places.

But one oddity struck me.

Where an author writes a mystery or thriller series with a continuing character, the character often seems to become bigger than the books. Yet there's also some assumption made that, if you've got as far as the website, you must already know a certain amount about this character. Very rarely did I find any kind of detail on a website about the kind of person the series protagonist is, other than the couple-of-word description found in the dust jacket copy. Is that enough, or do you need to know what makes him or her different from the next character?

Because, as everybody seems to accept, the characterisation is one of the main qualities that keeps readers coming back to a series. Or to an author, for that matter. But how can a potential reader glean much from a brief book-jacket-type description of who and what the main character is and does?

You see, one of the things that nudged me in the direction of this week's blog was the fact that I am at the dreadful thumb-twiddling stage of being Between Books. One is delivered to my agent, and I am awaiting her verdict with some trepidation before I plunge into undoubted rewrites. Meanwhile, of course, I have been kicking around some ideas for a new book, with a completely new main protagonist and set of characters. This does not mean that I intend to abandon Charlie Fox, by any means, but on the theory that a change is as good as a rest, I feel the need to stretch my wings a bit and try out something fresh.

And when I see my agent next week, I'm faced with the prospect of explaining, in a pithy kind of way, not only what the initial story is all about, but why I feel this new main character – and the immediate supporting cast – is worthy of consideration.

So, I not only require my elevator pitch for the story itself, but I also need a brief but grabby description of my new protagonist.

I need a character pitch.

And that's been a very interesting proposition, because it's made me re-evaluate what I say about Charlie when I'm asked the question, "So, who's your main character, then?" The pat answer is that she's a no-nonsense ex-British Army Special Forces soldier turned bodyguard. OK, so that tells me what she is, but not who. It's too easy to say, "Oh, she's like (insert appropriate well-known fictional hero or heroine here)." Charlie has been likened to female versions of both Jack Reacher and James Bond, but neither are quite a comfortable fit for her, I think.

Working out exactly who your protagonist is, and summing it up in a few catchy sentences, is a daunting task. Other people often do it so much better than the author can manage. Paul Goat Allen came up with a wonderful one for Charlie in the Chicago Tribune: "Ill-tempered, aggressive and borderline psychotic, Fox is also compassionate, introspective, and highly principled." I have to say a big thank you to him, because I use that one a lot. It tells it relatively straight. I probably wouldn't have come up with that description, but I can't argue with it and it doesn't kid potential readers what the character is all about and what to expect from her, and from the books.

But what about this new one?

We had a quick 600-mile work trip last weekend, which gave me plenty of time in the car to jot down some notes. I wrote down anything and everything that occurred to me about this new character. I now have pages of scribblings and I'll let you know if they met with approval or not – but not until after I've tried them out!

But, I will say that a snatch of a Counting Crows song, 'Round Here' kept coming to me, so I wrote that down, too:

'She knows she's more than just a little misunderstood/She has trouble acting normal when she's nervous.'

It doesn't quite fit the character, but there's a sliver there, an inkling, an idea.

So, my question is, what's your character pitch? Not just what they do, but who they are as well?

Or, how would you pitch your favourite literary character, in a couple of sentences, to a new reader who'd never come across them before?

This week's Word of the Week is harbinger. I picked this because I used to know a chap who had a boat called Harbinger and everyone pulled a face when he told them the name, and said, "That's a bit gloomy, isn't it?" because hardly anybody can hear 'harbinger' without the words 'of doom' on the end of it, but this is not the case. In obsolete language, a harbinger was a host, or someone sent ahead to provide lodging. But now it's come to mean not just a forerunner or a thing which tells of the onset of something, but also a pioneer.

It's a bit like the phrase in flagrante delicto, which is simply to be 'in the very act of committing the crime, red-handed' and does not necessarily mean 'unclothed, with someone else's spouse, in a cheap hotel room …'