Last night I glimpsed a new neighborhood in New York: Bay Ridge.  I know, I know, Bay Ridge has been around for-evah.  It’s also nothing new to creative types.  Tony Manero lived there in Saturday Night Fever.*

So did Peggy from Mad Men, announcing, “I’m from Bay Ridge.  We have manners.”

But nearly a decade since I left Oregon for New York, I am still learning about this city.  Last night the subject was Bay Ridge.  I was there for a book event (terrific store in Bookmark Shoppe, by the way), so took some time to check out the neighborhood.  I even made my local friend, Jeff, show me the home several customers referred to as the “gingerbread house.” 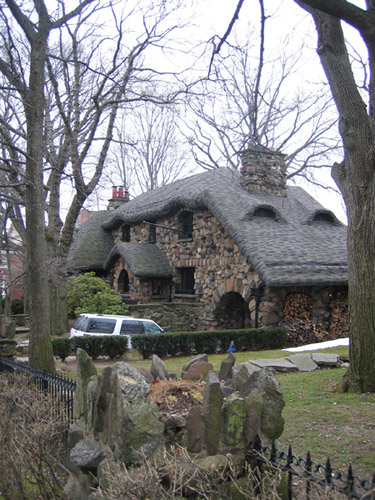 Rumor has it that the garage floor rotates like a turntable so the owner doesn’t have to back the car out.  Pretty sweet.

Do I know the ins and outs of Bay Ridge as well as Jeff?  Of course not.  Could I set an entire novel there with authenticity?  I doubt it.  But I saw enough of 3rd Avenue, 83rd Street, Shore Road, the Fort Hamilton Athletic Field, and the gingerbread house to set a scene there.

But what if I hadn’t seen the place?  I could read about it on Wikipedia.  I could stroll its streets on Google Maps.  I could also make it up from whole cloth.  Would it really make a difference?

For reasons I haven’t fully identified, I’m uncomfortable writing about places I don’t know.  I mean, really know.  Ellie Hatcher’s backstory is in Wichita, Kansas, where I spent fourth through twelfth grade.  Ellie works for the NYPD, and her life takes place almost entirely in the pockets of Manhattan I know best.  Her apartment is in the same spot as my husband’s former place.  Her latest homicide case occurs in the fancy new condo building across the street from me.  Samantha Kincaid is a prosecutor in Portland, Oregon, where I lived for nearly a decade (and worked, yup, as a prosecutor).

Why do I make these choices?  Maybe I’m just lazy.  Research, after all, is not my favorite part of the fiction gig.  But I think there’s more to it.  After all, starting a second series set in New York (the Ellie Hatcher series) was definitely not a lazy move.  I had plot, character, and procedural reasons for doing so.  But that move was also about place.

Five years after leaving Portland, I was starting my fourth Samantha Kincaid novel and wrote a scene I knew just wasn’t right.  I went for a run to figure it out.  Sure enough, I had Sam hailing a cab outside a witness’s house in the West Hills.** Homey don’t play that.

I not only caught the mistake, saving myself from the “you’re-an-idiot” emails that surely would have followed upon publication, but I also took it as a strong hint that my imaginary life in Portland was growing dusty.  At the same time, I realized I had finally become (gasp) a New Yorker.  I decided to try my hand at this new town of mine, at least the Manhattan parts, and think I’ve managed to capture the place pretty well.  I even named my most recent novel 212 (the original Manhattan area code) to highlight Manhattan as a main character.  My writing will get back to Portland when the time is right, but I’ll probably only jump in after rekindling my relationship with the city.

I do, however, realize this is likely a whole lot of ridiculousness on my part.  Plenty of writers continue to capture the magic of places they’ve long left behind.  Michael Connelly no longer lives full-time in Los Angeles.  JLB wrote the first four books in the Dave Robicheaux series from Kansas.  Even the miraculous Lee Child can’t possibly live in all those Jack Reacher stops (or can he?).

What do you think: When a writer truly knows a place, does it make a difference on the page, or only in the writer’s mind?

* I have so much love in my heart for Saturday Night Fever that it took incredilble restraint not to insert a 400-word digression here about the brilliance that is that film.  Please tolerate this footnote instead.

** Lest you’re wondering, these are the same West Hills referenced in the Portland band Everclear’s “I Will Buy You a New Life.”  No cabs there.  Trust me.

P.S. I’m out on tour still, this time in Washington DC (Borders, Bailey Crossroads, 7:30 PM).  I’ll be checking in as I can, but forgive me if I’m slow to acknowledge your comments.  I want to see them though, please!