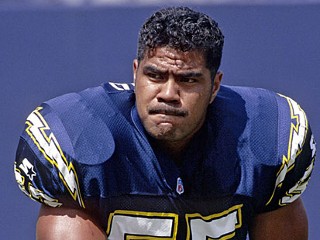 When former NFL great Junior Seau committed suicide last week at the early age of 43, by all reports, it came as a complete surprise to everyone who knew him.  In stark contrast to his reputation as one of the fiercest defensive players the game has ever seen, Seau was a beloved, jocular human being on and off the field, a man whose energy and joie de vie rubbed off on friends, teammates and family members alike.

And yet he took his own life before the age of 50, leaving no clues behind to help explain why.

Because the self-inflicted gunshot wound that killed him was to the chest, rather than the head, people familiar with the recent history of the NFL (National Football League) suspect Seau’s motives for suicide may have been identical to those of Dave Duerson, another former pro who killed himself in a similar fashion only 15 months ago. 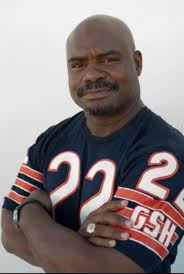 Duerson had struggled for years with various symptoms of CTE (Chronic Traumatic Encephalopathy — as brilliantly described by guest blogger Kathryn Fox yesterday), brought on by the multiple concussions he’d suffered throughout his playing career, and taking his own life, it seemed, was his way of escaping a future that promised only more of the same.  He’d shot himself in the chest, a text message he sent his ex-wife before pulling the trigger explained, to keep his brain intact for researchers studying the long-term effects of CTE on former players like himself.

As Junior Seau had suffered multiple concussions of his own prior to his retirement in 2010, it’s at least improbable that the similarities between his suicide and Duerson’s are just coincidence.  In the absence of any concrete evidence to that effect, however, all anyone can do to understand his final act is speculate, and wonder why, if his troubles were so grave, he never sought help from any of the many people who loved him.

What does a cry for help sound like under such circumstances?  Does anyone really know?  Ideally, of course, it would be short, sweet, and impossible to misconstrue: “Help me.  I’m in pain.  So much pain I’m thinking about taking my own life.”  But who ever speaks that openly, that frankly, about themselves?  Who has the kind of humility required to admit to such vulnerability?

Junior Seau was a former professional football player, a future Hall of Famer in one of the world’s most violent sports, so it’s easy to understand how difficult it may have been for him to reveal his troubles — whatever they were — to anyone.  But Seau was also just a man, and men as a general rule don’t come to admitting weakness — let alone asking for help to overcome it — naturally.

Old fashioned though it may be, the idea that a man is supposed to be invincible — capable of fending for himself under any and all circumstances — is still very much in effect for most of us.  It’s how we were raised to think, it’s the example we saw set by our fathers and their fathers, and their fathers before them.  It’s the through-line of every ham-fisted adventure story we ever read or heard told around a campfire: A man survives.  A man provides.  A man bends but he never breaks.

But of course, some of us do break.  At the whim of love and pride, among other things, we fall short of our great expectations and go to pieces.  And some of us even do the unthinkable first: We ask for help.  We just don’t do it in a way that’s easily recognized for what it is.  We take the edge off, put bells and whistles on the plea so that the desperation behind it — the terrible, soul-crushing desperation — doesn’t show through.

I speak from experience.

No, no, put down the phone!  I’ve never contemplated suicide.  Ever.  The God I believe in has never allowed things to spiral that far out of control for me, and I know with absolute certainty he never will.  But my life has never been, and is not now without, shall we say, the occasional threat of rain.  In fact, I’ve come close enough to losing everything I hold dear in this world to feel the draw of the abyss, to at least wonder how much worse death could possibly be than another day living in pain.

When I find myself asking that question, I ask for help.

But I speak in code.

I make my need sound like a nuisance, my level of discomfort akin to a sore tooth.  I don’t talk about life and death, or the shedding of a single tear.  I choose my language carefully, so as to avoid any suggestion that what I’m asking for is nothing less than my last hope.

Sometimes, a friend will see past all the camouflage and bullshit to the harsh truth underneath, but mostly, no one ever does.  They just see what I’ve allowed them to see: one more disheartening message from yet another poor devil of their acquaintance looking for work.  And what, in these hard times, is unusual or alarming about that?  There’s no need for panic.  Everyone remain calm.  Bankruptcy is not a fatal disease.  Divorce is not the end of the world.  Hell, it’s not like Haywood said he was going to throw himself off a fucking bridge if he didn’t find a job soon, right?

Or blow a hole in his chest with a gun?

See, that’s the trouble with cries for help, especially those that come from a prideful man: They don’t always sound like a “cry” at all.