Every time someone asks me that question, I know the answer is probably going to be no. I cringe sometimes, wondering what author’s name they are going to throw out at me, and how stupid I’m going to look when that “no” slips from my lips. It’s inevitable.

See, not only are there just too many books to read ‘em all, but, personally, I have some gigantic holes in my reading history.

Don’t get me wrong. I’ve pretty much been reading solidly since about fifth grade. At different points in my life I’d read a couple books a week. (I realize there are some of you out there who read almost a book a day. Wow. That has never been me.) There have also been points in my life – mainly during particularly stressful periods when I had a day job – where I was lucky to read a book a month. But no matter what, I always have a book I’m reading.

Thanks to my father, I started my reading life in the world of sci-fi. He was, and continues to be, a huge fan of the genre. I ripped through Asimov’s FOUNDATION series (trilogy at the time I started), through various books by Arthur C. Clarke, and nearly everything by Robert Heinlein. I read James White, a few by Phillip K. Dick, and bits and pieces of all sorts of others.

For a while the only thing I would let myself read was sci-fi. I remember one birthday my mother giving me a Western novel. I’m sure I said, “Thanks,” but I never read it. I was a purest. And, by definition an idiot.

Eventually my horizons broadened, and I started reading thrillers and adventure stories – almost everything by Alistair MacLean, THE EAGLE HAS LANDED by Jack Higgins, BLACK SUNDAY by Thomas Harris, and then, of course, the works of Robert Ludlum.

And as I grew older still, I’ve come to enjoy books of many different genres, but those holes remain. For example, because of my sci-fi fanaticism in my teens, I missed out on the whole pulp crime/intrigue world of fiction. Why? Because a) I just didn’t even know about it, and b) if I had I probably would have said, “Where’s the spaceship?”

By missing that chunk of our collective history, I had missed some of the greatest writers of our time. I know, I know. I should be taken out and shot. But before you pull that trigger, know that all of that has been changing over the last decade. Slowly at first, but really picking up speed now.

And thanks to the 31st Vintage Paperback Collectors Show & Sale here in L.A. held a few weeks ago, I’m moving into light speed catch up mode! If you’ve never gone to a classic paperback show, you should. They are unbelievable! Thousands of old crime and thriller and adventure novels. And –tapping into that old first love of mine – tons of vintage sci-fi stuff, too!

Now, admittedly, that number is cheating a little. I met up with someone who had offered to give me a box of books they didn’t want any more. Turned out to be a total of 100 books, most of where were part of the Edward S. Aarons’ ASSIGNMENT: series. There are 48 books in the series, I am now the proud owner of 44 them, with duplicates of most. Couldn’t be happier.

But beyond this wonderful gift (thank you, Michael & Jodi!), I purchased 38 more. One goal was to fill out missing parts of the MATT HELM series I didn’t own. Got some, still need more (but that means more happy searching in the future). Other finds were: THE MAN WITH MY FACE by Samuel W. Taylor, PERRY MASON THE CASE OF THE HESITANT HOSTESS by Erle Stanely Gardner, RUN SILENT, RUN DEEP by Edward L. Beach, THE SINGAPORE EXILE MURDERS by Van Wyck Mason, and LOVERS ARE LOSERS by E. Howard Hunt (yeah, that E. Howard Hunt.) 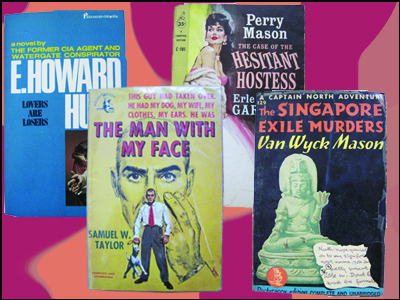 I also gave into that sci-fi boy inside and got about a dozen or so 50s era sci-fi novels. 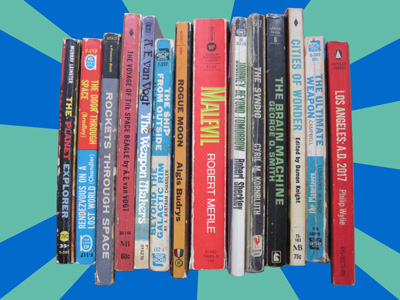 Kid in a candy shop? Yeah, that’s me.

But the best part is once I get through all of these, then when someone asks me “Have you ever read…?” I won’t tense as much waiting for the name. Sure, the answer is still going to end up being “no” more often than not, but the percentage will be less. And I’m working on tilting the scale the other way!

So, holes in your reading history? Are you doing something about it? And who have you read, but wish you had read sooner?