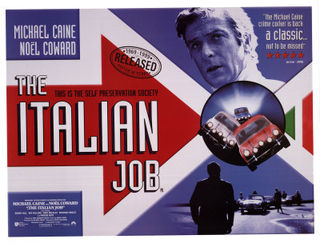 It has to be one of the best known classic cliff-hanger endings. The final scene from 'The Italian Job' with Michael Caine. The bus teetering balanced on the edge of the Alpine ravine, with Charlie Croker and his gang of gold thieves stuck watching their bullion booty sliding ever further towards the abyss as the bus rocks gently back and forth. Then Croker turns back to the gang and says, "Hang on a minute, lads, I’ve got a great idea!"

But what was it? And did it work?

This year is the fortieth anniversary of the original version of 'The Italian Job', and to mark the occasion The Telegraph in the UK held a competition to see if anyone could come up with that grand plan to rescue the gold. The rules were simple – no helicopters, and it must be a scientifically provable theory. Over 2000 people tried their hand, with solutions ranging from the surreal (Superman flies in and saves the day) to the comedic. One gentleman claimed to have "a foolproof way of recovering the gold. However, since the occupants of the truck are a bunch of criminals and the gold does not belong to them, I refuse to divulge the method."

So, how would you do it?

The eventual winner did indeed have a very cunning plan, as Baldrick might have said, which I promise to share with you later, but first I wanted to see if anyone here could come up with something equally ingenious? 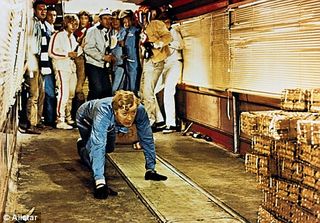 The reason for mentioning 'The Italian Job', and its ending, is that when we write a mystery or thriller novel, for me the ending is crucial. So often, it seems, a book can be front-loaded to the extreme. So much thought and energy – not to mention that low-down cunning – has gone into hooking the reader at the outset, that the eventual explanation can never hope to live up to it. I have even, on rare occasions, thrown a book down after the final page, feeling cheated.

There seem to be two main types of endings for the journey of your story. One is very circular, bringing with it some kind of closure or completion, and the other a lot more open-ended. According to Christopher Vogler in THE WRITER'S JOURNEY, which details mythic structure for storytellers and screenwriters, American culture tends to lean towards the circular, whereas Europe, Asia and Australia are happy not to have everything brought to such a neat conclusion. (And I do realise I’m speaking in generalisations here.)

Personally, I like some kind of conclusion, providing it doesn’t stray into the saccharine. I believe that is one of the reasons we are happy to read quite graphic and gory crime fiction. Because we know it’s all going to be all right in the end. Terrible things may happen in real life, inexplicable tragedies where nobody is ever brought to justice for what they’ve done, so we turn to fiction to provide that reassurance. We know that, although the ending might not be entirely happy, it will have some kind of a resolution that satisfies us.

Writing my Charlie Fox series, I have always tried to make the books free-standing, rather than standalones. Yes, there are continuing characters and there are returning characters, but I have always tried hard to make it so that if you pick a book up from later in the series, you won’t be baffled by in-jokes, nor will you encounter (too many) plot spoilers about what has gone before. Each plot is completely self-contained.

But that all changed with the last book, THIRD STRIKE. I ended with something that I knew would have to be addressed in the next book, and for the first time I realised I’d broken away from quite such a neat and tidy circular ending, and had left things a lot more open-ended.

I did a blog back in November last year, 'Tune in Next Week…' in which I talked about series books and whether it was possible to have cataclysmic change in a series, and the comments were very interesting indeed.

But this takes that question a step further. Do you need to have a neat and tidy conclusion to a crime novel? Does the hero have to catch the bad guy, or do you turn the bad guy into an ongoing nemesis of the Professor Moriarty ilk? To a certain extent, I feel this can lessen the threat posed by the villain. After all, if you know they’re not going to die, or get caught, then something of the thrill goes out of the chase. How long would greyhounds continue to chase the fake rabbit, if they were never allowed to catch it? 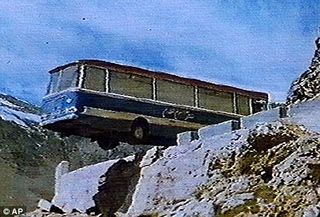 So, if you’d just written a thriller that just happened to be about a gold bullion heist in Turin, in which the intrepid heroes made their escape in three Mini Coopers, and ended with them pushing said cars out of the back of their bus as they drove over the Alps, celebrating their victory, would you, on the final page, be content to have the bus driver misjudge a corner and end up see-sawing precariously over the edge of a very long drop?

And, as a reader, would you throw the book against the wall if the final line was, "Hang on a minute, lads, I’ve got a great idea!" Would 'The Usual Suspects' have been quite as satisfying if you’d never found out the identity of Keyser Soze? Did it matter in 'Ronin' that you never find out what’s in the case?

As always seems to be the case at the moment, I’m away on photoshoots all day today, but will reply to all comments when I get back this evening, so please bear with me.

This week’s Word of the Week is dénouement, which means the unravelling of a plot or story, from the Old French desnoer, to untie, and nodus, a knot.

Book mail!!! Can’t wait to dive into this one. Thank you @LisaScottoline!

@ghowell69 Yes. It's hard to let go, but the last gift we can give them is mercy and rest.

@meadowgroove @ThatEricAlper It's what comes from hanging with musicians with very cool older siblings.

I doubt I could be as sanguine. My email is still my primary universe.

"A sense of panic set in as I realized I’d erased the entirety of my inbox," @thomaschattwill writes: http://on.theatln.tc/e1VcfRt