I find myself at a similar place as I was last August or so…thinking up ideas for the next book. Unlike last time, I don’t plan on going batshit crazy and write proposals for three different, potential novels. No, this time I’ll stick to one. Or, rather, two. One for a standalone, and one for the fifth in my Jonathan Quinn series.

“But, Brett,” you may say. “You have the two standalone ideas that weren’t chosen last fall. Why not use one of those?”

Believe me, I’m tempted. One, in particular, I really like, and, who knows, I might resubmit it anyway. But the truth is, I feel another story calling me. The interesting things is that I have no idea what the story is about.

I’ve heard the analogy that writing a novel (or, maybe, an outline for a novel) is like being a sculpture standing in front of a slab of marble. You know there’s a beautiful statue inside, you just have no idea what it looks like. That’s kind of the stage I’m at right now. I’ve got this slab of marble, I just don’t know what’s inside yet.

Now to get to that interior, to that story, there are a lot of different tools I can use. I can chip away, a little at a time by taking long walks and strenuous hikes. I can let my mind wander while I’m doing nothing. I can inundate myself with other forms or creativity – books, movies, TV, magazines, music – and see if I get inspired.

The past couple of days I’ve been using one of those specialized tools more heavily than I’ve done in a long time, or perhaps ever. 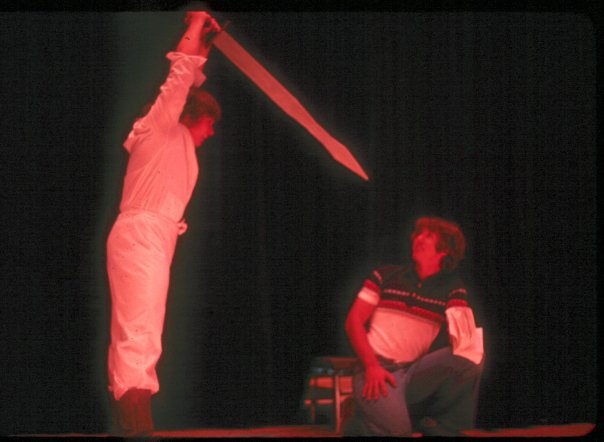 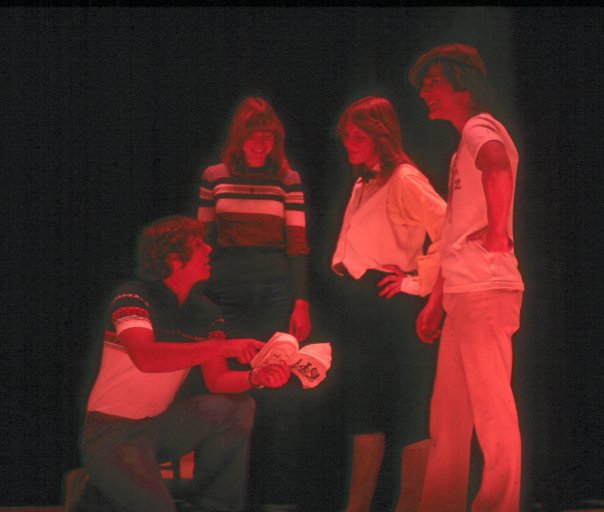 (That’s me kneeling in both pics…apparently that was my chosen directorial style.)

When I went off to college, my interests had moved to motion pictures, and I majored in film and television history. (Got to watch a LOT of movies during class. My all time favorite course was one our own Steven Schwartz and I – I think – took together…The Films of Alfred Hitchcock, or something like that. Awesome!)

Quite by chance, when I entered the working world I happened to stumble into the arena of graphic design for television, or what we called motion graphics. No, I wasn’t a designer, but I worked with designers everyday for what turned out to be almost twenty years. And when you work with graphic designers, you will find that visual stimulation is a daily event.

So it’s not surprising that the visual can be very stimulating to me.

Back in grade school (or was it junior high?), I got an assignment in an English class to create an essay/story by using only pictures found in magazines. If I remember correctly, we could add short headlines, but that was it. The pictures had to make the story. It was a great project, and, if you ask me, very forward thinking on my teacher’s part.

To this day, I still remember that project, and, in a way, am still utilizing the lesson learned.

Almost everyday I come across images on the Internet that stimulates me for some reason. Could be I just like the setting, or the face. Could be I like the atmosphere. I save these images to a folder on my desktop that I call Inspirational Pics. In the past I’ve looked through them on occasion. But this week, as I set out to cobble away at that chuck of rock that someone unceremoniously put down in front of me, I decided to try something new.

I created a new folder, then opened one with my Inspirational Pics. Slowly, I went through them, one-by-one. If one made me stop or otherwise called out to me, I put a copy of it in the new folder. By the time I was done, I had about two dozen images (out of the, literally, hundreds I’ve collected.) I then put these selected images in an order that made sense, and started to play them as a slideshow.

And you know what? There’s something there. I can feel it. I don’t know what it is completely yet, but I have discovered a main character, and I’m starting to see events – though hazy still – that take place in the story. I even wrote a couple pages that might be the beginning of the novel. The pictures really speak to me. I can feel them pulled me in. I can see them knocking off the unnecessary parts of the rock as I hunt for the story I know is there.

I know I’ve found my tool of choice on this particular project, and for the next week I will undoubtedly watch that slide show over and over, letting it reveal more of the story to me.

So, what tools do you use to get rid of the unnecessary bits that are hiding your story from you?

17 thoughts on “Hand Me That Chisel”