If you believe Wikipedia—and I generally do—the first Thanksgiving or harvest festival was held by the Spanish on September 8, 1565 in Saint Augustine, Florida.

It wasn’t until the 20th century that the November observance became customary, and the fourth Thursday wasn’t written in stone until Franklin Roosevelt made it a national holiday in hopes of giving the country an economic boost.

Maybe he was thinking of all the things he’d be able to get dirt cheap on Black Friday.

So do we blame him for the crowds?

But I’m not here to talk about Thanksgiving.  I only threw that in because my wife said I should, considering tomorrow is the big day.  I’m becoming increasingly convinced that she should be the one writing these posts—but that’s not something we’ll get into right now.

What I want to talk about is something you might be able to buy on Black Friday at a reduced price.  So if you loathe technology, now’s the time to his the door marked EXIT.

OKAY, OKAY, GET TO THE FRIGGIN’ POINT ALREADY

I have always been a gear slut. When I was younger and trying to figure out how to build my own recording studio, I was the first guy in line for the latest gear, sometimes spending more money than I should have.

I don’t know why on earth my dear wife allowed me to do that, but I suppose she must have loved me or something and wanted to see her insane husband happy, even if it meant dipping into the savings account.

I was the same way with computers.  I bought my first one back before hard drives even existed and have bought a couple new ones every couple years.  I think I’m on my fifth or sixth laptop as we speak, and thinking about getting a new one.

But for some reason, there’s one piece of hardware I didn’t jump on when it first came out.  While the technosphere and the world were all abuzz about the iPad, my response was meh. 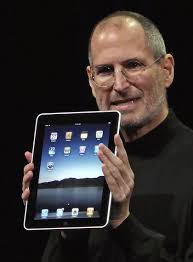 I have an iMac that I love.  I have an iPhone that I love.  And I have to admit that the iPad is a gorgeous piece of hardware.  But while I can put up with the limitations of the iPhone—because it’s a phone, for crissakes—it seemed to me that the iPad was nothing but a giant iPhone and didn’t attract me.

Had Apple put OSX on the iPad, I would have been first in line.  I think OSX is one of the finest operating systems going.  It’s elegant, runs apps beautifully, is virus-free, and is a great and robust experience for the user.

Unfortunately, Apple chose to use the iPhone operating system for their pad, and that makes it extremely limited in what it can do and how it can be used.  So, again, it didn’t attract me.

Now, if all you want is a device that allows you to surf the web, watch some movies, send a few emails, then the iPad is a great device, if you’re willing to except the fact that a large number of websites will not be viewable, because iPads don’t play Flash.  You also have to forego any kind of file system, and there are limited ports on the thing.

The iPad isn’t the first tablet to show up in the marketplace, of course.  But like the iPod, it’s the first of its kind to capture the imagination of the buying public.  Apple’s products may not be the best or most powerful devices you can buy, but the company does do two things very well:  1) make stuff look pretty; and 2) convince people they have to have it.

The iPad is also ideally suited to people who are new to computing.  Especially older people who are still trying to figure out how to adapt to the 21st Century in a rapidly changing world.

And thanks to competition of the marketplace, the iPad isn’t the only touchscreen tablet that will be available this Christmas season.  There are a number of competitors for the iPad, with more to come next year.  And the great thing about this new crop of computer tablets is that they run on Google’s Android operating system, which is open source.  And because it’s open source, it’s not under Apple’s draconian restrictions and anyone who can write code can create new and powerful versions of the operating system—and the applications that go along with it—which opens a whole new world of possibilities for these devices.

While I’m not all that attracted to the iPad, I have seen a couple of new tablets that I find very compelling.  So before you make the plunge into Apple territory, I consider looking at these alternatives.  You may find them more suitable to your needs.

First up is the Archos 70 Internet Tablet, which retails at a considerably lower price than the lowest priced iPad, coming in at $275:

Next we have the Samsung Galaxy Tab, which retails at around $600:

And this is only what’s available now.  The future will bring even more.  Of course, we could wait forever for the least expensive, most powerful device to come along, but at the rate technology changes, anything you buy today is obsolete tomorrow, so if you’re interested, you might as well take the plunge.

Despite the beauty of these products, I’m still left wondering if I would be able to find a use for them. I have a netbook, which I love, and it allows me to not only browse the web, watch movies, etc., but to write on it as well, a task I know is not that easy with these devices.

But then I see myself lying in bed with one of these things, watching a movie or reading a book and suddenly the possibilities seem endless…

And being the technonut I am, I’m bound to have one in my hands before the year is out.

In case you’re not watching #PokerFace …

@StephenKing My wife was born in Massachusetts, and she was saying the same thing. Just roll with it, though.