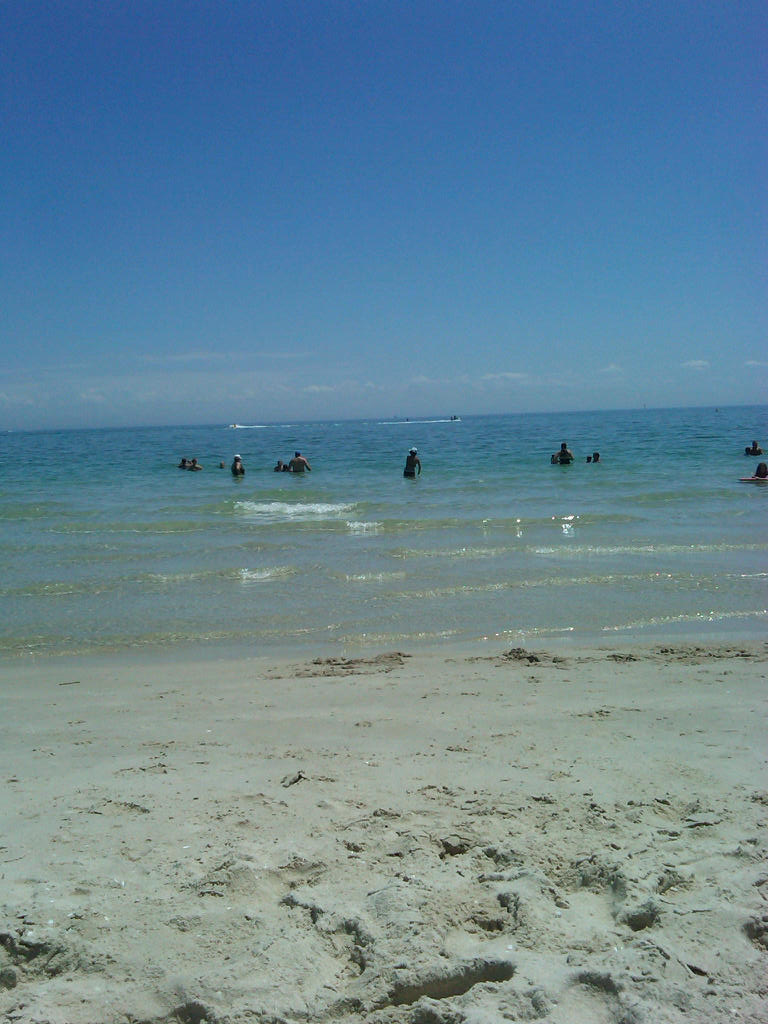 Okay, I’m still in holiday mode here (this is the view from my towel most mornings, although this picture does NOT do it justice!). In my last blog I talked about what I’ve been up to on my extended holiday break and today I’m going to continue with the holiday theme. We’re still down in the Mornington Peninsula (until Saturday), and then on Monday my daughter starts school (scary!). Anyway…holidays…

My mum is an avid golfer. She’s now retired and plays golf two to three times a week. She loves it. So, when she came down to the coast for a few days it was natural for her to persuade us all to go for nine holes of golf. I did try to suggest I could stay at home and write, but the look (you know the one that only a mother can give you) told me that it was NOT a good idea for me to bail on the golf. So off I went.

I’ve played golf a few times and keep thinking I’ll “get it”…but it hasn’t happened yet. After the first hole I was completely perplexed. What do people see in this game?? Why do they play it? Now the cynics reading this might think it had something to do with the fact that on the first hole (a par 4) it took me around 12 shots to get the stupid ball into the stupid hole. It may have even been 14 shots…let’s face it, by around six you lose count. My mum also tells me you have to count the shots when you completely miss the ball (air golf) but I think that’s a bit rough for a beginner.

The second hole wasn’t much better, but by the third I was down to about 8 or so shots (not counting the air-golf shots). Then one hole, I think it was the fifth hole, I took four shots for a par 3 and it did feel kind of good. But let’s face it, it was a complete fluke.

In the next hole there was a pond between me and the fairway. My daughter (who’s only 5) was in hysterics: “No, Mummy. It will go in the water. No!”  She was also quite worried about the ducks in the lake. But I thought I’d give it a go (maybe artificially buoyed by my four-shot hole). And what were the chances my ball would actually hit some poor innocent duck? Nil, surely. First ball went straight into the lake (of course), as did the second one. Thankfully, the ducks remained intact. Grace was most concerned about losing another ball (and I don’t think my mum wanted to give me another one either) so I walked around and dropped the ball on the fairway. And it still took me like a million shots to get it in the hole.

I think it was around this point that I said to my mum: “How many more holes have we got to go?” I guess it’s a variation on “Are we there yet?”

Interestingly, my daughter enjoys golf! My mum sometimes takes her to the driving range where they have 50 balls and then do some putting. On our 9 holes, Grace teed off about six times, often striking the ball further than me. Then we’d pick up her ball and give her a shot at the other end – putting. She seems pretty good for a 5yro, but then what do I know about golf?

As I walked around (for nearly three hours) I couldn’t help but think about what a complete waste of time golf was – and how I’d MUCH rather be at home writing. Time is very tight for me (the juggling act of motherhood, freelance corporate work and fiction writing) and I felt like I’d completely wasted three hours of my precious time. But I’m trying to be more ‘the glass if half full’ so I tried to think about the up-side.

The only other thing that worried me on the course was that this particular course has lots of houses on it. I kept saying to my mum, “I’d be worried a ball was going to come sailing through my window.” She assured me they were designed so it rarely/never happened. But they hadn’t seen me play golf! Or maybe the designers had taken into account people like me because I miraculously avoided both ducks and houses. Yay, me!

So, any golfers out there? What am I missing?  Or do you think this game is as absurd as I do? Or maybe there’s some other sport or hobby that you just don’t get.