There used to be a guy who ran our local municipal tip – that’s garbage dump in American – where we’d go if we wanted to dispose of items too large to fit into the standard-issue blue bin bag and put out for collection every week. Now, landfill is a universal problem, but the council are enlightened enough to have separate skips – OK, dumpsters – for garden waste, wood, metal, electrical appliances, as well as the usual recycling bins for glass, tin foil, paper, plastic, batteries and glass.

Nevertheless, there’s an awful lot of stuff that gets thrown away for no good reason other than its owners don’t want it any more. Working stuff. Stuff that, if they could be arsed, could be given away with a postcard in the local newsagents’ window, or put on a swap site like FreeCycle, or taken to a car boot sale at the weekend. One man’s rubbish, after all, is another’s treasure.

The guy who used to run the local tip understood this. He also understood that people often don’t have a lot of spare cash, and children eat up a goodly proportion of it. So, if someone came in with an outgrown child’s bicycle in good order, he wouldn’t just sling it into a skip, he’d put it to one side against the fence, and let that person choose a slightly larger bicycle from the stock already there to take away with them.

That’s my kind of recycling.

He made going to the tip an adventure. He would come bouncing out of his little hut and beckon you over to show you the latest treasure he’d unearthed. One time, he showed us a beautifully made wooden rack with loops cut out of it and marbles secured into the loops with wire. We couldn’t guess what it was for. An old-fashioned printer’s drying rack, he told us. The marbles slid up and gripped the paper gently enough for the ink to dry without smudging.

Of course, such free-thinking is not part of today’s bureaucratic make-up. The council soon knocked that on the head, no doubt citing some Health and Safety/insurance/liability issue as the reason. The guys who run the tip now are friendly enough, but the fun’s gone out of it.

They are not really people people.

Some people find fun in everything they do, no matter how mundane it might seem to the rest of us. They make a trip through the supermarket checkout a real giggle, or something as tiresome as a late-night short-hop plane ride an experience to remember. 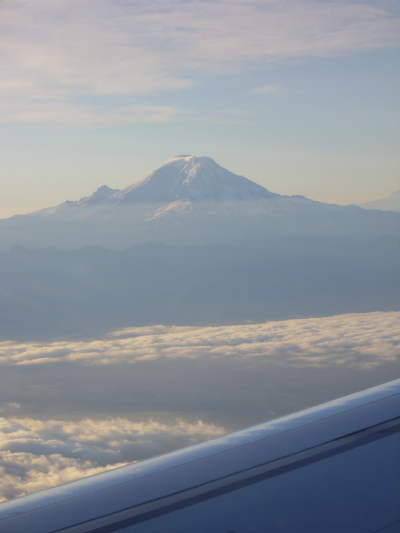 When we were touring in the States back in 2007, we took a LOT of Southwest flights. They were cheap, yes, but cheerful, too. I still recall getting on one flight in Phoenix. It was late, the plane was full, everyone was tired and grouchy, and when the standard safety briefing began, nobody was paying much attention to the cabin crew.

“We’re not anticipating any problems with our flight tonight,” said the woman on the address system, briskly, “otherwise I would have called in sick …”

Heads started to come up all the way along the rows of seats ahead of us.

“… but in the event of a loss of cabin pressure, an oxygen mask will drop down from the overhead compartment in front of you. Place the mask over your nose and mouth and tighten the straps around your head. Always adjust your own mask before helping others. If you’re travelling with children – we’re sorry. Pick the one you like best. If you don’t like either of them, pick the one with the most potential. If neither of them have potential, nyah.”

By the time she finished, she got a round of applause from everyone on the aircraft.

Of course, some people cultivate this, like the yeoman warders at the Tower of London. I confess that I don’t often watch video clips sent to me – mainly because our internet speed is horribly, horribly slow, but this particular guy is absolutely fantastic at his job. He imparts history with humour. If only I’d had a history teacher who’d made ingesting historical facts this much fun, I might even have continued going to school past my twelfth birthday.

What about you, ‘Rati? Any nice examples of people you’ve come across who turn an everyday task into an event? Equally, anybody who springs to mind who takes what should have been a fun experience and made it deathly dull?

This week’s Word of the Week is sophomore, which means a second-year student. I’m sure most of you have come across the word, although it’s used far more in the States and in the UK, but did you know it comes from sophos, meaning wise, and moros meaning foolish?

28 thoughts on “Going Out of Your Way, Not Getting Out of The Way”