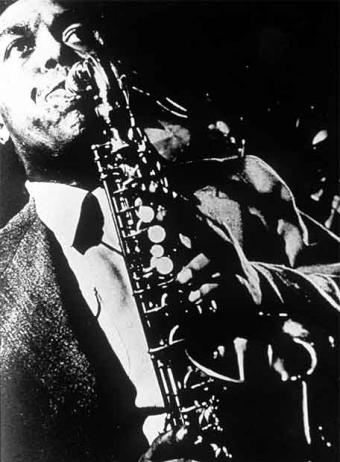 And here’s yet another example of how music has influenced the way I think about writing.  There’s a musical term, called “ghosting,” that describes a particular style of jazz improvisation. Let’s say there’s a musical phrase, or “lick,” that stretches over a number of bars.  When a musician “ghosts” that phrase, he whips through the notes, punctuating certain notes while passing over others on his way to the end of the phrase.  He might not even express the notes he passes over, he might merely suggest them by fingering the corresponding keys or allowing a very small amount of air into the instrument (if it is a saxophone or trumpet) in order to give the impression that the note was sounded.

It’s kind of hard to describe this in words, but if you take a listen to Charlie Parker playing Au Privave, you’ll get the gist.  The music starts off with the melody line, which is repeated once.  Then Charlie improvises, and you can hear how he “ghosts” the musical phrases.

Even though we don’t hear all the notes he’s playing, we sense their existence in the context of the musical phrase.  The notes are felt, even though they might not be audible.

I realized how this concept applied to writing when I was working as a development executive and a writer I knew was having trouble cutting back a long scene.  She was reluctant to let go of the back-story she had written into the scene, thinking the reader would be lost if things weren’t spelled out clearly.

“Cut it,” I said.  “All you need is a word here and there to suggest the extensive back-story you’ve written.  Your dialogue already contains subtle references to it.  The ghost of what you’ve written will remain.”

I was discovering the musical connection even as I was saying it.  Teaching works that way, you don’t know what you know until you try explaining it to others.  She liked the concept and went off to do her rewrites.  When she finished, her script was vastly improved.  It said more, with fewer words.  And she didn’t just cut the back-story, she “ghosted” it.

I started thinking about how ghosting plays a role in other aspects of our lives.  For instance, anyone who has had to deliver a hundred-word bio goes through the process of ghosting.  Take mine, for example, with its emphasis on my development work with Wolfgang Petersen.  That was over ten years ago already, yet it influenced my life in ways that the jobs I held thereafter did not.  What about the “day job” I’m currently in?  It doesn’t show up in the bio, except for the line, “Mr. Schwartz traveled the United States extensively…”  That was for the day job.  The traveling influenced the writer I would become, but the job itself…fuggedaboudit.  Ghost it.

And how many of us have written three or four completely different resumes, each in their own way accurate in their description of our work history, accomplishments and goals?  We present different images of ourselves for different purposes.  The full story of my life exists in the combination of all the resumes, but that would be too much information, and probably too confusing.  Ghost it.

And what about our memories?  Don’t we remember the big events, the things that are really significant in our lives, while letting the less significant ones disappear in a haze of gray?  You can’t tell someone the story of your life without ghosting.

I used to keep a recording device with me so I could capture every “great” idea that came into my head.  Then one day I was having lunch with another writer and he pulled his own tape-recorder from a hidden pocket, hit the record button, and said something to the effect of, “Note to self:  the protagonist should have a bouquet of flowers in his hands when the gunmen approach.”  Click, he slipped the recording device back into his pocket while turning to me with an innocent, “I’m sorry, you were saying?”

I ditched the tape recorder after that.  I realized that the good thoughts stick around.  Recording them or instantly jotting them down seemed redundant.  If the idea was still in my head after a week I knew it was something worth using.  If I forgot it ten minutes later then it probably wasn’t that important.  Kinda like the time I did shrooms and was absolutely fascinated with a glowing filament encased in a glass capsule, I spent hours marveling at it’s unique, sleek design and the God-inspired wisdom that caused it to come into existence.  The next morning I looked at the device again and said, “Oh yeah, a light bulb.”

But I digress.  We were talking about ghosting.

So, ghosting in writing could be described as an intentional suppression of information that allows for the seeping through of certain elements of that information in order to suggest the existence of a deeper, fuller background than what is written on the page.

Man, I want a spot on the next Webster’s Dictionary writing gig.

What about unintentional ghosting?  I was having a conversation with a friend recently and he told me about his father’s Alzheimer’s.  It’s in the early stages—the man still remembers his family members and most of the important moments in his life.  But if you ask him what he had for lunch he’ll just make shit up.  He’ll give a whole schpeil about the fictitious dining experience he didn’t have.  Brushing over the fact that he doesn’t remember a thing about it.  Unintentional ghosting?

All right, I’ve wasted too much of your precious time already.  Let’s all get back to work.

Does anyone out there in Murderati Land have any cool made-up words that almost make sense?  Or something you’ve taken from a different medium and applied it to writing?

Oh, yeah…one last plug on this…Crossing the Line, my short story prequel to Boulevard and Beat, is finally available as a free Kindle download from Amazon, as well as appearing as a free downloadable pdf from my website…