I never believed in ghosts. Until I was in a room with one.

When we were young marrieds and had our first son, we moved into a house that was in terrible shape. (Young, assuming we could fix it up. I think easy was tossed around a few times. Idiots got tossed around a few times as well, usually by older family members.) The house had been in one family since the early 1930s, and had been the first house built in a field in south Baton Rouge–a field which would later become the Garden District, an inviting place of live-oak trees and Craftsman and Colonial homes, where families crowded the sidewalks and neighbors talked to one another. Our house had not kept up with the majority of the neighborhood, which had made fixing it up a smart deal. The trick was, the homeowner was the daughter of the original owners, and she only wanted to sell to a family, not to someone who was just going to renovate and turn it over. Her mom, she’d explained, had loved kids and had wanted to have many more and was unable to. She, the daughter, had been unable to have any children at all, and while her mom was alive, the neighborhood had deteriorated. It was only after she’d died (in the house) that the area had started to revitalize. But because the house was so rundown, no one but developers had made offers and the daughter was losing hope.

So we bought. I was pregnant, and the daughter was thrilled. We had a house, which was such an improvement over the apartment where there was a basketball court in front of our door (literally, five feet in front) and if I never heard the thoing sound of a basketball hitting concrete or the kathunk shwish of it hitting the backboard and then the net, I would be the happiest camper on the freaking planet. I really wasn’t squicked out that the old woman had died in the house, which seemed to bother a lot of people. It hadn’t been a violent death. Everyone’s gotta die somewhere–might as well be in bed in a home she loved.

Odd things happened in that house. Missing items showed up in strange places. Often, the very thing we needed was suddenly on the table behind us, or on the counter. We hadn’t remembered putting it there, but in my pregnancy haze and my husband’s hectic schedule, we chalked it up to forgetfulness. You know, how you’re standing in front of the refrigerator, looking at your glasses on the top shelf, wondering how in the hell did they get there when you just had them on in the living room. Stuff like that. Common. What wasn’t quite as common was walking into a room and seeing someone walking out of the other door, only to follow and find no one was there in the hallway or the porch. Tricks of the light, though. Highly active imagination. Pregnancy hormones. Stir craziness.

When Luke was born, he had colic. Bad colic, constant, and the doctor claimed he’d ‘grow out of it’ and there was nothing anyone could do to help. Luke was miserable, and rarely slept. My peace of mine and sanity slowly disintegrated with my exhaustion. One night, I heard Luke crying from his room and then suddenly stop. I’d already been on my way toward him when I heard him giggle.

Giggling was so rare, particularly in the middle of the colic pain, that all of the hairs on the back of my neck pricked, and as I entered the room, I saw an old woman bent over his baby bed. He was looking up at her, laughing, though I couldn’t hear her saying a word, and since it was three something in the morning, I shouted–because who in the hell was this woman and how did she get in my house and why in the hell was she standing over my child? I ran toward the bed.

And she was gone.

That was it. I thought I was unraveling. My husband came running in to see what I was shouting over, and I think I maybe said something like mouse because you do not say ghost when you haven’t been married all that long. I shook from the adrenaline, my husband went back to sleep and Luke? Didn’t cry for the rest of the night.

A few days later, we were battling another colic session, and I carried Luke around with me, dancing with him, keeping him moving, which seemed to bring his only relief. I stood in the kitchen, when I heard something creaking in the living room. When I looked through the kitchen door, through the dining room archway, the rocking chair… was rocking. By itself. Luke and I were the only people in the house. And it wasn’t just rocking, as if it had been bumped and was jostled, nor was it rocking as if to the rhythm of my movements with Luke, because I was standing still as a post and it kept rocking.

That rocking chair had been left by the daughter. It had belonged to her mother, she said, who’d never had the chance to rock grandchildren, and wouldn’t I like to have it? To which I’d said, "Sure," since at the time it seemed perfectly innocent to take a gift chair when I didn’t have a rocking chair yet.

I was seriously second guessing that decision as the chair rocked. By itself. For more than thirty minutes.

Finally, I couldn’t take it anymore. I was so beyond freaked out, that I actually looked at the rocking chair and said, "Would you please stop? You’re scaring the hell out of me."

And the chair stopped. Right then, just stopped. Mid rock.

Made it much worse, actually, because I knew then that I was losing my mind. Which then meant they were going to take away my child, so I just needed to shut up and not tell a soul.

The old woman returned many times after that. I used the rocking chair (see School of Denial, Valedictorian), and I got used to her being in Luke’s bedroom at night. I also got used to him sleeping more and giggling often and I ignored the fact that someone was leaving the room just as I entered and I started to enjoy the fact that I would always find exactly what I needed when I needed it, usually close by (especially if I was holding Luke). It was my own private little insanity, and I’d just as soon not advertise it.

We sold the house and moved when our second son came along and we needed more space; I took the rocking chair with me. I never saw her again, though, and the chair never rocked on its own at the new place. I also had to find stuff on my own, which was kind of annoying, but I got back into the habit.

One day, we were visiting my sister-in-law, who’d moved into a home down the street from our original house, and I noticed a ‘for sale’ sign up in our former front yard. The new owners hadn’t been there all that long, though, and it surprised me that they were moving already. I asked my sister-in-law why they were moving, and she rolled her eyes and said, "They think the house is haunted."

"They claim that every time they fight, something breaks or someone throws something. The kids are little and the mom said that the dad gets really mad and when he starts yelling, something of his is usually broken,which just makes everything worse. And someone keeps messing with his keys. The wife claimed that one time, someone hurled the keys at his head, and it wasn’t her–she was supposedly on the other side of the room."

"Weird." I’m pretty sure I affected a completely innocent expression.

She went on to tell me other things that the wife had told various neighbors–and I nodded. I must have not seemed surprised enough, because she cut a cynical glance at me. "You don’t believe it’s really haunted, do you?"

I did a quick calculation of how old my kids were vs. the length of time it would take to declare me insane and said, "No, of course not."

Do we hang around after death? Can we do something that has a lasting, positive effect? I don’t know. Whether she was real or not, I know that I was a scared, exhausted mom and she helped. Sometimes when I felt particiularly impatient and worn down beyond coping, I would see the chair rocking and remember how much she’d wanted kids and grandkids and never had them, and that knowledge helped me dig in and find the patience I needed. I’m not entirely sure how we would have survived without her there.

I really wish I could see that chair rock on its own again.

So, ghost stories. Do you have one?

@mirandadevine Moms and dads who are threatening to hurt and kill school board members and teachers? Yeah, let's defend those terrorists.

@Bigtfw @lawindsor @CNN Everyone with a brain knows it isn't. 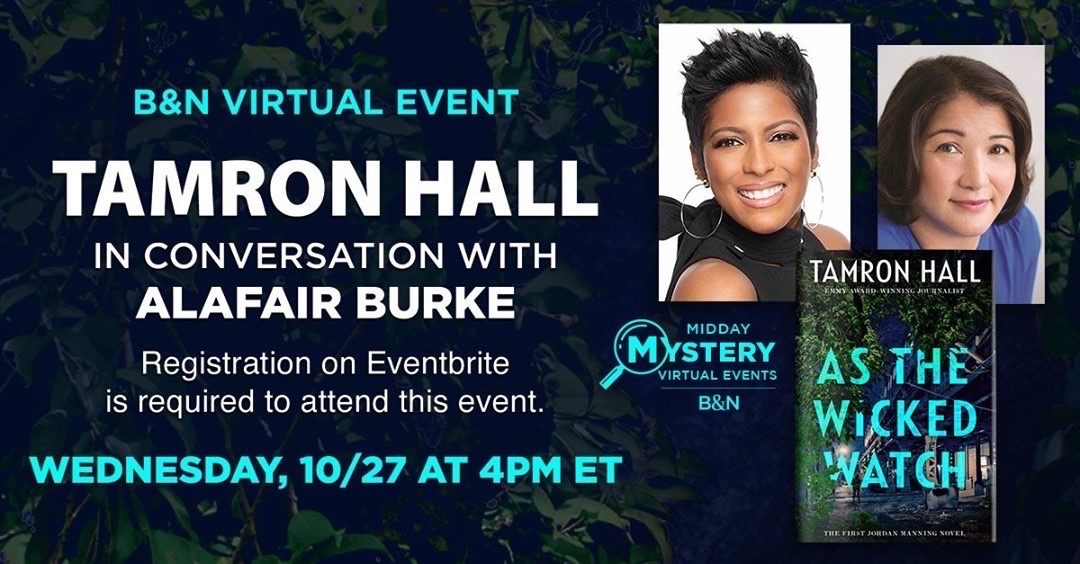 Posted @withregram • @barnesandnoble Barnes & Noble welcomes Emmy Award-Winning TV Host & Journalist @tamronhall for a live, virtual discussion of AS THE WICKED WATCH! on 10/27 @ 4 PM ET
⁠
Tamron Hall will be in conversation with @alafairburke
⁠
Get your tickets @ Eventbrite

@BrettBattles I just started #Mercy this morning and I can already tell I'm going to really love it.