I love the smell of cordite in the morning.

Okay, someone just had to scrape Lee Lofland off the ceiling. NO. You DO NOT smell cordite after gunfire. Not since WWII, anyway. I know that now because last weekend I attended Lee’s Writers Police Academy.

Lee Lofland, a former police detective and author of the Writers Digest bestselling book Police Procedure and Investigation (a must-have!) is not only a law enforcement professional who knows the job inside and out, but a writer who understands what other writers need to learn from law enforcement professionals in order to do OUR best work. And knowing that, he’s assembled a cast of characters any one of whom could easily be the star of their own series. Because it’s not about the facts, it’s about the people. And wow, the people.  (Photos by Lee Lofland). 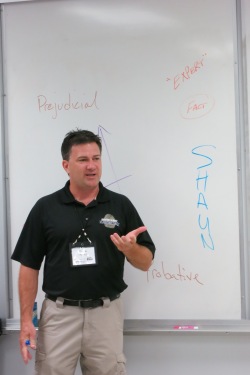 So I walked into my first forensics investigation workshop and the incarnation of my agent from Huntress Moon turned from the whiteboard.  I thought I was hallucinating, or having one of those dreams where… well, never mind that.  Dave Pauly, forensics professor at Methodist University in NC, has a resume that’s half Indiana Jones, half Jack Reacher. He team-taught with Robert Skiff – two of these for the price of one! (When I first arrived at the conference I wondered why 90 percent of the attendees were women. That got cleared up for me in the first hour. Testosterone was rolling down those corridors in waves…) 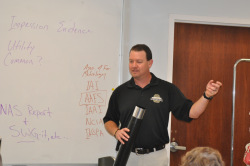 Skiff is more of a scientist, the training manager at Sirchie, a leading manufacturer of fingerprinting and forensics supplies. I may not know every single detail I need to know about blood spatter, print impressions, cold cases, and alternative light sources to finish my sequel – but let me tell you, after a day of forensics classes and demos with these two instructors, I am a lot closer than I was a week ago.

Then there was Corporal Dee Jackson, of the Guilford County Sheriff’s Department. A former Marine, one of the very first women to go into combat in the Gulf War, and if anyone ever thought a woman isn’t capable of the most intensive combat duty? Look no further than Dee, here playing a bad guy in a simulated shootout. 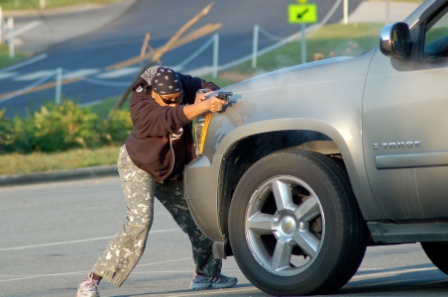 She is hilarious, profound, such a great comic and physical actor it floors me she hasn’t been scooped up by Hollywood, and committed to her mission in a way that literally halts your breath. The whole room – male, female, animal, vegetable, mineral – just stops when she walks in.

Katherine Ramsland. My first time meeting this powerhouse after reading a half-dozen of her forensics psychology books (and her brilliant biography of Anne Rice, Prism of the Night).  This woman has LIVED with death in a way most of us will never comprehend, and she is deep, funny, philosophical and mesmerizing.

And talk about powerhouse women…. I lived in L.A. during the Simpson trials and meeting Marcia Clark was like meeting a movie star. Her lecture on putting a case together for the prosecution was stellar, and she is a warm, witty, encompassingly charismatic human being. Thrilled to know her!

Andy Russell, one of the main organizers of the conference, was one of our Firearms Training Simulator (FATS) instructors. Somehow he managed not to break into hysterical laughter at my first attempts to heft a handgun, and in fact gave me some useful tips (“Try not to drop the magazine”) with a straight face. 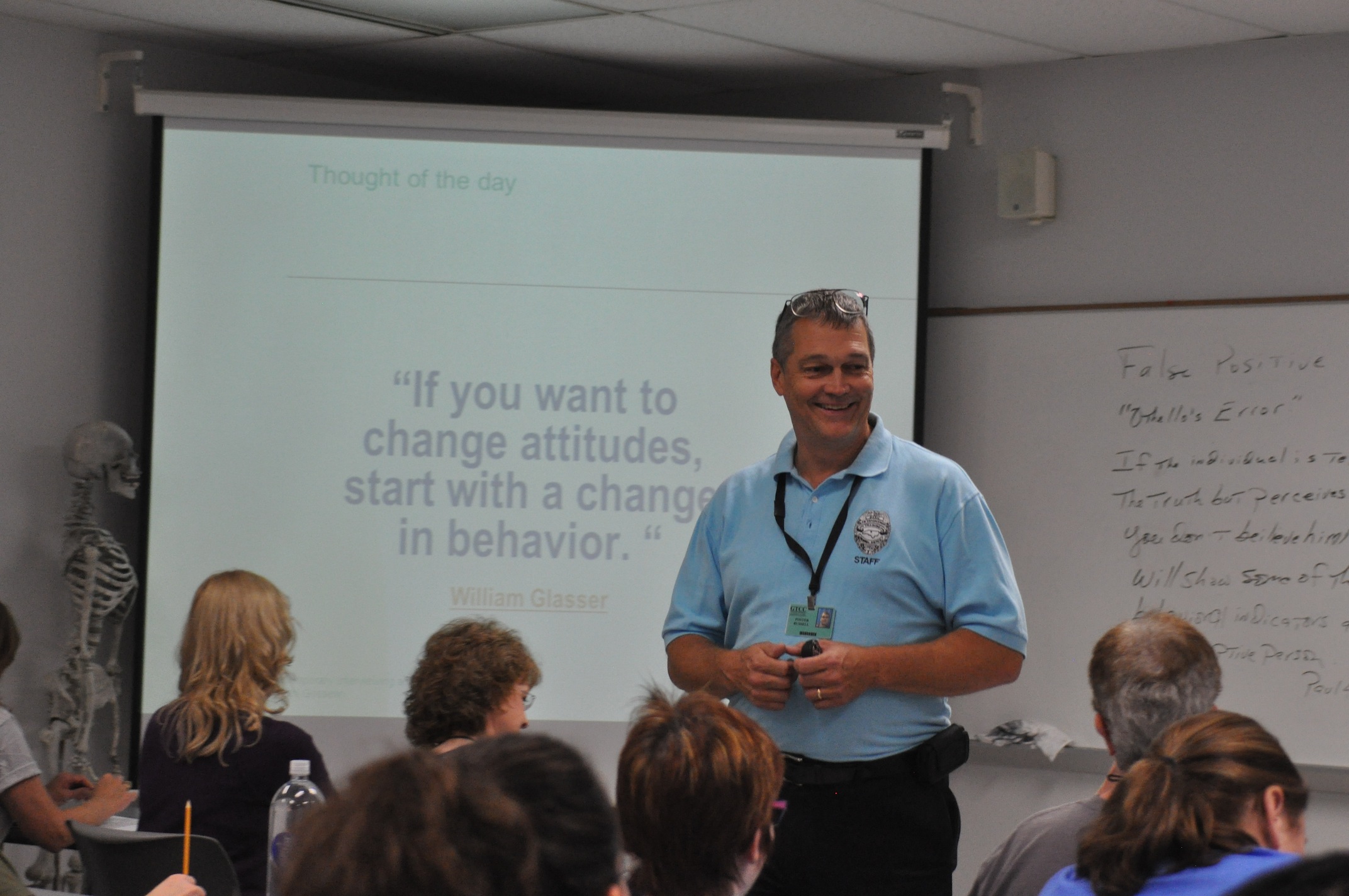 On a later panel he kicked off a series of stories that made me understand that people go into law enforcement mainly because every other call or traffic stop turns out to involve a naked perp.

Marco Conelli, a retired NYC undercover cop (now YA mystery author) is such a doll I was in total fear for him just listening to his buy and bust stories (narrated in a voice just like Woody Allen’s). You could see him slipping back into his junkie persona as he described the scenes. Fascinating.

This was my schedule:

Saturday: Anatomy of an Undercover Detective, FATS Training, Arrest and Handcuffing Techniques, Personal Survival Training for Women, Building a Case for the Prosecution.

The only frustration was not being able to take absolutely every workshop on offer.

Probably halfway into the second day, a lovely and radiant EMS technician, one that I can tell you for sure you would want there with you if you were, you know, dying, turned to me in the elevator between classes and said, “How can you possibly describe any of this?”

And I really wanted to answer her, and it’s a hard answer.  What I said was something like – “You have to put across enough of the science for a reader to kind of understand but it’s not ABOUT the science.  It’s about making the science real enough that readers will give themselves over to the EXPERIENCE you’re trying to create for them, which is about the searing passion of wanting to help people and the live wire adrenaline rush of fear and danger and commitment, and the intimacy of doing this job with people who are as skilled and committed as you are and who understand good and evil and pure life force the way you do and the way that no one who hasn’t done the job will ever know. It’s not about the science practically at all, it’s about the way you guys move, and the way ninhydrin crystals look in the light, and the things you say to each other and your twisted sense of humor and your absolute radiant love for all of it.”

I said some of that, not enough of it, because you can’t possibly say enough.

Some of these courses redefine the concept of adrenaline rush.  Lt. Randy Shepherd (aka Honeybuns, and yes, the moniker is accurate) put a squad of fifteen of us through our paces during Building Searches.  We’ve all seen this on a million TV shows, but now I have some grasp of the choreography and the constantly changing, split-second decision/dynamics of a bust like this – I have the flow of it in my BODY, and because it’s my own particular job as a writer to do so, I know I can put the experience of it onto the page for someone else to live through. I have been menaced and I have been shot at and I know the exact weight of the shield and the vest and the gun and I know the paralyzing fear of having to grasp ALL possible dangers behind ALL doors and windows and fireplace screens (even when there was no real danger there for me) and I know for damn sure that I am hopelessly inadequate and yet that I may still somehow survive… somehow… if I can manage not to kill anyone on MY OWN SIDE.

That is a hell of a lot to learn in a two-hour class.  And that’s just two hours of a non-stop marathon of police academy training.

There’s a saying in Hollywood that “Nobody knows anything.” Well, I’ll tell you what you don’t know.  You don’t know how you or anyone you know is going to react in life-threatening situations, even simulations of them, until you’re right there.

My five-foot tall (and that’s on a good hair day) roommate earned the title of “Killer” from the Firearms Training Simulator instructors when she put down every bad guy in the training DVD without even breathing hard.

While I seem incapable of shooting at anyone under twenty years old (although I also managed never to get killed or to kill a fellow officer). But – I was the only person in the Handcuffs Techniques workshop flexible enough to slip my body through my handcuffs back to front, putting me in a prime position to choke my arresting officer to death before she realized I was relatively loose (all right, so I’m more experienced with handcuffs than guns…)

And in Women’s Personal Survival Training, it was pretty clear how many women in the room had never actually let themselves think about what would happen to them if they LET a stranger force them into a car, or van, and why it is essential to make the choice to fight BEFORE anyone ever gets you into the car. Or at least understand the consequences of not fighting. Not many people in that class slept that night, I’d wager.

In fact, it’s five days later and I’m still not sleeping all the way through the night. The adrenaline is that powerful.

You cannot research those things by READING about them, or interviewing people who have lived it.

I’m not saying it’s at all the same to go through simulations, compared to the actual experience.  But compared to reading about it?  No contest.

Do we want to be better mystery and thriller writers?  Or what?

If you do, you owe it to yourself, your books and your readers to make the WPA a MUST DO event in your year.

I’ve written more about it here, and plan to do more posts as I’m processing everything I learned for myself, but here’s a better taste of the weekend on Lee’s blog.

My deepest thanks to Lee, all our superb instructors (ALL of whom volunteered their time) and to Sisters in Crime, who generously underwrote a large portion of the event to keep the tuition at rock-bottom.

And the question of the day is about research. Authors, how do you do the research that you need to do to write your books? Tell us some stories! And readers, how detailed do you like your police procedure? Who do you really think gets it right, in fiction?

21 thoughts on “Getting real – The Writers Police Academy”