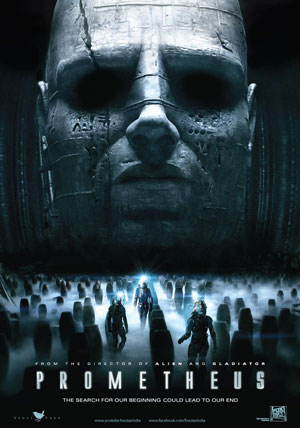 Actually, it’s way too late for a rewrite.  Prometheus is in the can and already raking in millions at theaters across the globe (though nowhere near as many millions as its producers had no doubt hoped, for some of the reasons I’m about to go into below).

I know, I know: We don’t normally do movie reviews here at Murderati.  And technically, I’m not about to post one now.  But this is Wildcard Tuesday, damnit — the day we ‘Ratis on the masthead get to do pretty much anything we damn well please — so what I am going to do is offer a broad-strokes, spoiler-free outline of all the missteps I think screenwriter Damon Lindelof — with the ostensible blessings of director Ridley Scott — made on his way to producing the final draft of the film’s script.

Understand that this is all coming from a huge fan of the first two films in 20th Century Fox’s Alien franchise (1979’s Alien and its 1986 sequel, Aliens).  In fact, I think James Cameron’s Aliens is one of the greatest action films ever made, and its precursor, Scott’s Alien, is a horror movie masterpiece that, when I first saw it, had me seriously considering fleeing the theater only halfway through its full running time, or to be precise about it, right after this now classic scene:

The Alien sequels that followed Cameron’s were all shoddy disappointments that just seemed to get worse and worse, and the ensuing Fox films that paired the eponymous Alien creature with the extraterrestrial bounty hunter first seen in the Arnold Schwarzenegger sci-fi thriller Predator (Alien vs. Predator [2004], Alien vs. Predator: Requiem [2007]) were a travesty made strictly to suck the last drop of box-office from both franchises.  So reasons for me to be encouraged earlier this year by the news that Prometheus was yet another film based on the Alien legend were few and far between.

Still, Prometheus was reportedly a prequel to Alien, and the director behind it was the man who’d gotten the franchise off to such a fantastic start: Ridley Scott.  So how bad could Prometheus possibly be?

Well, let me just put it this way: There’s no such thing as a rule book for screenwriters and directors to go by in making sci-fi blockbuster sequels/prequels like Prometheus, but if there were, the following are all the rules in it Damon Lindelof and Ridley Scott would have blatantly broken:

1. Don’t commit to doing a sequel if you don’t really want to do a sequel.

It’s been reported that Scott didn’t sign up to do Prometheus with the idea of making just another entry in the Alien film franchise, and if this is true, boy, does that reluctance ever show in the final product.  Everything in Prometheus that’s reminiscent of Scott’s Alien seems completely out of place, and that’s because Scott (and screenwriter Lindelof) clearly intended for Prometheus to be a much loftier, more thought-provoking film.  Which is unfortunate, because the only thought Alien provoked in most viewers was “That’s it — I’m closing my eyes until the lights come back up!”  Alien was a horror film, as I mentioned earlier, and there’s nothing organic to Prometheus‘s basic storyline to suggest that Scott had any interest this time around in scaring anybody.  My opinion? 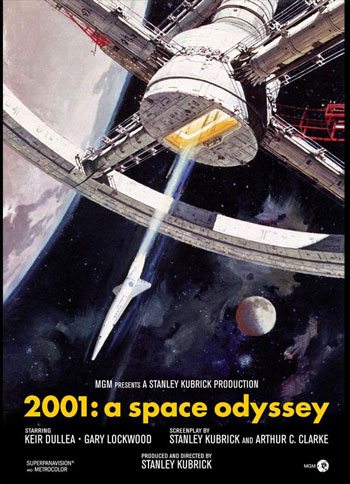 What Scott and Lindelof were hoping to make instead of a horror film, under the guise of an Alien “prequel,” was their own answer to Stanley Kubrick’s 2001: A Space Odyssey.  In other words, a deep, complex science fiction classic that would force viewers to ask serious questions about life, death, and mankind’s place in the universe.

Does that sound like an ideal foundation for an Alien prequel to you?

2. Pay attention to the science in science fiction.

My friend Doselle Young, who writes science fiction and horror with equal aplomb, is something of a science geek, and the list of factual absurdities he found in Prometheus is longer than the guest list to a Kardashian wedding.  Most of the things he mentioned when he and I compared notes on the film were just beyond the intellectual grasp of this former C+ high school science student, but many were basic enough that, once they were pointed out to me, even I understood how ridiculous they were.  For example, consider this question: Over a span of millions of years, would you expect a life form — any life form — to physically evolve in some noticeable way, or remain completely unchanged?

Also, timing is a critical element in any piece of fiction — making things happen in a way that is compatible with both logic and what is possible — and Prometheus fails this test over and over again.  Hint to Lindelof: The next time you take on a project of this kind, study up on the exact distance of a light year, and how long it would probably take a man-made spacecraft, no matter how technologically advanced, to cover one. 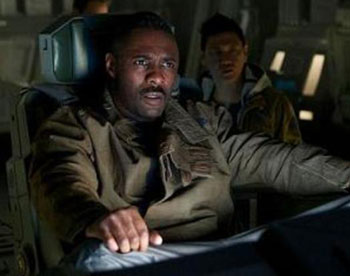 3. Give all your characters an actual reason to be in your script.

I won’t say much about this one except: Idris Elba, whom I greatly admire, is a member of the Prometheus cast, but I’ll be damned if I know why, other than so that his character — and I use the word “character” here loosely — can occasionally strike a dynamic pose at the ship’s helm.  Who was this person and what was the point of his existence?  The role he played in terms of the plot’s development was . . . what, exactly?

I don’t have a clue, and I doubt Lindelof does, either.

4. Give your characters a reason to do the things they do.

As opposed to just having them do things because, well, wouldn’t it be cool if they did?  Who cares why?

In the film’s most egregious example of random-shit-happening-for-no-good-reason, Lindelof has one character deliberately screw over another simply because he and Scott needed the resultant horrific death to occur, come hell or high water.  Nevermind that the offending character had no discernible motive for the act.

Why did Lindelof and Scott “need” this pointless death to be in the script so desperately, you ask?  Please see Rule #5 below.

5. Don’t populate your sequel with scenes you’ve literally cut-and-pasted from the original.

Remember that, according to my theory, Scott and Lindelof were secretly trying to make a film altogether different from the one Fox was paying them to make.  Doing Alien 5 was not in their plans.  Unfortunately, it was in their contracts, so the dynamic duo behind Prometheus took care to sprinkle their script with just enough blatantly obvious connections to Alien to keep the Fox execs dumb and happy. 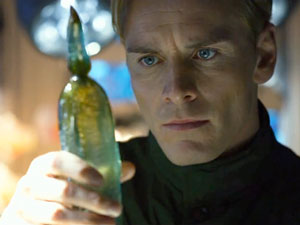 Check.  Overly-curious crew member gets a space-helmet facial from an Alien in a chamber full of creepy egg pods? 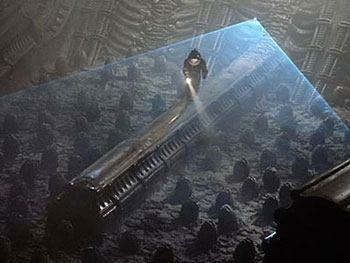 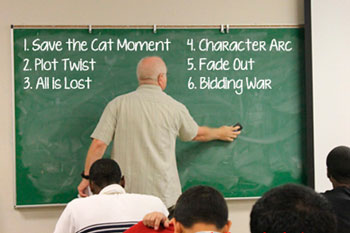 Check.  And so it goes.  Watching Prometheus, you can actually see where these scenes were artificially grafted on, square pegs jammed into round holes that bring the film to a screeching halt every time they crop up, so incongruent are they to what happens before and after.  This is screenwriting-by-checklist, and I’m sorry, but it blows.

6. Don’t give your character a brain in one scene only to have him behave like a blithering idiot in another.

When a character exhibits the common sense of most mature adults by fleeing from a dangerous situation, that’s good.

When that same character turns around fifteen minutes later and rushes headlong toward the identical dangerous situation — not because they’ve found the courage to do so, but simply because they’ve apparently lost their fucking minds — that’s bad.

In fiction, when a character behaves with such dumb disregard for his/her own safety that readers are forced to conclude they deserve to die, we call them TSTL: Too Stupid To Live.  With Prometheus, Lindelof and Scott have created a brand new, and far more maddening malady for fictional characters to suffer from: SOOTSTLS.

SOOTSTLS can strike any character at any time, no matter how rational and intelligent they may have appeared to be previously.  This is especially true when a screenwriter needs something to happen that shouldn’t really be in the script he’s writing at all (see Rule #5 above).

7. Avoid assigning the task of explaining something to your audience to a character who has no reason to understand things any better than your audience does.

When I said earlier that I had no idea what role Idris Elba’s character was supposed to play in Prometheus (Rule #3 above), that wasn’t exactly true.  Because near the end of the film, this character answers a Key Question the female lead — and every member of the audience — has been wondering about for almost two hours.  Or, I should say, he tries to answer it.  What he says doesn’t make a whole lot of sense.

It’s not the substance of his answer that’s the problem, however.  The problem is that it’s coming from a character who a) should be as ignorant of the subject in conversation as everyone else; and b) has demonstrated, prior to this moment, absolutely no curiosity whatsoever regarding the deep, philosophical mysteries our female protag has been struggling with since Fade In.  This is the guy who understands it all?  The one who’s done little more than exude soul brother cool, scene after scene, while everyone else around him has been ripping their hair out, trying to comprehend what the hell is going on here?

Well, I could go on and on.  But I won’t.  You get the idea.  Prometheus sucked, and it didn’t have to.  Given a script equal to its mouthwatering CGI, it could have been terrific.  But its script, instead, was a slapdash affair full of holes and jaw-dropping miscues.  For fans of Alien and Aliens like me, Prometheus represents a missed opportunity of monumental proportions.

That and, on a more personal level, fifteen dollars down the drain.