My middle daughter Erin is going through a bit of a rough time right now.  Nothing earth-shattering or health-related, thank God, just the usual fallout from a young adult making a few poor decisions regarding — what else? — money.  We’ve talked about her situation together and we both agree that the best way out of the mess she’s in is the one that is often the most difficult path of all to take: retreat.  Facing up to the fact that pushing forward, rather than falling back post-haste, would only make her problems worse, and acting accordingly.

Taking this tack will be embarassing for her, and will impact others.  It will involve admitting her mistake to friends and family, exposing herself as someone who isn’t quite as mature and put together as appearances might otherwise indicate.  In other words, it’s going to be painful as hell.  But it has to be done.

In the process of offering her my fatherly advice that she cut her losses now while she still can, before the brown stuff really hits the fan, I told her about a story I’d just recently heard on This American Life, the NPR radio program.  The story was titled “Self-Improvement Kick,” and it dealt with a young guy named Daryl Watson who, lost in life and looking for purpose, was inspired in 2009 to become the new Peace Pilgrim. 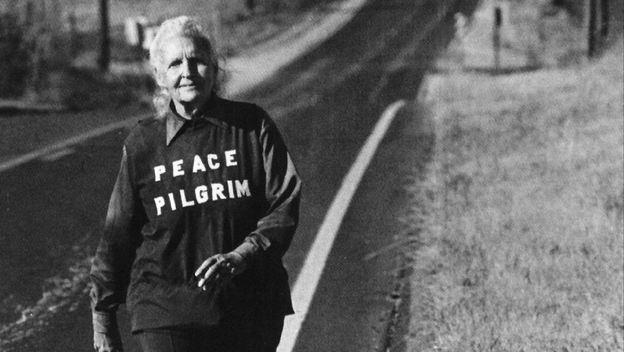 Who the hell was the first “Peace Pilgrim” you ask?  Well, it was a woman named Mildred Norman, who in 1953, at the age of 44, took it upon herself to walk across the length of America to promote the cause of peace.  From the start of her pilgrimage in Pasadena, California, to her death in Knox, Indiana, 28 years later, Norman logged over 40,000 miles on foot, carrying as her only possessions a pen, a comb, a toothbrush and a map.  She was entirely dependent on the kindness of others to keep going; everything she received in the way of food, drink and shelter was freely given.  She never asked for anything.

Anyway, 28 years after her death, young Daryl Watson heard Norman’s story and decided he’d just found his purpose in life.  He was going to become the world’s new Peace Pilgrim.  He chucked his career in children’s television, sold off all his belongings and cashed out his savings account.  Every bridge connecting him to the life he knew was dismantled; Watson not only tore up his driver’s license, the aspiring playwright erased every play he had written in the last eight years.

Before he set off from Cape Henlopen State Park in Delaware for San Francisco, California — a trip he estimated would take him around six months to complete — he created a blog site dedicated to his journey and emailed a very public goodbye to all his friends and loved ones, explaining as best he could what he was about to do and why.  He then started walking . . .

. . . and gave the whole thing up three days later.

Here’s how Watson describes what happened just after he’d crossed into the state of Maryland, a mere 40 miles into his trip:

Watson soon decided he had indeed made a mistake and pulled the plug on his grand experiment.  Which meant he had to go back home and start his life all over again, but only after telling all those people to whom he’d bid farewell that the Peace Pilgrim, circa 2009, had fallen just 23 1/2 weeks and 2,880 miles short of duplicating the amazing perambulatory feat of the original.

The impulse to soldier on, even at the risk of ruining his health or, worse, losing his life, must have been incredible.  How to admit to all those people that you’ve failed so miserably, so completely?  Wouldn’t perishing in the cold almost seem preferable to enduring such mortification?  And consider that what Watson was returning to was nothing less (greater?) than Square One, the giant crater of nothingness — no job, no home, no earthly possessions — he’d deliberately made of his existence.

Yet he did what had to be done.  He admitted defeat and reversed his field, saving himself, and all the good works he may very well do in the future, in the process.

I related this story to Erin because I think it beautifully illustrates the lesson I wanted to impart to her, which is that sometimes, the only way to go forward is to stand on the brakes and go back to where you started, no matter the cost to your ego.

I’ve been working on a short story over the last several weeks that I’m overdue turning in to my editor.  The reason the story’s late is that I stopped midway through to rewrite much of what I’d already written, having realized — or, more to the point, having lost the will to deny — that the story just flat out wasn’t working as it was.  I hated to do it.  I wanted the damn story over with.  But just as Daryl Watson was cosmically advised by a billboard to rethink what he was doing and turn back, I am occasionally the recipient of similar warning messages, and this one told me to bite the bullet, double-back, and fix what was broken in my short story.

It was the right thing to do.  The story works flawlessly now.

When deadlines loom, anything short of forward momentum feels like failure.  But there are times that moving forward, intead of backward, is precisely the wrong approach to take.

I think Erin understands this now, and I suspect the man who once sought to become Peace Pilgrim, ver. 2.0, does as well.

6 thoughts on “FULL SPEED BEHIND”