Monday morning. Just back from a photo shoot over the weekend with numerous images to sort and burn and get in the post on a magazine deadline. I got up with every good intention of getting that out of the way, having my usual blended smoothie for breakfast, doing a few miles on the stationary bike, then cracking on with the rewrites with the iPod on full shuffle in the background.

And then the power went out.

Fortunately, my desktop machine is connected to an Uninterruptable Power Supply, dating back to the time of Windows 95 when, if you suddenly pulled the plug, it tended to get a little … sulky, shall we say.

So, much squeaking and bleeping from the UPS, warning me I had enough time to do a controlled save and exit, but probably not enough to start transferring large images to a back-up drive so I could work on them on my laptop.

Seeing various men in hard hats and United Utilities fluoro jackets wandering about down the lane, I ambled out and asked roughly how long it would be before they had the problem sorted. Slightly Baffled Looks were exchanged.

“Erm, didn’t you get the card?” one asked nervously. “They were supposed to send them out last week. This is an organised shutdown for maintenance work. It’ll be off all morning.”

No, I didn’t get the card, obviously. And using the term ‘organised’ in this context seemed to be overstating the case somewhat, since none of my neighbours had received notification of this impending power-cut, either.

So, back to the strangely silent study and there my creative side really got to work on me.

No power for the blender, so no usual breakfast.

No power for the stationary bike, so no exercise routine.

No music. No Internet. No email. No walkabout telephones. No TV.

OK, so this wasn’t the end of the world. I have a laptop I could have used, but even though the batteries are pretty good on such machines these days, I find it enormously difficult to concentrate when that little battery-life meter is ticking away in the background. But, if desperate, I could have gone and sat in the car and used the cigarette-lighter charger.

As for the Internet, I’m not so addicted that I was prepared to hop into said car and drive to the nearest town where there’s a very nice arts-and-crafts gallery I occasionally frequent, which has self-service cappuccino, free wireless Internet, and half a chance of the kind of cellphone signal we can only dream about at home.

Instead, I resorted to making notes on the rewrites in good old-fashioned pencil, and when I’d gone about as far as I could without typing up the alterations, I sat down and read a book. All this in the knowledge that, if this ‘routine maintenance’ turned into a ‘oops, we’ll be back to fix it in the morning’ we’d be dining by candlelight that evening. (Fortunately, we have a gas hob, so we can still cook.)

And, having been hit by 130mph winds when we first moved into the new house a few years ago – an occasion which resulted in us losing about a third of the roof and having the power off for a week – we discovered that the levels of insulation we’d installed during the build were worth their salt. It was still warm inside after a week with no heat circulating, even in January.

But, I was suddenly aware that, at the flick of a switch, I’d left the technological age of computers and email and instant communication and information behind. Instead, I’d time-travelled back to using a graphite stick on a sheet of paper and the prospect of burning string inserted in wax for light.

It was a sobering thought.

This came at a very apt time, following JT’s recent post, How Technology Is Changing The Face of Literature, in which she particularly mentioned the mobile phone and how its widespread use has to be accounted for. As I mentioned in my own comment to JT’s piece – new technology can be accounted for very easily, because the more we come to rely on gadgets, the further removed we become from the business of day-to-day survival.

Like the cheetah, the fastest land animal. For short bursts, the cheetah can run at up to 60mph (96kph), but in evolving into this sleek speed machine, it has become too lightweight to defend its kills, often expending life-threatening amounts of energy to bring down prey, only to have other scavengers horn in and elbow it away from the table before it’s had a chance to eat.

Not that I’m likening the average human to a cheetah, but it seems that, as a species, we’re in danger of evolving ourselves right out of existence.

Of simply being too clever for our own good.

And that information, of course, came from a quick Google search on cheetahs. When I first started writing, research meant hours spent in the local reference library, not simply surfing the Web from the comfort of your own home. Increasing numbers of libraries have been taking out bookshelves and putting in computer terminals, so has some of that knowledge been lost? 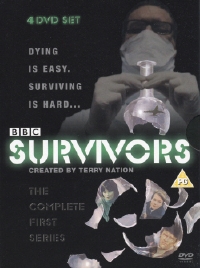 Back in 1975 there was a brilliant TV series on the BBC called ‘Survivors’. Devised by Terry Nation, the concept was that a genetically engineered virus is accidentally let loose, wiping out 95 percent of the world’s population, and leaving the survivors to face both nature and human nature, in their attempts to rebuild a way of life.

Last year, the BBC remade the series, with a new cast and story arcs interwoven with the original ideas.

And it struck me that people thrust into that same situation today would have a much harder time than their 1975 counterparts. Back in ‘75, there were no personal computers, no mobile phones, no satellite TV broadcasting 24-hour-a-day news from around the world, no Internet and no sat nav systems. Domestic microwave ovens were still a relatively new invention, and the majority of people did not rely on them as their sole means of preparing a mind-boggling array of pre-packaged convenience food. People still knew how to meet up at a prearranged rendezvous point without being in constant “Where are you?” cellphone communication. They knew how to read a map, mend their own clothes instead of throwing them away, and could prepare a meal from raw fresh ingredients.

In 2004, there was an article published in The Times, which explained the opinion held by the British security service, MI5, that western societies are ‘four meals away from anarchy’. If there was a terrorist attack, a hacker-instigated computer meltdown, or some other natural disaster that disrupted the electricity, food and water networks, it would be approximately 48 hours before things began to descend into chaos. The panic-buying and hoarding would start, and – when stocks ran out – violent defence of those limited assets would quickly come into play. As soon as people start to go hungry, in other words, civilisation goes out the window.

So, what if Monday’s power-cut had not been a brief interruption, but the start of a global catastrophe? Then what would I have done then?

What would YOU do?

You need transport, but cars need fuel. With no power, you need to hand-crank the fuel out of its underground tanks and hoard it, because the refineries have shut down and there won’t be fresh supplies being delivered any time soon. And no doubt a lot of other people will have the same idea …

And cars have become a disposable item. Could you mend yours if it went wrong? No mechanics to take it to, no computer diagnostics at the local dealership to pinpoint the problem. So, maybe you need to resort to more primitive means. Can you ride a horse? Do you know how to feed and care for one? And, even if you do, can you also act as your own veterinary surgeon and farrier?

What happens if you get sick? No Googling the best form of treatment, no paramedics or surgeons, no modern anaesthetic or drugs.

Could you make a fire, build a shelter, identify what’s safe to eat in the wild or what will kill you stone dead? Can you fend off predators – human and animal?

Processed food in the supermarkets – always supposing they haven’t been picked clean by looters by now – has a sell-by date. What happens when it’s all gone, or gone bad? Could you grow enough food to sustain you and your family? Could you catch, kill, and butcher an animal to eat?

Could you kill another human being to defend what’s yours?

OK, I’ll stop now. This is what happens when I let that writer’s ‘what if’ side of my brain loose to run with an idea.

A few last questions. If society as we know it ended tomorrow, what would you miss most?

What about modern life would you be rather glad to see the back of?

I’m on the road today, travelling down to the CrimeFest convention in Bristol, which looks like being an enormous amount of fun, but I’ll try to respond to comments as soon as we get to the convention hotel this evening.

And next weekend, of course, I’m off to Mayhem in the Midlands where I am delighted to be the International Guest of Honour, but that, as they say, is another story.

Meanwhile, this week’s Word of the Week is facinorous, which means atrociously wicked, from facinus, a crime.

29 thoughts on “Four Meals Away From Anarchy”