When I started to write this blog entry, I began a piece on what I consider to be the new newspaper. Interesting? Perhaps. But I found the voice in my head going “blah, blah, blah” after a while. So maybe I’ll save that for another time. That’ll be up to you (read to the end).

Can I be honest here? I’ll pretend I’m hearing a resounding SURE.

Thanks. Okay, here goes. Sometimes trying to write a blog post sucks. All of you who blog know what I mean. Am I even saying anything anyone cares about? Is this interesting? Am I making sense?

A few years ago, I used to post multiple times a week on my own blog. Some of you reading this do that now. Again with the honesty…there’s no way in hell I could do that today. I would go CRAZY. Give me a book to write any day. But two, three or, my God, four or more posts a week? Stripping me bare and dropping me in the middle of Time Square in January would be less painful! (More humiliating, perhaps, but it’s a trade off I might be willing to make.)

The problem is I only blog every other week now and I STILL run out of ideas! Okay, that’s not completely accurate. It’s more of a I-don’t-know-what-to-write-that-people-will-find-interesting kind of thing.

There are some weeks when my Thursday is getting closer and closer, and I am starting to sweat. “Pull your head out of your ass and think of something,” I tell myself. I always do, but sometimes the gap between that doing and there being a gaping blank hole on Murderati where my post should be is a razor thin line. (And just so you don’t think I’m a complete flake, there are times when I get a post written and up ready to go a week or even more ahead of time. This week was not one of those weeks.)

But those doubts about whether I’m writing posts that people are interested in remains. That’s fueled a lot by the fact that I’m pretty sure I’m Murderati’s least commented on poster. (This is not a pity plea, just stating potential facts here…if there is anything like a “potential fact.” I guess I should go back and do a scientific survey, but…yeah…I’m not going to do that.) (I should also note that about a year ago I sent our wonderful JT an email saying I was obviously not writing the kind of things people wanted to read, and was considering leaving the blog. Among other things, she pointed out that it would be helpful if I actually commented on the other Murderati folks posts, to remind our readers I was out here, and to engage more in the general conversation. OUCH! But damn if she wasn’t right. Though I did comment on occasion, it was rare. Duly chastened, I forged on. My commenting has still be somewhat sporadic, but I’m trying. But I know me, and on the perfect/not-so-perfect scale in this area the needle of my meter will always to tend to trend to the not-so-perfect side. Sincere apologies to all my fellow Murderati contributors…I’m not giving up, though.)

ANYWAY, back to the non-parenthesis’d portion of today’s entertainment. And that would be the fact that I’m looking for your help. What I really want to do is write about things you’d be interested in reading. So far, I don’t know if I’ve hit that mark. Perhaps, but perhaps not. (Maybe what I need to do is to go off on a rant like Rob did a few weeks ago. That was HILARIOUS. But, see, I’m generally not a ranter. I’m the appeaser, the peace-maker, the Vaseline on dry skin…wait, strike that last one.) Oops…more parenthesises, sorry about that.

So back to what I was trying to say… Today, I want you to be “where I get my ideas from.” (At least, blog-wise. Story ideas, I’m good.) Parenthesises, Brett! Parenthesises! I can’t promise to address every topic suggested, but those I either have knowledge of or an option about, I will.

So tell me Murderati faithful, what do you want to read about here?

In anticipation of your suggestions, I’ve lined up a little something interesting.

It’s an idea, that, whether you think it’s good or not, you have to admit is pretty ingenious.

Via Boingboing.net I bring you part of a patent request for the latest idea in coffin technology: 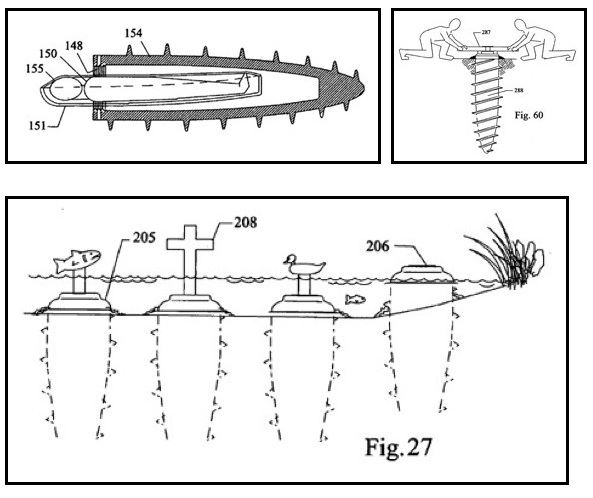 63 thoughts on “FLOUNDERING IN THE DIGITAL MORASS”