Gelatophobia. Okay, I know it doesn’t mean Fear of Ice Cream, but gelatophobia is what I’ve got.  The fear of being laughed at.

(For the moment, I’m going to ignore the topic of words that don’t look like what they really mean. “Gelatophobia,” for one. “Rosacea,” for another. It should be a beautiful Latina’s name instead of a skin desease. But that’s a blog theme for another day.)

Unlike our Rob, whose video rendition of “Mandy” in last week’s blog post proves he does not suffer from this malady, gelatophobia has shaped me in ways that I could never have imagined.

And I blame it all on the circus.

We weren’t big on family outings when I was growing up. We had one driving vacation as a family and that was to Disneyland and San Diego. I got a nail in my foot at Disneyland and got picked up by the cops as a lost child in San Diego.

I remember only one family dinner in a restaurant and that was a Bob’s Big Boy. My mother learned her lesson after that. I’ll bet the waitress still has nightmares.

And then there was the circus. All five of us kids were lined up like jaybirds on the sixth row of bleachers, close enough to smell the elephants, far enough away that everything still looked like magic. I was enthralled.

Feeling fully justified in taking my place in the center ring, I proudly joined him in the arena. He fussed and primped and tsk-tsked, all the while making sure I was posed correctly. Then he stood back and clicked the shutter release.

Somehow, with his fertile imagination and hand gestures, he got us to believe that that bulky old Kodak had morphed into a new fangled Polaroid and it spit out the picture … 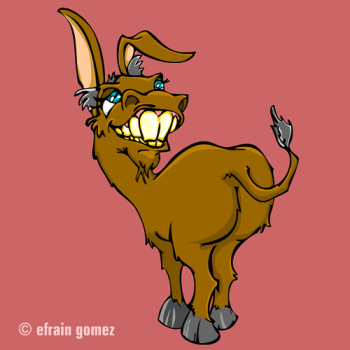 I have hated clowns ever since, but have lived in greater terror of the sound I heard that day – the full-throated, cackling derision of people laughing because I was the butt of their joke.

I’ve rarely been on the opposite side of that feeling. I don’t laugh at pratfalls or choose to see pie-in-the-face comedies. I don’t make fun of people’s looks or mistakes (unless the mistakes are grammatical or the attitudes suggest that uniquely evil combination of arrogance and ignorance).

And I don’t go to the circus anymore.

But I realized that my gelatophobia had colored other areas of my life as well. Take sports, for example.

I tried to ski once and wound up goring a would-be rescuer with my pole as he came to save me on the bunnyslope. I gave up running after coming in second in a relay race. You’ll never see me on a karaoke stage.

Stupid, I know. But there you are.

On the other hand, I was awarded with immediate praise when I first started painting with oils, I took naturally to the ballet-like stretches of Pilates, and flying a plane seemed like second nature to me. Those continued to be hobbies and habits for a long time.

Which brings me to writing, of course.

I wrote my first book in five months after accepting a dare from a friend. I credit my writer’s group for that initial rush of praise; had they been less fulsome, I would have abandoned it in a nanosecond. The early success of securing an agent and selling the book when it was finally done sealed the deal.

I admire them – those with hearts much stronger and surer than my own – those people who try and fail and get up to try again. Even if they’re on the receiving end of the literary equivalent of that crowd’s laughter.

Think it’s too late for me? Is sixty too old to start competitive diving? 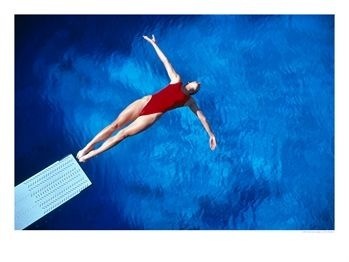