I am so fucking fat.

This really hit home when I was in Hawaii last week. You see, going to Honolulu is kind of a free-for-all in the food department.  Even though we rent a house, we usually dine out every meal (although breakfast is often just a cup of coffee).

And when I say dine out—you gotta understand.  Hawaiians (meaning people who live in Hawaii, not just the native Hawaiians) REALLY know how to eat.

Here’s the typical plate lunch, which is a staple over there: 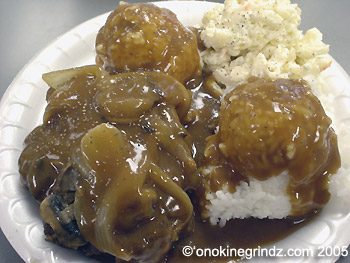 Three hamburger steak patties, two scoops of white rice, A scoop of macaroni salad and one honking shitload of gravy.

Substitute chicken, fish, teri beef, tonkatsu for the hamburger on subsequent days of the week.

Anyway, after eating like that for a week and a half, you tend to walk around feeling like you’ve been vacationing on a cruise liner and hitting the buffet every ten minutes.

Don’t even ask me about undressing in front of a mirror.  Burn that image into your brain folks—it’s certainly burnt into mine.

Around about day six, I could barely walk.  I was dragging my fat around like a pregnant otter.  I took a look at myself and said, “Rob, this is ridiculous.  You’re turning into a blimp.  Seriously, you’ve gotta do something about it.”

I think I can safely say that my wife agrees.  And I don’t blame her.

So now I AM doing something about it.  Ever since we got back, I’ve begun watching my calories again—which is how I lost 50 lbs back in 2005.  (Can anyone say YoYo?)

I find that if there’s actually low cal food around—meaning fruit and veggies and other goodies—I don’t have a problem eating right.  But if there’s nothing in the house… ugh.  I’m tempted to grab a tortilla and a pound of cheese and make a half dozen quesadillas.

Fortunately, I’ve been able to resist such temptation so far.  And every day, I enter my consumed calorie count into my little iPhone Lose It! app (thank you, Brett) and watch my progress.  In fact, in just a few days of not eating heavy island-style food, I’m already feeling lighter on my feet.

The great thing about Lose It! is that you can enter you current weight, your target weight and a few other factors, along with the date you’d like to achieve that target, and it’ll tell you how many calories you can consume a day.

As of this writing, after breakfast lunch and dinner, I’ve only consumed 1,416 calories.

But I think I’ll go for a walk, first.  That’ll subtract a couple hundred calories from my count.

So the question today is, do you ever diet?  And what diet plan do you use or recommend?