Last week, we went out and finally managed to buy a new car. Well, not a new new car, but new to us. And that has means braving the world of the Used Car Salesman. 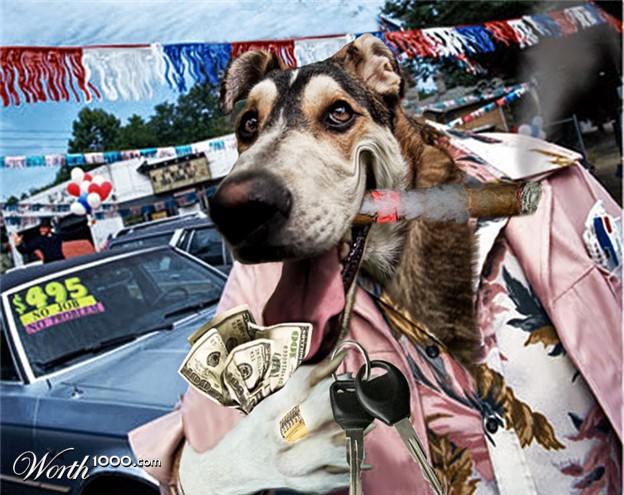 This has been a frustrating experience, because, what with the economy being in the state it’s in, we decided to tighten our budget for a new motor, and that has meant we’re not exactly dealing with the cream of the crop. So, off we went to the Autotrader website and entered our particular requirements. From the thousands of cars for sale across the whole of the UK, this narrowed things down to a final choice of just six. Which means it’s very much a sellers’ market.

You might have thought, in that case, that there was no need for embroidery in sales’ technique. You might have thought that a simple, “It is what it is, but there’s not many of them about, so take it or leave it,” kind of attitude would work best. Oh no. That would be too easy.

Instead, they have to lie to you.

Now, I expect to be lied to. Not just by used car salesman, but generally. It’s a fact of life. Sad but true.

Let’s be honest about this, if you’ll forgive the irony. Little lies make the world go round. Nobody likes being told they look older, unless it’s a sixteen-year-old girl, dressing to try and buy alcohol on a Friday night. Nobody likes to be greeted with the words, “Gosh, you’ve put so much weight on, I hardly recognised you!” at their school reunion, unless they spent their entire academic career suffering from anorexia.

So, everybody lies. Sometimes with the best of intentions. Sometimes by omission. But everybody does it. From little white ones to huge whoppers. With clear intent to deceive or entirely by accident. In adoration or with malice aforethought.

But what I object to are people who lie badly. The ones who say, for instance, “This car’s immaculate. You won’t be disappointed,” and trick you into a 260-mile round trip to view something that’s been owned by somebody who patently believes parking is a full-contact sport, and who appears to have thrown up all over the passenger seat, which is as good an argument as I can think of against perforated leather trim.

Just about every panel on this particular vehicle was a different colour, and some of them no longer fitted quite the way they should. And when I asked the salesman just how bad an accident it had been in, his Teflon-shouldered answer was that the car had passed its HPI check. “Yes,” I said, “but that just proves it wasn’t a write-off, not that it hasn’t had a major thump and been repaired.” Quick as a flash he came back with, “But everything this age has had some paint.” Yeah, and some of it even matches the original …

The business of lying is fascinating. Some people can do it without a flicker, a constant stream of invention without repetition or hesitation. The art of the great lie, of course, is one where the person being lied to never realises that fact. The art of the great liar, on the other hand, is someone who can spout blatant untruths with such conviction that the person being lied to knows it full well, but begins to doubt their own understanding of the truth.

As writers of crime fiction, we have to understand the art of the lie. Some characters, inevitably, will lie during the course of the story. I remember being pulled up by one editor for making a character lie too well. She wanted some better indication that this person was not telling my protagonist the truth. And that’s a tricky one. I’ve come across some brilliant liars, and some lousy ones. Making someone an OK liar is much more difficult.

At ThrillerFest in NYC in 2007, Christine Kling moderated the Liars’ Panel, where she got her panellists to tell the audience something about themselves that was not well known. Some surprising facts emerged, including that one author could not read or write until they were seven, and another had once been arrested on suspicion of murder. And then Chris told us that most of these authors were lying and we had to separate fact from fiction. It was surprisingly difficult, so does that mean the average trusting human being is very bad at detecting barefaced lies, or that that fiction writers are simply good liars? Do we, by definition, spend our lives constructing intricate webs of what are, essentially, lies?

How aware are you of the lies contained within the story when you write? When you read? And what’s the best – or the worst – lie you’ve either ever told, or had told to you? 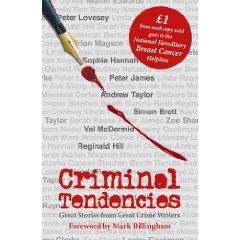 On a slightly different note, I am very pleased to have been included in to a new short story anthology that’s out next week from Crème de la Crime and edited by the delightful Lynne Patrick. CRIMINAL TENDENCIES has tales from an array of British crime writers, all of which have been contributed for the benefit of The National Hereditary Breast Cancer Helpline, The Genesis Appeal (the only UK charity entirely dedicated to the prevention of breast cancer) and The National Breast Cancer Coalition in the States. My story, ‘Off Duty’ is a Charlie Fox tale that slots into the time frame between the last two series books and tells what happens should you be foolish enough to try and get between a girl and her motorcyle.

This week’s Word of the Week is zyxt, which is a Kentish dialect word meaning to see. And not a bad score in Scrabble, either …

Apologies in advance, also. By the time this posts I shall be on a ferry to Northern Ireland but will try to respond to comments as soon as I can.

20 thoughts on “Everybody Lies”