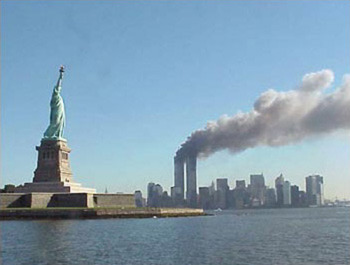 Today is the eleventh anniversary of the terrorist attacks on the Twin Towers and the Pentagon. I thought it would be appropriate to interview a first responder—in this case, someone who has worked in fire and emergency services for thirty-two years, both here in the U.S. and in New Zealand.

His name is Mark Chubb and he has served as a fire chief, emergency manager, engineer, inspector, and investigator in addition to his time on the frontlines as a firefighter. Mark is a member of the affiliated research faculty of the Regenhard Center for Emergency Response Studies at the John Jay College of Criminal Justice at the City University of New York, and is a weekly contributor to HLSwatch.com.

He also assisted me in the writing of the fire-related sections of Done for a Dime, and by some sad, strange quirk of fate also happens to be my nephew.

I wanted to hear Mark’s opinions both about the attacks and where we find ourselves in public safety services eleven years later. Here’s what he had to say.

You were overseas in New Zealand on 9/11. How did New Zealanders react to the news? Was there a common sense of shock and vulnerability?

Because of the time difference, most New Zealanders learned about the attacks when they woke up on September 12th. By then, the Twin Towers had already collapsed and television news was presenting images of dazed and distressed New Yorkers fleeing Manhattan on foot, which I can only describe as post-apocalyptic.

New Zealanders like others around the world found these images not only shocking but deeply disturbing.

As you might imagine, my wife and I felt particularly vulnerable as we watched these images. She was born in the city and still had family there. Some were near Ground Zero when the attacks occurred. I had many friends in the area, some of whom responded to the World Trade Center and others who were emailing and texting their observations.

When we left the house we were taken by surprise as friends, neighbors, and total strangers embraced us. My wife stopped for breakfast while taking the kids to school. A lady near her, hearing her American accent approached and asked, “Are you alright?” She had been holding it together pretty well until then, and simply broke down in tears.

Before leaving home, I erected an American flag at our front gate. By the time I got home, people had left flowers, candles, and notes beneath it, transforming the site into an ad hoc neighborhood shrine that grew day by day.

You knew some of the firefighters who died in the towers. Has that personal element had an effect on how you view the job now that you’ve returned to the US and are once again working in public safety here? How has it affected others you know?

Just before the attacks, I had been selected for promotion to a uniformed command position with the fire service in New Zealand. The attacks made me more aware than usual of the responsibility I was assuming not only for the welfare of my community but the safety of those I supervised.

As you said, I knew two of the 343 firefighters killed in the World Trade Center collapse. One was Battalion Chief Ray Downey who oversaw the fire department’s special operations command. The other was Firefighter Andrew Fredericks who was assigned to one of the special operations squads deployed early in the incident. Both of these men were not only highly skilled and passionate about what they did, but also more willing than most to share their experiences with others.

Andy was particularly articulate and wrote for a trade magazine for which I was also a contributor. Ray Downey was probably the quintessential New York City firefighter. He had worked in all the toughest assignments, and not only enjoyed the work but shunned the rewards. His promotions, especially his last one, were practically forced upon him.

Even today, I think about the sacrifices made by Andy and Ray and so many others. To some extent, I take consolation in the thought that they died doing something they were passionate about. They truly put the welfare of others ahead of their own safety.

On the other hand, I wonder why others in responsible positions did not take the firefighters’ safety more seriously and withdraw everyone before the second tower collapsed. I don’t think anyone realistically expected the first tower’s collapse, but after it occurred the second one coming down was all but inevitable.

It’s hard to know what the incident commanders knew. They too paid the ultimate price that day. But in the aftermath we know everyone who could be saved had already evacuated by the time the towers fell. The civilian loss of life on floors below the levels of aircraft impact were minimal. Those above the impact never stood a chance of getting out alive.

I think this incident still haunts anyone close to it or to the people who were there. The lesson I took from the attacks and the fire service response to them was the importance of keeping my head and heart connected when I’m making high-stakes, time-critical decisions that affect others’ lives.

What were some of the differences you saw in firefighting and public safety in general once you were back here in the states — was it a sea change or pretty much the same as before only more so?

I think the fire and emergency services have become self-absorbed and even opportunistic since 9/11. Some of these changes were already in process before I left the U.S. in 1999, but I think 9/11 accelerated the trend quite a bit.

After Aum Shinrikyo’s sarin gas attacks in the Tokyo subway and Timothy McVeigh’s attack on the Alfred P. Murrah Federal Building in Oklahoma City, firefighters were pleading their case before Congress for more federal financial assistance.

The argument went something like, “Hey, the cops get $11 billion per year in federal assistance. Don’t count on us to go into a subway filled with nerve agent if you don’t give us the money to equip and protect ourselves.”

The professionalization and militarization of public safety services has left those who provide these services more and more disconnected from the communities they serve. These days many cops and firefighters live well outside the communities where they work. As a result, public safety is now a service procured from others instead of something the community organizes to provide for itself.

You’ve been among a group of insiders in the public administration domain who’ve tried to sound the alarm that salary and benefit packages for public safety employees have to be sustainable to be realistic. This obviously isn’t popular, especially in a post-9/11 world. With three California cities filing for bankruptcy largely due to the burden of their public safety contracts — one of them my hometown — this is hardly an abstract matter. How do you see this scenario playing out, and how do you see fire and police services transitioning in the era of austerity many see coming?

I have been pretty outspoken about the salaries and benefits paid to public safety employees, and I do consider the current situation in many communities both unrealistic and unsustainable.

Before I address the problems I see, I need to make it clear that I am a firm believer that government jobs should pay not just a market wage but also a living wage.

The question about what constitutes a living wage is the subject of some controversy, but most citizens would agree that a living wage is one that pays enough for someone to live and raise a family in the community where they work.

Market-based wages are another question entirely, though, especially when it comes to public safety employees. Unlike many other government jobs, police and fire service are monopoly enterprises. It’s hard to find truly comparable jobs in the private sector to draw comparisons with.

When I started my career in the early 1980s, most cities were coming out of a period of very hard times. The response from many cities was to make public safety services more innovative and productive. Paramedic programs started in this era. Firefighters acquired new skills in rescue and hazardous materials response.

Starting about the same time, the incidence of fires dropped dramatically. Most of the decline seems to have occurred not because of but rather in spite of fire service efforts (or lack of effort for that matter).

As a consequence, a fire department’s main job these days has little to do with fires. In most cases, fires account for 2-5% of all emergency calls. Medical emergencies account for 70-85%. The rest of the calls are minor accidents, investigations, and false alarms.

Even with the sharp increase in medical responses, most fire departments have seen overall activity levels drop, at least on a per capita basis.

Meanwhile, it has become clear, at least to those who have studied the matter closely, that investments in staffing to reduce response times make very little difference. Building and staffing a fire station with career firefighters for something like $1.6-2.0 million per year rarely results in equivalent savings to the community in terms of life and property, productivity, insurance premiums and so on.

Do you see a possible silver lining in the cutting back of fire and police services, in the demand for greater citizen engagement with their own safety?

Yes, I do. Bankruptcy is unappealing to say the least. But it forces the kind of reckoning I think is inevitable.

For starters, it opens the eyes of the community and its public employees to their shared plight. The lack of common cause is a big part of the problem today, and bankruptcy puts everyone in the same boat.

Clearly, the expectations of citizens in bankrupt cities have changed. They take a more active interest in defining what needs to be done and deciding how and how well it should be done.

Disasters affect individuals as members of a community. None of us has the capacity to confront the challenges of recovery alone. If we didn’t need help, it wouldn’t be a disaster.

Creating conditions that give us confidence in the community, not just in the public servants we pay to protect us, makes it more rather than less likely that we will come through together when the chips are down.

Anyone who wishes to comment, in any way they wish, please feel free.

Jukebox Hero of the Week: Igor Stravinsky. His use of a major seventh chord in this beautiful arrangement of the Star-Spangled Banner earned the wrath of the Boston Police in 1944, who warned him he could incur a $100 fine for any “rearrangement of the national anthem in whole or in part.” The incident soon established itself as a myth, in which Stravinsky was supposedly arrested for playing the music. (The mug shot you see on the YouTube video is a hoax.)