It was a tough decision to go back to our current workspace/process theme today, after the death of the extraordinary David Thompson of Murder By The Book in Houston TX, and Busted Flush Press. This has been posted on the MBTB website:

David Thompson: A Celebration of Life

Please join McKenna Jordan and the Murder by the Book family for a celebration of the life of David Thompson, who passed away suddenly and unexpectedly on Monday, September 13, 2010. David loved a good party, and we will honor him by celebrating the life of an extraordinary young man who touched the lives of many in his 21 years at the bookstore.

There will be margaritas and Mexican hors d’œuvres– great favorites of David’s – along with other drinks. No RSVPs are necessary.

Many have asked about tributes to David’s memory. Alafair Burke has set up a fund for those who would like to make a donation in David’s name. The charity will be determined later. For those wishing to contribute, here are the details:

Or you can make a donation by Paypal:

I hope as many as possible will manage to get to the memorial party, and will contribute to the fund.

For me, David was my publisher as well as friend, and an incredibly enthusiastic advocate for crime fiction of all kinds. As a publisher he was wonderful, and I’m not just saying that out of sentimentality. He cared passionately about getting the books out there, publicising them, helping out. When we came out to Houston in June, shortly after the publication of KILLER INSTINCT, he met us at the airport with bottles of chilled water after our flight, fed us, looked after us.

I’ll treasure the memory of attending David and McKenna’s wedding amid the ruins of Dryburgh Abbey in Scotland only two short years ago. Andy and I went expecting to be surrounded by a huge group of strangers. Instead, we were welcomed into a tiny wedding party. The reception afterwards was small enough to sit around a single table. After expecting to slip away unnoticed once the inevitable dancing was in full swing, instead we all sat and talked late into the night.

They reckon you judge people by the shape of the hole they leave in the world.

All I can say is, David left a huge hole.

Needless to say, after all this, I haven’t been getting much writing done this week. But we have a couple of long car journeys coming up, one of which is to attend the Reading Festival of Crime Writing this weekend, and that is normally one of my best opportunities to write. Because, a lot of the time, this is my office: 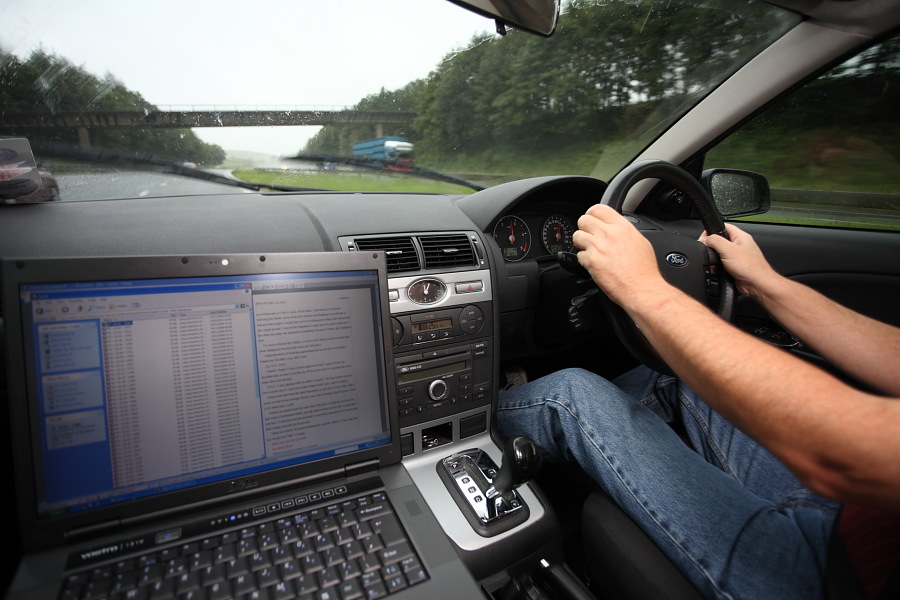 My old laptop (well, it’s more than six months old, so that makes it almost antique, doesn’t it?) has a cigarette-lighter adaptor, so I never have to worry about running out of battery. If it starts getting too warm, I rest it on an old clipboard. If we’re on the motorway, as in the pic, I can get more written in a couple of hours than during a day at my desk. No internet, no landline, just the ultimate bum-in-chair environment. I even have an LED light that plugs into a USB port, and is just bright enough to illuminate any bits of the keyboard I do need to look at (allthe Home/Delete/PgDn etc keys are in different places from my desktop keyboard.

Speaking of keyboards, I’m eternally grateful that I learned to touch-type a long time a go. And these days, it’s doubly useful because I’ve worn half the letters off my favourite ergonomic keyboard. I can’t seem to find this exact shape of keyboard any more. Curved ones, yes, but they don’t have the triangular gap in the middle, they just have stretched centre keys, and they’re dished rather than domed. 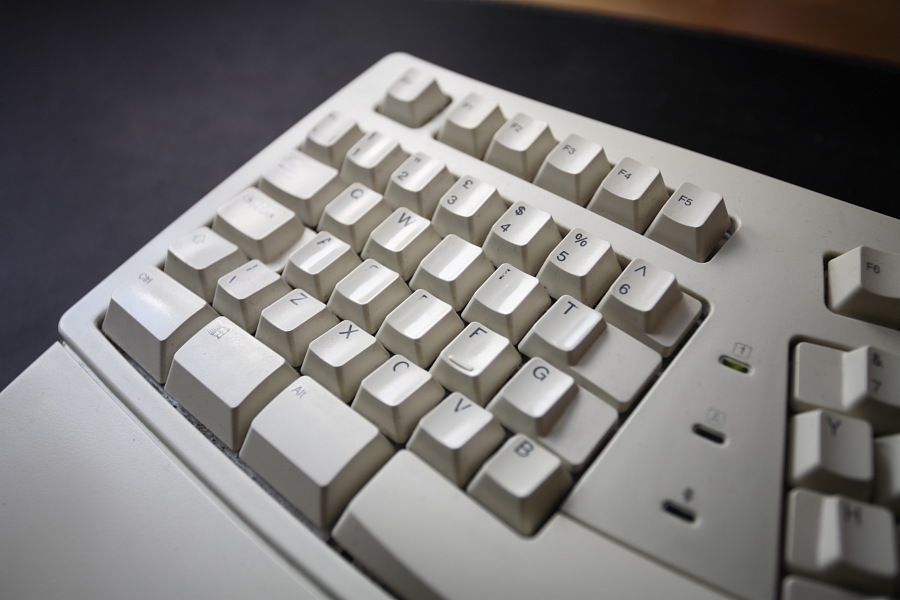 I’ve been using an ergo keyboard since I first had operations on my left wrist, after the fluid kept leaking out of the joint. (I blame the long reach for the clutch on my Suzuki RGV250 motorcycle.) Recently, I started having a lot of neck and back problems, and was advised by my physio to raise my monitor up further into my eyeline, and to buy a wedge-shaped cushion for my chair. I’ve done both, and my neck and back problems – touch wood – have stayed away ever since.

So, this is my untidy office space.

And yes, the arms of my typing chair are held together with duct tape, but it’s a comfy chair, and it still works, so why would I change it? I love the corner desk arrangement because it means I can rest my elbows on the desktop while I type, which reduces strain on my neck and shoulders. The ergo keyboard is one of the best thing I ever bought, and the widescreen monitor means I can look at two pages at once for doing edits, without having to resort to a microscope or binoculars to read the type. 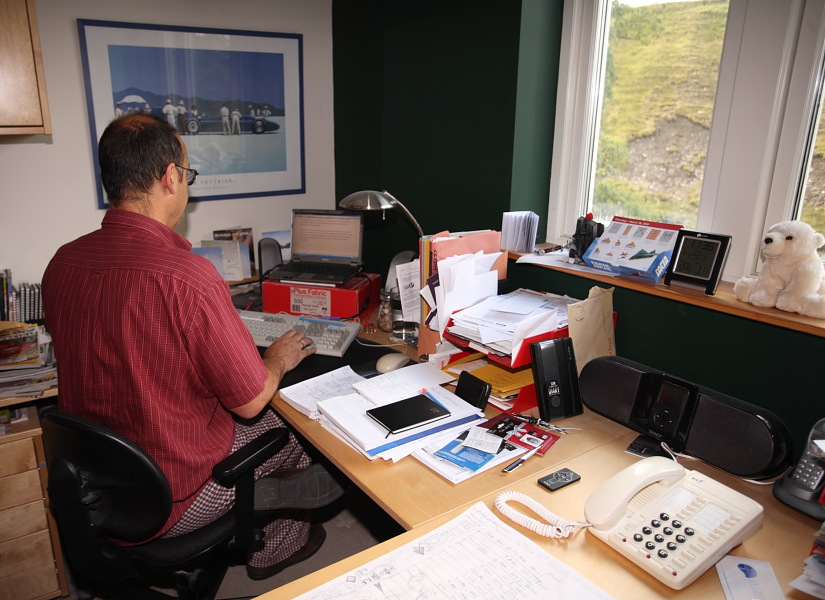 Of course, Andy’s side of the office looks much more industrious than mine. He’s hard at work on an article. And those are lounging pants, thank you very much, not pyjamas. (He doesn’t wear pyjamas…) Andy hasn’t quite mastered the correct use of a typist’s chair, as you can see. The Tannoy iPod dock means we’re usually listening to music while we work, 5500 tracks on full shuffle makes for some interesting segues, from Stone Sour to Zydeco, Frank Sinatra to Slipknot.

The polar bear arrived recently with a World Wildlife Fund credit card. I think it’s cold enough for him. The box of sheets on the window ledge is a build-a-paper-plane-a-day calendar, but Andy’s falling behind with production. I think we’re going to have a mad plane-folding exercise at the end of the year.

Of course, there are distractions to being at home. The first of which is the spruce tree you can just see on the right outside my office window, in which the red squirrels have built a drey. Last year we had a bunch of babies, who are even cuter than the fully grown squirrels. (Yeah, I know they’re just a rat with a bushy tail and a good PR agency, but even so…) 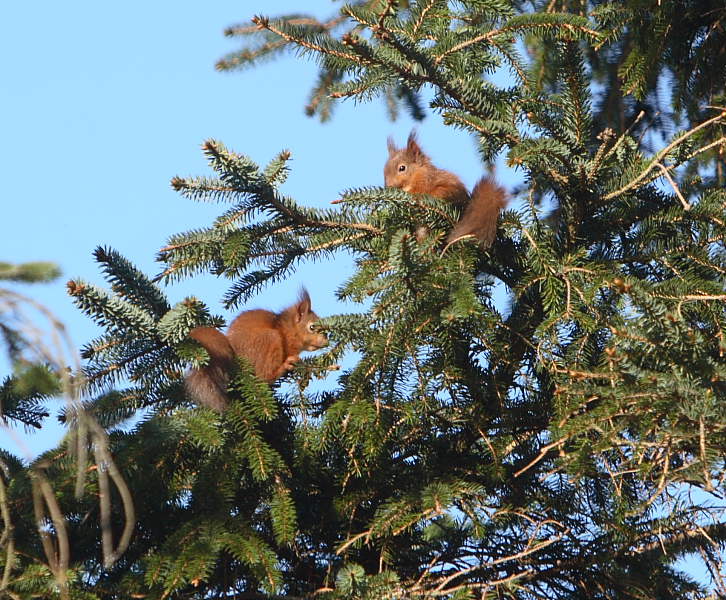 In case you’re wondering where the books are, they’re in the upstairs lounge, next door to the office. I’m in the midst of rearranging them at the moment, which is why there are piles of them on tables, most of which have come off the shelves behind where I’m standing with the camera, and have yet to be put back. The gaps are mostly from the CDs. I’ve been downloading our music collection onto the iPod and have been putting the CDs to one side as I’ve done them. They fill several archive boxes, also out of shot. (Come on, I’m not going to show you ALL my untidiness!) 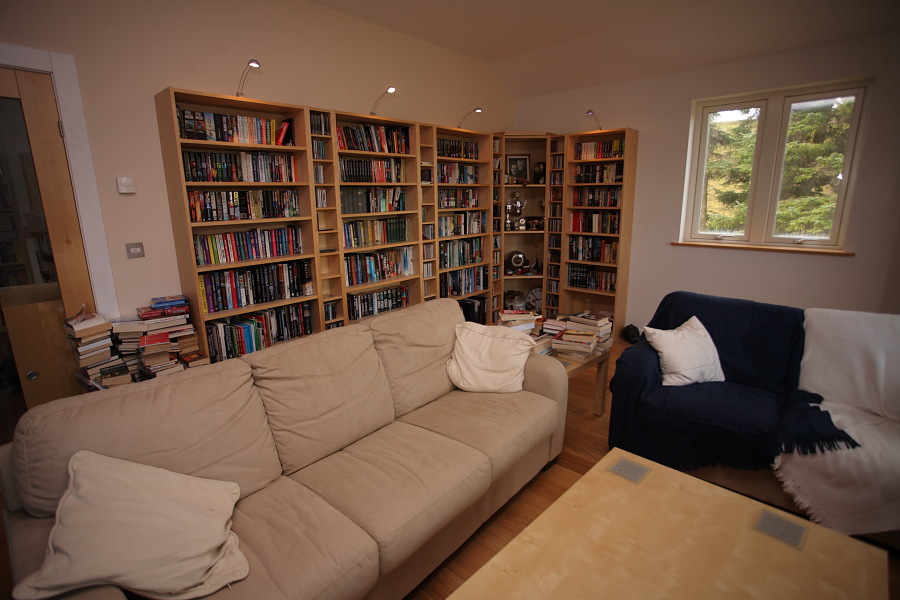 So, the process. Hmm, when I work that one out, I’ll let you know.

I think the first thing is persistence. It’s the old racing adage – to finish first, first you must finish. If you never finish a piece of work, you will never be a published author. It’s my opinion that there are far more persistent authors published than there are talented authors published. So, the first rule of my process is to GET ON WITH IT. A little at a time, and the elephant will get eaten.

Of course there are days when I really don’t feel like writing anything at all. I had one yesterday. I know I can’t afford to let myself have too many of those days. I HAVE to keep pushing forwards, or the book will stall.

To keep myself on track, I have a spreadsheet of my daily word target. It’s on a sliding scale. I work out when I’d like to have a certain amount done – say, 50,000 words. Then I break down the number of days until that date, and divide 50k by that number. If I have a good day, and do more than my target, the number for the remaining days drops. If I have a bad day (like yesterday, when my total was a big fat 0) then I regroup, recalculate, and move on.

I find around 1250 a day is a do-able target for me. I know from reading about some of my ‘Rati brethren, that would be a pathetic amount, but it’s a personal thing. It means I advance by 10,000 words every eight days. A book puts on weight at a surprising speed when you’re making that kind of progress.

Usually, the only time I don’t achieve my daily work target, is when I fall asleep at the computer. I haven’t quite mastered the art of writing in my sleep, although I’ve come pretty close to it a few times. My brother-in-law’s mum actually knits in her sleep. She knows when she’s nodded off working on something, because she always sleep-knits the same stitch pattern.

But anyway, I digress.

Getting started is always the hardest part. Finding the story is one thing. Finding the exact point at which I should invite the reader to step into that story is quite another. I try and get the first 10,000 words complete to my satisfaction before I start on the whole spreadsheet thing, otherwise it’s too tempting to run with an idea I’m not totally convinced about rather than unpick it all and start again.

I’m a planner, but not to the extent of wipeboards, I’m afraid. I like pencil and paper. When I’m creating an outline, I go for the basic idea and the broad outlines first, then keep going over it, again and again, adding in more layers of detail as I go, until I can practically do a scene-by-scene breakdown. This is still very flexible. If, when I get to a certain point in the story, it’s clear that my next scene doesn’t fit, I replot rather than write myself into a corner. I edit as I go, and summarise behind me so I can keep a track of the story so far. This is also invaluable for copyedits afterwards.

I don’t do lots of drafts, don’t just write in any given direction and see what happens. It doesn’t spoil a movie for me if I know the ending. In fact, I love watching films I’ve seen a dozen times all the more because I can enjoy the ride and the journey instead of worrying what comes next. I can savour the details. It’s the same with writing a book – just because I know the ending, doesn’t mean I’m not still excited by the method of getting there.

At the end of the day, my most important writing tools are these: 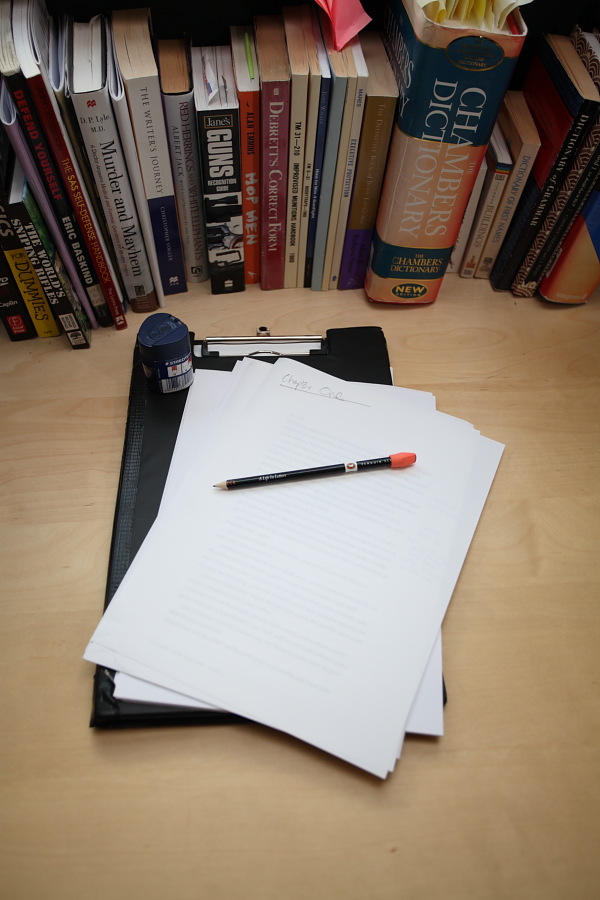 A weird and wonderful collection of books, some of which were bought second-hand because you never know when they’ll come in useful.

A pencil, eraser and an enclosed pencil sharpener, so I don’t have to worry about the shavings.

Apart from that, I just use my neck-top computer, and the complusive, obsessive desire to tell a story.

What more do you need?

This week’s Phrase of the Week is caelum non animum mutant qui trans mare currunt, which translated from the Latin means ‘they change their sky, not their mind, who scour across the sea’. I prefer to think of it another way: ‘The greatest journeys a man can make are inside his own head.’

39 thoughts on “Eating the Elephant”

@MollyJongFast Because nothing says "conservatism" like government approved architectural styles.

Meet your next binge read! Discover the incomparable, fearless homicide Lieutenant Taylor Jackson in this gripping psychological thriller series set in Nashville. ALL THE PRETTY GIRLS is on sale for $1.99, 14 is on sale for $3.99, and JUDAS KISS is on sa… https://t.co/LYFfyt77Sz

@LaurenBaratzL Not a pet. An owner.

Congratulations to @djpalmerauthor on the release of his fabulous new book #ThePerfectDaughter, on sale today!