My tenth novel, ALL DAY AND A NIGHT, will be out on June 10 (July 3 in the UK). That means it’s time for me to beg, scold, and bribe you to place your pre-orders before the hordes of rioting readers gather outside your favorite bookstore and take all the copies away.

“But how do I know I’ll even like ALL DAY AND A NIGHT?”

ALL DAY AND A NIGHT is the fifth book in the Ellie Hatcher series. And if you don’t trust me that it’s good, maybe you’ll trust these people:

“I’ve been a fan of Alafair Burke from the very beginning and, ten books in, she just keeps surprising me.” –Michael Connelly

“All Day and a Night is Burke at her finest: razor-sharp twists, stunning surprises and artfully drawn characters. The insider’s view of criminal prosecution is masterfully wrought and as usual, Burke makes you feel like you’re riding along with the detectives in the back of their unmarked car. You won’t want to miss this one.” -Karin Slaughter

“A masterfully plotted, psychologically complex thriller, Alafair Burke’s All Day and a Night raises larger questions about the choices we make, the mistakes we can’t undo. Whip-smart and emotionally deft, it delivers all the way through its final pages.” –Megan Abbott

“Spring loaded and razor sharp, All Day and a Night is a surprising and compelling thriller. But Alafair Burke has given us something more gripping than just a crime novel. Her story is about women, their drive, their compassion, and their public and private battles for success and acceptance.” –Ivy Pochoda

“Okay, it’s a Hatcher book with a bunch of good reviews. But what’s it about?”

You mean you don’t want the plot to be a surprise? Okay, here’s the short version: When the murder of a Brooklyn psychotherapist bears a signature linked to convicted serial killer Anthony Amaro, Amaro brings a wrongful conviction suit, asking to be released.

NYPD Detectives Ellie Hatcher and JJ Rogan are tapped as the “fresh look” team, charged with reinvestigating the case against Amaro.

Representing Amaro is a hardcharging celebrity lawyer who enlists a young associated named Carrie Blank to assist. Carrie has a reason to be interested. Her older sister, Donna, was one of Amaro’s victims. Determined to force the government to catch Donna’s real killer, Carrie joins Amaro’s wrongful conviction team with her own agenda.

As the NYPD and Amaro’s lawyers search for certainty among conflicting evidence, their investigations take them back to Carrie’s hometown, where secrets buried long ago lead to a brutal attack—one that makes it terrifyingly clear that someone has gotten too close to the truth.

Nope, I want to know more. Can’t I read some of it before I commit?

Wow, you’re really going to make me work for this, aren’t you? Yes, you can read the beginning of ALL DAY AND A NIGHT for free, online, right now. Just click here.

Fine. I do want to read ALL DAY AND A NIGHT, but why should I pre-order?

Pre-orders build momentum by signaling to both retailers and the publisher the level of an author’s support from readers. Pre-orders also count toward the all-important first week of sales, which can affect placement in stores and coverage by media. I wouldn’t ask (beg, scold, bribe) if it didn’t matter!

Did you say bribe?

So where exactly do I pre-order a copy?

You can find many of your favorite booksellers here. And I love signing copies for readers, so to order a signed copy, please see details here.

Fine, enough about the book already. I hear you got a new dog!

Yes! We welcomed this beautiful babe into our home this spring. Her name is Frannie, and she and Double are best buddies. Sign up for the newsletter; the next edition will be devoted to the tale of how she went from living on a beach in Anguilla to being a part of our family. 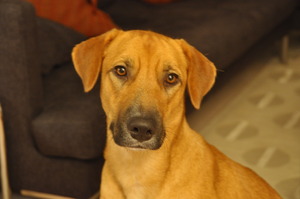 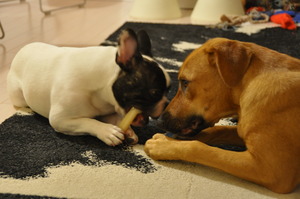