Today I’m going to use my Murderati post to make a mass call for opinions! Help!

I’m currently working on a novel set in Ireland. I’d like to give the reader an idea of the Irish accent without confusing them.

Now, here’s the thing. I know most books on writing say NOT to actually write in a character’s slang or accents (or to do so very sparingly). And when I’m teaching dialogue, this is the guideline I suggest budding writers follow. But now I’m going against that advice and actually writing the accent. So I need your help 🙂

Below is an excerpt from chapter 3 of Grounded Spirits, my next Pippa Dee novel, and I’m keen to get your thoughts. I have flagged the main pronunciation difference in the actual book (as it’s written below) and am wondering if this is enough. I should also say it’s a young adult novel so it needs to be clear for younger readers, too. This is the main character’s first encounter with an Irish person – an Irish woman in her 50s who works at the hotel where she’s staying.

Suddenly Fiona felt a warm breath near her ear. She jumped, letting out a little yelp, and then spun around to face the breath’s source. No ghost, just the waitress. In stealth mode, obviously.

“So you’ve seen her, den,” the waitress said.

Fiona noticed her thick Irish accent, including the “d” instead of a “th”—“den” instead of “then”.

“’Tis one of our resident ghosts, so dey say,” the woman continued.

“A ghost?” But not the one Fiona had seen yesterday … if it had even been a ghost, of course.

“Dey had a scientist in and all. See de face … doesn’t even exist in terms of paint. Like actual paint,” she whispered, leaning in toward the painting with Fiona. “According to de expert, ’tis de same pigment dere, as dere.” The woman pointed to the different shades that formed the face, careful not to touch the surface of the painting. “But ’tisn’t de same color, ’tis it?”

“No.” Fiona’s excitement was building. “A scientist examined it? Really?”

“So dey say. Wasn’t here myself.” She paused and looked up. “I’m Maggie, love.” She held out her hand.

“Hi. I’m Fiona.” Fiona shook Maggie’s hand. Maggie’s accent was a little difficult to follow, but Fiona had tuned into it enough that she could understand. And obviously every word that started with “th” was replaced with a “d” sound.

“Fiona…” Maggie smiled at her. “Dat’s a grand Irish name. Do you have Irish folk in yer family, den?”

Maggie nodded, and then they both stared silently at the painting.

Maggie broke the silence. “Do you like ghost stories?”

“I’m getting a bit old for them now, really.” Fiona knew that she looked a lot younger than she was, and she hated it.

“But you don’t actually believe in them, do you?” Fiona asked.

“Of course.” Maggie raised her eyebrows. “Dis hotel late at night…dere’s nothing else to explain what goes on. ’Tis ghosts all right. And more dan one, I’d say.”

First the boy in the window, and now this face? Could it really be that the Old Ground hotel was haunted? The building was old, ancient even, that’s for sure.

So, Rati, did you find the dialogue confusing or clear? Did the written-in accent add value or distract you? Finally, was it good that I pointed out the “th”/”d” thing twice or overkill?  I’m looking forward to everyone’s thoughts. 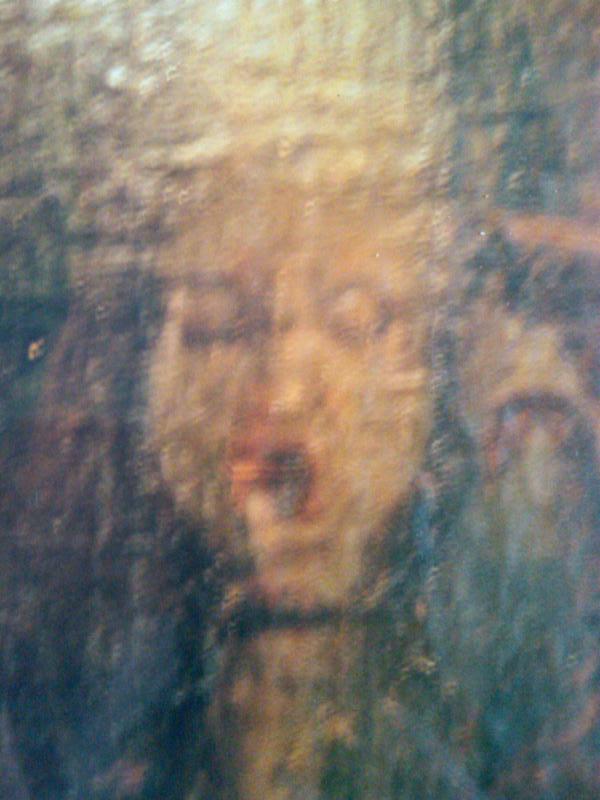 By the way, this is a closeup of the face from the painting the characters are talking about. It’s a real painting! Spooky, huh?

Note: In case you’re interested, the Irish language (Gaelic) doesn’t have a “th” sound and this characteristic transferred when the Irish started speaking English— and it’s still part of their pronunciation today. My husband is Irish and “th” becomes either just “t” or “d” depending on the context. So it’s dis instead of this, dere instead of there, Tursday instead of Thursday, etc.