As you may have realised, I shouldn’t be here this week, but with the sad retirement of Brett Battles from these pages, it was suddenly realised there was a breach, and I’ve stepped into it!)

I am a very unimaginative serial killer, I’ve decided. Over the course of my writing career, I’ve managed to dispatch quite a number of people, with means from a hit-and-run that forced the victim off the edge of a cliff on his motorcycle, to throat cutting, disembowelment, having their neck broken in a bathtub, and being buried alive.

I’ve had my heroine, Charlie Fox, kill with her bare hands (or feet) on several occasions – one nasal bone smashed up into the frontal lobe of the brain, and one crushed larynx are the ones that spring to mind immediately.

The reason for this melancholy reflection is that this week is National Crime Writing Week in the UK. Organised by the Crime Writers’ Association, the event celebrates Bloodthirsty Britain in all its gory glory, and I quote:

A survey carried out to mark the start of National Crime Writing Week, which runs between June 13 and 19, has cast light on some of the original ways that crime writers murder their victims.

The Bloodthirsty Britain research was carried out by the CWA,which is organising the week. Members across the UK took part.

The CWA asked how many people they had killed off over the past year (2010). The average body count was 8.38 and the most people ‘killed’ by one author was 150.

The most inventive means of killing included:

Sliced to death in an olive machine

Poisoned with soluble aspirin and ribena

Rigged a euphonium to land on victim’s head

Tied up and drowned by rising tide

Stabbed through the heart with a spangly stiletto

Gored on the horns of a goat

Answers to why people like crime so much included:

“People like to crack puzzles. They also love strong but deeply fallible or troubled main characters they can empathise with, and crime writers dish this up in spades.”

“Crime Writing is a fantastic genre to examine big moral questions about society, the State of Man as much as any so-called “literary” novel.”

“Creates suspense and allows you to explore the wicked/bad side of your own character that you don’t actually want to act upon in real life…allows you a window into that world without you having to participate.”

More than 30% of those surveyed read crime fiction or watched crime drama every day of the year, and more than 50% read it weekly or several times a week.

CWA Chair, the best-selling author Peter James, said: “This survey has thrown up some fascinating findings and underlines why readers so love crime writing.

“One of the big campaigns undertaken by the CWA at the moment is to support libraries and we know that crime forms the most popular genre when it comes to borrowings. This research emphasises the reason why it remains so popular.”

I took part in an event at Kendal Library in Cumbria last night (Wednesday, June 15th) together with fellow Cumbria crime writers Anna Dean, Diane Janes, and Matt Hilton. Strangely, nobody asked us what bizarre methods of murder we’d come up with in the past, but it got me thinking.

So, fellow ‘Rati, what’s the strangest method of murder you’ve ever either come across in a novel, or devised for your own victims – erm, all in print, of course …

This week’s hasty Word of the Week is outspan. Not just a brand of orange (in the UK at least) but a South African verb meaning to unyoke oxen or unharness a horse. Also a noun, meaning a stopping-place.

And on a final note, I had the honour to be interviewed by the delightful J Sydney Jones for his Scene of the Crime blog this week. Please stop by and say hello! 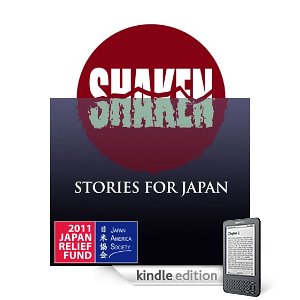 Thank you to Lil Gluckstern (below) for bringing up the topic of Brett’s contribution to SHAKEN, which I am delighted to mention here:

One hundred percent of the royalties from this new collection of original stories will go directly to the 2011 JAPAN RELIEF FUND administered by the Japan America Society of Southern California. The 2011 Japan Relief Fund was created on March 11, 2011 to aid victims of the Great East Japan Earthquake and resulting tsunami waves. With the funds that have been raised so far, $750,000 has been committed to nonprofit organizations that are on the front lines of relief and recovery work in northeastern Japan.

This collection was born out of the writers’ concern for the people in the disaster zone. SHAKEN: STORIES FOR JAPAN is an attempt by writers to pool their talents to help people in need, as musicians and actors so often do.

The book contains original stories by Brett Battles, Cara Black, Vicki Doudera, Dianne Emley, Dale Furutani, Timothy Hallinan, Stefan Hammond, Rosemary Harris, Naomi Hirahara, Wendy Hornsby, Ken Kuhlken, Debbi Mack, Adrian McKinty, I.J. Parker, Gary Phillips, Hank Phillippi Ryan, Jeffrey Siger, Kelli Stanley, C.J. West, and Jeri Westerson. As a group, these authors have won every mystery award there is and sold hundreds of thousand of copies. They’re all working at the top of their games in this volume. SHAKEN; STORIES FROM JAPAN is art for heart’s sake, and the purchase price will help those who are struggling to repair, or at least soothe, these terrible losses.

Not all the stories are mysteries; the consensus was simply that all writers should submit something that touches on Japan. Linking the stories are haiku by the 17th-century master Basho, translated by Jane Reichhold, and Issa, translated by David Lanoue. Both translators donated their work, as did the cover designer, writer Gar Anthony Haywood, and the e-book producer, Kimberly Hitchens.