No matter how well I plan, my book deadlines always overlap other major events.

For example, PLAYING DEAD was due when I was in the middle of moving. FEAR NO EVIL was due between Thanksgiving and Christmas–a hectic time for normal people, and an insane time for people with kids (school Christmas plays, choir performances, family events, shopping, and the kids are out of school!) 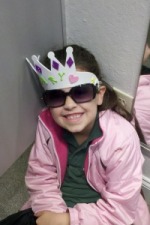 Birthday GirlThis month, things crept up on me . . . My daughter’s 8th birthday (Friday the 25th); my husband’s 50th birthday (Wednesday the 30th–he shares his birthday with Eric Clapton–and we had the party last night); two volleyball tournaments (last weekend and this weekend); the Dreamin’ in Dallas conference where I’m the keynote speaker next Saturday (and yes, I need to write a speech . . . or at least have some notes!); the RT conference starting on the 6th (and all the prep before then); and then the Thriller 3 anthology, of which I’m the managing editor.

Usually, I can juggle pretty well, but when everything happens at the same time, I get a little stressed :/

This time, however, I’m not as stressed as usual. My frustration is that I know exactly where the story is going, yet can’t sit down for 5 days straight and write. A week ago, I hit a major turning point, saw that I’d laid the ground work for something pretty cool (no, I didn’t plan it, it just happened that way) and now I want to write non-stop . . . but with kids and responsibilities, I can’t. This is one of the few times I wished I lived alone in a cabin in the woods (with running hot water, electricity, and food) and not have anything else to do but write. Not just because of the pending deadline, but because I’m loving where the story is going and I don’t want to lose the momentum. I want to get into the zone and never leave it.

Every book seems to be a little different–some start “easy” and get harder; others start hard and get easier; but inevitably, I have two major turning points: the beginning of act two when I get stuck (always) and go back and write and rewrite and rewrite, constantly thinking that the book sucks, I can’t write, I should be flipping burgers, everything is total garbage . . . then something clicks and I can move on. Then, at the beginning of act three,  I “see” the book as a whole, have (usually) figured out the ending, and all I want to do is write 24/7.

My zone is focus plus excitement. I am so in-tune with the story, that I can’t NOT write it. Being torn away from the book is emotionally painful. I stop writing not because I can’t think or get stuck or reach the end of a scene, but because I’m literally falling asleep at my computer. And the first thing I do in the morning is rush to the computer and start writing.

So really, I’m not at all upset that I needed to be up at 6 a.m. on Sunday for a volleyball tournament 45 minutes away . . . I’ve already mapped out the two closest Starbucks.

Last Thursday, Zoe and I spoke and signed books at M is for Mystery. The crowd was small, but very interested — I think because Zoe is so entertaining! She’s smart and funny, my two favorite traits in a person.

Me, Ed Kaufman, and Zoe Sharp at M is for Mystery

And I have some good news . . . LOVE ME TO DEATH is a finalist for best romantic suspense in the RITA award. The winners will be announced at the RWA conference in NYC at the end of June.

Apologies for the short blog — that deadline thing! So I’ll leave you with a question.

I often buy books that final in contests like the RITAs and Edgars and Thrillers, especially debut novels and books that are nominated in my own category. For example, this year I’ve read 5 of the other 7 nominees; I just ordered the two I haven’t read. Do you use contests as a shopping list? Do you find that you’ve already read them before they were nominated? Have you found any favorite author because you bought them after they won or was nominated for a writing award?