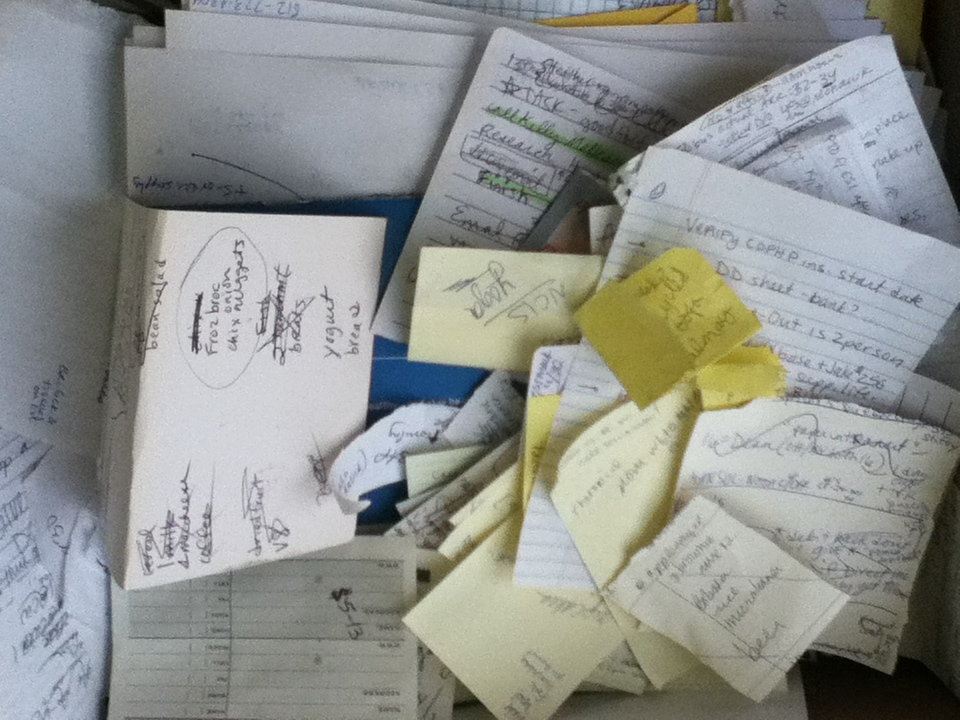 My life is run by two lists. One is the day job list, which cannot be set aside. I run a thirteen-state Western Region for my sales job and my travel and daily activities are dependent upon the schedules and daily lists of dozens of other sales reps and distributor representatives. This list weighs me down.

List Two is the everything else list, which includes ALL of my writing endeavors and obligations, as well as my personal business issues, medical, housing, kids’ school obligations, bills to pay, and the never-ending “honey-do” list. This list weighs me down.

In addition to these two enormous lists, which I keep as separate computer files, I generally write a Daily To-Do List, which combines the twenty or so most important things that must be done each day, culled from List One and List Two.

I used to experience great joy crossing things off these lists, but the trick has grown old. I no longer find happiness in the process.

I’m over-committed and I have no idea when it’s going to end. I will have to experience a complete lifestyle change for the deluge to stop, and I don’t see this happening for a long, long time.

I used to be able to juggle a week’s worth of commitments in my head. Each week I’d do a quick review and prepare for everything that would happen in the next seven days.

Now I focus on what’s supposed to happen today only. I see exactly what’s in front of me and nothing more. I’ll go through my entire Monday without realizing that Tuesday morning I’m boarding a flight to Minnesota. And that ain’t good, because sometimes I need an extra couple hours in my day to launder the underwear. God forbid I should need a little dry-cleaning done.

My creative commitments are insane. Judging two major competitions simultaneously (aka, reading hundreds of novels and short stories), researching and writing a new Hayden Glass novel, writing a short story on assignment, doing panels and speaking engagements…it’s crazy. And I know I’m not alone – most authors I know are just as busy, and most of them are juggling day jobs, as well.

At a recent sales meeting I learned that when people focus on more than three goals their chances of succeeding at anyone of these goals falls dramatically. When you have more than seven goals you might as well give up. You can’t do everything and do everything well.

Point in case – what the fuck is going on with my writing? Where is my third novel?

When I wrote Boulevard and Beat I had two major commitments. The day job and the book. That’s where my head was. Worked during the day, wrote at night. I finished two good, solid books that way. Since I’ve been published I’ve allowed myself to be torn in a hundred directions and the end result is…no book.

I have made one major addition to my commitment bucket, however. I’ve decided to make my family a priority. So now I have three major responsibilities – the day job, the current novel, and spending time with my family.

So, what happens next? I fill my schedule with so many commitments that one of my three important goals gets axed. I’ve learned from experience that I cannot risk endangering the day job, so that one stays. I’ve also learned that taking on any new responsibilities is not worth alienating my wife and kids.

And thus the thing that gets the shaft is my writing. Because, when I’m REALLY working on a novel I spend four or five hours at it every night, after the day job. Another eight to ten hours each day of the weekend. Which means there’s no time for anything else, except work and whatever I can schedule with the family.

But there’s only one me, and the gap between when my last novel came out and when my next one launches is growing ever wide.

These are good problems to have, I concede. I’m fortunate for the good fortune. But I’m scattered, and I wonder if the process has caused the good work to suffer. I wonder if focusing on twenty goals is killing the potential for success of goals one-two-three.

No wonder the years are passing by. There’s no time left to contemplate, to think, to reminisce. Not when there’s so much to do.