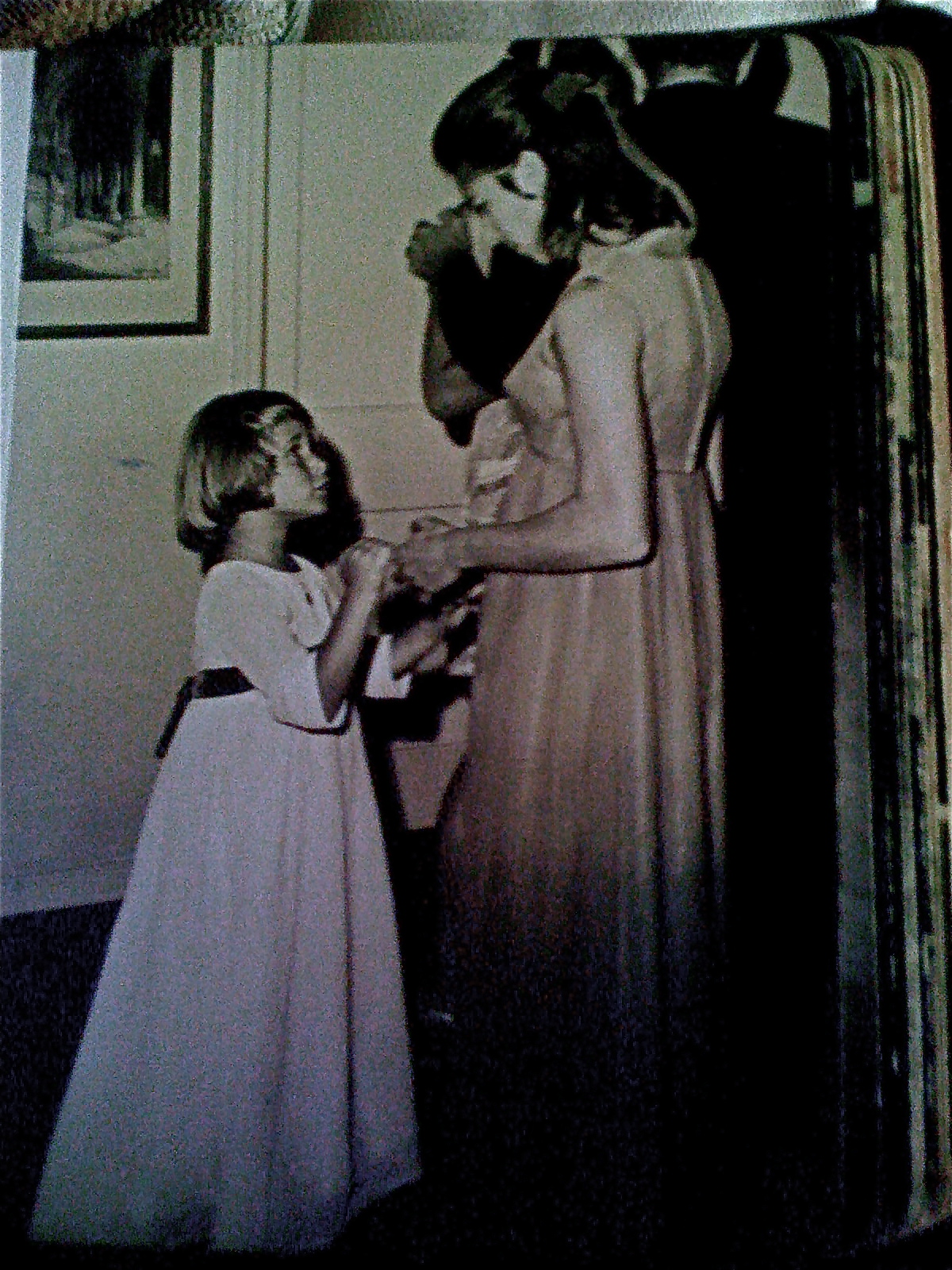 I have long been fond of and amused by George Burns’ very wise observation that, “The secret to a happy life is to have a large, loving family in a distant city.”

And that’s pretty much why, I think, having cousins is so awesome–and aunts and uncles and all that goes with them. You get to hang out with people who totally get your jokes about family stuff, because you’ve all spent time keeping an eye on the big pot containing the soup of communal backstory. Taking turns stirring, keeping the fire going, occasionally adding a bay leaf, asking if everyone’s okay with a little onion or garlic, and will the little kids want a small bowl of the stuff. 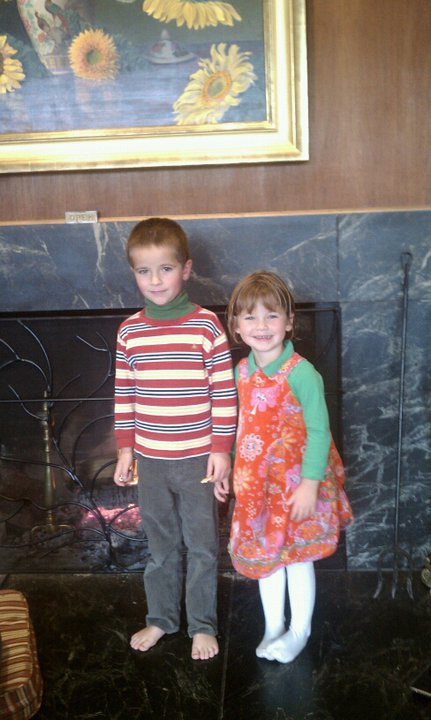 And a really fine and profound Thanksgiving is one at which everyone has taken their turn stewarding that rich potage, and you all get to sit down together around a long table and take communal strength from the finished product, breaking bread and pouring each other wine and sharing stories about the soups of years past and the soups yet to come. Gorgeous stuff, what the best parts of life proceed from, how we survive the kinds of fear JT was writing about yesterday.

This is the second year in a row that my kid Grace and I have been lucky enough to share in the Thanksgiving celebration of my Aunt Julie’s extended family. Julie’s my mom’s sister–my aunt AND my godmother–and her husband, Uncle Bill, has long been one of the greatest mensches in my life, through thick and thin. Well, both of them have, since I am going to extend mensch-dom to chicks, because it’s eminently true in the case of these two. 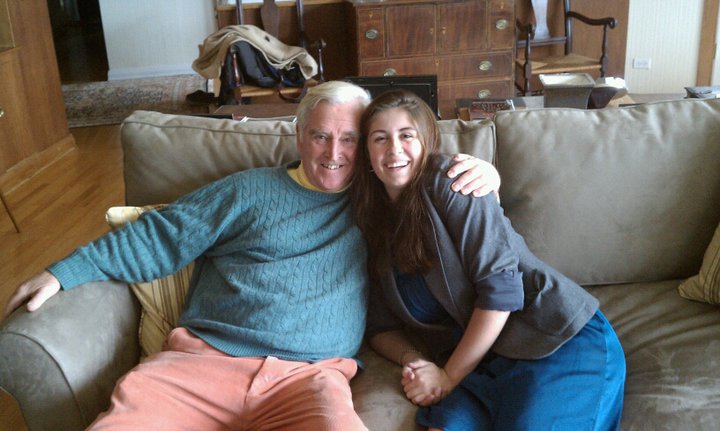 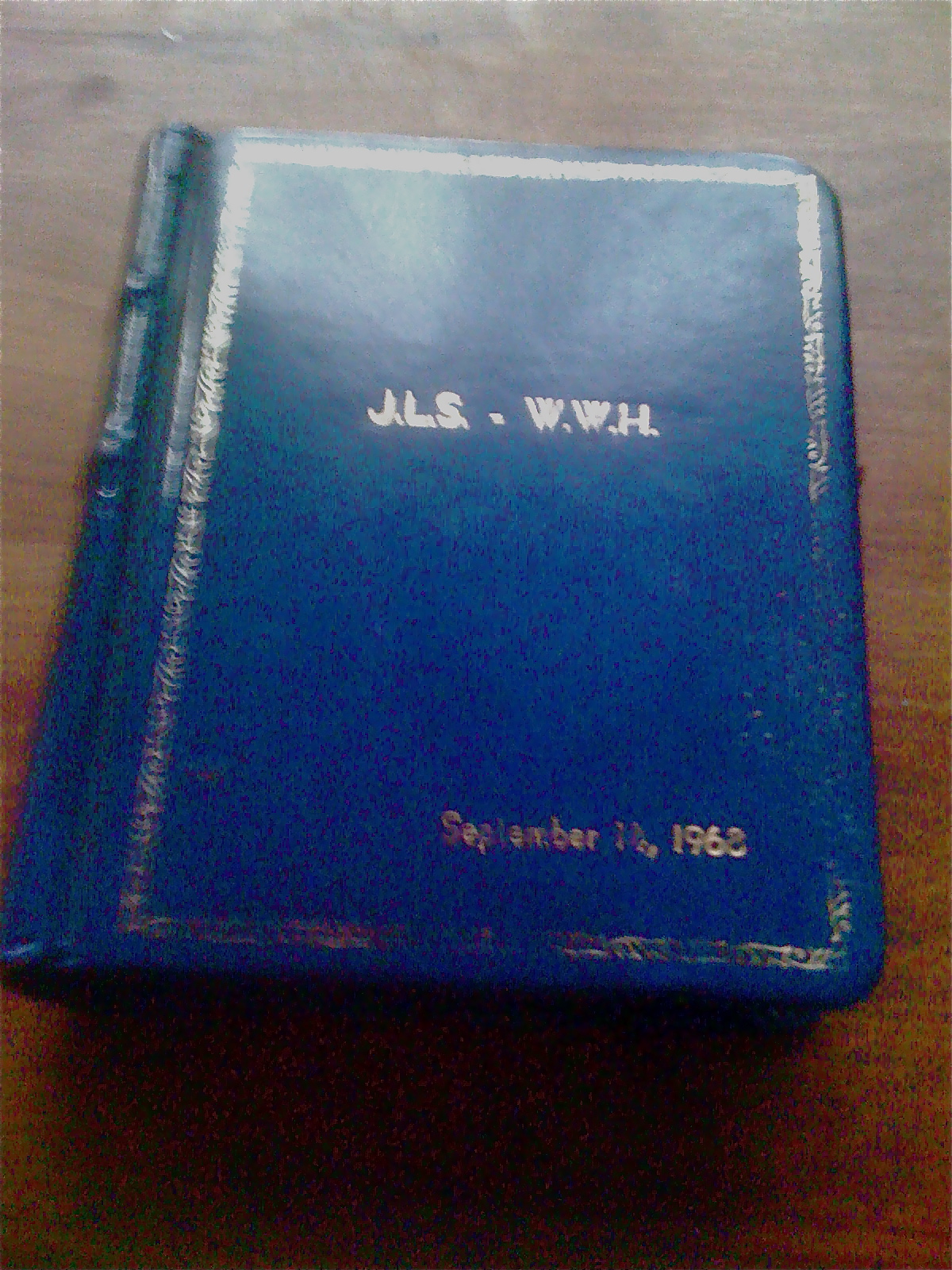 I wore a little ankle-length organdy dress–through which you had a hint of of the ice-blue silk petticoat beneath–and a tiny pair of ballet slippers that had been dyed to match the rich, clear emerald green velvet sash tied around me at a sort of Jane-Austen altitude above my waist. 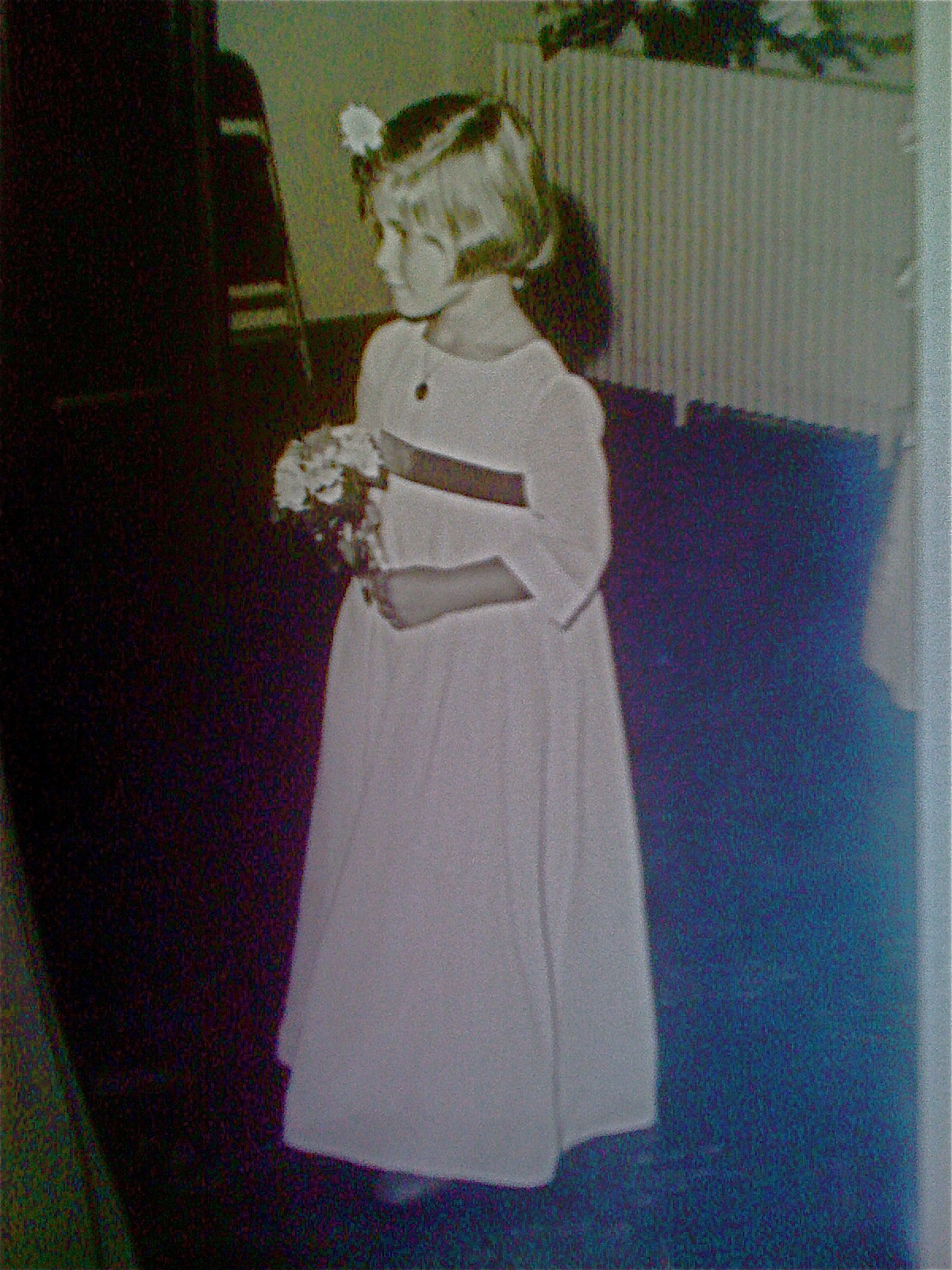 I remember tons of details about that day, although I was only five. Aunt Julie’s bridesmaids, including my mom, getting dressed in a birdlike flurry upstairs in my grandparents’ house. The little bouquet I carried, walking up the aisle of Christ Church in Oyster Bay… 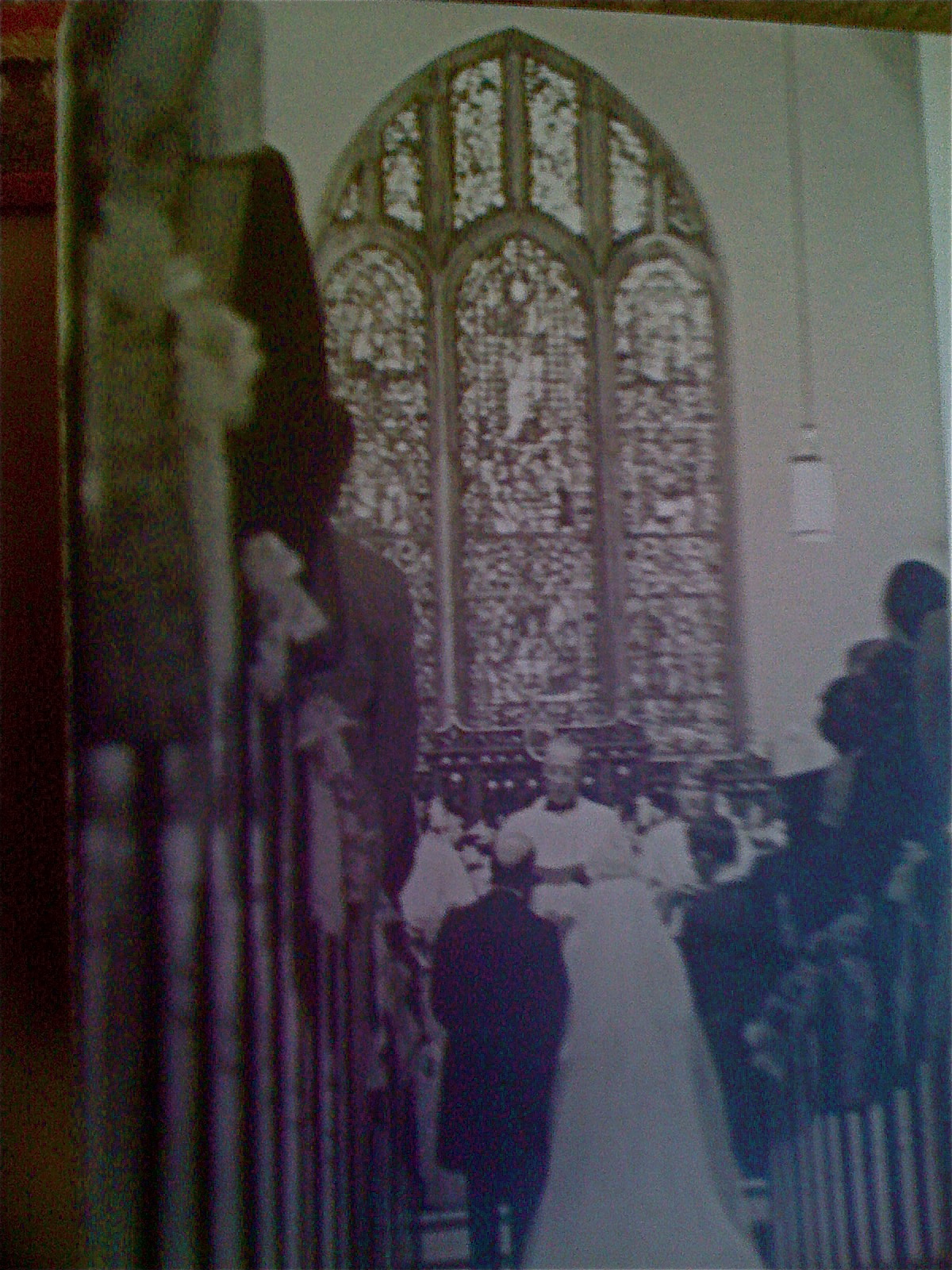 My Grandfather Thurston gives away the bride

…standing in the receiving line with the large buoyant wedding party on my grandparents’ verdant lawn, overlooking all the sleek boats that bobbed at their moorings on the sparkly cut-glass surface of the wonderfully protected little harbor below us… how young everyone was, in retrospect, though they were literally giants to me and so immensely sophisticated at the time, inhabiting the grownup world that seemed to shimmer at such an impossible distance I couldn’t fathom ever assuming a place in it…. 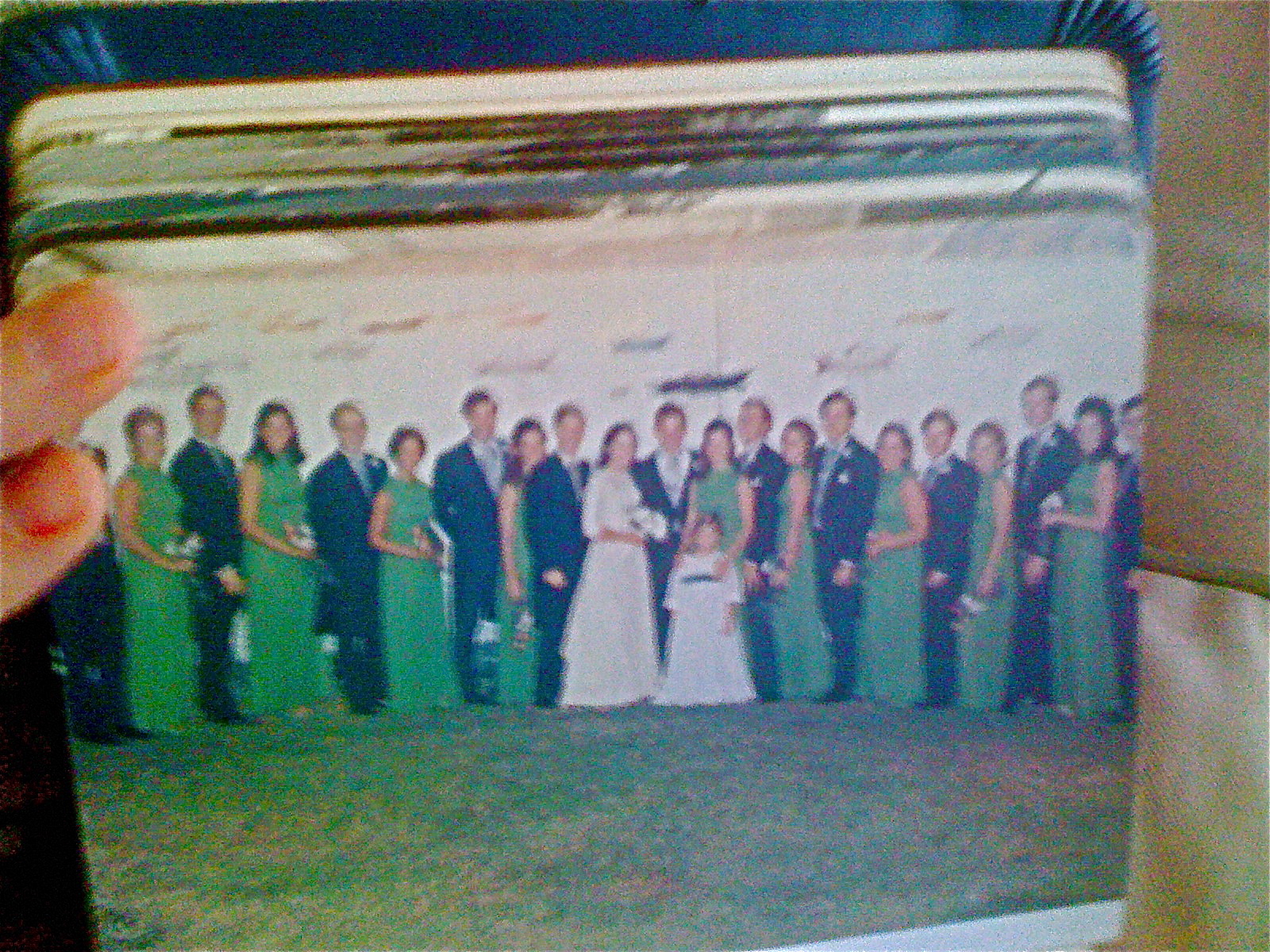 And I remember everyone gathered at the bluff-edge of that lawn, every last guest coming forth from the stripe-tented dance floor, laughing and egging on Uncle Bill and his brothers Charlie and Tony and all the ushers as they clambered and jostled and tumbled over one another for the traditional Hoyt Family wedding-day pyramid. 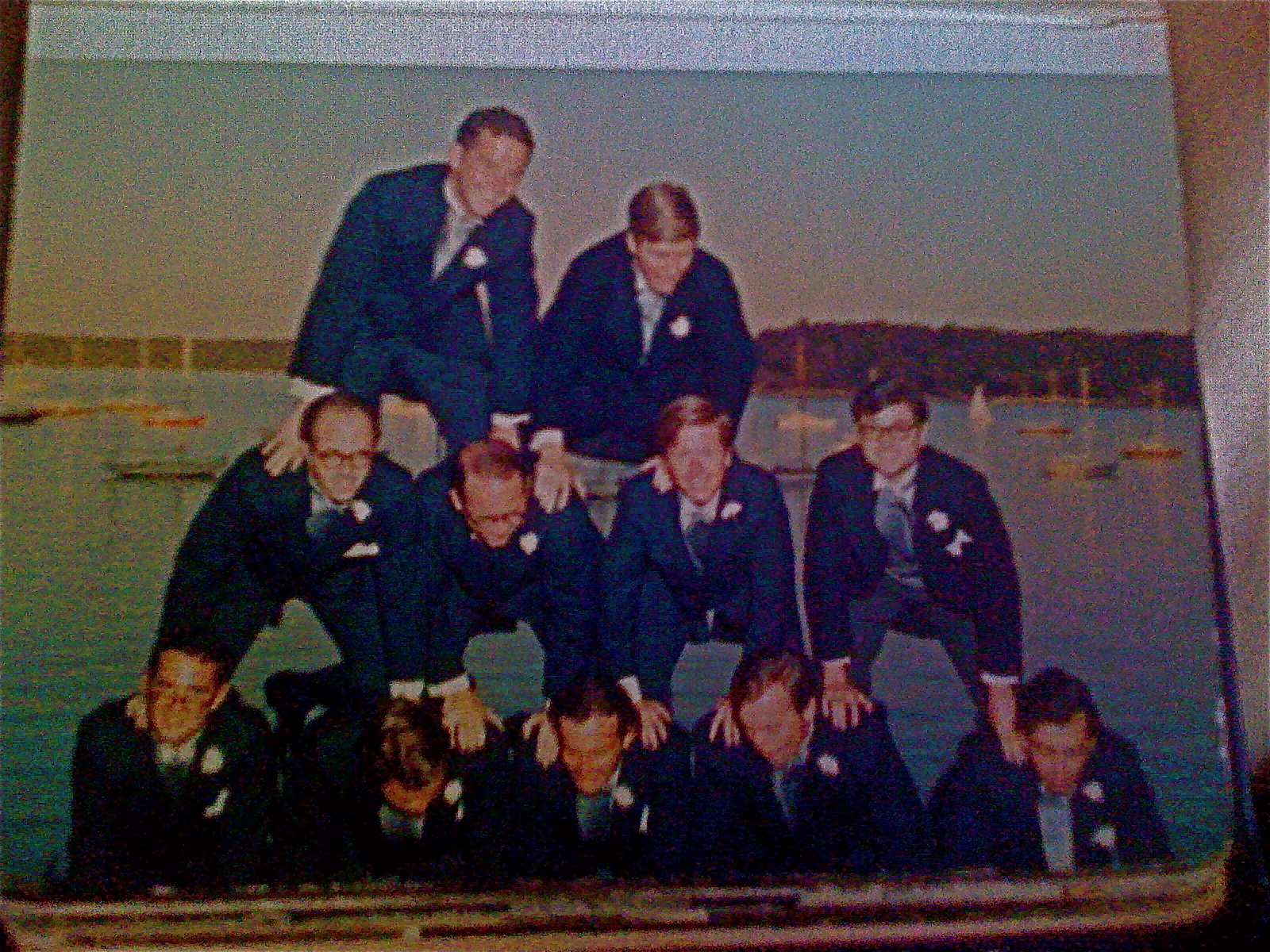 This effort was captured for posterity by the wedding photographer right exactly at the Hoyt-boys-et-al’s final, brief, teetering moment of communal geometric triumph over the entropy of physics and gravity, high spirits and camaraderie and champagne–back when the latter was still served not in flutes but in those wide, shallow stemmed glasses which could themselves be stacked into a pyramid of celebratory translucence, allowing one of the white-jacketed bartenders to show off his professional chops by pouring from a magnum into the upper-most glass, the straw-gold liquid cascading downward from rim to rim until each vessel below veritably brimmed with its own portion of the bubbly. 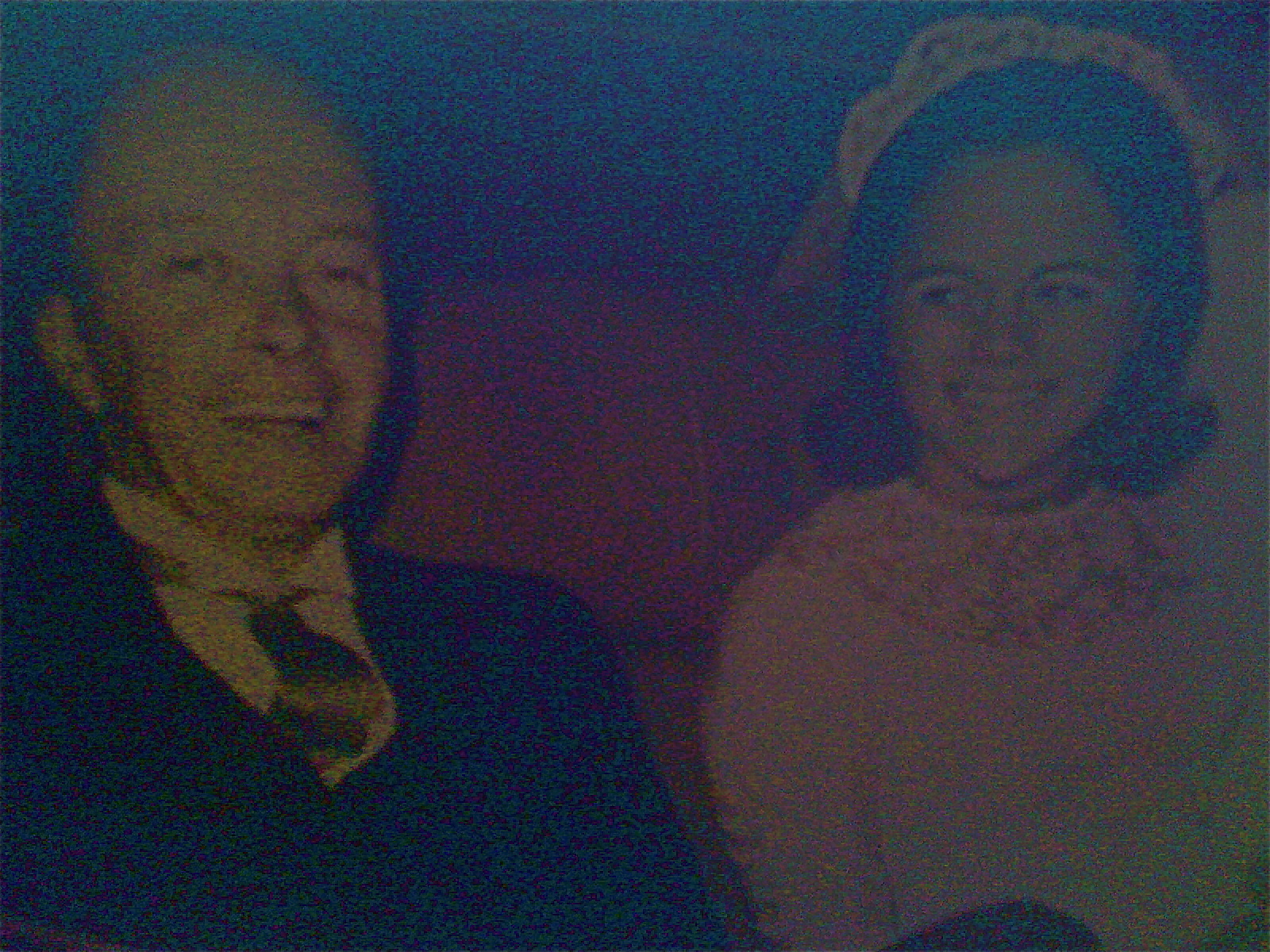 And both sets of parents were so happy, that day, because the moms had been friends since childhood themselves, and couldn’t have been more pleased that Bill and Julie had chosen one another as companions for the bright road ahead. 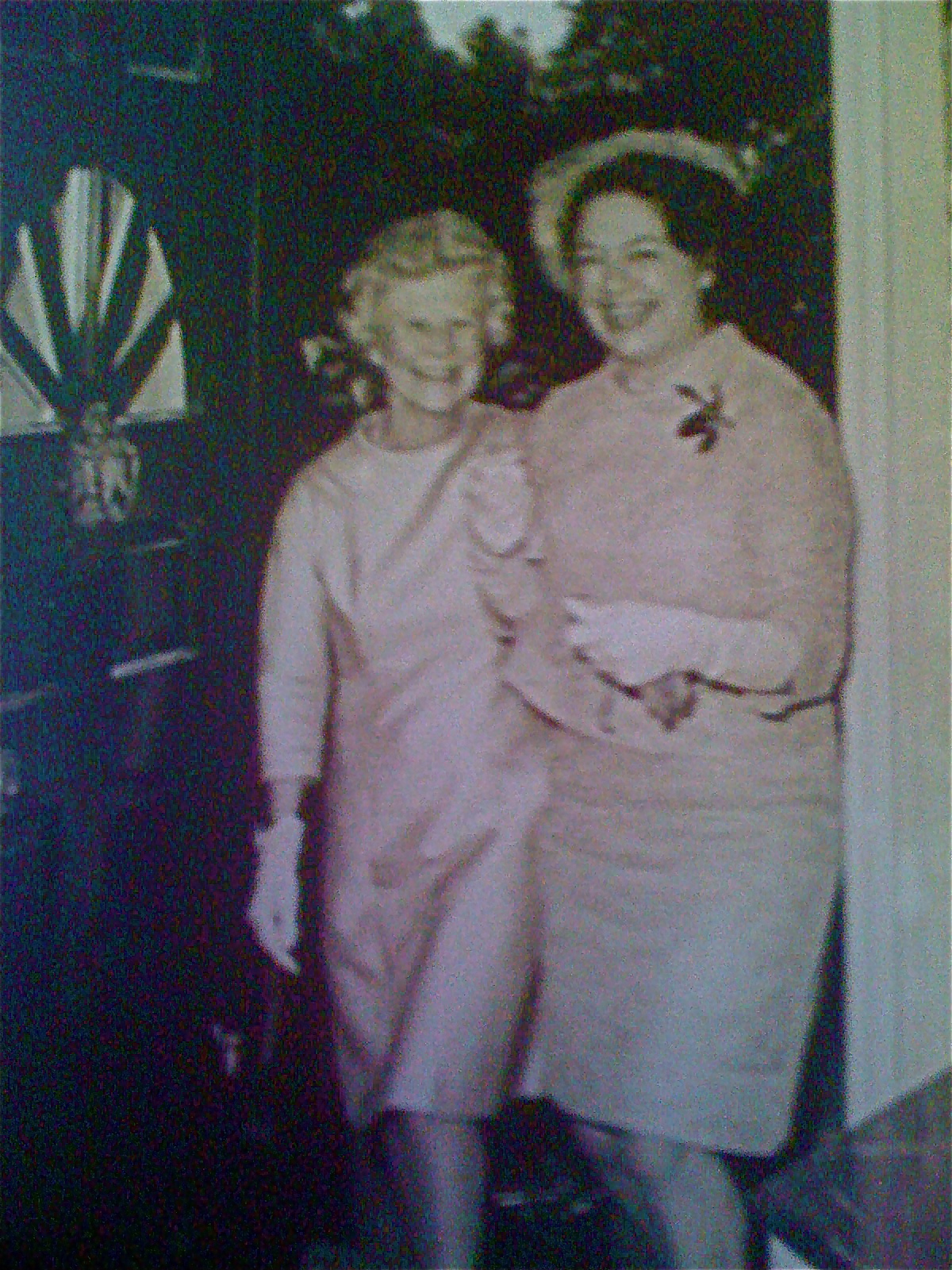 Betty Hoyt and my Grandmother Ruth

So–here and now–my daughter Grace and I have been staying at Bill and Julie’s house in Vermont these last couple of days. Cousin Allison is here, and yesterday we all drove half an hour over to Uncle Tony’s house–the place that was built by Great-Uncle Win and Aunt Lynn, no longer with us–for the day’s official culinary event.

I made the sweet potatoes, having been emailed the perfect James Beard recipe by Uncle Charlie’s most fabulous wife Deborah. Uncle Bill took on creamed onions and the turnips. Cousin Victoria (Charlie’s daughter) was there with her excellent husband John and their two little kids. John was perfecting the mashed potatoes as we all tumbled into the warmth of Tony’s chic but cozy kitchen. Tony had brined the turkey and ordered the pies, then made hard sauce.

Bloody Marys were consumed, iPads shared and discussed (I shilled for a couple of pal’s books, which Charlie downloaded from Amazon),

the little children were charmingly well-behaved, and various distant relations called up on various cellphones and landlines. We even Skyped with Cousin Winthrop and his sublime wife Barrie, who were in their new place in Brooklyn with their brand-new baby, young Master August Elias. 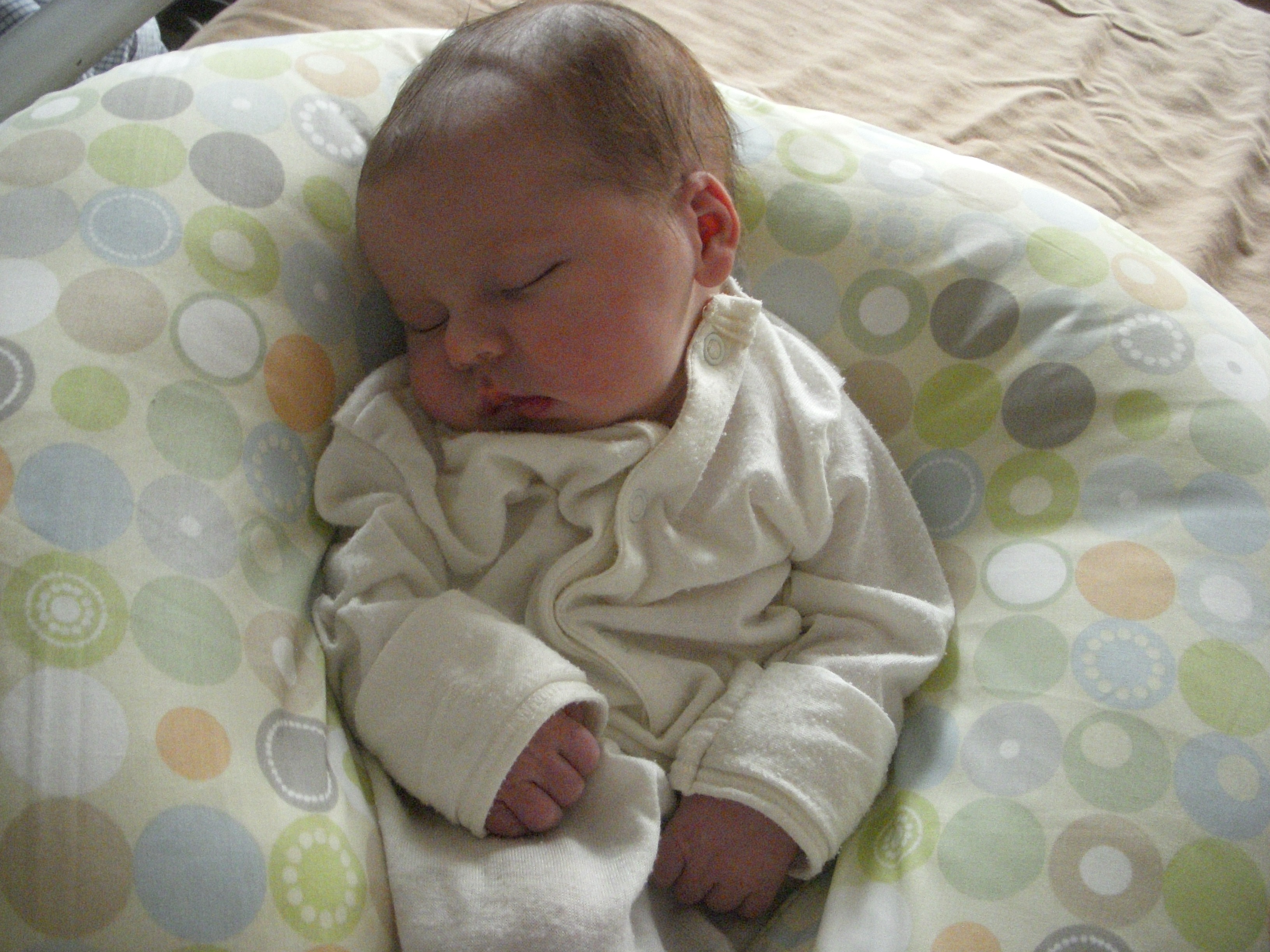 The wine was superb, the white-linened table arrayed with candelabra and beautiful plates, the forks and knives old family stuff polished to glory, and the talk was familiar and lovely and effervescent, overflowing with shared old jokes and joint beloved reminiscence of the two generations who’d come before all of us, now absent in body but never in spirit. 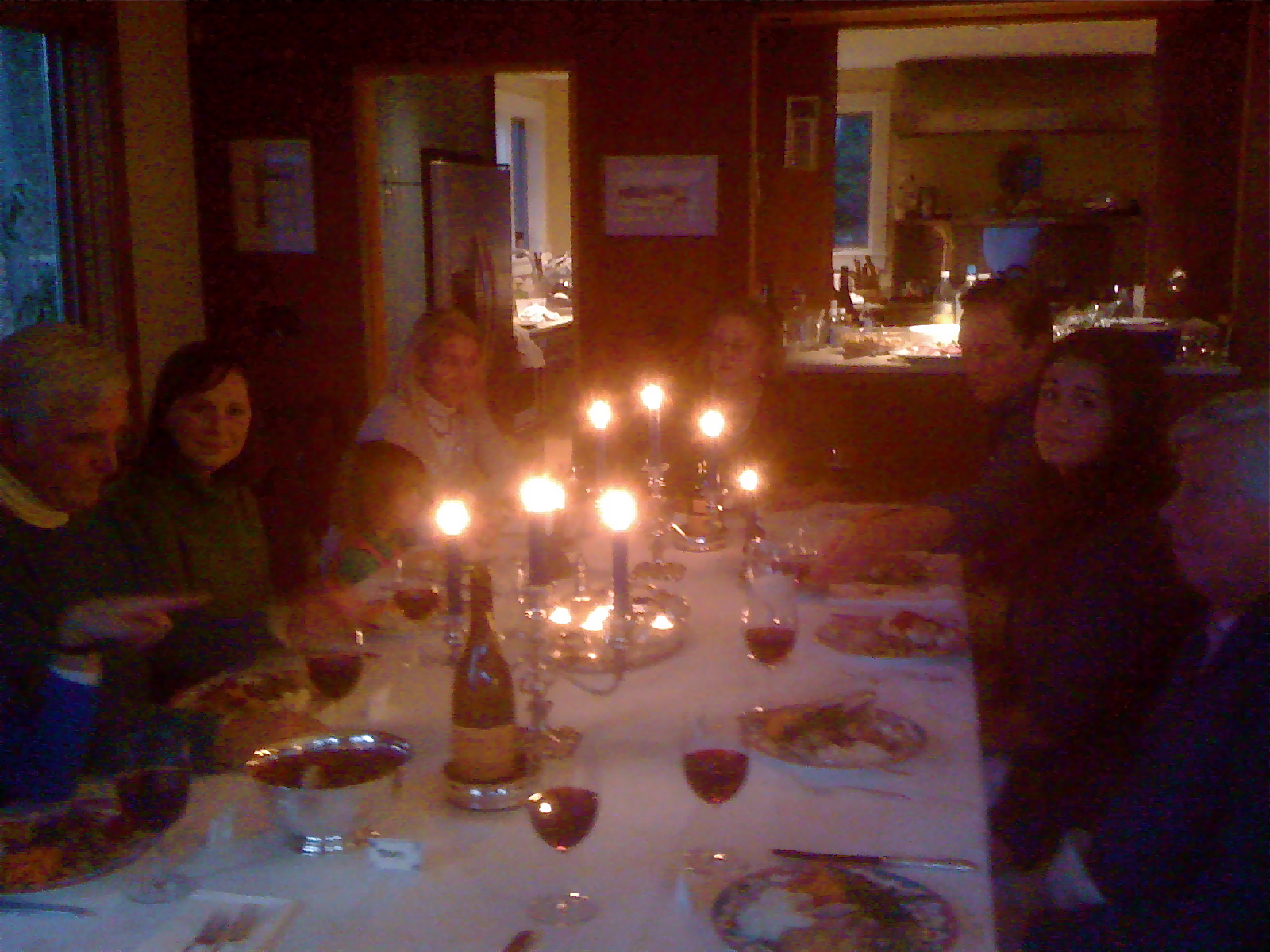 Uncle Bill had brought a big manila envelope of old photos that were passed from hand to hand, eliciting more stories and laughter and “Whatever happened to….” And at various intervals throughout this jollity, someone would pipe up with Great-Uncle Win’s favorite way to introduce any anecdote, no matter how dire: “Cute story! Cute Story!”

But I think that my absolutely favorite part of this most excellent day was when Uncle Bill looked around us all at the table with a dry wicked grin and said two words: “Mr. Whitney…” then paused for a sip of wine. 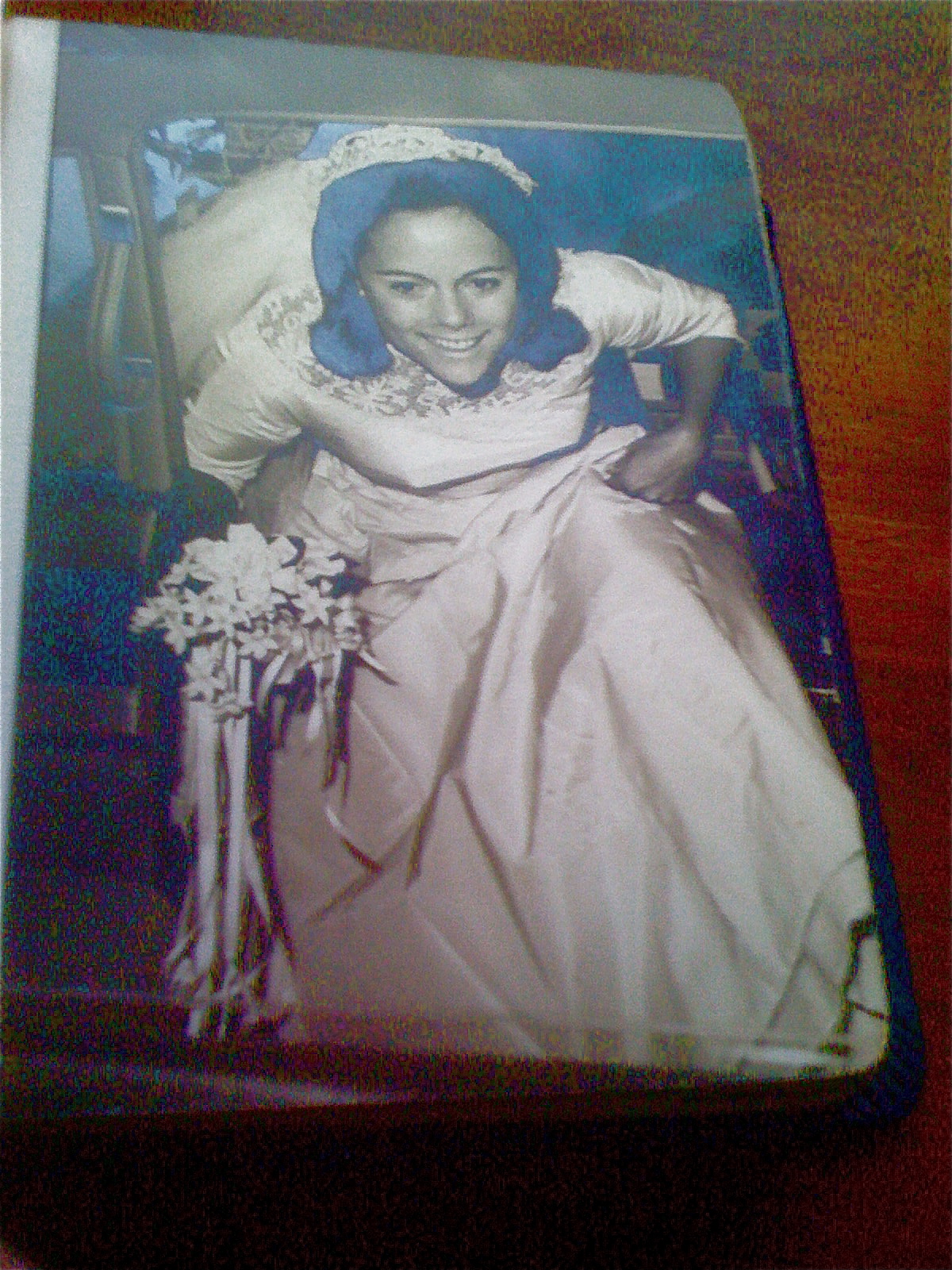 And then Uncle Charlie said, “How is Mr. Whitney?”

And Uncle Tony asked. “And what happened to Mrs. Whitney?”

“What about Mrs. Moseley?” asked Charlie.

Tony lifted his wineglass, rolling the ruby liquid around in it. “She married Mr. Von Briesen.”

“Good God,” I said, unfamiliar with this cherished litany, “what became of Mrs. Van Briesen?”

“Oh, yuh,” said Uncle Bill, pronouncing that second syllable sound with the dryness of Old Vermont. “All happened over the course of a single year, when we were kids on Long Island. Quite a ruckus. You’d go to a friend’s house and never know which other friend’s parent you’d find there.”

She was smiling, though. 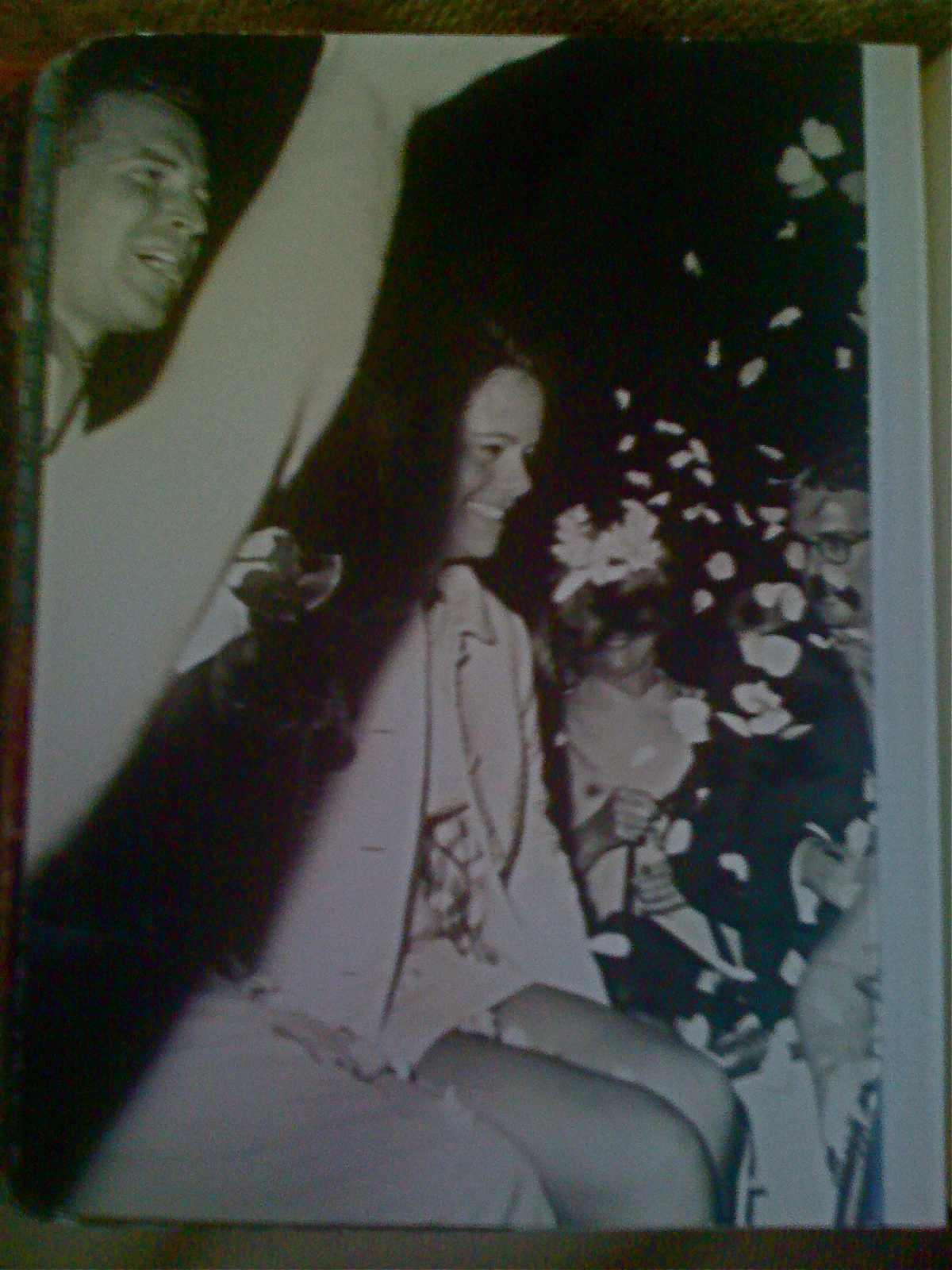 I love these guys. They are awesome.

And of course, being me, I have to wonder whether Mrs. Van Briesen was driving the car that hit Mr. Whitney.

Tell me an old story you love, oh excellent ‘Ratis…