(Welcome to my wonderful guest blogger for today Chester Campbell. His book, The Surest Poison, has just been released. Chester is a well known and well-respected mystery writer in the Nashville area. He’s currently Secretary of the Southeast Chapter of MWA and President of the Middle Tennessee Chapter of SinC. Perhaps we should ask him when he finds time to write?)

In her book How To Write Killer Fiction, Carolyn Wheat wrote: “Sentences are composed of words; the choice of the right words in the best arrangement is what we call style.” Barbara Norville said in Writing the Modern Mystery, “Style may be consciously contrived or may flow out of you from who knows what nether regions of your mind.”

I’m not sure what nether region it came from, but I think the process of writing Private Eye novels caused me to develop the style I’ve become comfortable with. I started my career as a novelist after retiring from 42 years of writing in various fields, from newspaper reporter to non-fiction freelancer to political speechwriter to magazine editor to creator of advertising and public relations copy. I began with spy stories just as the Cold War ended. It was the genre I had loved to read for years.

I won’t go into my agent horror stories. It’s enough to say the manuscripts remain stacked in a corner of my office. The message I got from one agent was that my greatest sin was overwriting. I’d never heard the term. The dictionary defined it: “To write about in an artificial or an excessively elaborate, wordy style.” You need to trim the 600-page manuscript by a third, the agent wrote. I slashed and cut and trimmed until I got it to a manageable size and the agency took it.

I finished a few more books before realizing I tended to write descriptions that were excessively elaborate and wordy. Meanwhile, the post-Cold War spy story market had about dried up, and I turned to reading more conventional mysteries. I particularly enjoyed Robert B. Parker’s Spenser series. It was also the heyday of James Patterson’s Alex Cross stories. Parker’s snappy dialogue and Patterson’s short chapters resonated with me.

After a trip to the Holy Land in 1998, I came up with the idea for a book about the discovery of an ancient scroll. It involved a retired Air Force investigator whose wife became a hostage to the return of the scroll. As I worked on the book, I found myself toning down the descriptions and using short, snappy dialogue for the most part. It quickened the pace of the story, enhanced movement of the plot.

When the book found a publisher and garnered reviews with comments like “a classic page-turner,” I knew I had found my style. I continued to hone it, using the characters to develop a series. I followed the pattern of shorter chapters and cultivated the spare writing style that is now my hallmark. Too much detail will slow the pace. When describing a scene, I give only enough to let the reader see where she is and stir her imagination to create the rest of the picture.

And I’m wary of explaining things too deeply. “Don’t underestimate your readers,” my first editor told me. “They know a lot more than you think they do.”

The bookshelves are filled with lots of different writing styles. Which do you prefer?

15 thoughts on “Cultivate your writing style”

“She is going to die tonight.”

We’re counting down until HER DARK LIES releases. Just 4 days to go! Here’s a sneak peek. Did you preorder yet? 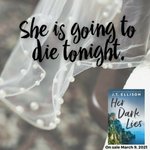 @ericbeetner Want me to put it up at my house? I could do like museums and put a sign on it that says "On Loan From The Beetner Collection."

@noteon I've been hostile to Republicans online and in print since the mid 1990s.