But I’m so angry I could spit.

It’s not the kind of anger where steam comes out of your ears and the blood vessels in your eyes burst and the cords in your neck stand out, and you can stride about and break china while raging at the world.

It’s a small, pointless, useless kind of anger. The kind that burns you up inside so cold and fierce it makes your hands ache.

You see, I’m angry over something stupid. Something that is done and out there and I can do nothing about.

A simple mistake on somebody else’s part, that probably seems little more than a minor slip-up to them. The kind of everyday error that will be forgotten in the time it takes to drink half a cup of coffee, take a phone call, have a smoke break.

Yesterday, I arrived home to find waiting for me a copy of one of the magazines I photograph for – and you’ll excuse me if I don’t tell you which one. At first, I was delighted. I’ve clocked up another front cover. All kudos. Lovely.

Then I had a leaf through and found an advert for a company involved in one of the photoshoots. The advertising department had previously phoned to ask if they could use one of the photos I’d taken in the advert. As always, I said yes, but asked if it would be possible to have a photo credit. ‘Photo by…’ or maybe ‘Photo courtesy of…’ and my name.

Nothing else. I don’t have a website for the photography. When I first started doing it, such things did not exist, and since then I’ve never needed one. Editors in the field know my work. If new ones want examples, they can take a walk through a newsagents and they’ll find plenty.

This advert had my name on it, in small print below the picture. So far, so good.

In much larger print across the bottom, it also had my work email address. Still no problem, although I didn’t ask for it. I only tend to do magazine shoots, or favours for friends, so I don’t really need for people who don’t know me to get in touch.

It also had my mobile number, which started me getting a bit twitchy, but the final straw was my home telephone number. And, just in case anyone didn’t fully appreciate that fact, it had a helpful (h) after it.

Now, there will be many of you who are sitting there at this moment, going, “So what?” And, to be honest, that’s what the person in the advertising department was clearly thinking when I called to point out their mistake. Particularly as the biggest cock-up – as far as they were concerned – was the fact that they’d managed to include all my details, but no contact information at all for the company whose services they were actually supposed to be advertising, who will rightly feel slightly miffed about the whole thing.

I’ve probably bored you all before with the story of the incident that kick-started my interest in self-defence as well as my career in crime writing. But for those of you who don’t know, many years ago, when I was working freelance for a motoring magazine, I went out to do an interview with a guy who was supposed to own an interesting collection of cars. When I arrived at his house, he seemed very surprised that my Other Half, Andy was with me.

And the collection of cars did not actually exist.

That was not long after a real estate agent called Suzy Lamplugh had gone to show a mystery client around an unoccupied house. She was never seen again.

And I began to wonder what would have happened if I’d turned up alone to do that interview, alone. What was this guy planning to do then?

Shortly afterwards, the death-threat letters began. Whenever my photograph appeared alongside my regular monthly column in the magazine, the letters arrived. Cut out of newspaper like a ransom note, calling me female filth, scum, telling me my days were numbered.

Telling me they knew where I lived.

The police never pinned down who was sending them, and eventually they petered out without my poisoned-pen pal ever making good on his – or her – threats.

But it made me careful, wary. I had a mobile phone long before it was the norm, so I couldn’t be tracked via my land-line number to the village where I was living at the time. I opened up a PO Box address in the nearest large town, so I could receive mail without it coming to my home address, and printed only that and the mobile on my business cards.

And, of course, I learned a LOT of self-defence. 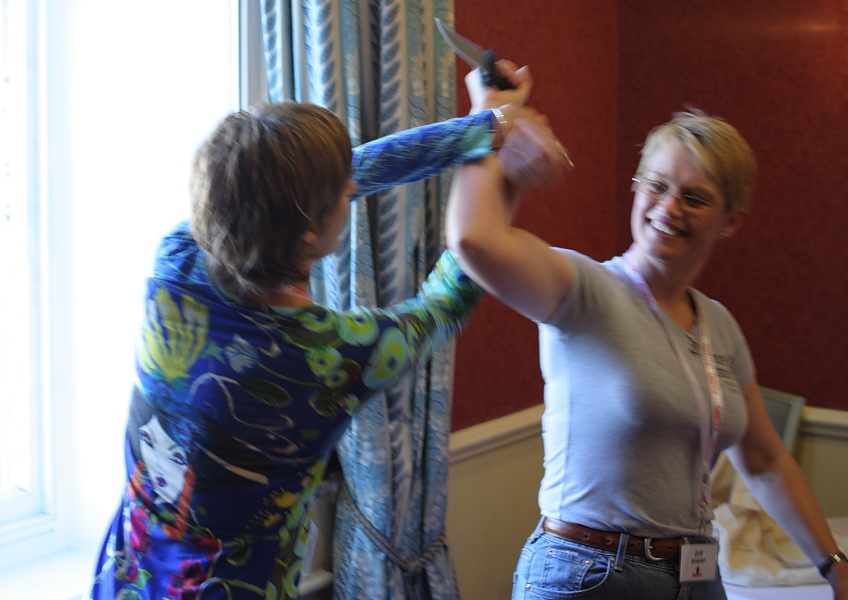 I was reminded of this when I was at the CrimeFest convention in Bristol last weekend, because I did a short self-defence demonstration for one of the In The Spotlight slots on Saturday morning. Aussie author Helen Fitzgerald ably volunteered to be my crash-test dummy, and together we showed the standing-room only audience how to avoid being stabbed or strangled.

But the best form of self-defence, I told the crowd, was not to be there in the first place. Not to put yourself in a position where you needed it.

Not to have your home telephone number published in a magazine.

But how do you explain all this to someone for whom it’s no more than a little slip-up that will be forgotten by lunchtime, and not carried home with them at the end of the day?

So, am I overreacting? Have you ever had a minor incident that shook you up even though, technically, nothing happened? Or do you see people taking risks with their personal safety, oblivious?

What makes you angry in a small way?

This week’s Word of the Week is chapfallen (or chopfallen), which means ‘dropped jaw’ from chap or chop (jaw or jowls), hence depressed, crestfallen, dispirited. It dates back to the 16th century; today we associate jaw-dropping with surprise rather than sadness.

54 thoughts on “Cross Enough To Spit”