If it’s May, then for crime fans in the UK, it’s time for CrimeFest in Bristol. 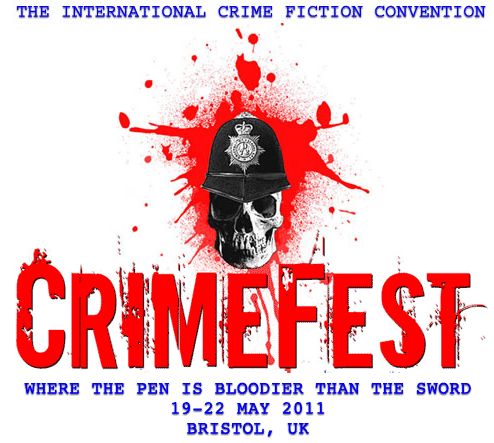 CrimeFest began with Left Coast Crime, which was held at the same venue, the Bristol Marriott, in 2006. (Well, Bristol is sort of the left coast of the UK, if you squint a bit…) The organisers, Adrian Muller and Myles Allfrey, had a sudden rush of blood to the head and decided to keep going. CrimeFest in 2008 was the result, and next year will be the event’s fifth birthday. 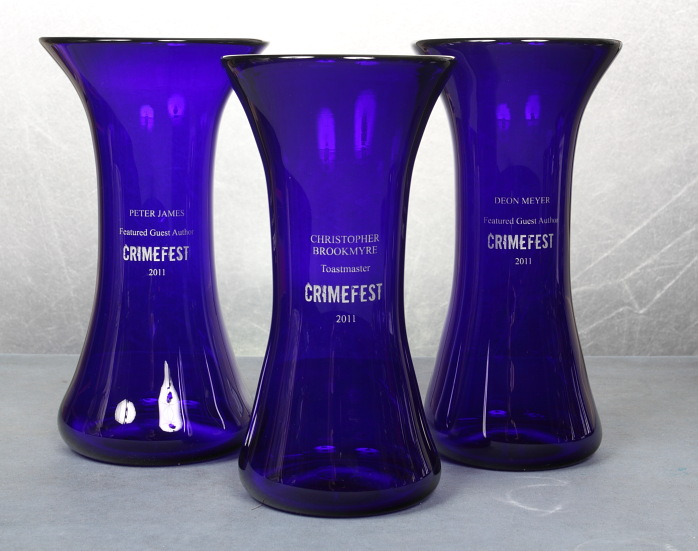 One of the highlights of CrimeFest is the gala dinner on the Saturday night. Not because I particularly enjoy such rubber chicken-type formal meals, but because Adrian and Myles always manage to rope in a highly entertaining Toastmaster for the evening. Last time it was Gyles Brandreth, who is a far funnier man live than any of his television performances ever led me to believe. (That’s not supposed to damn with faint praise, by the way – he was an absolute riot as Toastmaster.) 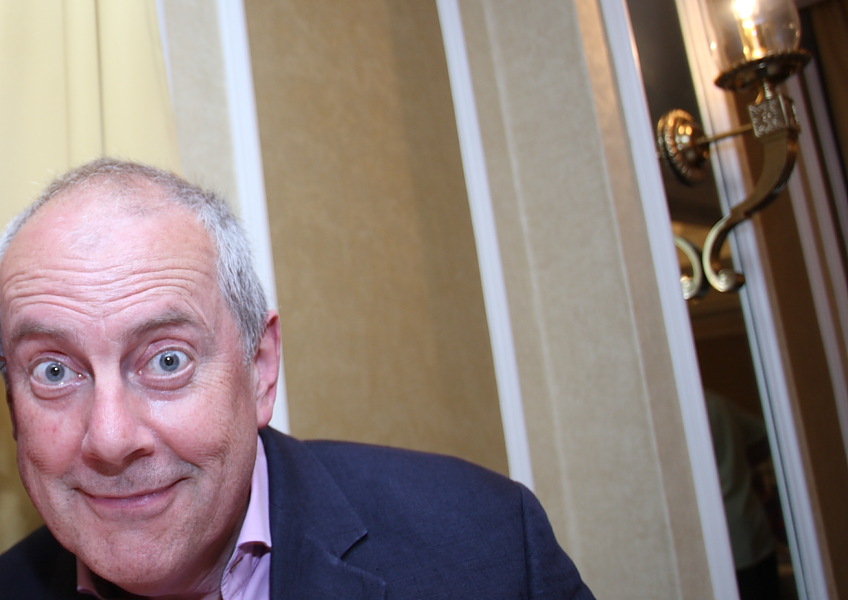 For this year it was originally going to be Don Winslow – one of my favourite authors – but when he was unable to attend, Christopher Brookmyre ably stepped up to the mic. This should give you an idea of how seriously he took the role. 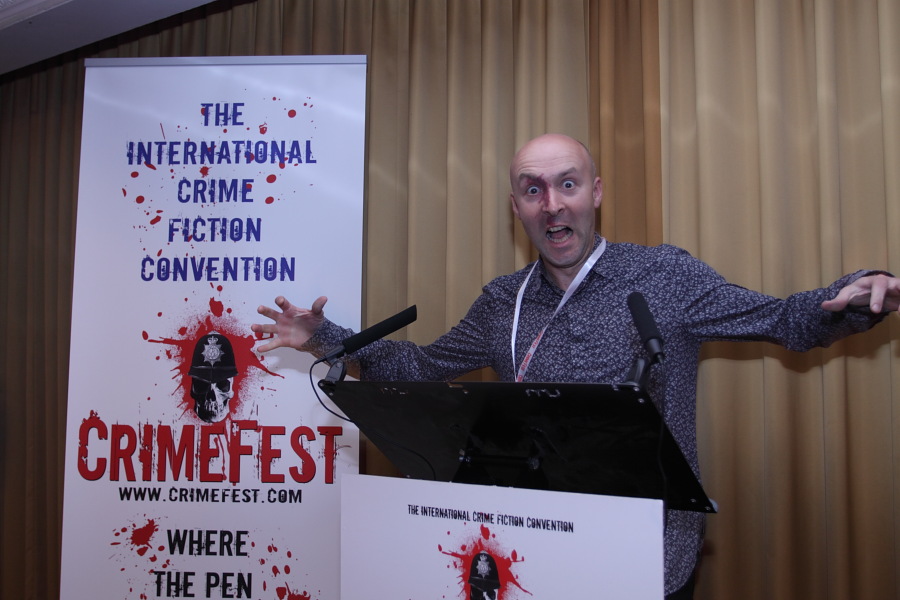 I’ve been a fan of Chris Brookmyre for a while now, and even if you’re unaware of his work, his titles should hook you right in:

A TALE ETCHED IN BLOOD AND HARD BLACK PENCIL

ATTACK OF THE UNSINKABLE RUBBER DUCKS

ALL FUN AND GAMES UNTIL SOMBODY LOSES AN EYE

A BIG BOY DID IT AND RAN AWAY

I mean, come on! How can you not love those? 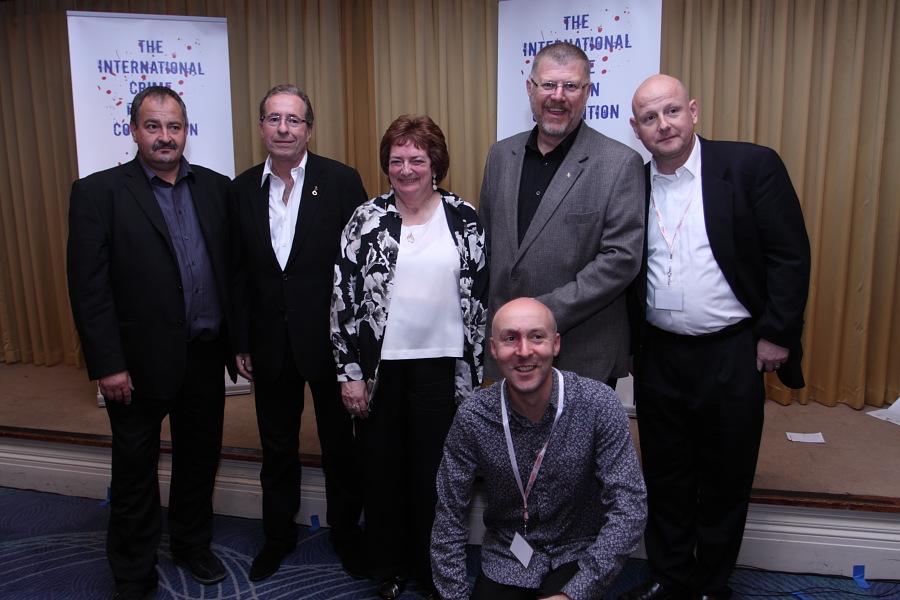 Lindsey Davis was the recipient of this year’s CWA Cartier Diamond Dagger which made an appearance on the night, with Myles doing his burly security man bit. Not surprising – the diamond-encrusted dagger must be worth more than half the attending authors earn in a lifetime. 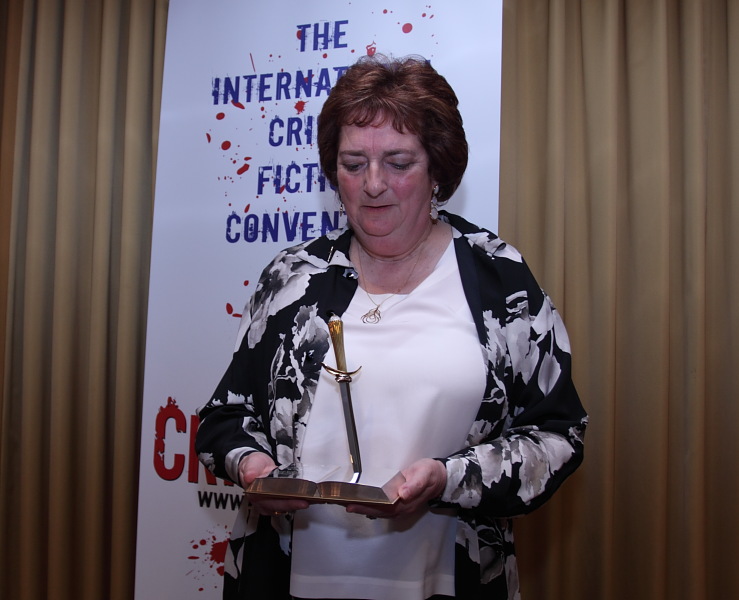 Of course, even if you didn’t fancy the gala dinner, there were plenty of very interesting panels running from Thursday to Sunday, put together by the incredibly hard-working Donna Moore. 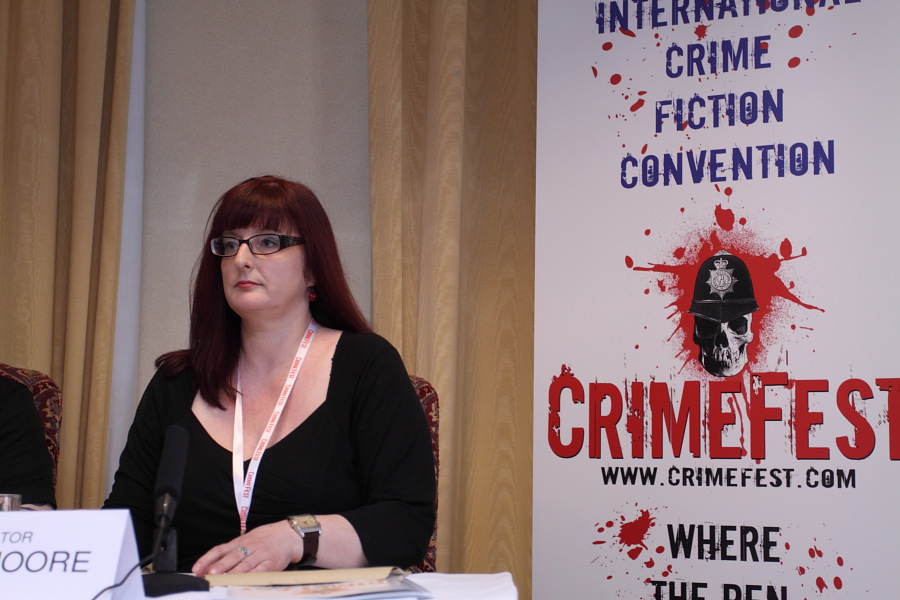 My first one was on Thurs afternoon, when I was tasked with keeping Paul Johnston, Last Laugh Award-winning LC Tyler, Christopher Wakling and Anne Zouroudi in line while we discussed ‘Bringing Up Baby: Creating Believable Sleuths’.

As moderator, I asked each of them to come up with a brief intro that included one blatant untruth. This was to see just how believable they could be when making stuff up. Excellent, as it turned out. So convincing were they as liars that nobody in the audience actually got all four answers correct. In fact, only three people managed three out of four, so we picked a winner from those entries. Honestly, would you buy a second-hand car from any of this lot? 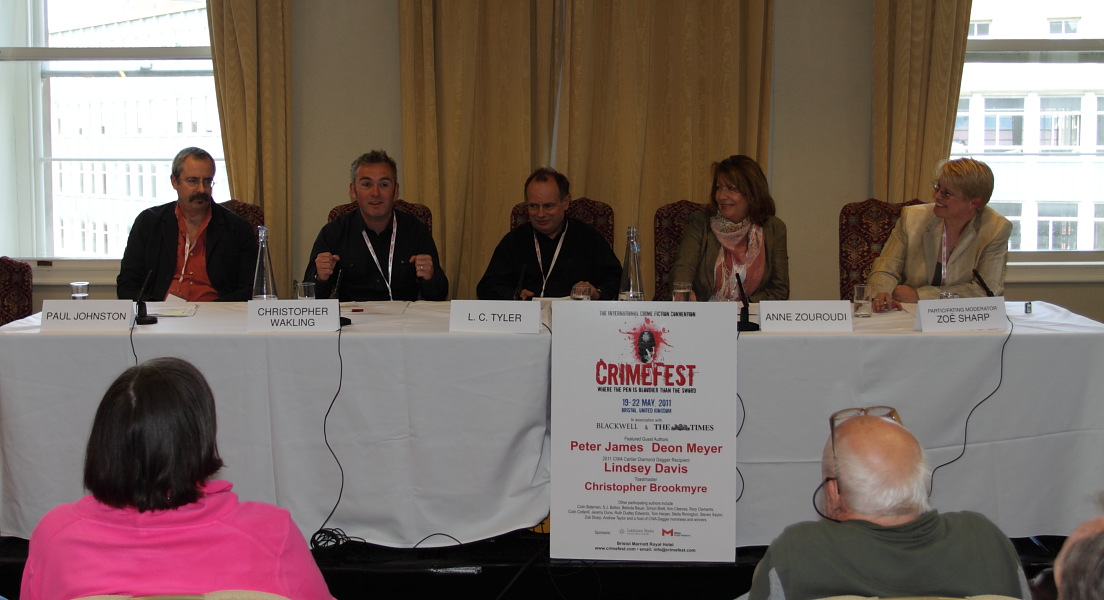 And just in case you were wondering how you might have done, here are their intros. I’ll tell you the answers later, and there’ll be a copy of the latest Charlie Fox paperback, FOURTH DAY, to the winner:

Paul Johnston: ‘I’m Paul Johnston. My twelfth novel, THE NAMELESS DEAD, has just been published. I’ve been fortunate enough to win a literary and literally lethal dagger and an engraved piece of plastic for my fiction. I spend most of my time in Greece, was at school with Gordon Brown, lived on a small island for six years, and have chaired over 300 authors at book festivals. Oh, and I’m frightened of Zoë Sharp.

LC Tyler: ‘LC Tyler is the author of four Ethelred and Elsie “Herring” mysteries, the latest of which is HERRING ON THE NILE. He is now a full-time writer but has done all sorts of other things in the past.  Growing up in Southend he had holiday jobs selling ice-cream, working at Southend Airport and clearing mines from the beach. More recently he has been employed as a systems analyst, a cultural attaché and as Chief Executive of a medical royal college. He is an honorary paediatrician.’

Chris Wakling: ‘Christopher Wakling worked as a litigation lawyer before turning to writing full time ten years ago. He can fly a plane, surf small waves standing up, and walk on his hands. THE DEVIL’S MASK is his fifth novel.’

Anne Zouroudi: ‘Anne Zouroudi was led into writing her series of novels featuring Hermes Diaktoros, the Greek Detective, after abandoning a lucrative career – which included a spell working on Wall Street – to become a fisherman’s wife on a tiny island in southern Greece.

‘Like many authors, she’s held down some interesting jobs to fund the writing habit, including donning a butcher’s apron to sell pork pies and sausages, playing a begowned extra in a BBC production of Jane Eyre, and picking mutant jelly babies from a conveyor belt in a sweet factory.’

The Friday night CrimeFest quiz, which took place across the road from the convention hotel in the Green House bar, was a disappointment from our point of view. Our makeshift team were aiming firmly for last place, but were nudged off bottom spot by a team who remarkably knew even fewer of the answers than we did. Over the last few years we have telegraphed our complete lack of general crime-related knowledge by our choice of team names – Northern Rock (a UK bank that took a spectacular nosedive), MPs on Expenses, BP Complaints’ Department, and this year’s effort, The IMF Equality Commission. As you can imagine, we were gutted by this result, and are determined to train less in order to avoid a repetition next time. Or, better still, we may retire altogether and allow someone else to hog the inglory of the lower end of the order ;-]

I was particularly looking forward to my Saturday panel – ‘The Grass Is Greener: Thrillers – UK vs US’ – for various reasons, not least of which was that I was not moderating it, so basically all I had to do was turn up! I was sitting alongside fellow Best British Barry Award nominee Charlie Charters, as well as Steel Dagger-winning Simon Conway, and Matt Hilton. Nick Sayers, publisher from Hodder & Stoughton, had the dubious honour of moderating proceedings, although his opening gambit of announcing that three out of the four authors on the panel were published by Hodder, so he felt he could control them, was a temptation to misbehave that I almost couldn’t resist … 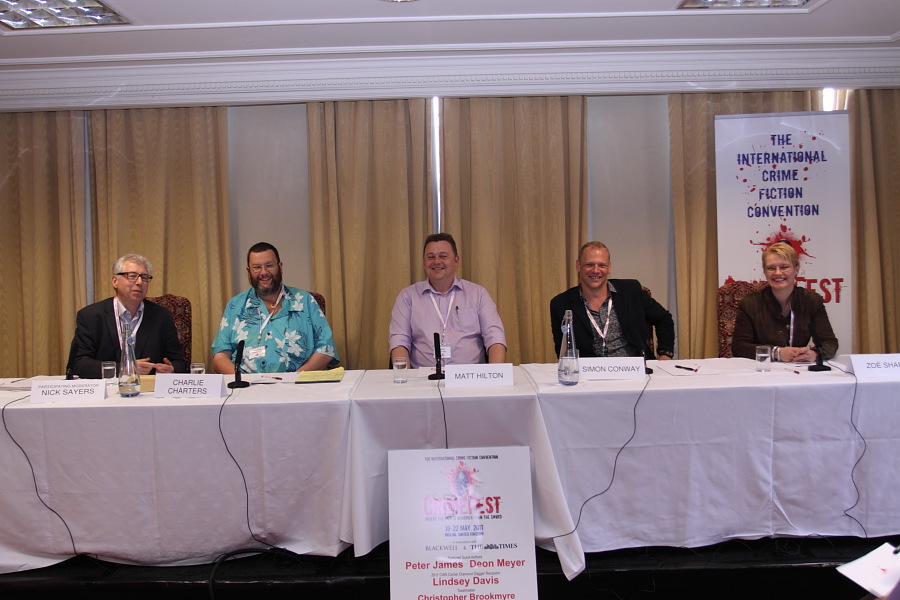 I admit that I’m never sure how serious to be on such occasions, and I tend to go for the entertainment as much as the enlightenment angle. Do you have any preferences, either when you’re watching a panel, or taking part?

Of course, one of the reasons I like going to events like CrimeFest is it’s an excuse to drag out a frock and a pair of legs, not to mention other bits of me, and get poshed up. Anybody who thinks writers lead a glamorous life has never seen us answering the door to the postman at lunchtime in our jim-jams. So, it was nice to have the opportunity for ‘stunt dressing’. Was it our Alex who coined that term – great one. 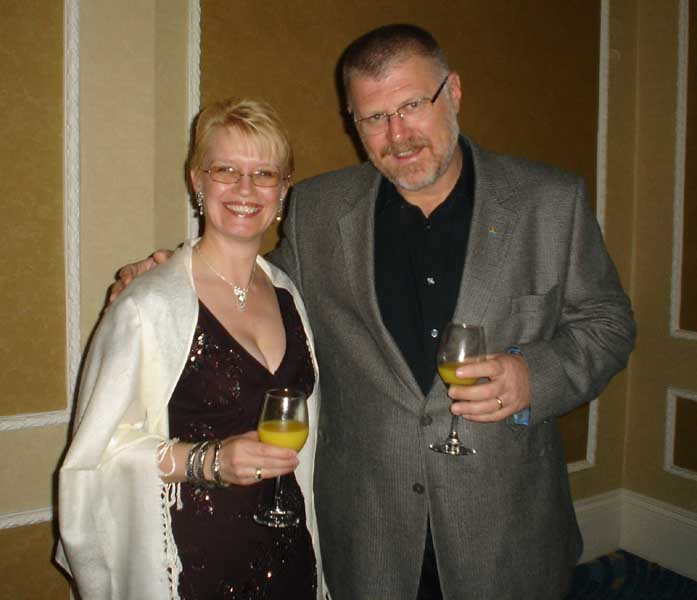 As always, we came home having spent the weekend talking our heads off to friends both old and new. Apart from the odd bombast in the bar, it was a great chance to catch up and recharge the creative batteries, even if we did need a lie-in on Monday morning …

So, ‘Rati, a few questions for you this week. What’s the best panel discussion you’ve seen at a convention? What’s the worst and why? (You don’t have to name names if you don’t want to.) And can you spot the lies my Believable Sleuths told?

This week’s Word of the Week is jugulate, which actually means to cut the throat of, or to check a disease or similar by drastic means.

And just to leave you groaning, how do you kill a circus performer?

Go for the juggler …