I was intending to write my blog this week about going to the Bouchercon World Mystery Convention in St Louis, but in thinking about the whole trip the theme of it gradually developed into something else.

An exploration of courage and fear.

That might seem like quite a leap, from a convivial gathering of authors to questioning what scares the bejaysus out of you, and how you get past that feeling, but it kept coming up.

Our first morning in Chicago, Andy and I, and fellow Brit author Anne Zouroudi went up what used to be the Sears Tower but is now the Willis Tower, to the observation Skydeck on the 103rd floor. Since the last time we went up to the Skydeck, they’ve built four glass boxes that extend four feet out from the side of the building and allow you to step out onto nothing and look straight down to the tiny toy cars and people in the street below. 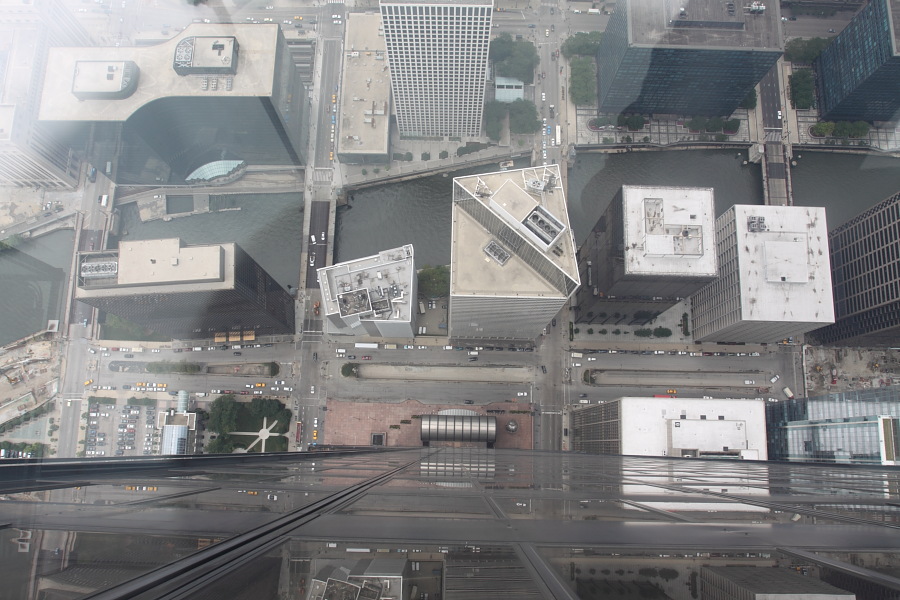 After the initial leap of faith, as it were, it didn’t bother me. And especially once you put a camera in my hands. Somehow, the act of taking pictures steps you outside what’s happening, makes it not hard to understand how war photographers and camera operators put themselves in danger. As soon as you look through the lens, you’re somehow disconnected from what’s happening through the viewfinder. 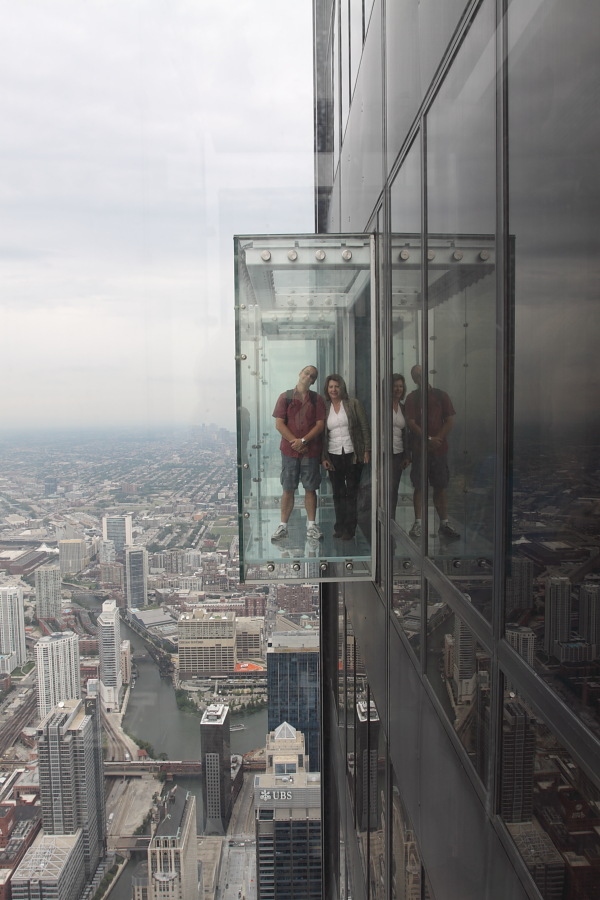 After this we rewarded ourselves with a Food Tasting & Cultural Walking Tour of Chicago’s Bucktown and Wicker Park districts, once fairly infamous neighbourhoods but now gentrifying rapidly, although there was still some very entertaining lawn art to be found. 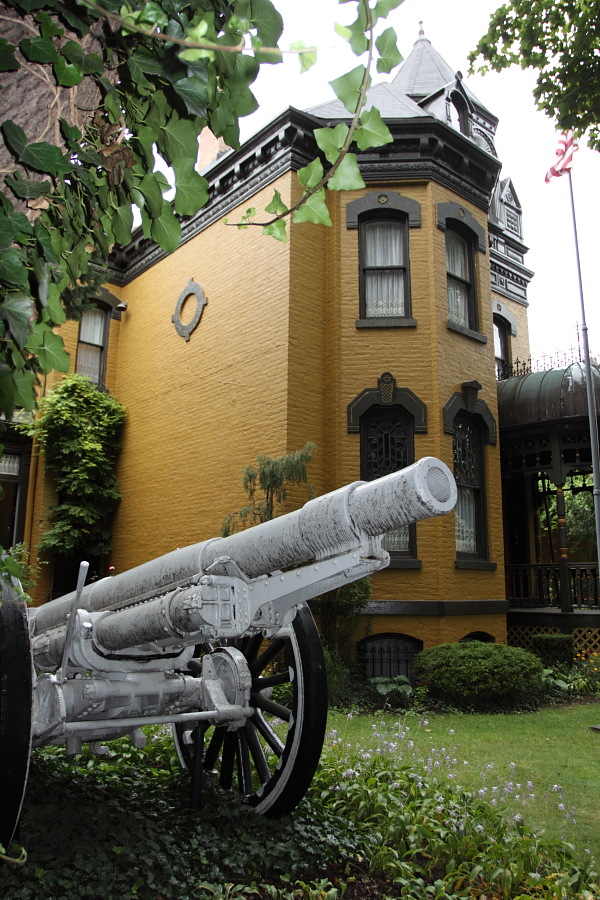 As well as gorgeous food, it was a wonderful way to see some of the architecture of the area. And because the culture was slipped in amid the culinary treats, we swallowed it all just as eagerly. Plenty of lessons on how to painlessly include backstory to be absorbed there . . .

Anyway, we started off at George’s Hot Dogs for authentic Chicago hot dogs – no ketchup, if you please: 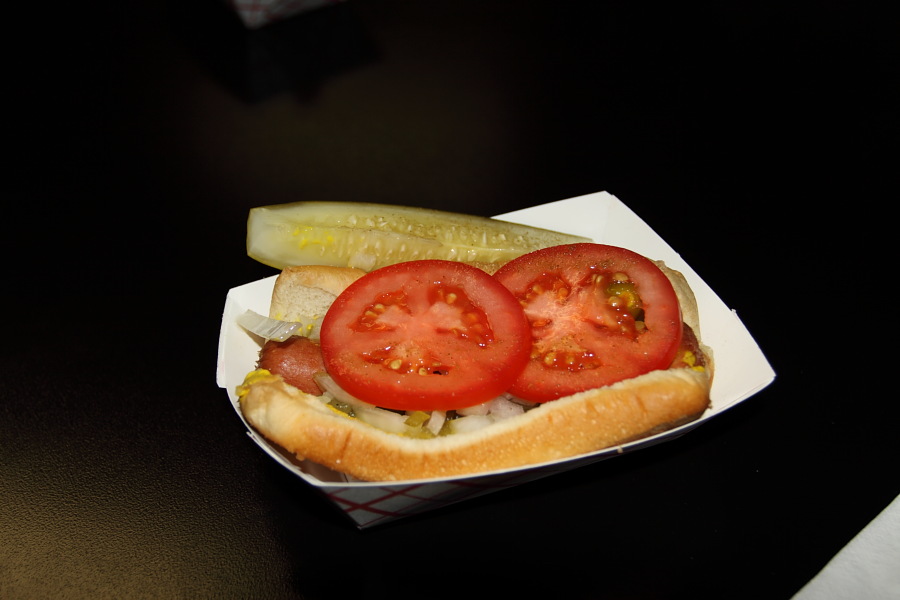 Then to Hot Chocolate for the most superb hot chocolate drink I’ve ever tasted, plus homemade marshmallow: 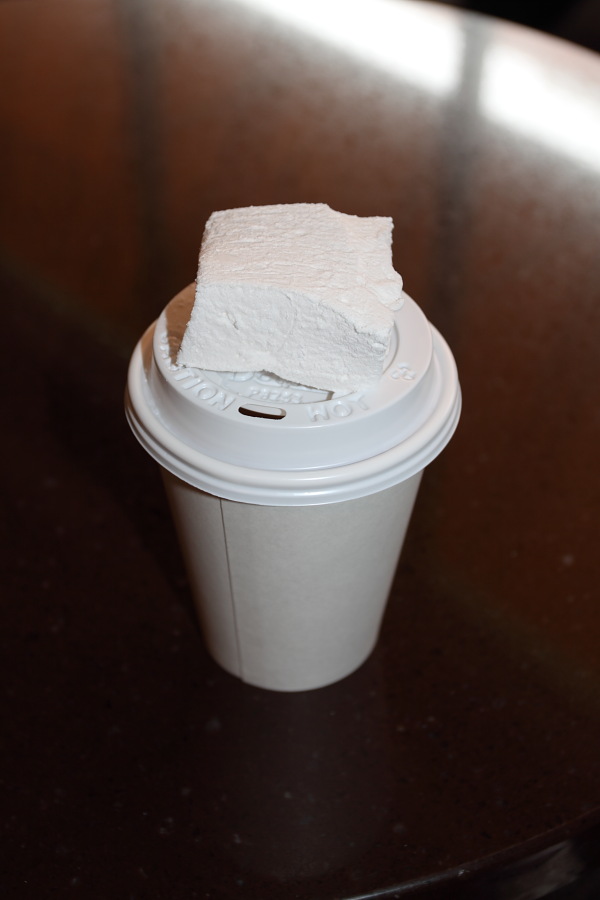 Not to mention the cakes on offer at The Goddess & Grocer. 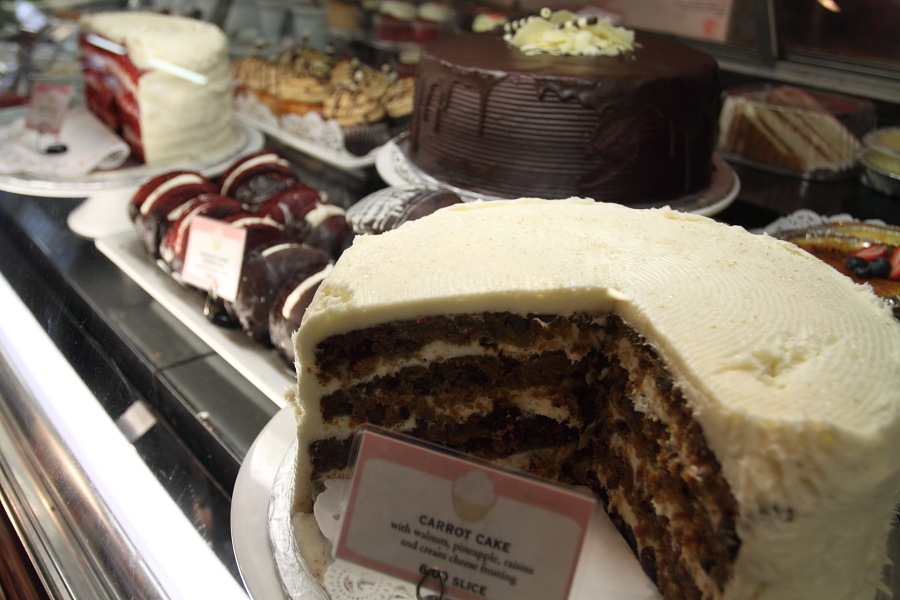 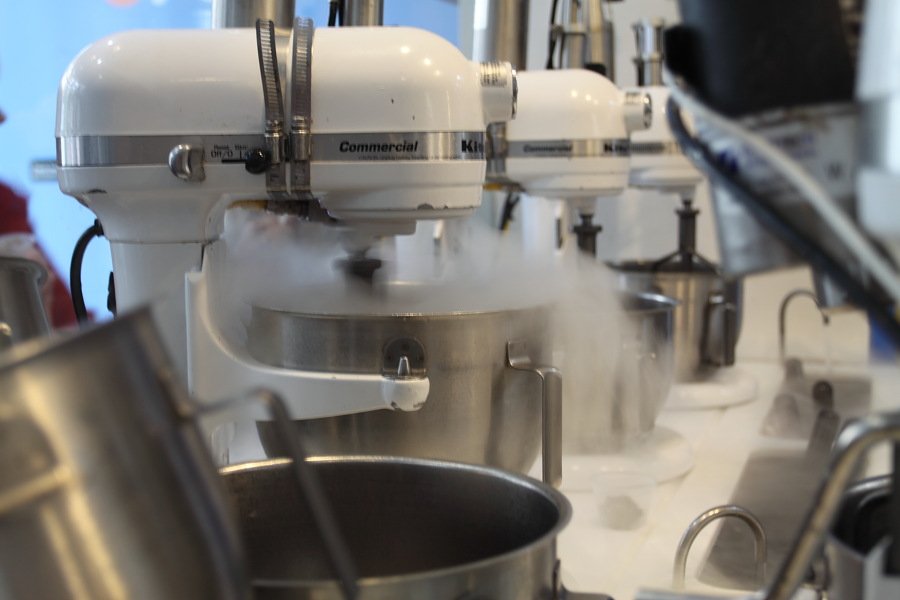 That makes it sound as if there was no savoury element to the tour, but that wasn’t the case. We also took in the Piece Pizzeria and Brewery, and the Sultan’s Market Middle-Eastern Deli and Store, but I was much too busy eating to take pictures at this point.

But I digress. On the Wednesday evening, I took part in an event at Lisle Library in Chicago, hosted by the delightful Patti Ruocco. As well as the usual talk and Q&A, Patti also asked me to do a self-defence demonstration, for which she kindly provided some plastic training daggers. As we were flying out to the States the day after the tenth anniversary of 9/11, I decided that trying to bring my usual rubber knife through Customs might not go down too well. 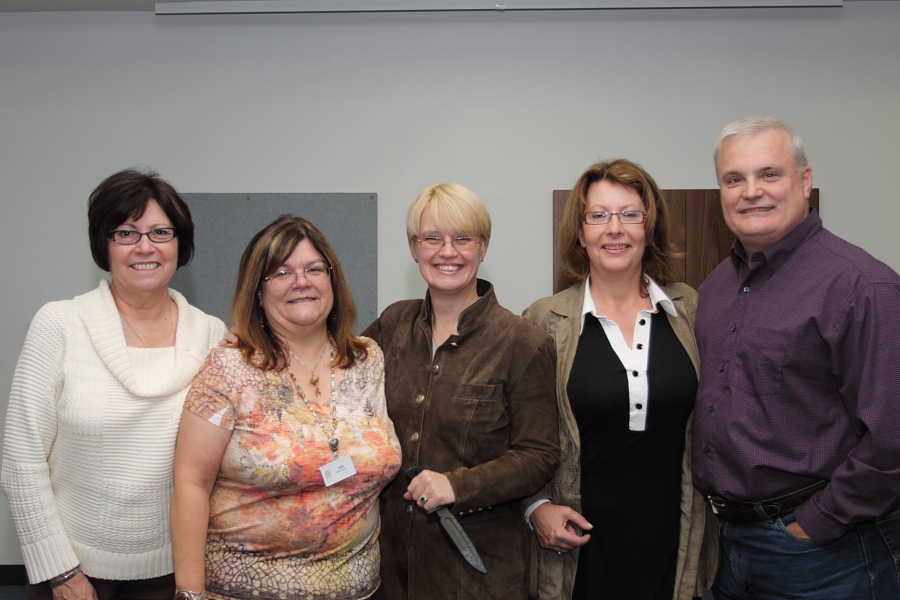 Anne very kindly volunteered to be my Crash-Test Dummy for the evening, and we went through a few knife defences and escapes from strangleholds. And again we are back to fear, and how to avoid being paralysed by it so that you are unable to act, unable to defend yourself with any degree of success. Even against a cake with attitude: 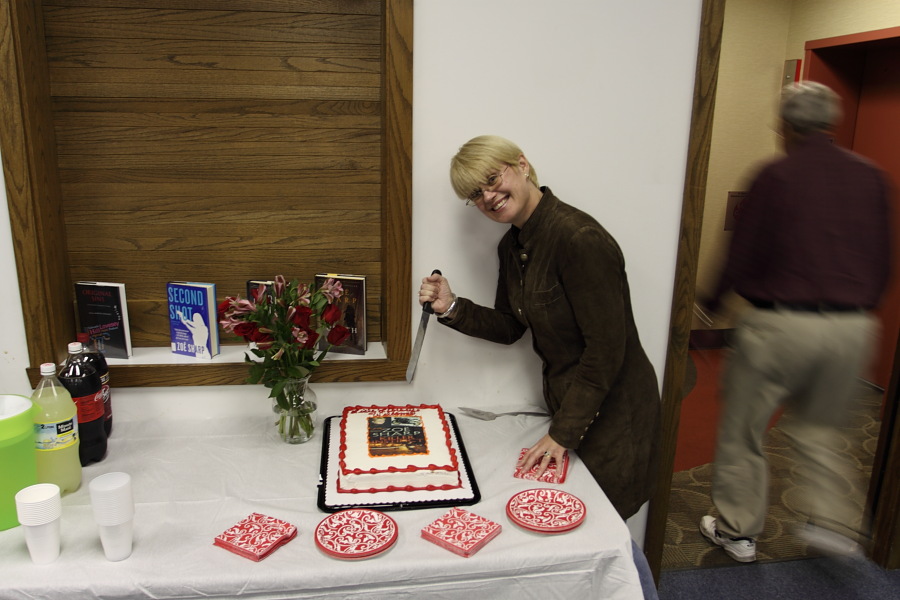 Then it was on to Bouchercon, via a brief stop in the wonderfully named Normal, Illinois, for breakfast at a traditional Mom & Pop diner – Uncle Tom’s Pancake House & Restaurant: 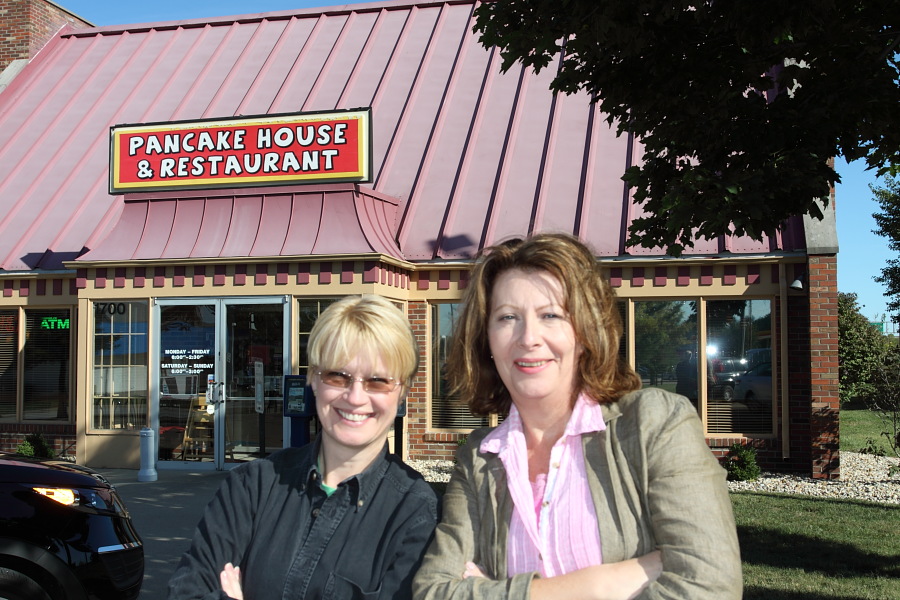 Of course, some people find the prospect of appearing on panels at such an event absolutely terrifying. It makes them physically sick. The only thing that’s ever bothered me is the possibility of nobody turning up. And as soon as I know we have an audience, I’m fine. Having a signing line is even better, because somehow that means that whatever I said on the panel did not completely alienate my potential readers! 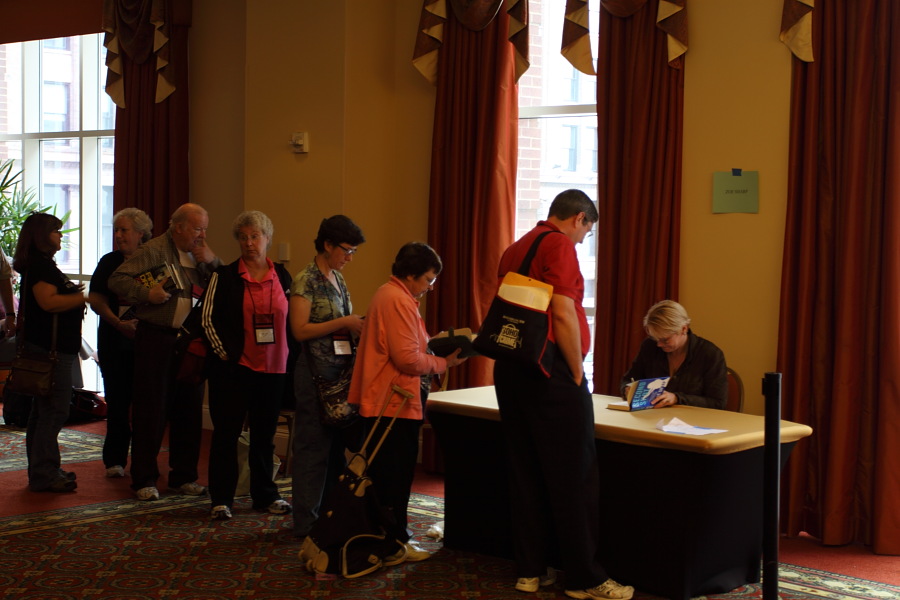 It’s been a couple of years since I was last at Bouchercon, and it’s only when you go back that you realise what you’ve missed. It was just so nice to bump into friends, old and new, to sit and chat about books and writing and the business itself. I never fail to come back from B’con raring to get on with the latest project, and this was no exception.

But there is always a certain amount of fear underlying the work. Is it good enough? Will people ‘get’ it? Will they either love it or hate it, or will it just be yet another ‘OK’ read. Fear of failure seems to be a motivator with every writers, published or unpublished. And the few that don’t appear to suffer from any kind of self-doubt? Well, maybe they should . . .

For us, though, a visit to the States is never complete without firearms. I’d put a ‘Have breakfast and go to the gun range with Zoë Sharp’ lot into the charity auction, so we went to check out Top Gun Shooting Sports in nearby Arnold, Missouri. We took Anne with us, as well as other Brit virgin shooters Russel D McLean and Chris Ewan, plus Bouchercon Albany (2013) organiser Al Abramson,  Blake Crouch, and his cover designer, Jeroen Ten Berge.

Without naming names, not everyone was as happy about getting up close and personal with genuine firearms as perhaps they thought they might be, while others grew horns and came out with big grins on their faces. It’s one case where a healthy fear and respect for what you’re doing is definitely a Good Thing. 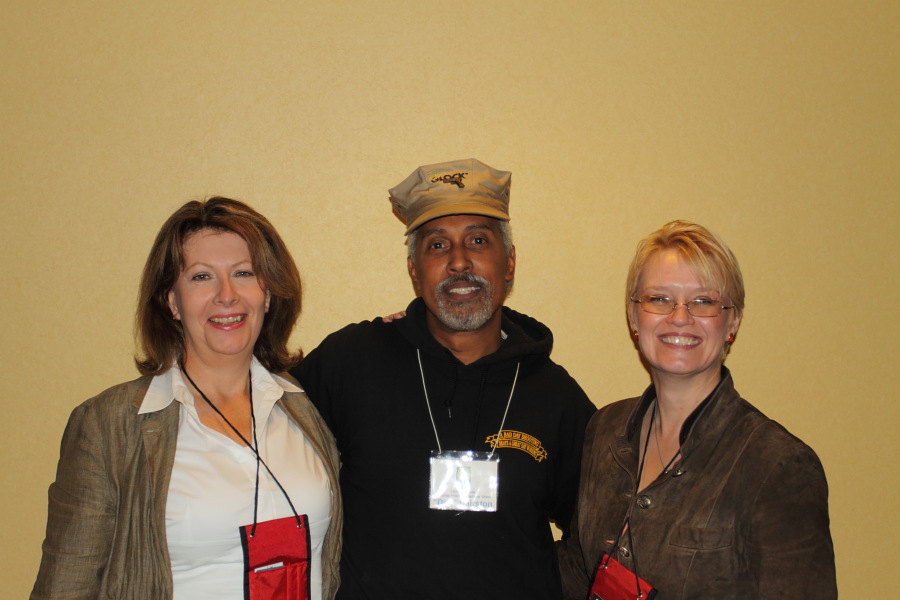 For those who were unable to get to the range, Beth Tindall from Cincinnati Media had contacted a friend, Arbon ‘Doc’ Hairston of Fair Warning Systems, who runs firearms training simulators for law enforcement. Doc brought along various semiautomatics, revolvers, and even a pump action shotgun, along with training simulations that he uses to teach people when to shoot and when not to shoot. The guns are real, but hooked up to CO2 to work the action and provide a certain amount of recoil. A lot of fun was had by all who had a go, but somehow the fear factor was missing. Not difficult to see how kids brought up on video games have lost any respect they might have had for the dangers of real weapons.

In the charity auction, Brit crime fan Lesley ‘Mitchy’ Keech was the winning bidder, and as she wanted to attend the Bouchercon Sunday brunch, we arranged to take her for breakfast and to the gun range on the Monday morning after it was all over. 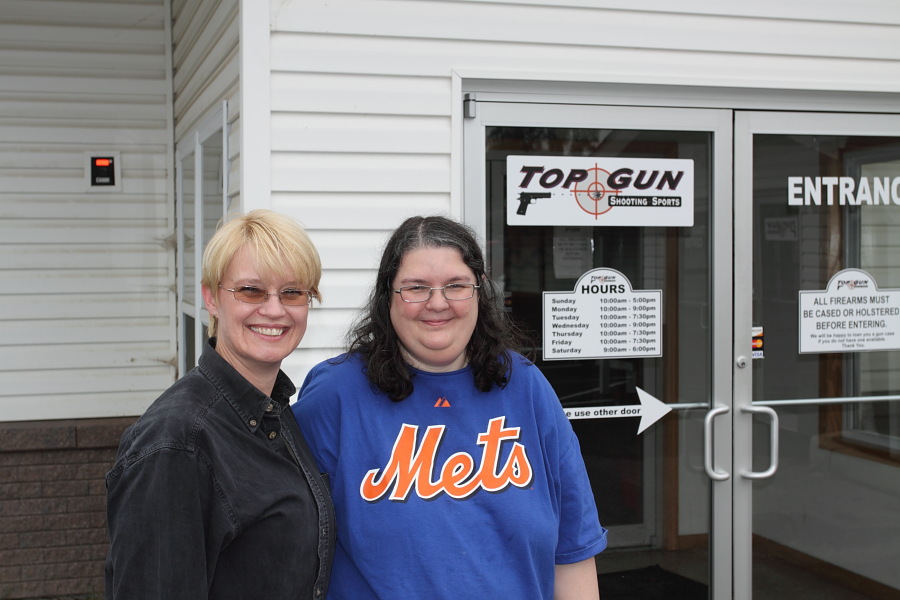 We also took fellow Brit thriller writer Matt Hilton with us. He agreed that, after firing the simulator, firing the real thing was a whole different ball game. 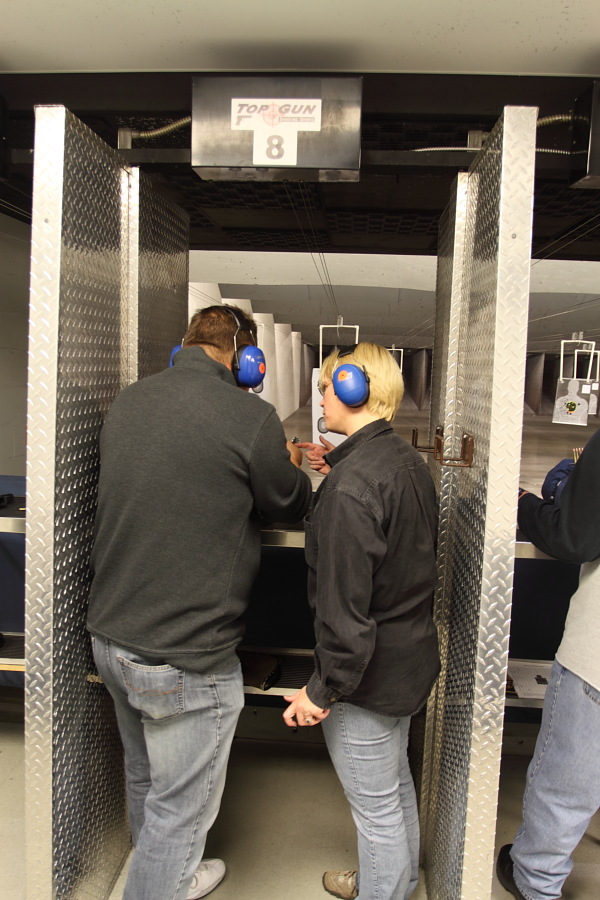 I tried to instil the basics of gun safety into Mitchy, starting off with only one live round in the chamber so she could get used to the feel and the noise of it, and giving her a good solid stance to shoot from. We let her try various SIG, Glock and Smith & Wesson 9mm semiautomatics, and also a couple of .357 magnum S&W revolvers. And finally they brought out an MP5 submachine gun, and she put a full clip through that, beginning on single shot and moving up to full auto. Those targets were definitely not getting up again! 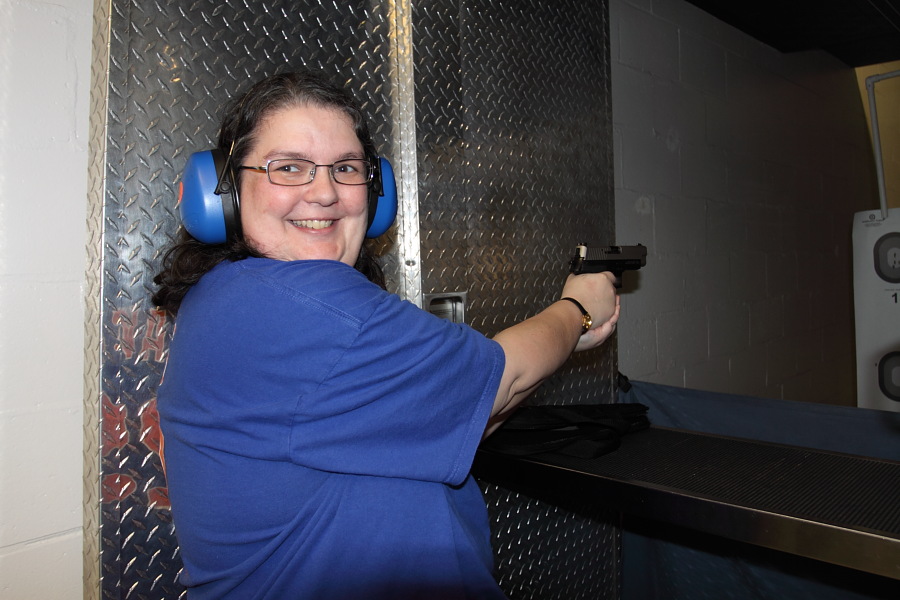 I hope we made the experience fun without causing too much fear beyond just the right amount. After all, without the rush of endorphins (endogenous morphine) released by the pituitary gland and hypothalamus during periods of excitement, stress, or danger, how do we know we’re really alive? 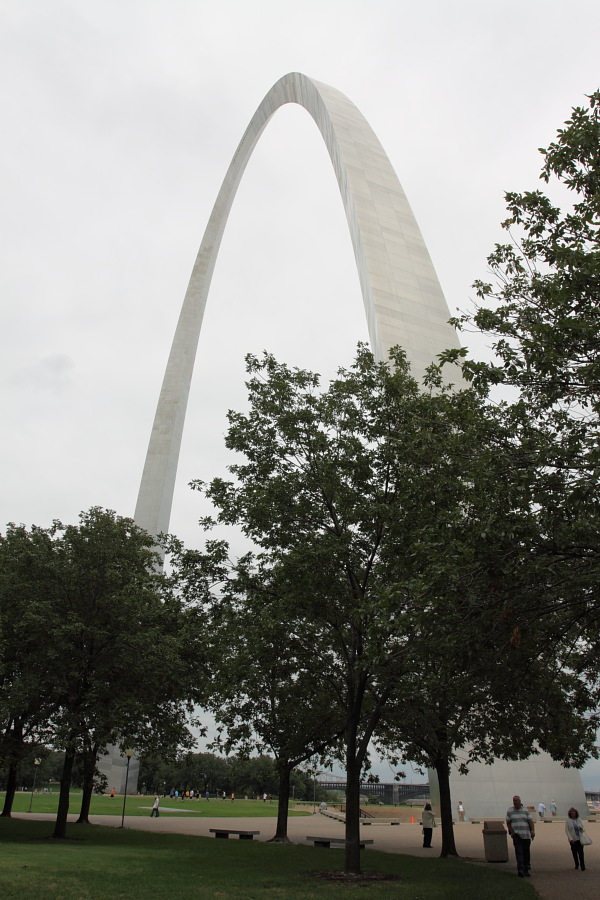 On the Monday afternoon, we went up the Gateway to the West – the St Louis arch. An amazing feat of engineering, with an ingenious elevator system to get you to the cramped viewing area right at the peak of the arch. And as we rode up there, I could only think of all the people we knew who would completely freak out at the experience, first of the confined space, and then being over 600 feet off the ground. 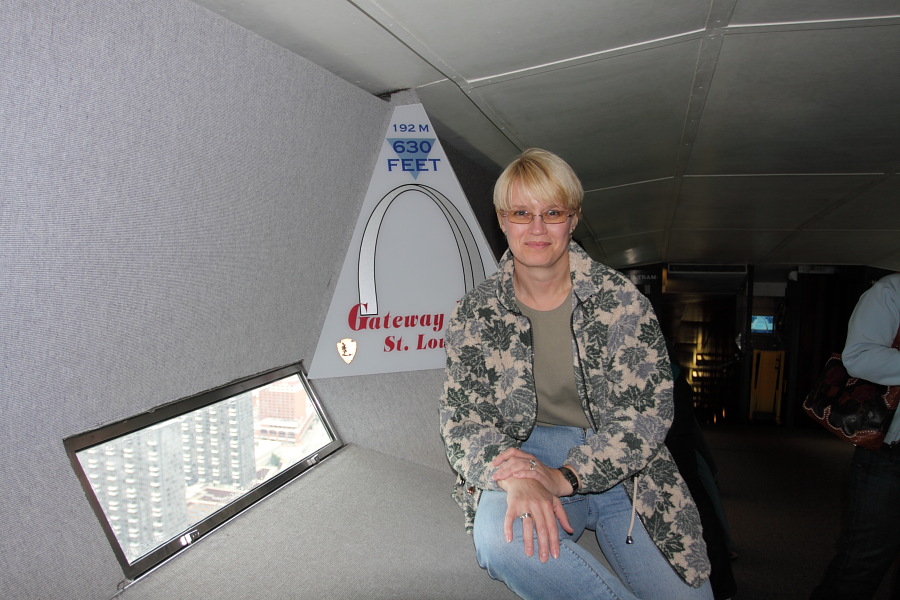 But if something doesn’t particularly scare you, then doing it involves no courage. Or does it?

So, ‘Rati, if you went to Bouchercon, did you have a great time? Did you go up the arch?

And what was the last thing you did that really scared you?

For me, the answer to the first question is, “Hell, yes!” 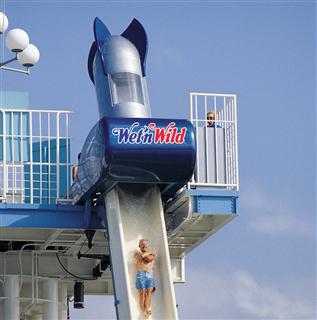 And the answer to the second is going on the Bomb Bay water ride at Wet ‘n’ Wild in Orlando Florida a few years ago. (And I’m talking squeal-like-a-girl-scared here.) You climb about eight storeys up, stand in a cylinder shaped like a cartoon bomb, which they winch out over a narrow chute filled with running water. They leave you there for an agonising few seconds, then a floor drops away and you PLUMMET down the chute until it levels out at the bottom and the force of the water being squeezed into places you don’t even want to think about, brings you to a stop.

This week’s Word of the Week is horripilation, which means a contraction of the cutaneous muscles causing erection of the hairs and gooseflesh. The correct word for when all your hair stands on end. From the Latin horrere to bristle, and pilus, a hair.

One last thing. While we were away, my Twitter account was hacked, so please be careful about following any dodgy links that don’t obviously come from me. We also had problems logging on to Gmail, as it didn’t like the fact we weren’t at our home computer. So, apologies for any delays or confusion.

31 thoughts on “Courage and Fear”