Cara Black is the author of the Aimee Leduc mysteries, each set in a different arrondissement of Paris.

Her latest, Murder at the Lanterne Rouge, is set in one of the French capital’s four Chinatowns.

The book, the twelfth in this stellar series, is due in stores on March 6th, or you can order it here. 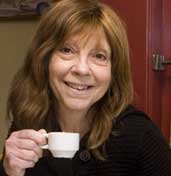 I met Cara when my first novel came out. We were doing an event together, and I remember her telling the crowd that her books were set in Paris, and that she traveled there at least once a year for reseach.

I, on the other hand, had just written a book that took place in a barren stretch of California flatland known for meth and rednecks. I thought: Wow, she’s got this gig figured out WAY better than I do.

Cara seems to gain not just a broader readership with each book but ever more extravagant praise. her latest, Murder at the Lanterne Rouge, earned a starred review from Publishers Weekly:

“Outstanding…. Readers will relish realistic villains and an evocative atmosphere that begs for a trip to the City of Lights.”

“The pace accelerates as fast as Aimee’s Vespa. The details of the series, Aimee’s love of vintage couture, her love life, and the specter of her mother’s disappearance, all make welcome appearances here. Murder at the Lanterne Rouge is wonderfully plotted, and Cara Black ties together the past and present with élan.”

Cara has graciously agreed to join us here as she prepares to launch her new tour, indulging a few questions about her latest:

1)  Aimee’s reached the twelfth offering in the series: Murder at the Lanterne Rouge. Where in Aimee’s life do we find her now? What changes have occurred over the course of the series—is she sadder but wiser, stronger because of all the things that haven’t killed her, resigned to the tedious routine of a ho-hum life in Paris?

It’s January 1998, a little over four years into the series (we first met Aimée in November 1993). There’s snow on the ground, and she’s broken her rule about dating ‘men in the police force’ and is in a relationship with Melac, a Brigade Criminelle officer with a lot of family baggage. Something inside Aimée thinks he might be ‘the one’ until he’s summoned to undercover surveillance in a new clandestine position and he can’t reveal anythng about his new caseload.

Par for the course, she thinks, wondering why she thought Melac could be different from any other ‘flic’ like her father. She’s resigned, yes, but a little wiser too, especially about danger after her last case. She’s now resolved to focus on building her business, and Leduc Detective Agency continues with its bread-and-butter computer security contracts.

But now her partner René, a dwarf, normally the most level-headed, business-minded and cautious of the two, has a coup de foudre—love at first sight—and thinks he’s found his soul mate: Meizi. René’s only known her for two months and she comes from a traditional Chinese family, or so he believes. Then Meizi gets connected to a brutal murder and disappears.  Aimée’s reluctant to investigate—suggesting she’s a bit wiser, perhaps. But given the deep involvement of René, her best friend—who’s heartsick when he discovers Meizi isn’t who she claimed to be—Aimée can’t refuse, and plunges in.

2) Where is the Lanterne Rouge, and how did it come by its name? What arrondissements have you yet to cover? What will you do once you’ve killed somebody off in every single one?

Actually the story takes place in the northern edge of the Marais, in the smallest and oldest of the four Chinatowns in Paris. The Lanterne Rouge refers to an alley where a shrink-wrapped body is found—but if I tell you anymore, David, I’ll have to kill you.

As for the second half of your question: Twelve arrondissements down, eight more to go. I’ll figure out what to do when I’ve written about all twenty when I get there.

3) Why pick this Chinatown? What makes this one different from the other three Chinatowns in Paris?

My friends live nearby and coming from the Metro I always walked through the area. It intrigued me and I discovered that this warren of several medieval streets is home to inhabitants from Wenzhou, a southern province below Canton, who engage in selling wholesale bags, luggage and costume jewelry. They’re  known as ‘entrepeneurs’ and are quite different from the residents of the other Chinatowns, many of whom are political émigres.

As I walked these narrow fourteenth-century streets I heard the slap of Mah Jong tiles and the pounding of machines from behind closed doors and in the old courtyards. There’s a whole substrata below the surface of sweatshops with illegal immigrants who come to France to work but become almost indentured slaves to pay off their passage. A conversation with a man in the Renseignements Generaux, the RG, which is the domestic intelligence service, really sparked this book after he told me: ‘No one dies in Chinatown.’

4) How did you persuade several law enforcement officers—not to mention a Chinese documentary film maker—to talk to you about the clandestine working conditions and life for most of the inhabitants in Chinatown? How many bottles of wine did it take? Or did you go with pastries this time?

Wine, pastries whatever it takes. Seriously, I was acquainted with this man in the RG for several years after an introduction from a friend. He’d give me fifteen minutes sometimes—he’s a busy person and runs a major department—but when I mentioned how this Chinatown interested me his eyes lit up.

Turns out he’s in charge of collecting information about the quartier—he wouldn’t reveal exactly what that meant, but he was excited with my idea. He encouraged me. I even ran the murder scenario, the motive and the suspects by him to check for plausibility and he gave me a heads up. After that validation he introduced me to the Chinese documentary film maker—one of his sources—who was a great help about the living and working conditions that are below the surface and never seen by tourists or local Parisians. He insists that I keep his name quiet and refer to him only as Monsieur X.

5)  Did you really find the remnants of the Knights Templars tower in a courtyard? And did a Polish workman shoo you out when you went to investigate? And what was a Polish workman doing in Paris?

Yes, the tower remnant survives on rue Charlot in the back of a courtyard which was undergoing renovation when I happened upon it. Very cool. The Polish workcrew—lots of Polish plumbers and construction workers find jobs in Paris because of the EU—wanted to go home after a long day working. The guy who saw me snooping around wanted to go with his buddies after work for a beer and he was irked because I was holding him up.

I came back the next day because I’m that kind of person—anything for a story—and apologized to him. That did the trick—he beamed and let me snoop some more. Can you imagine living in a building with a Templar tower in your courtyard? I had to use it in the story.

6)  How did you find out about the Engineering Grands Écoles with its medieval student hazing practices still in use today? Does that really happen? Are the practices really as severe as you portray in your book?

Those Grands Ecoles hazing practices exist and for my book I even toned them down a bit. My source was a Parisian engineer, a friend of my neighbor, who had attended this school and had first hand experience of the customs—writing Latin verse on small matchsticks, for example; or being rousted from bed at 4 AM then forced to do exercises and chanting until sunrise; or, if he didn’t conform to the rules, put into isolation deep in the bowels of the medieval abbey where the campus is located. He suffered what we’d call abuse and brutality for two years. Yet he hung in there and did graduate.

A lot of the graduates work in the Ministry or are CEO’s, but he’s now ostracized from the ‘old boy’s network.’ He works in Silicon Valley and started several companies—he’s a brilliant man and not only can come up with the concept for a product, but diagram it, issue its plans and build the thing. He credits this to the rigorous standards of the school and its unique education. Today he feels it was worth it.

7)  We see Aimée and her best friend Martine rushing off to the January sales as true fashionistas must. Do you get a product-placement discount from designers you mention in your books?

I wish. Brilliant idea. I could use a Dior pencil skirt and Louboutin heels for my Vespa scooter.

8)  Your books are so rich with the daily culture of Paris, the things that make it come alive as a city for the people who actually live there. But what of the cultural touchstones identifiable to those of us who know Paris only from afar – does Aimee have a favorite French painter, composer or singer, for example? Do you?

The poets Gerard Nerval and Baudelaire

The opera Les Paladins by Rameau

The composer and singer Jacques Prevert and Georges Brassens

The opera Tristan and Isolde

Okay, so Fred Astaire is American* and Tristan and Isolde is by Wagner.

* Turns out Fred Astaire was almost as Teutonic as Wagner: He was born in Omaha with the name Friedrich Emanual Austerlitz, of German and Austrian parents — DC.

Jukebox Hero of the Week: In thinking of my own favorite French musicians, I remembered the group Les Negresses Vertes, a kind of gypsy cabaret punk outfit — half Pogues, half Charles Aznavour — that my late wife Terri and I saw in San Francisco early in our relationship—one of the best live hows I ever attended. Here’s a tune of theirs remixed by Massive Attack (for the original, go here):