After two weeks in New York and a week of late nights working on the copyedits from hell, I’m brain dead. I couldn’t write a coherent blog if I tried. So rather than embarrass myself in cyberspace where my words will stay around forever even if I delete this blog at a later date, I thought you might enjoy pictures of my pets. 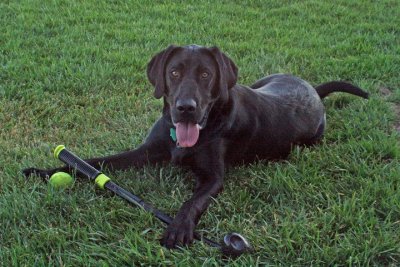 Lewis is an 8-month-old black lab whose owner couldn’t keep him because she was working full-time and going to college, and as we all know, puppies need a lot of attention and supervision. An 8-month-old lab, I’m discovering, is like a toddler. We had to dog-proof the house because Lewis picks up everything in his mouth, including a Lego R2-D2, dirty socks, and doll shoes. The kids have closed off their bedrooms (thank God dogs don’t have thumbs and can’t turn knobs) and so we only have to keep the living areas free of small or precious items.

Lewis is very well-behaved and friendly — and extremely playful. Which is great with you have two acres and five kids, but not-so-great when you’re exhausted. The big plus of having a lab is the short hair (no shedding!); the big negative is the drool.

Nemo has been hiding out in my office all day, and I’m not surprised. He was here first. He saw Lewis through the french doors and every hair on body rose. Between his fear and banishment, he’s pretty damn pissed. We’re introducing the animals tonight (after my daughter’s volleyball tournament.) And we’re getting a trainer. As much for Lewis as for us 🙂

Nemo joined our family last year, as an 8-week-old kitten from the pound. He’s orange and white, which is my favorite coloring for cats. He was so teeny when he came home! Now he’s a big cat.

This is Nemo playing the role of Gulliver Kitty in my Snow Village when he was four months old. 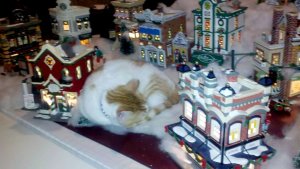 This is Nemo with a stuffer reindeer he purloined from the Christmas box. 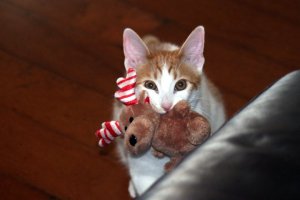 Nemo in the sink (this was taken in April. He’s bigger now, but cats bend pretty easy and he still fits. Though he fills it up now … ) 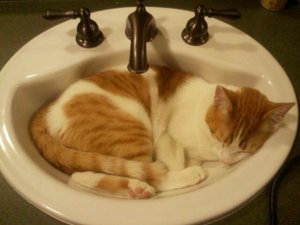 Last month, I heard this low motor in my office, and realized that Nemo was snoring. He didn’t even wake up when the camera flashed. 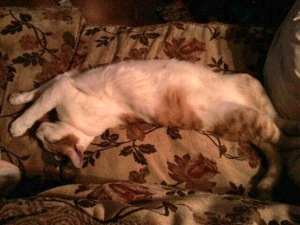 I never thought I’d like chickens–other than baked, fried, or grilled–but these two hens have grown on me and it’s nice to never have to buy eggs from the store. Except–considering how much they eat, the coop we bought, and the fence my husband built to protect them from those higher in the food chain–our eggs are probably costing us $50 a dozen. 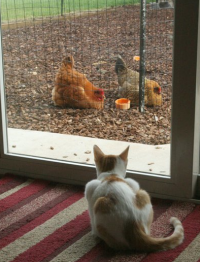 Meet Daisy and Nugget. Nemo likes to watch them. We’ve told him they’re not his chickens; he doesn’t think it’s fair we don’t share.

Chickens actually make fun pets. They’re tame, we can pick them up, they look hilarious when they run, and they put themselves to bed every night. We let them roam our yard (we live in the country on 2 acres) until we brought home Lewis. Now they’re behind a new fence (not the one you see here.) Here they were eating squash. They also love cucumbers, watermelon, and raisins.

After all this, I don’t know what I’m going to do if we ever go on vacation! Well, my kids have enough friends, I’m sure we’ll find someone to house sit. Our pets tend to be very spoiled.

And because I called this post “Children & Pets” I have one more picture for your enjoyment, taken nearly three years ago when my sons were 7 and 4. Right after we bought a new, front-loading washing machine … 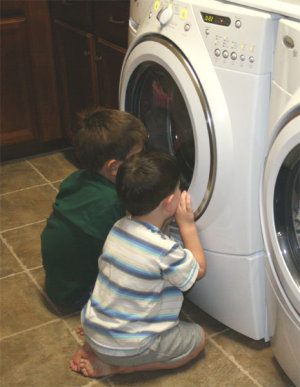 I’m at a volleyball tournament all day and won’t be able to comment until tonight, but tell us about your newest addition to your family, canine, feline, fowl or human!