Three weeks ago, I had a new release: ENTANGLED. It’s a digital-only paranormal/urban fantasy anthology.

All proceeds from ENTANGLED will be donated to the Breast Cancer Research Foundation.  What makes this amazing is that all eleven authors who contributed to the anthology all donated our time and talent to benefit a cause we believe in. No one tossed out a story thinking it didn’t matter because it was for charity; every author took the time to craft a tale to please their readers, as well as new readers. The stories, the cover art, the formatting, the accounting–all donated.

I especially want to single out Stacia Kane for her poignant forward. In part:

“What we can do, though, is hope. We can hope that one day our children or our grandchildren will be able to think of breast cancer the way we think of illnesses like typhoid fever, that once killed thousands but are now essentially eradicated and/or curable. There are doctors and scientists and really scarily smart people out there working hard to try to make that so, to re-write our world so “breast cancer” becomes maybe a little more serious than a cold, but with the same prognosis: Yeah, you might feel kind of tired for a couple of days, but you’re totally going to be fine after that.”

Here’s the summary of the anthology:

HALLOWEEN FROST by USA Today bestselling author Jennifer Estep (author of the Mythos Academy, Elemental Assassin, and Bigtime series) — It’s Halloween at Mythos Academy, but Gwen Frost and her friends are in for more tricks than treats when they run into a mythological monster intent on killing them.

THE FAT CAT by Edie Ramer (author of Cattitude, Galaxy Girls) — In a battle for the souls of seven women, a wizard has the god of war on his side; all the witch has is a fat, black cat.

MEDIUM RARE by Nancy Haddock (author of the Oldest City Vampire trilogy) —What’s spooking the spirits of St. Augustine? As the witching hour of Halloween approaches, ghost seer Colleen Cotton must team with a by-the-book paranormal investigator to locate the one ghost who can save the city’s specters. If she fails, her own great grandfather’s spirit may be lost forever.

SWEET DEMON by Misty Evans (author of the Witches Anonymous series) —When Chicago’s vampire king insists Kali Sweet join his empire, the vengeance demon must rely on her ex – the half-human, half-chaos demon who left her at the altar three hundred years ago – in order to escape the vamp’s clutches.

SIAN’S SOLUTION by Dale Mayer (author of the Psychic Visions series) — When a vampire discovers the human man she loves has been captured and hung in a blood farm, she goes against her own kind and risks everything to save him.

A BIT OF BITE by Cynthia Eden (author of NEVER CRY WOLF and ANGEL OF DARKNESS) — A killer is stalking the streets of Crossroads, Mississippi, and it’s up to Sheriff Ava Dushaine to stop him. But when suspicion falls on werewolf alpha Julian Kasey—Ava’s ex-lover and the man who still haunts her dreams—Ava knows that she’ll either have to prove his innocence…or watch the whole town go up in flames.

SINFULLY SWEET by Michelle Miles (author of the Coffee House series) — When Chloe bakes a little magic into her pastries, she attracts the attention of Edward, the sexy half-demon, half-witch, who’s come to warn her those who murdered her sister are now after her.

A NIGHT OF FOREVER by Lori Brighton (author of A Night of Secrets and To Seduce an Earl) — Who is Aidan Callaghan? Mary Ellen James is intent on uncovering the truth about the mysterious man, but as she soon finds out, some things are best left buried in the past.

FEEL THE MAGIC by Liz Kreger (author of the Part of Tomorrow series) — Jenna Carmichael’s magical attempt to rectify Jessica Manfield’s birth identity takes an unexpected turn when the past comes back to haunt her.

BREAKING OUT by Michelle Diener (author of the Tudor-set historical suspense novel In A Treacherous Court) — Imprisoned in a secret facility, powerful telekinetic Kelli Barrack and two other ‘special’ inmates grab a chance to escape, only to confront their worst nightmares on the outside.

The reviews have been great … All Things Urban Fantasy said: “Like a great buffet, this anthology gives you the chance to taste a little bit of everything. Short and sweet, these stories did a good job drawing me in, setting the hook, and adding books to my to be read pile.” The Good, The Bad and the Unread gave it an A+. And Smexy Books gave “Ghostly Justice” an “A” calling it “dark and gritty.”

If you like paranormal romance or urban fantasy, you can’t go wrong with ENTANGLED. I’m giving away a digital copy of ENTANGLED to one lucky commenter. If you’d like to check it out, you can buy it for your e-reader or computer at Amazon, BN.com, or Smashwords.

And I wanted to share with you one more really cool thing: my friend Philip Hawley, Jr. has digitally released STIGMA, his debut novel, for $2.99. STIGMA first came out in 2007 and I loved it. Philip is a pediatrician and also is an assistant professor of clinical pediatrics at the University of Southern California School of Medicine. I greatly admire his dedication to his career, as well as his talent as a great storyteller. Trust me: you won’t regret reading this book. 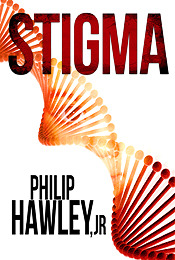 See what others have to say:

“STIGMA is a blast of a read from start to finish. Phil Hawley is the real deal and the thriller world has an authentic new voice.” –John Lescroart, New York Times bestselling author

“Destined to be a classic . . . upon finishing I closed it up and said ‘Perfect!’ ” —Terry Lewis, book critic, The Other View

I’m also giving away a digital copy of STIGMA to one lucky commenter. Check it out at Amazon.

Tell us about the a charity you are passionate about, that you’d donate your time, treasure and talent to support. Remember, two free e-books!