On Amazon
On Audible

If you buy or already own the Kindle edition, you can add audio for just $3.47.

AUDIO IS THE NEW BLACK

The Romantic Times Booklovers convention is one of the biggest conventions I go to all year, and I was surprised this year at how many panels and workshops there were with titles like “Audio is the New Black.” I met up with lots of author friends who have been doing a brisk business in audiobooks through the ACX program, and I thought I’d better blog a little about it here, because this is another potential income stream that authors need to be aware of these days, and ACX is a terrific production and distribution resource. Even if you know exactly zero about audiobook production (that would be me!), the ACX site has streamlined the process into a step-by-step system that anyone can follow to produce a quality audiobook.

ACX has thousands of professional and highly experienced actor-producers already signed up for the program. When you start an audio book, you choose a five-minute segment of your book for actors to audition with and upload that to the ACX site, and specify the qualities of voice that you’re looking for (comic, brooding, spooky, etc.) You choose whether you’ll pay the narrator a flat fee yourself, or do a royalty share deal. Then the project gets posted to ACX’s entire stable of actor-producers, and immediately auditions start coming in. You can also browse for actors yourself by searching vocal and tonal qualities and listening to samples. I was having flashbacks to my directing days as I listened to over three dozen auditions. (I know, yike – but you don’t have to listen to the whole audition to know if a narrator is in the running).

I actually found my terrific narrator, RC Bray, myself, by searching auditions on the site (Bob is also the narrator of the blockbuster audio The Martian, among other titles). I was blown away by Bob’s vocal range (just wait till you hear his reading of Epps!), and the way he’s able to convey theme and suspense in his reading. Bob loved Huntress and signed up to do the book immediately, and he’s such a professional that we had no problem working together by e mail. I could ask him to do something in a slightly different way and he’d instantly get it. I’m thrilled with the book and I hope you audiobook listeners will be, too.

I’ve really enjoyed working on the audio version of Huntress, though I have to warn it’s a lot of work. But ACX’s team was incredibly supportive and helpful – any time I hit a snag or didn’t understand a step in the process, I could contact the support team and get talked through it. I know other authors opt to make audio deals with great companies like Audible rather than taking on production themselves, but I love that I’m now making the lion’s share of profit from this book. I think maybe a mix of self-produced and publisher-produced books might be the way to go, just as a hybrid mix of indie published and traditionally published books can be the most profitable (and manageable!) route for authors these days.

I have audiobooks of Blood Moon and Cold Moon out from Thomas & Mercer, produced by Audible.com and narrated by Bob Bray, but I’m also releasing two more through ACX, Book of Shadows and The Unseen.

I highly recommend that all authors check out the ACX site and read about how the process works. And of course I’d love to hear from others of you who have worked on your own audiobooks! What was your experience?

Special Agent Matthew Roarke thought he knew what evil was.

FBI Special Agent Matthew Roarke is just closing in on a bust of a major criminal organization in San Francisco when he witnesses an undercover member of his team killed right in front of him on a busy street, an accident Roarke can’t believe is coincidental. His suspicions put him on the trail of a mysterious young woman who appears to have been present at each scene of a years-long string of “accidents” and murder, and who may well be that most rare of killers: a female serial.

Roarke’s hunt for her takes him across three states… while in a small coastal town, a young father and his five-year old son, both wounded from a recent divorce, encounter a lost and compelling young woman on the beach and strike up an unlikely friendship without realizing how deadly she may be.

As Roarke uncovers the shocking truth of her background, he realizes she is on a mission of her own, and must race to capture her before more blood is shed.

Audiobooks of Blood Moon, and Cold Moon are also available from Thomas & Mercer/Audible.com

All three of the Huntress books are available in audio, narrated by Bob, and we’re currently collaborating on an audiobook of BOOK OF SHADOWS as well, to be released in early 2016.

One of the perks – or not – of being a spooky thriller writer is that I never have Halloween off. Today and tomorrow I’m teaching/signing at the 805 Festival in Ventura (but I expect some great costumy street action later this evening.

Hope you Nanos are taking the holiday off to celebrate – but I’ll be back tomorrow and throughout next month with prompts for your journey.

In the meantime, being that I AM a spooky thriller writer, I have Halloween sales going on.

Amazon has dropped the price of

Special Agent Matthew Roarke thought he knew what evil was. He was wrong.

Before I turned to crime, I wrote novels that my publisher called supernatural thrillers and other people called horror. So if you’re REALLY in the mood for something spooky:

An ambitious Boston homicide detective must join forces with a beautiful, mysterious witch from Salem to solve a series of Satanic killings.

“A wonderfully dark thriller with amazing “Is-it-isn’t-it?”suspense all the way to the end. Highly recommended.” – Lee Child

Book of Shadows (all territories) 3.99

The Unseen is a haunted house story – two psychology professors take a group of psychically gifted students into a house with a history of poltergeist manifestations, to replicate a controversial experiment from the 1960’s.

I was inspired by the real-life, world famous ESP testing and poltergeist investigations that took place at the Duke University parapsychology lab, headed by Dr. J.B. Rhine.

Five troubled students left alone on their isolated college campus over the long Thanksgiving break confront their own demons and a malevolent presence – that may or may not be real.
Nominated for the Bram Stoker Award (horror) and Anthony Award (mystery) for Best First Novel.
“Absolutely gripping…It is easy to imagine this as a film…Once started, you won’t want to stop reading.”
–London Times
Now in the UK and AU as well as worldwide The Harrowing 3.99

A Boston District Attorney suspects his wife has made a terrible bargain with a mysterious hospital counselor to save the life of their dying child.
“Some of the most original and freshly unnerving work in the genre.”
— The New York Times Book Review
“The Price is a gripping read full of questions about good, evil and human nature… the devastating conclusion effectively leaves the reader with an uncomfortable question to consider: ‘If everyone has a price, what’s yours?’ “
— Rue Morgue Magazine
The Price 3.99
Or – get three books for just 5.99! Haunted: boxed set 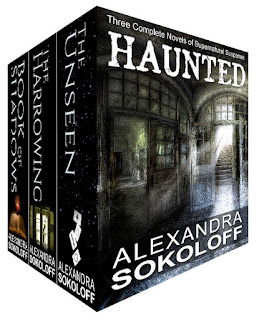 Join me and @RogueWomenWrite tonight for a wonderful virtual event! https://t.co/hGBCVldvjp

What about the grocery store? Haha. And shoes last ... this will still be cute next summer for Thrillerfest! ... You need to treat yourself sometimes. Especially if it's on sale. :)

@Allison_Brennan Having absolutely nowhere to wear this shoe doesn’t mean I shouldn’t get it, right?