One of the questions we writers get all the time is:

“Is your protagonist you?“

I’ve heard a lot of different answers to this question, some long and some short, but I don’t think I’ve ever heard anyone just come out and say what we all know to be true:

Has any card-carrying ‘Rati ever read a Charlie Fox thriller and not seen Zoë Sharp herself doing all that ass-kicking?

I didn’t think so.

Sure, we take pains to disguise ourselves, giving our protagonists attributes we don’t actually share, but we’re in there, all right.  Fiction is a game of pretend, and part of the fun of writing it comes from putting yourself at the center of the action, in the guise of a bigger and better you, facing enemies and dangers larger than you could reliably handle in the real world.  With ourselves as the underlying framework, we build a protagonist built for heroism, endowing him with strengths and powers we either lack altogether, or do not possess in sufficient quantity to tackle the task at hand.

But there’s a limit to this process.  Unless you’re writing pulp, or some kind of retro-crime fiction that harkens back to the days when “realism” was a dirty word, you never want to follow such fantasies to their extreme.  You know what your perfect protagonist looks like, but he’s not anybody you could actually use in a story supposedly grounded in a non-fictional universe.

God bless Ian Fleming.  He got to have his cake and eat it, too, creating the ultimate male protagonist in James Bond, agent 007, at a time when scores of readers were still willing to forgive such laughable affronts to realism, common sense, and the sensibilities of women.  Try writing a series about such an ingenious, indefatigable, sexually flawless protagonist as Bond now and see how many rejection letters you collect.

Still, whether you can use him or her in your fiction or not, it’s always fun to imagine what kind of protagonist you could build were the sky the limit.  Unencumbered by any restrictions suspension-of-disbelief might demand, what would he look like?  What would his powers be?

Or should I say, what would your powers be?  Because your protagonist is really you, remember?

When I created Aaron Gunner, the Los Angeles private investigator I’ve now put at the center of six novels, I drew the line at giving him only one thing my “perfect” protagonist would possess that I, sadly, do not: a red Ford Shelby Cobra, my favorite sports car of all time. 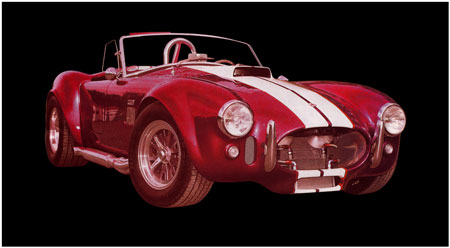 But I could have been much more generous to Gunner than that.

If I were building him according to my own personal wants and needs today, independent of what I thought readers would be willing to buy, this would be his basic profile:

And so on and so forth.  You get the idea.  A ridiculous character, to be sure, but someone it might be fun to be for a day or so, just to see how it would feel.

So what about you, my fellow ‘Ratis?  Using the 10 categories above as a jumping off point, what would the profile of your “perfect protagonist” look like, if suspension-of-disbelief was not a consideration?

14 thoughts on “BUILDING THE (TOO-) PERFECT PROTAGONIST”

@NaomiString @LauraMLippman It really is a lovely and clever little game.