Well, Tess said something apocalyptically frightening in her post on Tuesday:

E-book land is going to be a busy, anarchic universe with a dizzying array of great books sold along with bad books, and lord knows how it’s all going to shake out.

And hanging over us all will be the one thing that could doom us all.  Piracy.  Once books can be copied and disseminated for free, there will be no way to make a living in the writing profession. I fear that it’s only a matter of time before that happens.

And we will look back on this era as the last age of the professional writer.

Thanks, Tess, just what I needed to hear going into a new year.

I guess it’s no big secret anymore that the publishing industry is undergoing a revolution that has us all in shock, awe, fear, or simple paralysis.

One of the components of this revolution is the e reader, as Tess talks about in her post.

At the end of the year, along with my agent, I made the decision to publish Screenwriting Tricks For Authors, the workbook I wrote based on my blog and the story structure articles I’ve posted here at Murderati, at the Kindle store.   It’s now up for sale here. 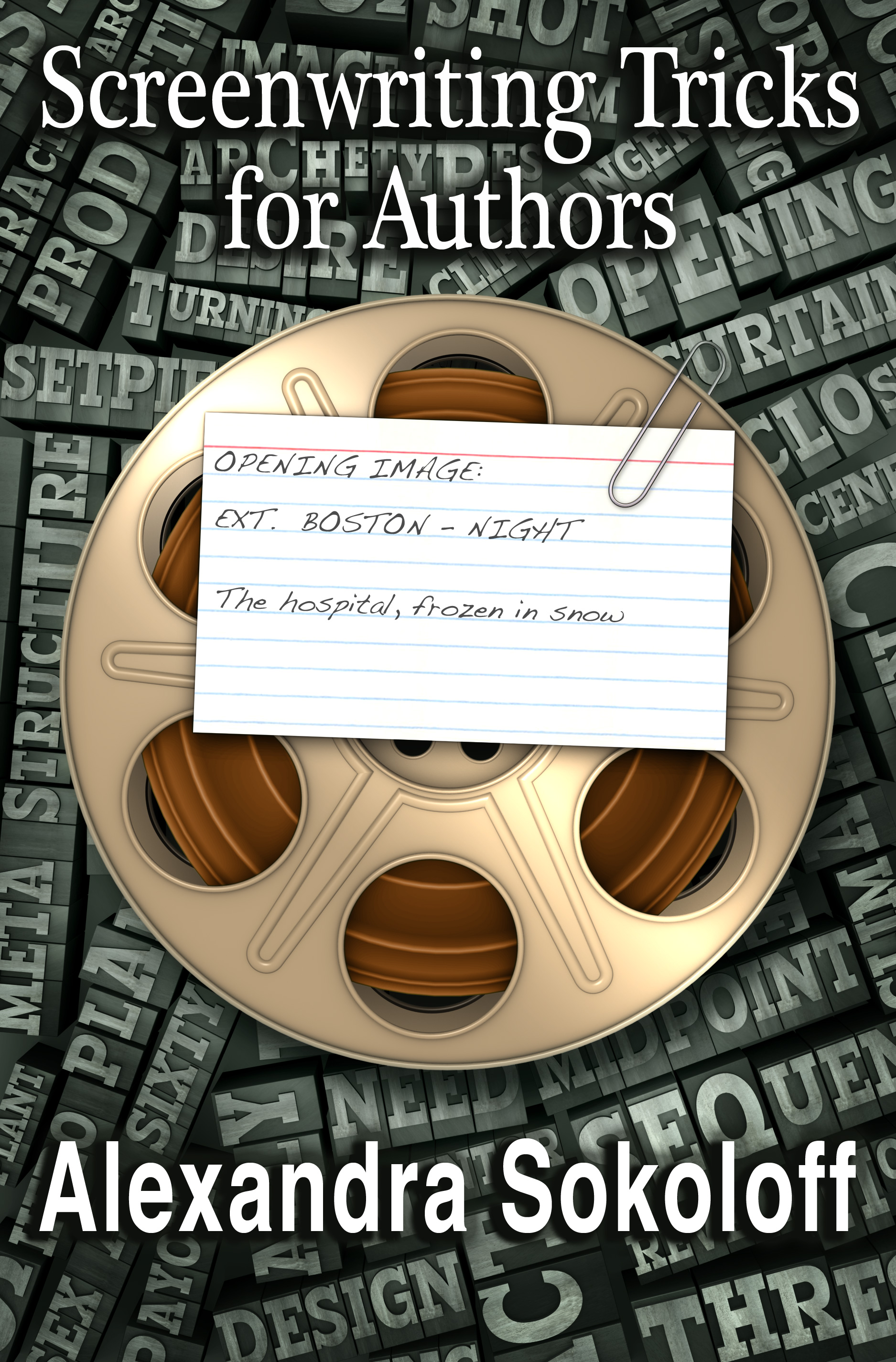 There were a million reasons.   Well, okay, not a million, I just always like the sound of that number, and I’m a Pisces and can’t count to save my life.

But some of the reasons are –

– I TRULY needed to get the information on my blog into a coherent order, and a blog is not the greatest format for what I am trying to convey.

– I’m being asked to teach a lot, these days, and I can’t possibly take the time anymore to print the workbook at Kinko’s for distribution to my students, and when Amazon started making Kindle books available to PC users, and is promising a Mac version imminently, that made Kindle publishing the easiest instant solution.   And a Kindle or PC version is far cheaper for students to buy than a hardcopy version, about a third of the cost.   That part was just a no-brainer.

– I am constantly adding to the info on my blog and with Kindle, you can republish a new version any time, instantly, without cost.   Now that is cool.

– It’s not huge money, but a LOT more in royalties, comparatively, than other options.

– Publishing on Kindle doesn’t tie up other publication rights – if I am offered a good book contract for the workbook, I can just take it.

– Peer pressure from Joe Konrath, who has a lot to say about Kindle and other e publishing, but you could start here.

Really, this is a revolution, and while I’m not personally comfortable publishing a novel on Kindle, at least not yet, I am excited to stick at least a toe in the water by publishing this workbook.   Anyone can take the time and click through links on my blog and get a lot of the same info for free, but if you find what I’ve written on the subject is useful,  $9.99 is not such a huge chunk of change to put down to have the whole deal in coherent order.   Plus, you know, supporting an author whose information you are using is good karma.

So this is a New Year’s experiment, which I’ll keep everyone posted on.  So far the only drawback I’ve experienced is intense complaining from non-Kindle, non-PC (meaning Mac) readers who want the book downloadable or in hardcopy for them NOW.

In the meantime I’ll keep blogging about craft, because God knows it’s exhausting – if not outright terrifying – trying to keep come up with posts on your personal life.

So I’ve been teaching another online class these last two weeks.   NOT the greatest time for an online class, actually, because everyone is still so dazed from the holidays and just trying to get back in the swing of things.   Um… especially me.  Still, I am as always finding the teaching completely inspiring  – I love hearing other writers talk about their stories and characters and writing processes.   And new writers have all that, you know – hope.

The discussion so far has completely reinforced my belief that the best thing that you can do to help yourself with story structure is to look at and compare in depth 5-10 (ten being best!) stories – films, novels, and plays – that are structurally similar to yours.

The late and much-missed Blake Snyder said that all film stories break down into just ten patterns that he outlined in his Save The Cat! books.  Dramatist Georges Polti claimed there are Thirty-Six Dramatic Situations and outlined those in his classic book.

I think those books on the subject are truly useful – as I say often, I think you should read everything.  But I believe you also have to get much more specific than ten plots or even thirty-six.

(I also think it’s plainly lazy to use someone else’s analysis of a story pattern instead of identifying your own.  Relying on anyone else’s analysis, and that for sure includes mine, is not going to make you the writer you want to be.)

For example, in the class that I’m teaching now, without giving details of anyone’s plots, there is a reluctant witness story, a wartime romance story, an ensemble mystery plot, a mentor plot, a heroine in disguise plot.   And others.

Each of those stories has a story pattern that you could force into one of ten general  overall patterns – I guess – but they also have unique qualities that would get lost in such a generalization.  And all of those stories could also be categorized in OTHER ways besides “reluctant witness” or “hero in disguise”.

Harry Potter, for example, is what you could call a King Arthur story – the chosen one coming into his or her own (also see Star Wars, The Matrix…)  but it is told as a traditional mystery, with clues and red herrings and the three kids playing detectives.   It’s also got strong fairy tale elements.   So if you’re writing a story that combines those three (and more) types of stories, looking at examples of ANY of those types of stories is going to help you structure and brainstorm your own story.

If you find you’re writing a “reluctant witness” or “accidental witness” story, whether it’s a detective story, a sci-fi setting, a period piece, or a romance, it’s extremely useful to look at other stories you like that fall into that “reluctant witness” category – like Witness, North By Northwest, The Man Who Knew Too Much, Conspiracy Theory, Someone To Watch Over Me.

If you’re writing a mentor plot, you could take a look at Silence of the Lambs, The Karate Kid, Star Wars, The Empire Strikes Back, An Officer and a Gentleman, Dirty Dancing, all stories in completely different genres with strong mentor plot lines, with vastly different mentor types.

A Cinderella story, well, where do you even start?  Pretty Woman, Cinderella of course, Arthur, Rebecca,  Suspicion, Maid to Order (I think that’s the one I mean), Slumdog Millionaire.

A deal with the devil story – The Firm, Silence of the Lambs, Damn Yankees, The Little Mermaid, Rosemary’s Baby, The Picture of Dorian Gray, Devil’s Advocate.

And you might violently disagree with some of my examples, or have a completely different designation for what kind of story some of the above are…

But that is exactly my point.  You have to create your own definitions of types of stories, and find your own examples to help you learn what works in those stories.   All of writing is about creating your own rules and believing in them.

When you start to get specific about that, that’s when your writing starts to get truly interesting.

So what kind of story ARE you writing?  Would love to hear some, and brainstorm some great examples.

Have a great holiday weekend, everyone!

What is High Concept?