Bouchercon By The Bay starts today in San Francisco, and I’m not there, dammit. 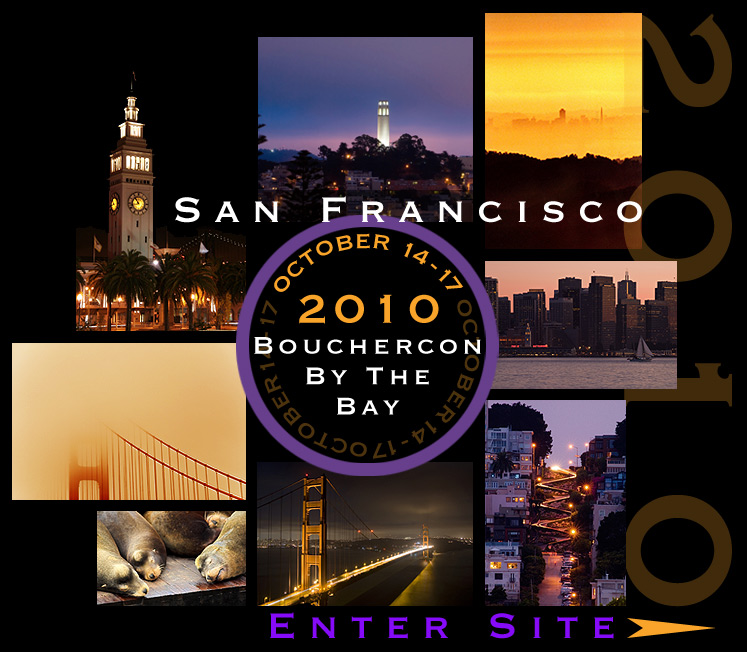 Sometimes, you have to weigh up want against need, and right now I need to be concentrating on the book I’m in the midst of, and the copyedits for the next book have just landed, and the outline for the next one is still only a vague murky idea. In short, there are a hundred and one jobs that made a transatlantic trip just not feasible at the moment.

I made the mistake of looking at the list of attendees, and see the names of so many people I would love to have hung out with, not least of which are my ‘Rati colleagues. Another thing I noticed is there are very few people I’d leave the bar to avoid. And it reminds me, if I needed reminding, what a great community this is to be a part of.

So, because I’m a masochist at heart, I started thinking about all the aspects of a convention that I enjoy so much, and what I was really going to miss.

Obviously, meeting with people we know. The crime writing crowd are overwhelmingly smart and funny, and I genuinely enjoy their company.

Meeting with people we don’t know – yet. Finding a new mind in tune with your own is always a joy.

Meeting ‘the man behind the curtain’ (as per Louise’s blog from Tuesday) and NOT being disappointed. I first met some of the biggest names in the business at conventions or festivals, both here and in the States and found that in the majority they’re delightful.

I love to meet readers. First and foremost, I’m a reader. I got into this because I loved books, loved to read books, and went that step further and then wanted to write stories that other people might want to read. But the reading came first, and without satisfied readers, we’re talking to ourselves.

What else? Fascinating panels, the undiscovered gems that often come out of the book bag, the charity auction.

That last one might sound odd, but I have been lucky enough to be able to auction off four character names either at Bouchercon or at Mayhem in the Midlands in Omaha Nebraska. One of the four turned into five, as I included both the winning bidder and her late mother. I just happened to have a slot in the next Charlie Fox book for mother and daughter characters. And, again, looking at the list of attendees for San Francisco, I see that three of those generous bidders – Frances L Neagley, Terry O’Loughlin, and BG Ritts, are all going to be there.

And I’m not, dammit.

Of course, although the whole point of going to a convention is to BE at the convention, not off sight-seeing, there is usually the opportunity for a side trip to a gun range while we’re there. Watching people who’ve never handled a gun before having their first shot at it (pardon the pun) is always entertaining. And then there’s the occasion when I put a trip to the gun range up as an auction prize, and the lady who made the winning bid had been blind since birth.

But that, as they say, is another story… 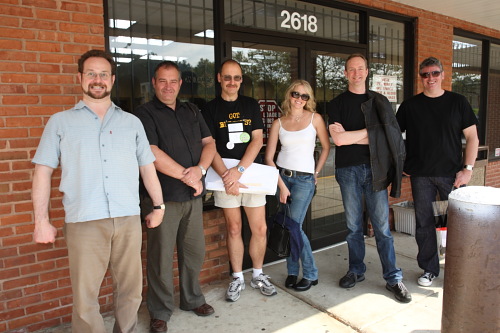 Here’s a group of us taken after our foray in search of firearms in Baltimore. I don’t know quite what just happened to Stuart MacBride, but I’m open to suggestions.

OK, so now I’m completely grumpy and naffed off that I’m not at Bouchercon, and in order to prevent bottom-lip-out overload, I have to think about the things I DON’T like about conventions.

Watching badly moderated panels. I’ve seen a few in my time. Like the one where the moderator asked questions of the panelists in the same order ever time, so the poor woman at the far end was left with nothing to add to every question. Or the one where the moderator did not-very-funny stand-up for the entire duration, and one panelist didn’t actually get to speak at all.

Rude panelists. I’m fortunate to have moderated only one of these, but her name will stick in my mind forever. For entirely the wrong reasons.

Being landed with the bill for everyone else’s cocktails at a group meal. OK, OK, as a teetotaller, I’m aware that I’m always going to end up paying extra at a group meal – it’s the price you pay for going out in company, and if you don’t like it, you should eat alone. But do these people never stop to wonder at how little it seems to cost them to eat and drink at a convention? The indomitable Sally Fellows had this nailed at Mayhem. Every time we sat down in a restaurant, her first words to the wait staff were, “Separate checks, please.” If nothing else, it makes my accountant’s life easier.

Air con red-eye. Maybe I should be blaming all the late nights in the bar, but I always seem to end up with dreadful  bloodshot eyes at conventions, which I put down to the fact that Brits are not used to being in air-conditioned buildings. If it wasn’t for eye drops, I’d permanently be walking round with eyes like this: 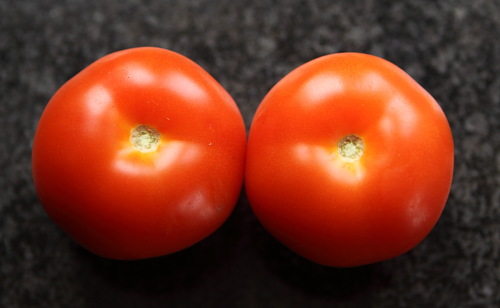 Bad manners. And this is another one where I appear to contradict myself. I DO love talking with people, but that’s different to being talked AT by people. And I’ve lost count of the number of times you can be in mid-sentence and someone else just comes up and jumps into the middle of the conversation. They don’t want to join in – they don’t even want to let you finish what you were saying before they take the plunge. It’s like being ambushed.

OK, so your turn. What do you love or hate about conventions? What’s the best question you’ve heard on a panel? Or the worst?

This week’s Word of the Week is epitome. The most common modern use of epitome is to mean excellence, the best example, as in ‘she is the epitome of elegance’- a person or thing that is typical of or possesses to a high degree the features of a whole class. But its fundamental meaning is a condensed account, a summary, especially of a written work. Its root is the Greek epitome, to cut short, abridge. In theory, a précis encapsulates the best of the original work, although (as most authors are aware) this is not necessarily the case…